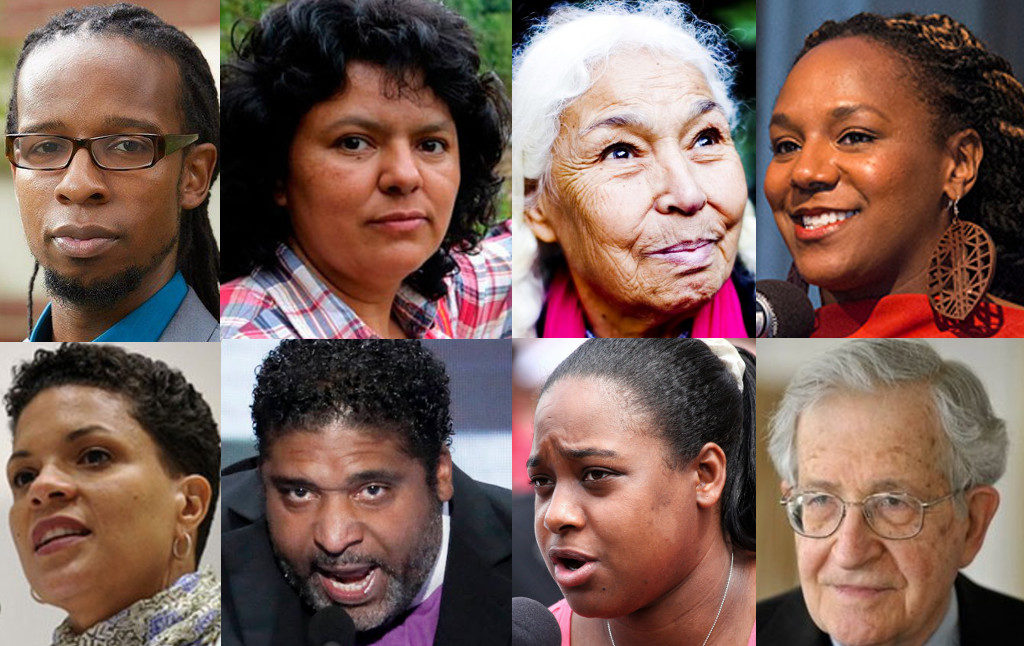 I keep noticing something peculiar lately: Even though I seem to hear constantly about the members of the “intellectual dark web” and their war on the Social Justice Identity Politics Regressive Left, I never seem to hear very much from the Social Justice Identity Politics Regressive Left itself. I know that assertion may sound a little dubious: Surely we hear all the time about White Privilege, rape culture, gender as a social construct, etc. And yet: There are dozens of well-known critics of social justice activists: Harris, Shapiro, Peterson, Brooks, Stephens, Hoff Sommers, Weinstein, Weinstein, Murray, Murray, Rogan, Chait, Haidt, Pinker, Rubin, Sullivan, Weiss, Williamson, Yiannopoulos, Dreger, Hirsi Ali. Who are their equivalents among the Social Justice Types? Who has their reach or prominence?

I recently pointed out the irony that the supposedly suppressed anti-“political correctness” position is represented at length in numerous books, op-eds, YouTube shows, and TV interviews. But it’s worth noting the other half of this: The social justice position itself is often presented to the public through the voices of its critics rather than its adherents. It’s downright peculiar: When Jordan Peterson talks about “postmodern Marxists” we don’t really hear who they are (other than Adorno, who is dead). When David Brooks or Scott Alexander have written about the silly ideas of racial justice progressives, they have done it by imagining what the activists would say, or paraphrasing. Steven Pinker’s Enlightenment Now strongly criticizes “social justice warriors” for their notions, but while he explains their beliefs he doesn’t really tell us who in particular he’s talking about.

The “SJWs” often come across as an amorphous, irrational, angry blob, which is undoubtedly how many of their critics see them. For the most part, they don’t seem to have names. I guess there’s Linda Sarsour; I’m told she’s one of them. But I don’t actually hear much from her, even though I can watch a video telling me why she’s a “complete idiot and a vile disgrace” (600,000 views!) or watch Dave Rubin interview someone who is not Linda Sarsour about how terrible Linda Sarsour is. This is strange, not because people who fit the conservative caricature of leftists don’t exist (they do; I’ve met one or two), or because the “anti-free speech” and “irrational” currents of progressivism are a fabrication (I’ve written about them), but because the right’s narrative is that the leftists are the ones who control the culture. If that were true, I would imagine I’d hear Colin Kaepernick talking all the time. But I’m not even sure I even know what Colin Kaepernick’s voice sounds like. Again, though, I could watch multiple interviews in which Dave Rubin talks to people about Colin Kaepernick.

I want to suggest a hypothesis that may sound outlandish: What if the whole narrative is backwards? What if people who think they are voicing suppressed dangerous ideas are actually the ones suppressing the truly dangerous ideas? What if this effort to condemn the irrational excesses of political correctness is in part a way of avoiding having to engage with its arguments and listen carefully to its advocates? What if people who seem to be “challenging” a dissent-stifling power structure are actually defending one? Now, I’m not saying this is the case; I’m just asking some questions. But let’s, for a moment, because we are rational and skeptical, consider the possibility that the conservative narrative is totally upside-down. Let’s picture a topsy-turvy world in which Donald Trump is the president and left ideas are actually marginal. Stretch your powers of imagination and consider the following hypotheticals:

I know, it’s all such a mad delusion. You’d have to be a conspiracy theorist to believe it all. But don’t worry, it’s only a thought experiment. I’m just asking us to imagine a strange world in which the interests of the wealthy mattered far more than the interests of the poor, and in which the good people got left behind while the bad people were honored and celebrated. But let’s stick with the idea, just a moment longer. In this kind of world, what would we make of people like the members of the “Intellectual Dark Web,” who insist that their ideas pose a challenge to the mainstream consensus? Well, first we’d have to look at the ideas themselves. But if those ideas turned out to coincide remarkably well with the interests of those who are already wealthy and powerful, and if those ideas seemed to downplay, deny, and evade all of the contrary evidence, we might begin to suspect that these Dissident Intellectuals should not, in fact, rightfully be considered dissidents. In this kind of world, the real dissidents would be the ones whose names we didn’t know, the ones who were trying to dredge up the truths nobody wanted to listen to, rather than the people whose faces and opinions were constantly in the newspapers. The dangerous ideas would be the ones that weren’t spoken from the White House and on cable news, because they actually indicted those institutions rather than benefiting them.

We can easily understand why the media obsessed over every last absurd thing Donald Trump does, and doesn’t pay any attention to violence in Mexico. Donald Trump is fun to read about, he’s fun to hate. The hierarchy of victims is not a conspiracy, it’s a quite accurate metric of predictable audience interest. Why do we hear more about Scott Pruitt’s soundproof box than the Palestinians shot by Israeli snipers? For a number of reasons: it’s more entertaining, it’s less miserable, most of us implicitly devalue Palestinian lives, and the U.S. is pathologically committed to supporting Israel no matter how many times it may violate international law.

There are explanations, then, for why hear so goddamn much about the Crazy Campus Activists and their Social Justice, despite rarely even hearing from a named campus activist, and despite the fact that it’s a totally overblown controversy largely confined to a few elite liberal arts institutions. Bashing millennial identity politics gets lots of clicks and views from angry white guys, it’s a delicious controversy to read about, and it’s fun to make fun of kids who think the dining hall sandwiches are cultural appropriation. But it should be obvious that these are not “dangerous” thoughts. They do not threaten those with economic, political, or military power. They target 19-year-old Oberlin kids, and 19-year-old Oberlin kids do not control the world. Instead, our world is largely ruled by callous and hypocritical people like Donald Trump, Mitch McConnell, Andrew Cuomo, Dianne Feinstein, Theresa May, Kim Jong Un, and Ted Cruz. (Yes, the levels of evil vary.) Sometimes you get a seemingly nice guy, like Barack Obama, but in order to get to the top they can’t pose a serious threat to the powerful.

The intellectuals who point these things out do not get included in mainstream discourse. Norman Finkelstein was kicked out of the academy, while the far less intelligent and much more dishonest Alan Dershowitz had life tenure at Harvard. (So much for radical academia!) The names of those who bash social justice are far better known than the names of those who defend it, and critical black intellectuals are erased to the point where someone like Sam Harris doesn’t even appear to be aware that they exist. Show me a news network that spends more time talking about the bombing of Yemen than Michael Cohen, and I will reconsider my assessment of which topics get priority. To be sure, the left has made progress in exposing things as they really are, and America’s culture is far more progressive now than fifty years ago. Christopher Columbus’s reputation is a bit tarnished these days and someone like Ta-Nehisi Coates can successfully force the National Review to acknowledge the racial wealth gap. But so much suffering is still ignored, so many lies still pass for common sense.

It’s important, of course, to talk about why people like Bari Weiss are so full of crap when they imply that Jordan Peterson—one of the world’s least silent men—is being suppressed and pushed out of mainstream discourse. But it’s even more important to remind people which views aren’t heard, which truths do get buried, and what the “dangerous” ideas truly are.