The Case Against Deporting Criminal Aliens 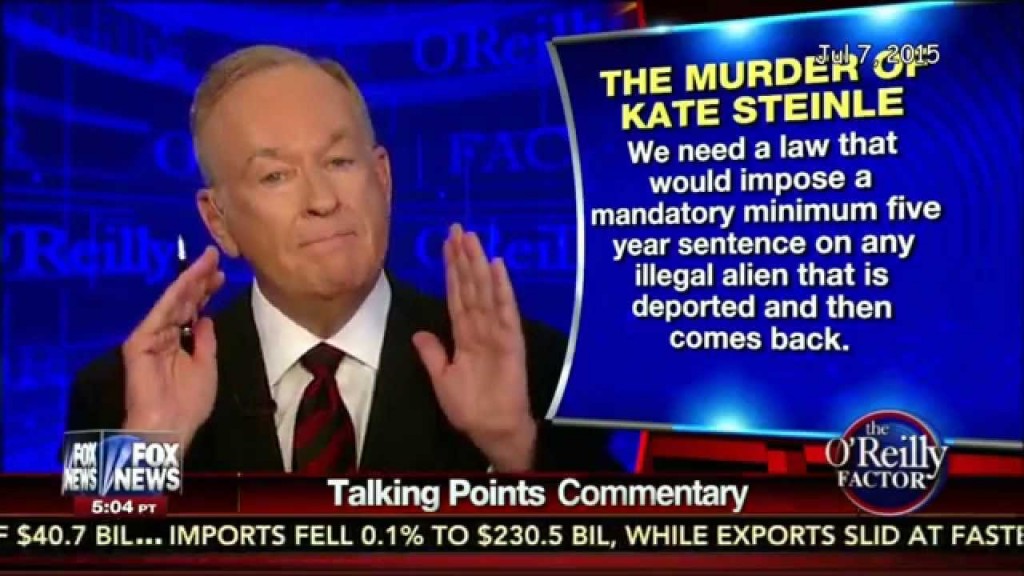 Liberals and conservatives alike speak in favor of deporting criminals. But all that means is wishing crime on other countries.

After Kathryn Steinle was killed in San Francisco on July 1st, her death took on a potent role in the American immigration debate. Steinle was killed by an unauthorized immigrant, Francisco Sanchez, who had been deported five times previously and had seven felony convictions. Despite his criminal background and unlawful immigration status, the San Francisco sheriff’s office released him in April, in accordance with their longstanding practice of refusing to enforce U.S. immigration laws.

Because Sanchez had been deported so many times, and because he was a felon, Steinle’s death was portrayed as a strong indictment of the San Francisco “sanctuary city” policy. Conservatives argued that this was a perfect example of what lax immigration enforcement leads to: as a direct result of the city’s actions, an innocent 32-year-old woman is dead.

The Steinle case is an uncomfortable one for liberals. After all, they’re met with a fearsome challenge: how can Sanchez’s release be defended given his subsequent actions? And if they do not believe Sanchez ought to have been released, then why do they continue to promote sanctuary city policies? With Steinle’s grieving family begging for the policies to be changed, those who support sanctuary cities have a hard time answering questions about the potentially deadly human consequences.

Attempts on the left to answer these questions have been extremely weak. The ACLU’s Hector Villagra, in the Los Angeles Times, said that while the killing was tragic, to deport Sanchez would have required violating the Fourth Amendment. Jose Vargas said on FOX News that ICE should have issued a warrant for Sanchez’s arrest.

These arguments won’t persuade many. Conservatives will reply that if the ACLU’s theory of the Fourth Amendment precludes deporting criminals, it’s time to for the ACLU to start interpreting the Constitution like an originalist would. And FOX host Megyn Kelly reduced Vargas to stutters when she pointed out that San Francisco’s policy was specifically designed to flout federal law.

One reason that both Vargas and Villagra have trouble defending their policy positions is that they both nominally accept the legitimacy of current federal immigration law, and do not dispute the premise that dangerous criminal aliens ought to be deported. The wisdom of deporting criminals has been accepted by almost all parties in the immigration debate, even those who support massively easing present-day restrictions and allowing new paths to legalization. Immigration reformers consistently pitch their proposals as being oriented toward hardworking migrants who seek the American Dream; hence the DREAM Act, and the “deport felons not families” rhetoric. Thus, these reformers are in a tough spot when speaking in favor of sanctuary cities, which are naturally in tension with the goal of deporting felons.

But the argument for deporting criminals needs to be re-examined to begin with, since it is not as rock-solid as the consensus makes it appear. In fact, it is based on some deeply ugly premises.

It’s important to remember, first, that deported individuals do not simply disappear into nonexistence. They are sent to another country, often one to which they now have little connection and in which they face a fight for survival. This means that in the case of someone dangerous who poses harm to others, deportation does nothing to prevent crime. Instead, it simply shifts it someplace else. Deportation advocates may believe they are saving lives, but they’re doing nothing of the kind. They’re simply attempting to have residents of other countries be the victims. Saying we wish Francisco Sanchez had been deported is simply tantamount to saying we wish he had killed someone in Mexico instead. It would indeed be extremely difficult to look Steinle’s devastated family in the eye and say that Sanchez deserved to stay. But there’s another family out there: the family of the individual Sanchez might have killed had he returned to Mexico. It would be equally difficult to tell them why their daughter ought to have died instead. Sending Steinle’s killer to Mexico would have saved her, but at someone else’s expense.

This isn’t simply theoretical. Sending wave after wave of criminals to Mexican border cities wreaks violent havoc on them, and makes the precarious task of local governance even more difficult. In fact, deporting criminals may lead to even higher ultimate costs in human lives and suffering than allowing them to stay: those who are sent to cities they know nothing of, sometimes without even capable Spanish speaking skills, may well turn to crime. Furthermore, the U.S. criminal justice system is almost certainly better-equipped than the struggling Mexican government to deal with acts of violence. No matter how little sympathy there may be for criminal wrongdoing, the harm to victims of criminal deportees should be assessed before we congratulate ourselves for having made anything safer.

There is another problem with the consensus on deporting “dangerous” aliens. It is very easy, in retrospect, to see Sanchez as a risky individual who should not have been walking the streets. But as far as we know, Sanchez had served his full sentence for his previous criminal convictions. ICE wished to deport him because he was here illegally and had a criminal record, not because they had notice of a particular ongoing threat he posed. But having a criminal record isn’t the same as being a wanted criminal. People who have served their sentences are supposed to be free, because that’s the entire purpose of a limited-duration criminal sentence. As much as we might wish to imprison killers before they kill, introducing Minority Report-style anticipatory prosecution would be both impossible and terrifying. People must be held accountable for acts they have committed or attempted to commit, not simply acts they may be statistically more likely to commit based on their demographic characteristics.

Conservative critics have a response to this argument. They believe that immigrating illegally should itself be a more heavily-penalized crime, regardless of the individual criminal history of aliens. Claiming to be honoring Steinle’s memory, Bill O’Reilly began pushing for the adoption of what he calls “Kate’s Law,” a mandatory five-year prison sentence for anyone who returns illegally to the U.S. after being deported.

But those advocating this kind of response concede that they are more interested in punishing immigration violations than in protecting public safety. Even the Wall Street Journal has pointed out that immigrant crime rates are well below that of native-born Americans, citing research from the Immigration Policy Center which concluded that “for every ethnic group without exception, incarceration rates among young men are lowest for immigrants,” a statistic that “holds true especially for the Mexicans, Salvadorans, and Guatemalans who make up the bulk of the undocumented population.” If O’Reilly is truly interested in stopping crime, imprisoning immigrants for immigrating is a disastrously wrongheaded tactic. In fact, given the crime rate disparity, it would be more effective to imprison all U.S.-born citizens; after all, large numbers of crimes are committed by citizens every day.

Criminals already account for a very large percentage of President Obama’s deportations. After the killing of Steinle, pressure is likely to mount to deport more of them. Democratic presidential contender Martin O’Malley has said that the death proves ICE needs to “step up its game” and make sure that “threats to public safety” are removed. And the USA Today editorial board called for eliminating sanctuary city policies altogether, in order to better facilitate ICE enforcement.

The left/right consensus on the deportation of criminals is understandable. After all, nobody wants to support the idea of letting dangerous strangers wander freely, especially not after a tragedy. But deportation is not a remedy. It is a classic example of a solution that appears to solve a problem, without actually solving it. Exporting crime to Mexico is only a safety measure so long as we can keep the victims out of mind. Furthermore, deporting those who have served their sentences as “risky” involves accepting the totalitarian logic of punishing future crimes. If we accepted such a theory of justice, there would plenty of citizens who ought to be imprisoned long before we started on unauthorized aliens.

Ultimately, it is criminal law, not immigration law, that should determine what the sentence is for a criminal act. If Sanchez served his sentence on his felony charges, he was entitled to be a free man. That truth isn’t comforting. Conservatives have no tolerance for criminal immigrants, and liberals would like to prove that sanctuary city policies will not result in the safe harbor of people who go on to commit crimes. But crimes are often committed by people who are perfectly entitled to be free, and that fact will not change without both accepting the nightmarish logic of jailing future criminals and embracing deportation’s role in creating new victims of violence in Mexico.