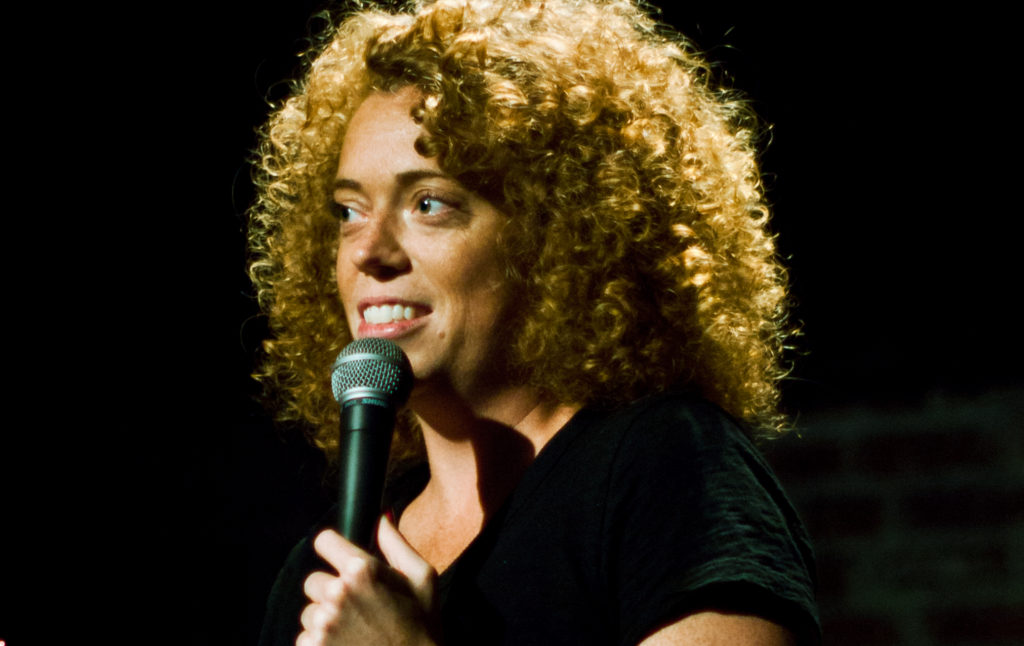 Liberal feminist politics are not incompatible with “offensive” humor. It just depends on who you’re offending…

For decades, conservatives have moaned about “political correctness.” Supposedly the left can’t take a joke. Liberals are too afraid of offending people, and as a result they become humorless, because humor is supposed to be edgy and transgressive. Milo Yiannopoulos’s whole schtick was based on the idea that feminism has sucked the fun out of life by getting upset about jokes. Jerry Seinfeld declared that he would never play a college campus because the social justice mentality means you just can’t say anything anymore.

But if feminism means you’re not supposed to say anything controversial or offensive, somebody forgot to tell Michelle Wolf. Wolf’s deliciously filthy monologue at the White House Correspondents Dinner appalled the D.C. establishment from the New York Times and MSNBC to the president himself. She said brutal and scandalous and hilarious things. She was so “politically incorrect” that the head of the Correspondents Association had to apologize that Wolf’s routine didn’t “honor civility” or offer a “unifying message.” And yet Wolf’s routine was also from a defiant liberal feminist perspective.

Wolf’s jokes were classic examples of “punching up” at the powerful rather than “punching down” at the weak, which is why the Washington elites she targeted were so scandalized. A sample of some lines:

Wolf said a lot of things that made people gasp, because they couldn’t believe she had the gall to go there. She called Trump “the only pussy you’re not allowed to grab” and called Mike Pence a “weird little guy” who is “what happens when Anderson Cooper isn’t gay.” But notice, too, that her jokes had strong underlying politics. Her closing line about Flint pointed out how grotesque it is that the political class can sit congratulating itself while the people failed by that class continue to suffer. The previous joke about immigration highlights the human consequences of Donald Trump’s cruel policies. Racism, sexism, underfunded schools: The targets of her jokes are deadly serious. She points out how absurd it is that a pedophile nearly got elected to the U.S. Senate. It’s funny, because it is absurd, but it’s also horrifyingly true, and Wolf wanted the people at that dinner to look in the mirror and see not just how ridiculous, but how disgusting their world is.

Watch Wolf’s 2017 HBO Special, Nice Lady, and you’ll find many more examples of jokes that are based on a clear feminist worldview but are no less crude/offensive/shocking (or hilarious) for it. At various points, she talks about: Bill Cosby, menstruation, scrotums, abortion, assassinating the president, Caitlyn Jenner, male nipples, yeast infections, and bestiality. (“When gay people wanted to get married, you were like ‘We can’t let that happen because then they’re going to start fucking dogs.’ Yeah, you only ever said that because you thought about fucking a dog.”) She chastises America for being mean to Monica Lewinsky given that Lewinsky was such a nice lady that she declined the opportunity to bite off the president’s penis. She makes jokes about rape, but they’re not jokes at the expense of rape victims, they’re jokes at the expense of rapists. (Scottish comedian Frankie Boyle usefully distinguishes between the “subject” of a joke and the “target” of a joke.) Wolf’s mixture of provocation and principle is captured well in a short bit about Hillary Clinton. She seems, at first, like she’s criticizing Hillary rather viciously. But it’s actually pretty sympathetic:

I do have a theory on why Hillary lost. I think it’s cause no one likes her… You shouldn’t like Hillary. She’s a bitch. You have to be a bitch to be that powerful. We’re never gonna have a nice lady run for president. Nice ladies aren’t in charge of things. And if you’re in charge of something, and you think you’re a nice lady, no one else does. There are whole email chains about how much you’re not a nice lady. Hillary is not nice. She’s not fun. She doesn’t go to brunch. She eats like a hard-boiled egg in the morning and then nothing the rest of the day. She doesn’t even peel it, she just squashes it in her fist. She gets hungry in the afternoon and then slaps a man and goes ‘Full now.’

Wolf starts by saying that “no one likes” Hillary, but she also illuminates the context that makes women have to become tough in order to succeed. (The next part of Wolf’s act is a defense of “shrill voices.”) She’s able to do something remarkable, namely make fun of the aspects of Hillary Clinton that deserve mockery (e.g. not going to Michigan) while defending Clinton against sexist charges of being “shrill” or “not nice.”

Wolf is similar in her treatment of feminism generally. She staunchly defends militant political feminism, while taking jabs at the kind of politics that she finds superficial and unfocused:

There’s some feminists that are like “We want to be in charge of stuff, and we want to get paid the same” and there are some feminists that are like “we want to free the nipple on Instagram.” It’s like hey, can we focus? …Just logically, if we focus our attention and power on one thing, we’re much more likely to get it accomplished. So personally, I think we should go after equal pay. But if all the women voted and we got on the same page and we wanted to go after nipple, fine. I’ll fight nipple. I’m a team player. It’s just hard for me to even believe that that was a woman’s idea. Sounds like a man infiltrated a meeting…

But there is no doubt as to where Wolf stands. In a rapid-fire monologue on the conflicting imperatives that young mothers face, she exposes the absurdity of the demands America places on women:

Oh, congratulations, you’re having a baby, great. Couple things: We’re gonna need you to get that car accident of a body back to work as soon as possible because this is America and we don’t think you need time to recover. Also you should breastfeed, it’s what’s best for the baby. But don’t do it in public, you pig, do it in the old janitor’s closet under the bridge with the rest of the breast-feeding trolls. And don’t ask to take time off from work when your kids are sick, we’ll think you’re not dedicated. Also why are you such a bad mom? By the way, your salary is just enough to cover the cost of child care. And we know you’re exhausted and you don’t really know who you are anymore and you’re trying to balance your old life and your new life but quick, go have sex with your husband, he’s about to leave, he doesn’t understand what you’re going through, QUICK GO NOW, and, SWEETIE, SMILE!

I think Nice Lady is a brilliant TV special, and I could not stop laughing at a bit about how it’s easier to make a human being than to make a croissant. (And how much better it would be if sex could accidentally produce croissants instead of accidentally producing babies.) But even if you don’t actually like Wolf’s style or humor, she very clearly demonstrates that there’s nothing about liberal feminism that means you can’t be offensive or boundary-pushing. People who insist that “political correctness” means a stifling of the right to “be offensive” are being imprecise. In fact, they are upset that they can’t make jokes at the expense of the powerless and marginalized, that there’s less tolerance for humor that rests on cruel stereotypes about people of color, women, disabled people, queer people, and fat people. (Though Wolf did make a fat joke about Chris Christie, which is arguably more acceptable since it’s at the expense of a powerful person. I am sure this can be debated.)

It was fun watching people like Maggie Haberman and Mika Brzezinski publicly announce how appalled they were after Wolf told some jokes about their industry, and her routine was obviously the best White House Correspondents’ Dinner since Stephen Colbert’s infamous appearance. It’s a gross event, and it’s only ever good when the attendees get mercilessly roasted. But there is an even more important conclusion to draw from Michelle Wolf’s comedy. It helps us see through the lie about political correctness, this idea that feminists are trying to kill humor. They’re not trying to kill it. They’re trying to turn it against the people who deserve to be its targets: the Trumps and Weinsteins and Cosbys and Moores of the world. And those people aren’t upset because they value edgy humor, but because they want humor that bullies the powerless rather than exposing the grotesque immorality of the powerful. The cult of “civility” is the real “political correctness,” the stifling consensus that prevents us from telling the truth about the people in charge.