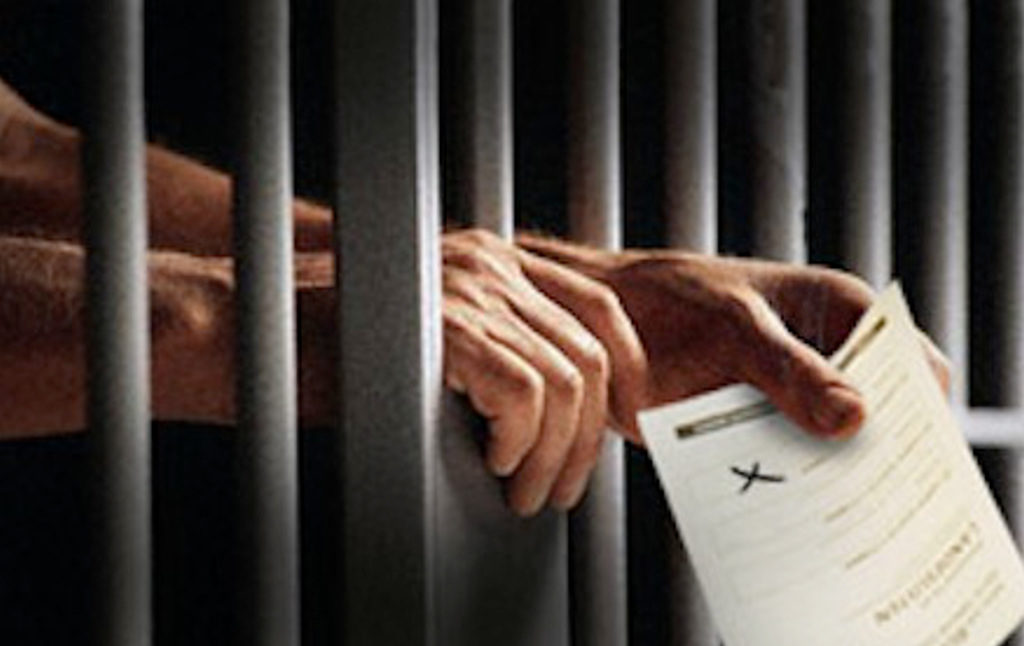 If we want to live in a democracy, we have to have universal suffrage. Period.

In the United States, giving prisoners the right to vote is not an especially popular idea. Less than one-third of Americans support it, and only Vermont and Maine allow voting by the incarcerated. The Democratic Party does not advocate it; in their 2016 platform, which was widely considered very progressive, the party promised to “restore voting rights for those who have served their sentences” but did not comment on those who are still serving their sentences.

But why should letting prisoners vote be such a fringe position? In a new report from the People’s Policy Project, entitled “Full Human Beings,” Emmett Sanders argues that universal enfranchisement should mean exactly that: If prisoners are still full human beings, then they cannot rightfully be excluded from the democratic process. No matter how much people might instinctually feel that someone has “sacrificed their rights through their conduct,” we shouldn’t strip the basic elements of citizenship from someone merely because they have committed a wrong.

Many other countries recognize this. The Universal Declaration of Human Rights states that “everyone has a right to take part in the government of his [sic] country” and the International Covenant on Civil and Political Rights provides for “universal and equal suffrage.” In many European countries prisoners can vote, and the European Court of Human Rights repeatedly condemned the United Kingdom’s ban on prisoner voting. (The U.K. government ignored the ruling for years before settling on a weak compromise.)

The argument against prisoner voting is simple (one might even say simple-minded). Sanders quotes an opponent: “If you won’t follow the law yourself, then you can’t make the law for everyone else, which is what you do – directly or indirectly – when you vote.” But as Sanders points out, in practice this means that stealing a TV remote means you’re not allowed to express your preference on war or tax policy or abortion. The argument rests on collapsing “the law” into a single entity: Because I violated a law, I am no longer allowed to affect any law, even if the law I violated was relatively trivial and the law I’d like to oppose is, say, a repeal of the First Amendment. And, tedious as it may be to pull the Martin Luther King card, if we’re going to argue that “not following the law” is the criterion for disenfranchisement, well, civil disobedience would mean getting stripped of the basic rights of citizenship.

Sanders points out that the impact of America’s prisoner disenfranchisement policies is immense. This is, in part, because of our obscene number of prisoners: 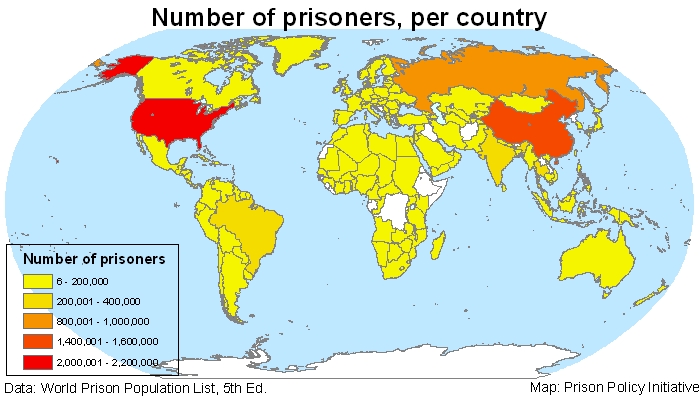 That means that elections outcomes could very easily be swayed by the enfranchisement of prisoners. (Though obviously this is a good reason for the Republican Party to staunchly defend existing policy.) But it also affects the distribution of representation in other ways: Because the census counts prisoners as being resident in the location of the prison, rather than at their home address, population numbers are artificially inflated in rural areas and deflated in urban ones. In extreme enough quantities, this can affect how state voting districts are drawn, even though the populations being counted can’t actually vote.

The racial dimensions of this become extremely troubling. First, we know that because the 13th Amendment contains a loophole allowing people to be enslaved if they have been convicted of a crime, white supremacists gradually reasserted their power by aggressively policing black people in order to deprive them of their rights. There is a disturbing historical precedent for stripping rights away from those convicted of crimes, and Sanders cites an old Mississippi court ruling that even though the state was “Restrained by the federal constitution from discriminating against the negro race” it could still “discriminate against its characteristics, and the offenses to which its criminal members are prone.” You can’t take the vote away from black people, but you can take the vote away from criminals, and if the prisons just so happen to end up filled with black people, it is a purely innocuous coincidence.

The racial impacts go beyond the specific deprivation of those currently incarcerated. The political representation of black communities as a whole is reduced by the disenfranchisement of a large swath of their populations, and people who have never been given the chance to cultivate the habits of voting and civic participation are less likely to pass those onto their children. Everyone should be troubled by the specifically racial effects of this policy, given the historical context and the extreme numbers of people the U.S. has incarcerated and thereby deprived of a democratic voice.

It is disappointing that the Democratic Party has not stood up for universal suffrage. Obviously felons should have their rights restored upon completing their sentence. (One opponent says that since we restrict felons from having guns we can restrict them from having votes, but a gun is generally far more obviously dangerous than a vote, unless the vote happens to be for Donald Trump.) But the broader point is that there shouldn’t be moral character tests for voting, period. We live in a country where people do things wrong. When they do things wrong, they are punished. But they do not thereby become “non-people” who lose all of their basic rights and obligations. (Voting can be thought of as an obligation as well as a right, which makes it even stranger that prisoners are kept from doing it. Do people vote for pleasure?) The left should take a very simple position on suffrage: Universal means universal.