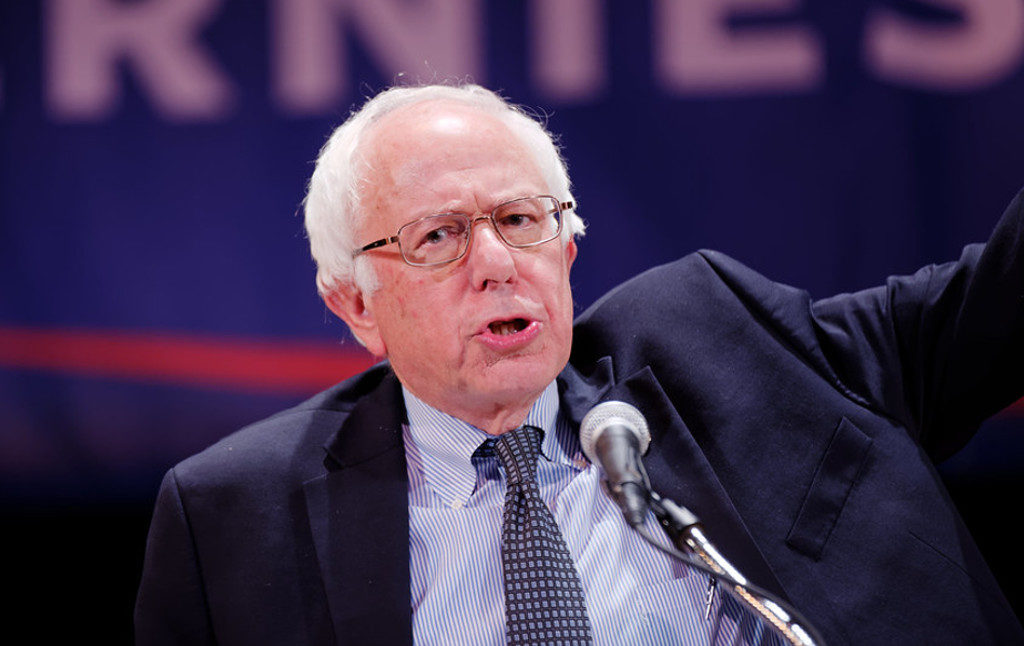 Oh yes we are…

Don’t take it from me. Take it from Karl Rove, who writes in the Wall Street Journal:

[W]hen only 37% of Americans in the RealClearPolitics average think the country is going in the right direction while 56.4% think it’s on the wrong track, Mr. Sanders could be perceived as an agent of change. If he is the Democratic nominee, Mr. Trump’s task will be to convince Americans that a socialist turn would be a ruinous change. Based on Monday’s town hall, that won’t be as easy as Republicans may think. Mr. Sanders is a real contender.

Rove was referring to Bernie Sanders’ FOX News town hall, in which the consensus opinion is that Bernie kicked all kinds of ass, getting the FOX studio audience to cheer for getting rid of their private health insurance. Even the National Review carried the headline “Bernie Sanders Shines on Fox News” with an article that sounded almost admiring:

Bernie Sanders is distinguishing himself from his Democratic colleagues on matters of character, confidence, and imagination. [Sanders] effectively and charmingly exposed the gap between Donald Trump’s political rhetoric and the reality of his administration… Bernie supporters have a lot to be excited about. Their candidate has not only moved his party on ideas, he’s transformed himself from a prophetical voice of the left to presidential material… His message discipline springs from the fundamental integrity of his convictions. He’s formidable.

Trump himself was seemingly left gobsmacked by the town hall. He sent a few feeble protest tweets criticizing FOX for hosting Bernie, but was clearly at a bit of a loss.

I have long argued that Bernie Sanders is a unique political weapon against Donald Trump, because he has an extraordinary capacity to neutralize Trump’s appeal. He knows how to take popular discontent and tell people that their problems are not the fault of immigrants and people of color, but billionaires like Trump who hoard all the wealth and are casually destroying the planet. Every time Bernie goes up against Republicans you can see it, whether he is debating Ted Cruz or speaking at Liberty University. Bernie is the best existing messenger for the left because he knows how to sell socialism to everyone, to go to Iowa or West Virginia or FOX News and get everyone clapping for free college and the demise of Aetna.

With Bernie way ahead of any other declared candidate in the Democratic polls, it seems obvious that he should be the nominee, and the focus now should be making sure that his policy agenda is sound and that he doesn’t make unnecessary compromises for the sake of appealing to the “center.” (Everyone can be tempted by this wrongheaded instinct, even him. I suspect it’s why he’s said nothing about Chelsea Manning.) I hope Mike Gravel and Tulsi Gabbard successfully push him on non-interventionist foreign policy commitments, and Julian Castro pushes him on immigration. Then, every effort needs to be made to actually get him into office. There’s an unprecedented chance to get a democratic socialist elected to the presidency and my God we on the left had better not miss it.

It’s a strange moment, this one, so full of danger and so full of possibility. Donald Trump is the president of the United States, and the weirdest thing is that that is gradually ceasing to feel weird. Climate change is about to spiral completely out of control, and billionaires own the whole goddamn world. And yet here we are with a more exciting left movement than we’ve had in this country since about 1908. And it’s not just here: Conservative rule in Britain is completely discredited and if they held an election today, the British would probably have a socialist prime minister.

Every day I come to work energized. There will be new email in my inbox from some young person who has “turned left” after reading Jacobin and Current Affairs and absorbing videos of Bernie Sanders and ContraPoints. The Democratic Socialists of America keep growing and growing, and they’re getting people elected to local office all across the country. There’s a whole generation of smart, humane young lefties coming up; when I talked to the teenagers running Mike Gravel’s campaign, I was kind of amazed. They were really well-read, uncompromisingly radical, and genuinely committed to building a world based on decency and equality. “My God,” I thought, “at this rate there are going to be thousands of such people, and they can change the damn world.” It won’t just be Alexandria Ocasio-Cortez, but the wave of people inspired by Ocasio-Cortez to believe that just because you’re a 20-something democratic socialist working a service job, doesn’t mean you can’t be your district’s next member of Congress. The most important contribution Ocasio-Cortez has made so far is that: shattering the idea that you are doomed to fail. In fact, they most loudly tell you you’re doomed when they know you can win, because they want you to give up.

How fast things change. Back in October, I wrote an article asking when we were going to get “the climate equivalent of Medicare for All,” the big policy we could all rally around and embrace as a slogan. I mentioned that lots of people were starting to seem excited by a thing called the Green New Deal. Here we are six months later and the Green New Deal is a litmus test for whether you’re serious about climate change. It’s being regularly denounced in the Wall Street Journal, who are terrified of it.

The big worry right now, of course, is that the left is going to be too invested in a Bernie Sanders presidency, and Bernie Sanders isn’t going to be able to deliver on any of his promises alone. It’s not like we’ve successfully rebuilt the labor movement, so Bernie’s power may be limited even if he beats Trump, and the worst possible thing that could happen is a left government that fails to produce any meaningful changes. That’s why we need a socialist running in every district, primary challenges to Democrats all across the country. Considering that so many people are overworked, broke, and demoralized, this is going to be extremely difficult.

But every day there are new signs that the possibilities for political change are greater than we assume. I remember during Occupy Wall Street, everything felt so hopeless. People literally could not conceive of any kind of meaningful change, out of desperation they just planted themselves in the middle of the financial district and tried to hang on as long as possible. Now we have clear goals in sight: cancel student debt, free college for all, free child care, single-payer healthcare, no more wars, net-zero emissions. There are people committed to making them happen. And by God, I feel like they’re going to do it. Conservatives are out of ideas. They know they can’t win a debate with the left—just look how Bernie bowled over the FOX hosts. The socialists are on the march, and we’re gonna win.