What Is The Climate Equivalent of “Medicare For All”? 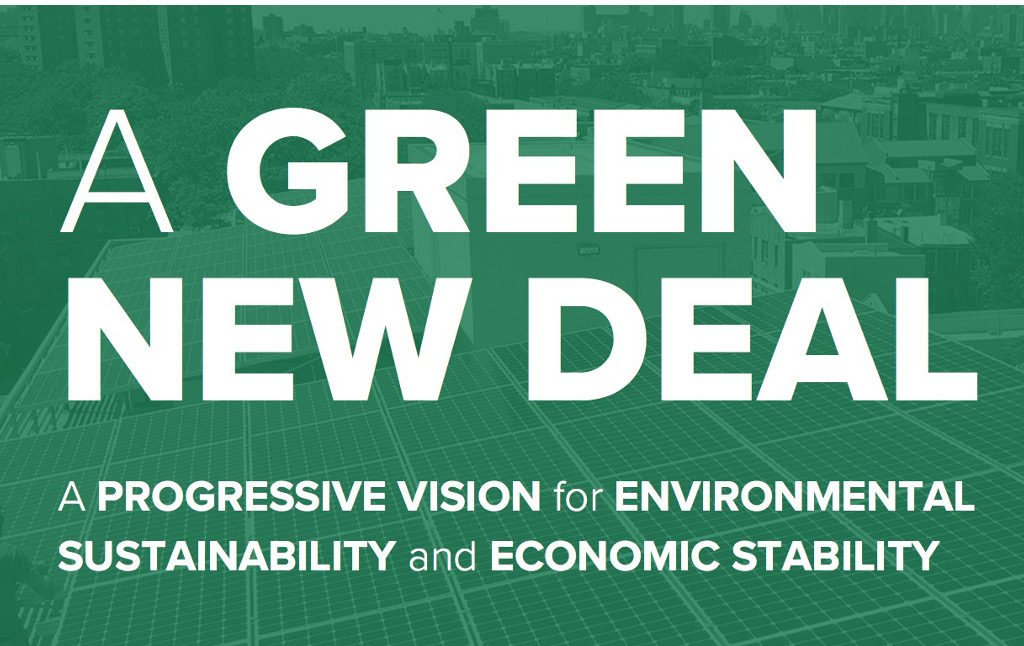 Whatever it is, we need to start talking about it nonstop…

Progressives have been phenomenally successful at “branding” single-payer healthcare. The “Medicare for All” idea has caught on stunningly quickly, to the point where a majority of Republicans apparently now support it. The White House is so terrified of the policy’s success that the Council of Economic Advisers just released an absolutely ludicrous new report on “socialism” and Medicare for All comparing contemporary progressives to Mao and Chavez and telling terrifying stories about the massacre of the kulaks in the Soviet Union. (The report does contain some more serious critiques, but these turn out to be ill-founded as well.)

The case for Medicare for All is straightforward, and if you’d like a good version of it I recommend listening to Chris Hayes’ recent podcast episode with Dr. Abdul El-Sayed (there’s a transcript too), or reading the article on Medicare for All co-written by El-Sayed and Micah Johnson here in Current Affairs. But the success that progressives have had in turning this into a winning issue has made me think: How do we do the same thing on environmental policy?

The United States’ healthcare system remains a disaster and fixing it once and for all is of the highest moral urgency. Climate change, however, is a threat to the entire species. The IPCC scientists have made themselves very clear: If we do not reverse course soon, the consequences for human lives will be calamitous. This is a critical moment in the history of our planet and unless we build the political will to radically alter the way we produce and consume energy we may destroy the earth as we know it. With Donald Trump in the White House, and Jair Bolsonaro now president of Brazil (one of the largest countries on earth by both area and population), we’re heading in exactly the wrong direction.

And yet: The Democrats have absolutely no serious climate plan. As an Atlantic report put it, they are “shockingly unprepared” to deal with the issue of climate change, and “any people in the party know that they want to do something about climate change, but there’s no agreement about what that something may be.” Earlier this year, Alexander Kaufman in the Huffington Post called it “baffling” that Democrats lack a bold climate change action plan. Of course it’s not that baffling: Climate change is not the kind of issue that’s easy to mobilize voters around, it leads to tension with the labor movement (especially when Democrats handle the messaging badly—remember Hillary’s promise to “put a lot of coal miners and coal companies out of business”?) And of course it doesn’t help that the DNC has now reversed its ban on campaign donations from fossil fuel companies.

I’m not actually sure the political calculus about climate change is correct, though. When New York magazine talked to millennials who didn’t plan to vote, for example, here is what one of them said:

I look at it this way: That report just came out the other day about global warming, talking about how we have 12 years, until 2030, for this radical change unlike the world has ever seen. And The Hill newspaper just put out that article about how the DNC does not plan on making climate change a big part of their platform, even still. I just do not understand why I would vote for a party that doesn’t care about me in any way. They can say, “Sure, we’ll lower student interest rates.” Well, I don’t give a shit about student interest rates if I’m not going to live past 13 more years on this planet. Everyone on Twitter can be like, “Oh, we need the Democratic Senate to pack the courts.” But have they watched the Democratic Party at any time during my lifetime? They have not done anything. Like, they don’t stand for anything. And I just don’t see the point anymore.

This individual is well-informed and cares about things, but they realize that the party is not actually going to do anything on an existential issue! Now, personally I still think you should vote for Democrats in contested elections (the lesser evil does get you slightly less evil). But I see this person’s point!

But just as leftists have managed to push Medicare for All from the fringe to the mainstream, we now have to do the exact same thing on climate. There needs to be an incredibly ambitious, but relatively straightforward plan that we can turn into a slogan and build consensus around. It needs to be a core part of the messaging from the left: Medicare for All, Abolish Ice, free college, [insert climate plan here]. Otherwise, nobody will talk about it. How much did climate change come up in the 2016 debates? Hardly at all. But we can fix that.

The most serious place to start, as far as I can tell, is with the various “Green New Deal” proposals. I am not wild about that name, in part because I don’t like “green” branding generally and in part because I think it sounds more like a jobs program than a climate change plan (and while jobs programs are good, I think we need to be up front about the fact that we are trying to stop warming, not just employ people in environmentally-friendly ways). These are minor criticisms, though. If it’s what we’ve got, it’s what we’ve got.

The most serious existing plan, as far as I can tell, is the Data for Progress proposal authored by Greg Carlock, Emily Mangan, and Sean McElwee. Despite calling itself a “greenprint” (must we?), it’s a thorough plan for transitioning to a low-carbon, sustainable economy. The targets are hugely ambitious: 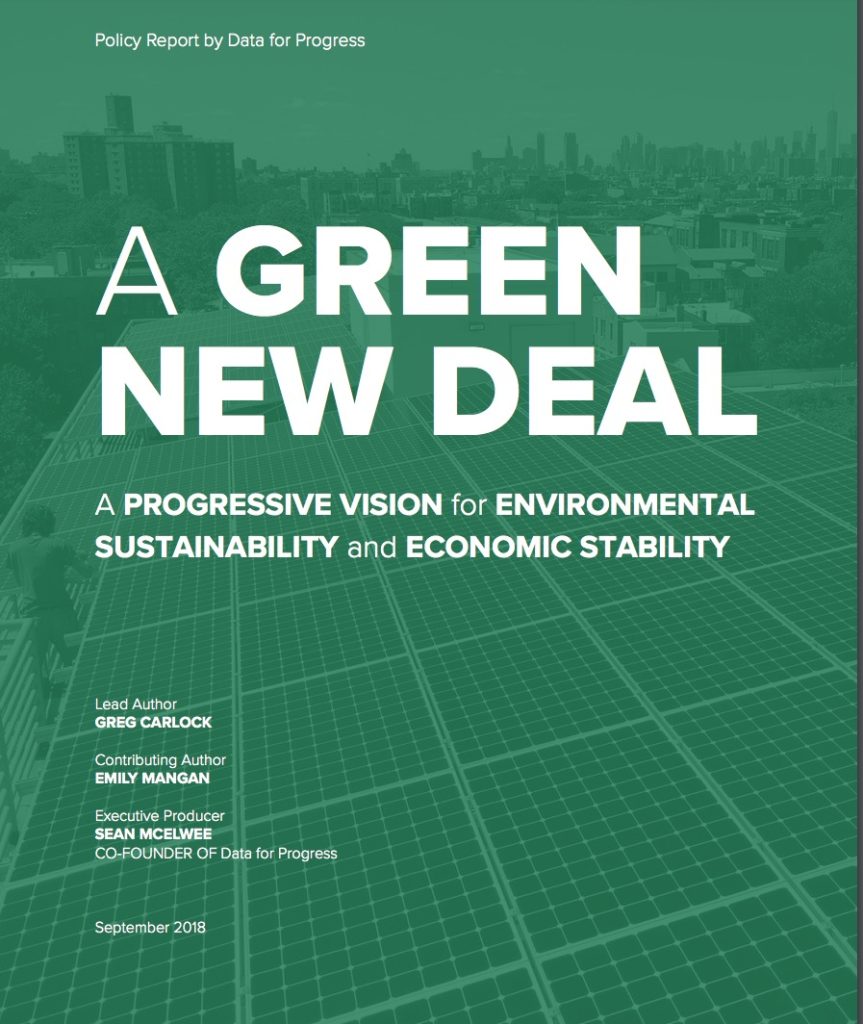 There’s more. Everyone should read it, and then adopting the plan should be a “litmus test” for candidates. As far as I can tell, this piece of the left’s agenda has still been missing; I don’t think the DSA, for example, has a climate plan in the same way they have a healthcare plan. (I apologize if I’ve overlooked it.) It is difficult to fix climate change, obviously, but it’s not difficult to fix the lack of an agenda for fixing climate change. That’s long overdue, and serious leftists should refine a plan, give it a catchy name (Green New Deal or otherwise), and then never, ever shut up about it, which is the only way you get things done politically. Brilliant and dedicated people have already shown that you can do this: You take your policy wishlist, your wildly ambitious dreams, and then you package them in ways that make them actual viable political goals. Environmental policy has spent far, far too long being treated as a “secondary” issue. I think that’s both catastrophic for the world and its people, and a bad idea politically. “Republicans will destroy the earth, whereas we will try not to” seems like a winning platform to me. We just need to start running on it.