The Government Must Actually Work 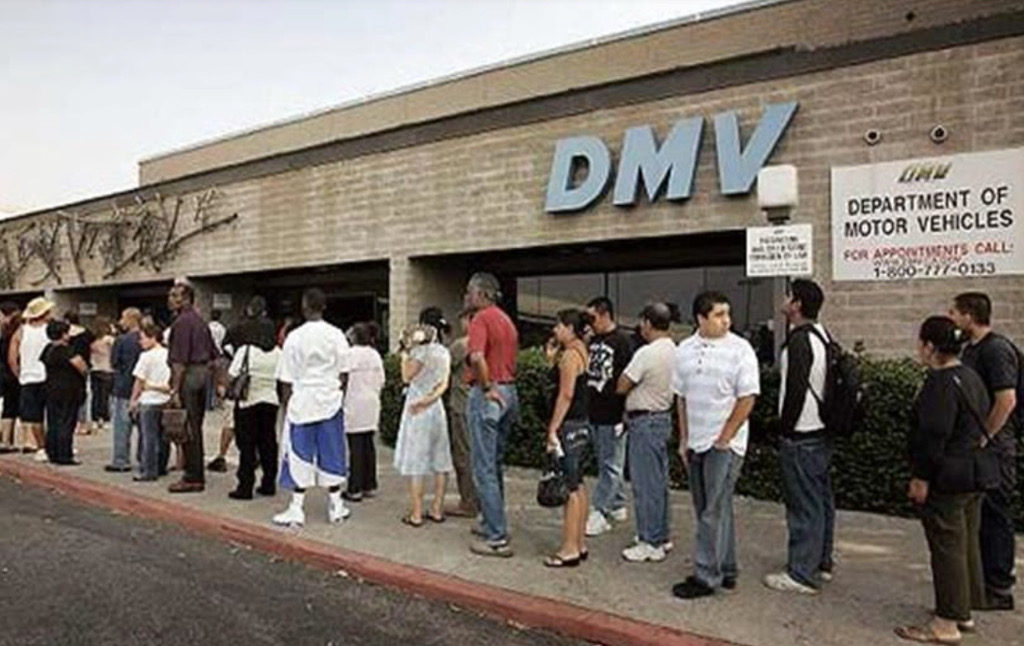 Making sure public services don’t operate like the Louisiana DMV…

Today I came to the DMV prepared, because I know how these things can go. Once I waited 3 hours at the Boston DMV, only to be told that I’d brought the wrong kind of document—they could only accept a bank statement as proof of address, whereas I had brought a letter from my bank. I had to come back again the next day and wait all over again. This time, going to the Louisiana DMV to transfer my license from Massachusetts, I was determined to get through on the first try. I brought every document I could think of: my passport, my bank statement, my tax return, my old license, my Social Security card.

I arrived 20 minutes before the place opened, and there were already 30 people in line ahead of me. When they started letting us in, there was immediately a snag. The elderly man who is supposed to print out the little tickets you take (A-316 and such) had forgotten to load the paper into the ticket printer, so he shuffled off to find some. His pace made the DMV sloths in Zootopia seem downright zippy. When he returned some minutes later, he couldn’t figure out how to get the paper loaded. By the time the machine started spitting out tickets, 20 more people were in line.

When I got up to take my ticket, I told him I was there to transfer my out-of-state license.

“And you have your birth certificate, yes?”

Ticket in hand (I was G-214), I sat in the main waiting area. A loudspeaker is constantly blaring out ticket numbers, making it impossible to read a book. There were 25 stations, each with a little display to say which number was being served. Only six stations were actually operating, so it took about 40 minutes for me to be called. I handed over my documents. I was not asked for my birth certificate. I did not mention it.

The woman serving me was very kind, but after a few minutes of keyboard-tapping she said:

So I sat back down and waited for the help desk to email her back. They took their sweet time. I went back up again. More tapping, another problem, another help desk email. However: I did, in fact, get my license. Total time: 90 minutes.

I was one of the lucky ones. The woman waiting next to me was told she had not brought form I-94, and so could not be processed. Looking at the Yelp reviews afterwards, I found that people routinely spend five-seven hours sitting in this DMV waiting to be called. If you don’t get there before it opens, there are literally hundreds of people in it, all miserable, most having to stand up the whole time. Some selections from reviews:

The problems with this DMV are not unsolvable. They are actually very, very simple. (1) It’s understaffed, so there are too many customers for too few service windows. (2) It’s unclear what documents people need, and the person at the ticket-handing-out phase does not know what people need to have. (3) The staff haven’t been trained to deal with very common problems, meaning that supervisors are frequently needed. Change those things, you change the whole experience.

Visiting the DMV is an aggravating experience for me, not because I mind the wait that much myself, but because I hate seeing so many people waste so much time and be so unhappy unnecessarily. Hundreds of people per day are having hours upon hours squandered. The staff, too, suffer: They were very nice to me, but completely under-resourced, and they have to face angry customers all day without being able to do anything. (I’ve written before, using Spirit Airlines as an example, about the way private companies that mistreat their customers are also mistreating their customer-facing employees.)

Worse, bad experiences at the DMV forever affect people’s perceptions of “government.” If this is what interacting with the government is like, then the arguments for privatizing public services begin to seem far more compelling. Look how inefficient the state is. Politicians can say “Do you want your health care to run like the DMV?” and people will nod and remember the five hours they spent standing in a sweltering room waiting to get their license renewal application denied.

In reality, “inefficiency” is only one part of the problem here. The main problem is there are only six stations open. This isn’t a problem of government waste, it’s a problem of austerity. Government can do things, but we have to be willing to spend enough money to hire enough people to get the things done. Hire more people, wait times drop, people are happy. (This means that a good way to push a pro-privatization agenda is to starve existing agencies so that they are unable to function, then point to their dysfunction as evidence the public sector can’t do anything. Underfund the NHS and then point to longer wait times and rationing as evidence socialized medicine doesn’t work.)

A lot of simplistic arguments are made that government can’t work, with the supposed evidence being that particular government agencies in the U.S. don’t work well. So, for example, American public schools show that government shouldn’t run education. Of course, that doesn’t tell us anything about “government” because many of the countries with the finest education systems in the world—the ones that consistently beat ours—also have public schools. And if the DMV and the post office are evidence against government, then fire departments and libraries and park rangers should be counted as evidence for it. In fact, you can have government agencies that produce good experiences, and private sector companies that produce horrible ones. (I would almost rather have a full day at the Louisiana DMV than ever have another interaction with Cox Cable.) The difference is less a matter of public and private than “well-run, well-structured institutions versus poorly-run, poorly-structured institutions.”

I think a mistake that some on the left make is not thinking deeply enough about how agencies run, and how to make them run better. There needs to be a left critique of bureaucracy, that is sensitive to the way that regulations and paperwork can grow like a fungus and we need to make sure things operate in ways that don’t make everyday interactions with the state something people dread. It’s not just a matter of funding, though adequate funding is obviously a prerequisite. Public schools can still operate badly even when they have more resources. There actually have to be people in charge who know what they’re doing and are serious and committed about making the institution function. We on the left need to examine case studies of failures like healthcare.gov and understand the management missteps that were made and think about how to avoid them.

Of course, free market types will argue that the problem here is that the government does not have market incentives toward efficiency. But the private sector also has bad incentives: A for-profit charter school, for instance, has an incentive to trick parents into thinking their children are being educated while actually just funneling as much money to its shareholders as possible. I went to a fantastic public school (sadly now turned into a prison). I know there’s nothing inherent about a school being “public” that means it has to fail, because I’ve seen it succeed. This is why I find the charter school movement so dumb: Instead of pushing to outsource the running of public schools to private entities, we should be examining public schools that do work and adopting best practices. If offering parents “choice” is crucial, that can be done within a public system.

We certainly don’t want to start “running government like a business,” because businesses are authoritarian and sociopathic. But we do need to think about the micro-level factors that make an institution function or fail. These can be as simple as: Do you tell people the documents they need at the beginning, or after they’ve waited 3 hours? We must make sure government does not run like the Louisiana DMV if we are ever to build support for expanding the role of the public sector in people’s lives.