The Need For Workplace Democracy 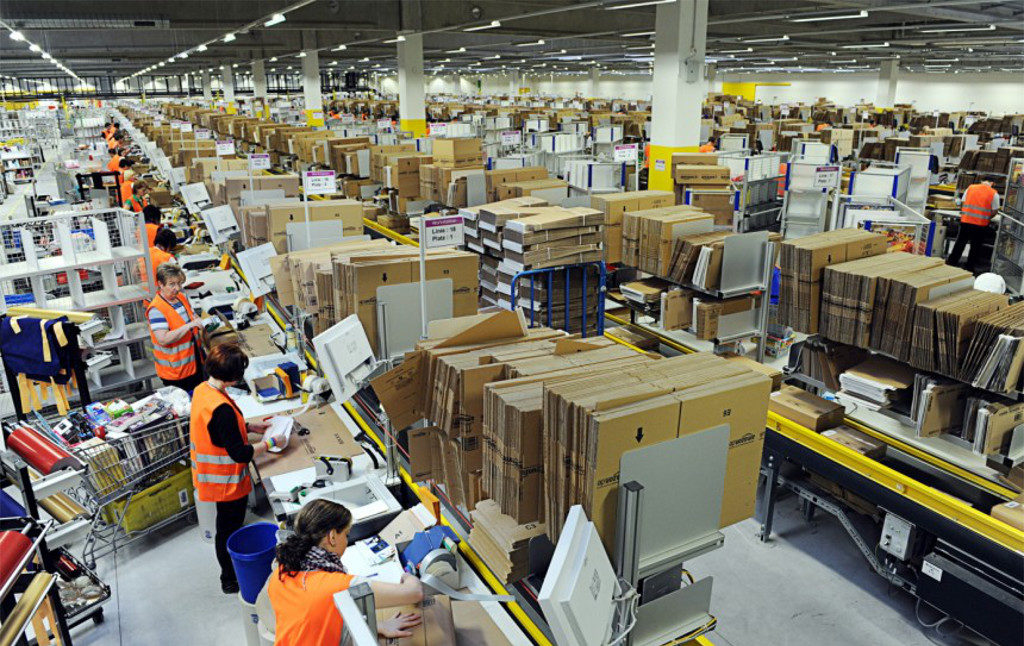 In Hired: Six Months Undercover in Low-Wage Britain, James Bloodworth writes about what working in an Amazon warehouse is really like. Turns out, the answer is: It’s awful. Bloodworth says it felt like a “prison,” with workers constantly monitored and having to pass through security whenever they went on break or to the bathroom. (Time spent in the security line is, of course, unpaid.) Warehouse workers frequently walked 10 miles a day across 10.5 hour shifts, and frequently worked mandatory overtime. The hand-held devices they carried frequently transmitted “admonishments to speed up” and ranked workers from “highest to lowest in terms of the speed at which we collected the items.” Break time was minimal, and at lunch “you had about fifteen minutes to bolt down the food.” Bloodworth would arrive back after lunch to find two or three managers “pointing at imaginary watches and bellowing peremptorily at anyone who returned even thirty seconds late [and saying] ‘Extended lunch break today, is it?’ [or] ‘We don’t pay you to sit around jabbering.’”

The atmosphere was suffused with jargonistic bullshit. You weren’t supposed to call it a “warehouse,” but a “fulfillment center.” Workers weren’t “fired,” they were “released.” (That one might be accurate.) In fact, they weren’t even “workers,” they were “associates,” and Bloodworth says that on day one management told them that Amazon was an egalitarian workplace because “Jeff Bezos is an associate and so are all of you.” (Some associates are more equal than others, by about $150 billion.) Posters of happy employees had captions like “We love coming to work and miss it when we’re not here!”, though Bloodworth cites a survey of Amazon staff showing: 91 percent wouldn’t recommend working there, 89 percent felt exploited, 71 percent reported walking more than 10 miles per day, and 78 percent felt their breaks were too short. Workers were disciplined with “points,” and anyone who received six points would be fired—sorry, “released,” with points given out for “being sick” or “being late because the Amazon bus didn’t show up.”

For good reason, Amazon warehouses have become symbolic of 21st century capitalism. They represent an extreme version of some very common tendencies, namely the ceaseless pressure on workers to be more productive, the stripping of benefits and dignity, and the increasing imbalance of power between workers and management. An Amazon warehouse is a place where the people doing the labor have almost no control over the nature of their work. There are endless rules, which workers must follow to the letter, but which they get no say in. It doesn’t matter if every single box-packer thinks the rate of box-packing is unreasonable and unhealthy. The rate is the rate, and if the box-packers don’t like it, they have two choices: Suck it up, or G.T.F.O.

Unfortunately, people don’t seem to expect much more than that these days. The ridiculous libertarian idea of “choice”—that if you accept a rotten deal, you can’t complain that it’s rotten, since you accepted it—seems to have become widely accepted. That’s unfortunate, because it’s a recipe for mass misery. If “well, you can always quit” can be used to justify any employment conditions, then employers can mistreat their workers however they please. So long as you are not literally enslaving people, but are instead merely preying on their economic need, you will have zero moral obligations, and any amount of pettiness, dehumanization, and overwork can be rationalized. Nobody who thinks people ought to live happy, dignified, free lives should accept this logic.

So we can reject the Taylorist model of the Amazon warehouse, in which the worker is treated as a piece of equipment (whose humanity is an inconvenient obstacle to further productivity). But how should workplaces function? On the left, we often talk about something called “economic democracy” or “workplace democracy.” Sometimes we say “empowerment,” which has steadily become one of the world’s least meaningful words. These terms do actually refer to something real, though: giving people more of a say in how their workplaces operate, and a greater share of the rewards.

There are lots of ways this can occur in practice. Just to take a relatively simple and minor one, think about codetermination. In Germany, large companies are required to have nearly half the board of directors elected directly by the company’s workers. There are also worker councils that have “far-reaching information and consultation rights that enable [them] to exert influence on working conditions, pay principles, working time etc.,” and “employers must negotiate with the work council if changes affecting the workforce take place, e.g. the dismissal of employees.” In 2012, the Washington Post reported that research on the effects of the codetermination system is “almost uniformly positive toward the councils” and “almost uniformly found that the councils increase wages.”

Codetermination is so obviously a good idea that it’s shocking it isn’t discussed more. The basic principle of democracy is that people ought to have a say in decisions that affect them. Workers bear the consequences of workplace policy decisions, and yet in the United States they lack any formal right to participate in those decisions. This means that corporations operate with the political structure of dictatorships: People at the bottom of the hierarchy must accept the rulings of officials that they never elected, and their only option is to leave. If the dictator of a country said “if people don’t like it here, they can leave,” we wouldn’t think it made them any more “democratic” or legitimate, and yet somehow this logic is accepted in the workplace, where people often spend over half their waking life.

It turns out that when you tell people about the idea of workers voting for their bosses, they are generally quite positive about it. Data For Progress found that employee governance was one of the most popular progressive ideas, supported in every state. Yet somehow, what should obviously be a basic, non-negotiable feature of corporate structure is seen as “radical.” That’s peculiar, because corporations are artificial institutions constructed by the government’s laws. They don’t have a “metaphysical” reality. If these institutions don’t function well, they can be reworked. Currently, corporations are constituted to be borderline psychopaths; as Milton Friedman once famously wrote, the only “social responsibility of business is to increase its profits.” The results of introducing such a pathological institution into society can be disastrous. (Witness Coca-Cola trying to cram as many gallons of Coke into as many bodies as possible, no matter the human consequences.) At a bare minimum, corporate charters should be amended to make sure that they give some priority to the “stakeholders” who are impacted by their decisions, and employees shouldn’t simply be subjected to the capricious whims of megalomaniacs like Jeff Bezos.

Amazon might argue that it couldn’t be successful if it didn’t squeeze every ounce of productivity out of its employees. I actually don’t especially care whether this is true, because for me a democratic workplace is non-negotiable. But it’s also highly implausible. Plenty of enterprises have at least some minimal employee ownership and participation, and still do quite well. Consider how the popular British department store John Lewis operates:

All 76,500 of John Lewis’s permanent staff are partners and they ultimately own the retailer’s 35 department stores and 272 Waitrose supermarkets, which generate annual sales of more than £8bn. As the company itself puts it: “Partners share in the benefits and profits of a business that puts them first.” John Lewis’s constitution also lists a formal mission to maximise the “happiness” of its staff. The power structure involves a staff council – for ideas and complaints to filter up to the board – and a weekly magazine where staff can air their views about policies and management, anonymously if they choose.Staff also receive employee perks – worth £70m this year – ranging from holiday homes to sailing clubs, theatre outings, theme park admissions, and even a choir, all subsidised. It also one of the dwindling number of companies to operate a final salary pension scheme which is funded entirely by the company.

The competitive pressures of capitalism, of course, make it difficult for any one organization to go too far toward prioritizing people over financial success, and it’s been noted that even worker cooperative like Spain’s giant Mondragon can end up exploiting people. But there is still nothing “necessary” about CEOs getting disgustingly rich while ordinary workers simply do what they’re told, for little pay and no benefits. There are lots of different ways in which “workplace democracy” can be created, and it occurs in various degrees from “your supervisors care what you think” to “you get to vote for your supervisor” to “you are your own supervisor.” Thoughtful leftist economic thinkers like Gar Alperovitz and Richard Wolff have come up with interesting ideas for how to get beyond the usual capitalist models. Tammy Baldwin and Elizabeth Warren have actually introduced legislation to require a form of employee governance. We should at least agree on the basic point, though: Workers should not be feudal subjects, and the existing imbalances of power between capital and labor have to be altered.

The Annihilation of Florida: An Overlooked National Tragedy How To Build Beautiful Places U.S. Policymaking on Sex and Reproduction is Based on Damaging Conservative Assumptions Why This Computer Scientist Says All Cryptocurrency Should “Die in a Fire” Thinking More Clearly About the Idea of “Rights”