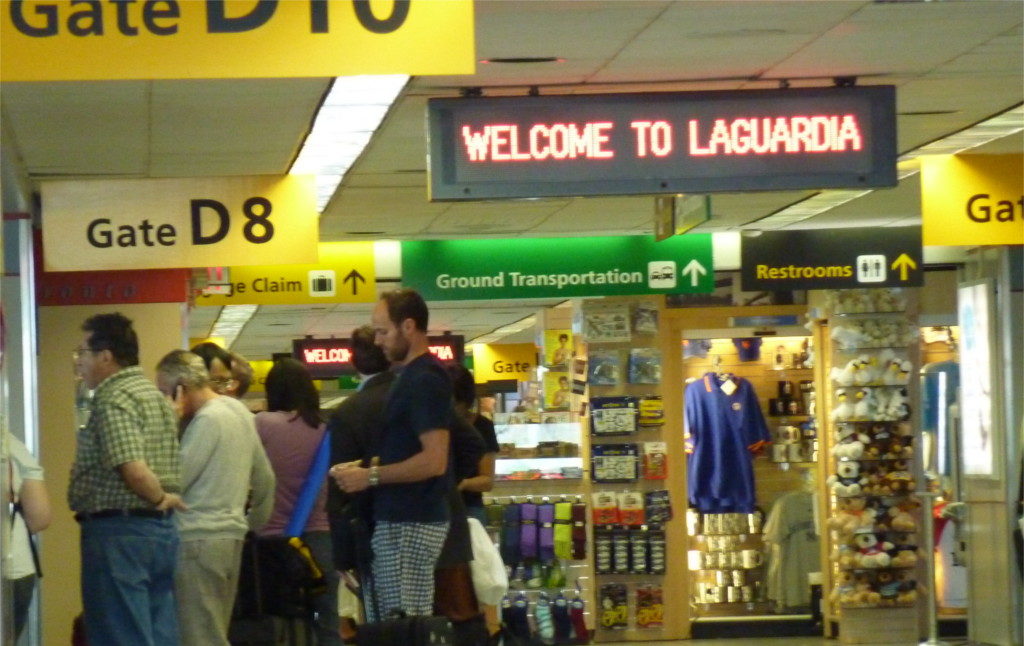 Why are American airports so bad? If you ask CNBC, it’s because too many of them are public. This recent video from the business channel examines airports around the world and compares them to airports in the United States. Singapore’s Changi Airport, it says, has a butterfly garden and a movie theater. Qatar’s Hamad Airport has a swimming pool and a gym. Munich’s airport has a pop-up holiday market at Christmastime. And then there’s LaGuardia which… just sucks. In fact, American airports generally are depressing and decrepit.

The culprit, CNBC suggests, is government. “For the most part, in the U.S., airports are publicly owned,” it tells us. Europe “has taken the lead on privatizing its airports” and more than 50 percent of European airports have some form of private ownership. The video quotes a senior vice president of Moody’s saying that in the U.S. “there is no profit motive,” and the European airports have found “better ways to extract higher dollar values from their passengers.” But “in the face of decaying U.S. infrastructure, a handful of airports have started to abandon the public model,” we are told, such as LaGuardia’s public-private partnership on a new renovation. An official from the Port Authority says that “the government has limited funds” and “there are many things that private enterprise does better than public agencies, and one of them is actually operate both the commercial and the operational side of an airport.” Private companies are funding all sorts of upgrades at airports now, the video says, and as airports get older and more crowded, they will be forced in coming years to “seek out new sources of financing” to “compete on the world stage.”

The message of the video is clear: The problem with American airports is that we haven’t let corporations run them. If we’re going to keep up with the rest of the world, we need to privatize now. If we want nice things like the other countries have, we need to dump our inefficient public model and allow profit-seeking companies full control over our airports.

It is a familiar message, of course. You hear it about schools, too: Our public schools are decaying and inefficient, we must privatize them and introduce a profit motive in order to improve them. In the case of schools, it has always been quite obvious why the argument is stupid: The countries with the best schools, the ones that are beating us, have not privatized their schools. They have just invested in having good public schools, which we haven’t. If we want to “compete,” we don’t need a corporate model, we just need to spend some money making our schools better. (Personally I have never been tempted by the pro-privatization argument in education for the simple reason that I attended an excellent public school, and so I know there is nothing about a school being public that prevents it from working well, if it’s well-funded and well-staffed.)

But what about airports? The video suggests that the U.S. is falling behind because we’ve failed to learn the lesson that other countries have learned, namely that private airports are more luxurious and well-run. Well, here, too, my personal experience makes me dubious: I grew up traveling through Tampa Bay International, which has been ranked one of the top airports in the entire world, and is owned and operated by the state. It’s attractive, well-designed, spacious, modern, and convenient, and also has fun little people mover trains that shuttle you across bridges from the landside bit to the airside bit. It is a functional and useful state-owned enterprise, a well-run bit of the government.

What about the rest of the world, though? Well, funny thing about that: Remember the three airports cited in the video as examples of The Nice Airports That Americans Don’t Have—Changi Airport, Hamad Airport, and Munich Airport? All three are public airports. Changi is owned by Singapore, Hamad by the Qatar Civil Aviation Authority, and Munich is operated by Flughafen München GmbH, which is jointly owned by the State of Bavaria, the Republic of Germany, and the City of Munich. South Korea’s Incheon Airport, ranked best in the world 11 years running by the Airports Council International, is also a public airport. Another fun fact? Three out of the top five airlines in the world, Qatar Airways, Singapore Airlines, and Emirates, are state-owned.

The World Bank has examined different types of airport structure (public, private, and hybrid) and concluded that no one model is clearly superior, because there are good airports of each type. This will make the heads of free market types explode, because they believe to their bones that the private sector must necessarily do things better than government. It turns out that the world is more complicated than that. But the International Air Transport Association (IATA) has actually warned against privatizing airports, because the push for corporate profits can actually come at the expense of improving airport users’ experience.

That makes sense to me: I wrote back in May about how horrible it was traveling through London’s Heathrow Airport, which had been privatized in the Thatcher years. Heathrow has plenty of space for luxury stores like Louis Vuitton and Tiffany, but almost no space to sit down. This makes sense on capitalistic logic: After all, high-end stores bring in large amounts of money from rich assholes, while sitting down is free (for now), so a profit-maximizing airport is necessarily going to have very little “public” space for ordinary travelers to relax and a lot of space for people who want to spend lots of money.

It’s incredible how brazen CNBC’s propaganda is. It doesn’t actually seriously examine the question of what makes an airport run well, or look at the IATA’s warnings, or even acknowledge the obvious contradiction between its entire thesis and the fact that the “good” airports it cites are public. It just repeats mindless dogma about how private enterprise necessarily works better than the public sector.

Unfortunately, because this is conventional wisdom in Neoliberal America, there’s a good chance this advice will be followed. And Americans won’t get what they’re hoping for: They’ll find that airports do come up with a lot of new ways to “extract higher dollar values from their passengers,” in the video’s words, but that doesn’t lead to the beautification of airport common areas. Instead, it’s just going to flow into the pocket of whatever corporate owners you sold your airport to at a rock-bottom price, and travelers are going to remain miserable. There’s no way around it: The real solution is that you have to invest in your public resources if you want them to be good. The desire for magical solutions means hoping that by changing the ownership structure you can magically change the airport. But the truth is: Good infrastructure that serves the public is costly, and you just have to pay for it. If you want good airports, spend money on making good airports. That is what the Gulf states do, it is what Singapore and South Korea have done.

It’s funny how deep free market myths run. Take, for example, the China Myth. I hear constantly in America that China was a communist country, but then it became a kind of authoritarian capitalist country that “liberalized” its economy and introduced “market reforms,” which is why many fewer Chinese people are in poverty now. In fact, China remains a classic example of the bad old “state ownership” that we associate with inefficient nationalized enterprise. Look at this chart from the Congressional Research service: 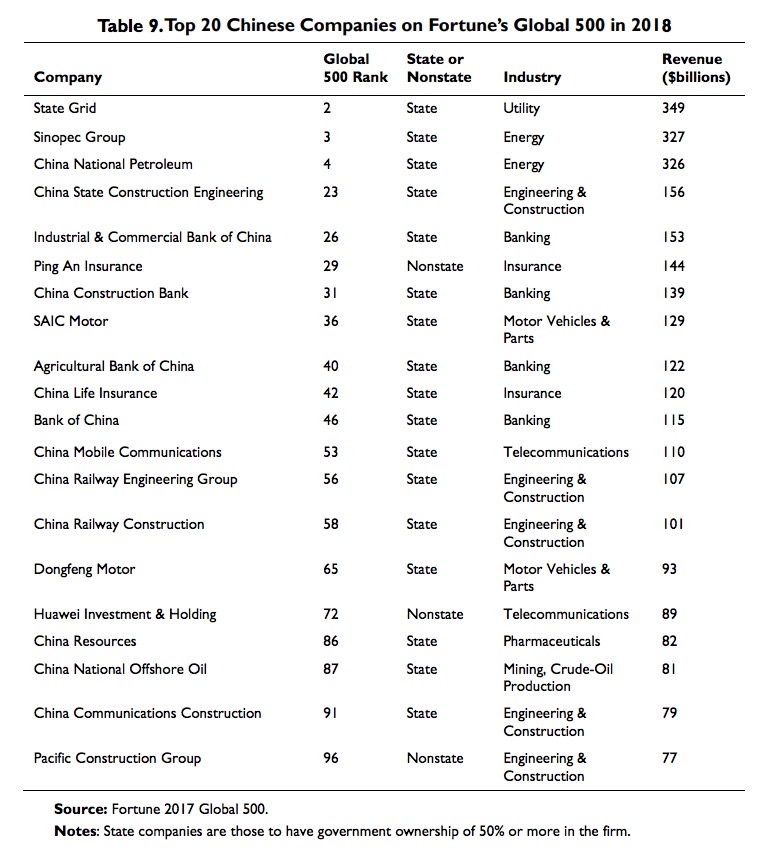 Almost all state-owned enterprises! Here’s the CRS on just how involved the state is in the economy:

The typical large industrial Chinese company is …wholly or majority-owned by a local government which appoints senior management and provides free or low-cost land and utilities, tax breaks, and where possible, guarantees that locally made products will be favored by local governments, consumers, and other businesses. In return, the enterprise provides the local state with a source of jobs for local workers, tax revenues, and dividends.

Now I’ve seen it argued that this means China’s economy is still more properly categorized as “market socialism” than “state capitalism,” because the country’s 150,000 state-owned enterprises mean that a lot of the “means of production” are held in common. (Personally I am reluctant to call undemocratic systems socialistic.) But the important fact here is: Clearly it is not the case that “government” is inherently an economic disaster and the Private Sector gets things done. That makes sense, when you think about it: Most corporations aren’t run by their owners (there’s a separation of management and ownership), so it may make very little difference to the day-to-day operations whether the stocks are held by the state or by a small group of private shareholders. (Matt Bruenig has elaborated on why state ownership is benign here in Current Affairs.)

In the United States, we have yet to get past the discredited libertarian myth that government is inherently capable of managing an enterprise well. This is in part because in the U.S., our institutions are badly-managed and help to fuel the myth: Our public trains and schools and airports and DMVs suck, so we think it is the nature of public things to suck. But this is false, because around the world, there are great public airports and trains and schools. The CNBC video shows how easy it is to totally bury or overlook these, and just how powerful the myth of Government Bad, Market Good is.

We don’t need to privatize our infrastructure. We just need to invest in it.