The Austerity of Luxury 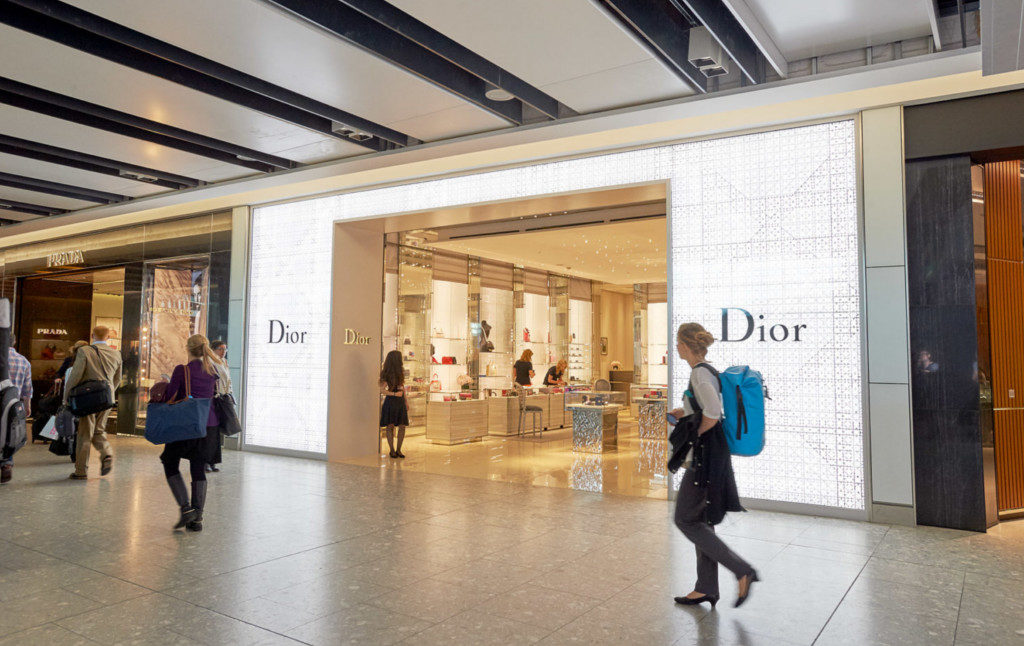 There is not enough seating here in Heathrow Airport’s Terminal 5, even though there is a lot of it. I keep bumping into people as I move around—it’s just an overcrowded space with too many bodies in it. The plastic seats are uncomfortable and hard, and about one in every 20 has a power outlet. (I was among the lucky few, but my outlet doesn’t work.) Even though Terminal 5 is in a bright, clean, modern building—the largest free-standing structure in the U.K., apparently—it feels cramped.

And yet, somehow, while the airport authorities have not managed to make space for passengers, they have managed to make space for a series of luxury storefronts. In Terminal 5 you can visit Prada, Burberry, Hermès, Rolex, Dior, Cartier, Chanel, Louis Vuitton, and Tiffany. If you want a £5000 handbag or a £200 bottle of cologne while you’re at the airport, Terminal 5 has you covered.

I find it a troubling sign of our age that to most people passing through the terminal, this doesn’t seem insane. I haven’t seen anyone in the Prada store since I’ve been here, but while there’s a sense that Terminal 5 is “upscale” nobody seems to think it’s profoundly dysfunctional and wrong.

If you ran an airport that aimed to maximize the “luxury” of its travelers’ experience, you would not simply fill half the available space with designer goods outlets. You would fill it with squishy armchairs that all had side tables, lamps, and outlets. You would make a building so beautiful that everyone who passed through it had their breath taken away, not a building so blah that nobody could distinguish it from any other airport.

Heathrow Terminal 5 is the airport that capitalism builds you. So many American airports are owned by municipalities that you might expect a more social democratic country like Britain to own Heathrow. Not so; it’s controlled by Heathrow Airport Holdings, a private company that is in turn owned by another private company, FGP Topco Limited, which is itself owned by a consortium of investors including the Spanish corporation Ferrovial, S.A., the Qatar Investment Authority, Alinda Capital Partners, and the China Investment Corporation. Thanks to Margaret Thatcher, Heathrow is operated in the interests of capital, not in the interests of the traveling masses.

The results are what you’d expect. If you’re rich, terminal 5 is great. The main lounge might be cramped and uncomfortable, but you can pay to use luxury private lounges where your comfort is assured. While you wait for your flight, you can buy yourself another Rolex. (When I was there, to my amusement, the three men browsing the Rolex store looked exactly like the kind of assholes I would expect to see browsing the Rolex store. I’m sure you can picture them.)

Thanks to expanding global inequality, we’re constantly seeing new bifurcations in the experience of rich people and ordinary people. At amusement parks, the rich can pay to go on rides sooner. They can hire people to stand in line for them. Their communities are gated, their schools are private, their airport lounges are roped off. All of this is going to continue to get worse: The number of everyday situations in which “we’re all in this together” will disappear. They will drive on traffic-free private toll roads and use members-only “public” parks. The things we hold in common will deteriorate, because they are no longer subsidized by the wealthy. Public schools are the most obvious example—instead of giving money that will be used to educate poor children, the rich simply retreat to their own segregated communities where the schools are magnificent. Meanwhile, the Detroit schools are literally falling apart. The airports will be the same: Economy class will be more and more uncomfortable, possibly even without seats, while first class will be ever more opulent.

I was struck by something else about Terminal 5, though, that you’ve probably noticed in your own journeys through Neoliberal Hellworld: It wasn’t even that luxurious for the rich. They get expensive things, to be sure, but they don’t really seem to get nice things. This was my experience the one time I was upgraded to first class. There was more legroom, which was good. But most of the other tweaks to the experience were things like calling me “Mr. Robinson,” and generating the feeling of superiority rather than the authentic experience of superior pleasure.You may have been struck, if you’ve ever entered a McMansion, by the fact that it isn’t actually a very comfortable house. All that money is buying status objects, but it’s often not buying the actual best things. The best house is not the largest house, because the largest house tends to be extremely inconvenient and makes you feel small and alone.

Luxury can feel strangely austere, as when rich people remodel old Victorian houses to prune all of their funky bits and human touches and turn them sleek and minimalistic. Look at Hudson Yards, the new “billionaires’ playground” in New York City. What strikes me about it is that it’s so empty. You’d think that if you had so much money to spend, you’d build a place overflowing with life, with colorful birds everywhere and gardens with hedge mazes. Instead, they build these dead places where you can do little but buy watches and handbags. Wouldn’t you expect them to be having the most fun, building the world’s longest log flume or the world’s most elaborate laser tag course? But they don’t. They build the most boring, lifeless spaces on the planet.

Isn’t it a little strange? The rich are trapped just like we are, all they can do is choose which brand of bag or watch they want. Their airport, just like ours, has no trees or flowers, no fountains, no river running through it. Their time at the airport will not be much less depressing than yours, though they will spend it in a more comfortable chair. They live in expensive austerity, a world calculated to be maximally efficient in the delivery of pleasure that end up delivering a technologically sophisticated tedium.

I have bought expensive things now and then. I am for a “luxury leftism” that encourages people to have nice possessions, and I own a far-too-expensive dressing gown and a trio of beautiful suits. For these purchases to be pleasurable to me, however, they had to feel very special. If I had bought these treats at an airport because I was bored and had money, they would have meant very little. The people who make designer clothing and accessories work hard to make the experience “feel special,” but there is something absurd about putting these shops in an airport, like having a vending machine for precious gemstones. I do not believe that the rich are even getting the kind of experience that they are paying for when they are being sold designer handbags as a way of passing time, next to the racks of mystery novels and granola bars. It’s luxury without any of the feeling of special delight that should accompany indulgence.

I am generally cautious about saying things like “money doesn’t buy happiness” because I suspect that it often can. Many of the most serious problems people face can be solved through having more money. But there’s also something seriously wrong with the culture of rich people. Not only is their very existence immoral, but they have no taste. The sealed-off world created through the exploitation of the working class isn’t even enjoyable to be in.

Airports are infamously depressing and hideous. But why do they need to be? The experience of flight should be exhilarating—you’re enjoying one of the most miraculous human scientific achievements in history, and you are going to end up in a brand new place after hurtling through the air! We could make these places such fun—egalitarian spaces where everyone, regardless of class status, is pampered and made comfortable. Instead, most of us are livestock and some of us are SkyClub members. What a miserable pity, what a missed opportunity. If Terminal 5 is the airport that capitalism built, we must use our creative powers to imagine a better and more equal one.