It’s Just Incredible What Some People Can Believe 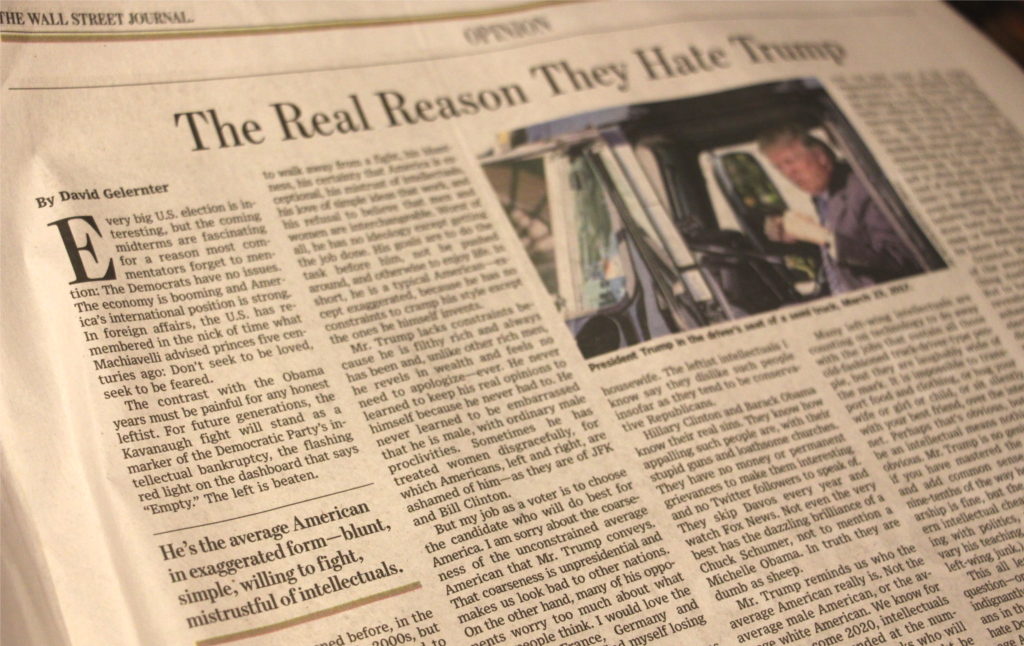 “Partisanship” is not the problem with politics, but boy are we far apart…

There are so many bad opinions crammed into this single Wall Street Journal op-ed by Yale professor David Gelernter that I cannot hope to address them within the finite period of a human lifespan. Primarily, Gelernter  argues that hatred of Donald Trump is hatred of America. Here is a large chunk of the op-ed for you to read and enjoy with me:

Every big U.S. election is interesting, but the coming midterms are fascinating for a reason most commentators forget to mention: The Democrats have no issues. The economy is booming and America’s international position is strong. In foreign affairs, the U.S. has remembered in the nick of time what Machiavelli advised princes five centuries ago: Don’t seek to be loved, seek to be feared. The contrast with the Obama years must be painful for any honest leftist. For future generations, the Kavanaugh fight will stand as a marker of the Democratic Party’s intellectual bankruptcy, the flashing red light on the dashboard that says “Empty.” The left is beaten. For now, though, the left’s only issue is “We hate Trump.” This is an instructive hatred, because what the left hates about Donald Trump is precisely what it hates about America. The implications are important, and painful. Not that every leftist hates America. But the leftists I know do hate Mr. Trump’s vulgarity, his unwillingness to walk away from a fight, his bluntness, his certainty that America is exceptional, his mistrust of intellectuals, his love of simple ideas that work, and his refusal to believe that men and women are interchangeable. Worst of all, he has no ideology except getting the job done. The difference between citizens who hate Mr. Trump and those who can live with him—whether they love or merely tolerate him—comes down to their views of the typical American: the farmer, factory hand, auto mechanic, machinist, teamster, shop owner, clerk, software engineer, infantryman, truck driver, housewife. The leftist intellectuals I know say they dislike such people insofar as they tend to be conservative Republicans. Hillary Clinton and Barack Obama know their real sins. They know how appalling such people are, with their stupid guns and loathsome churches. They have no money or permanent grievances to make them interesting and no Twitter followers to speak of… In truth they are dumb as sheep. Mr. Trump reminds us who the average American really is… He might be realigning the political map: plain average Americans of every type vs. fancy ones. [T]he Trump-hater truly does hate the average American—male or female, black or white. Often he hates America, too.

My God! Where does one start? I suppose it’s futile to insist that despite writing a book on what a loathsome person Donald Trump is, I do not, in fact, hate America. Or to point out that there are many people who dislike Trump and go to church. Or to show that there’s no such thing as having your “only ideology” be “getting the job done,” because everything depends on which job you choose to do. Or to note that there are many extremely valid reasons to be horrified by Trump, like his intentionally malicious immigration policies and his deadly and irresponsible rejection of climate science. Or to deconstruct this idea of the “average American,” who always seems to be a goddamn farmer. (Besides, there are countless farmers, machinists, and factory hands who also think the president is a cruel and stupid man.) Perhaps I might note that I like vulgarity and bluntness, mistrust intellectuals, and enjoy Simple Ideas That Work. (Though I do find “American Exceptionalism” to be a downright silly notion. The only respect in which America is exceptional is that it is exceptionally convinced of its own exceptionalism.)

The whole assumption here, that there is a thing called “the left” and it is associated with Hillary Clinton, is just remarkably off-base. Gelernter does make one accurate observation, which is that the Democratic Party has lost touch with working-class people. But you know who else makes that extremely common observation over and over? The left! Bernie Sanders! Thomas Frank wrote a whole book about how this happened! Conservatives frequently conflate “the left” and “the leaders of the national Democratic Party,” which is false. It’s true that those Democrats have “no issues.” But here in New Orleans, there are DSA activists campaigning constantly for Medicare for All, serious immigration reform, a comprehensive climate policy, debt-free college tuition, etc. No issues? Are you serious? Have you read the full Black Lives Matter policy platform? Have you seen what Larry Krasner is doing? The left cares about a ton of really important things! (In an amusing twist, I actually think it’s Gelernter the Yale Professor who is out of touch with the reality of the country.)

But look: I spend a lot of time pointing out that bad conservative arguments are bad. So much so that people sometimes accuse me of shooting fish in a barrel. (Although fish are not entitled to clemency merely because they happen to inhabit a barrel.) This is the Wall Street Journal op-ed page, what do you expect?

I’m kind of alarmed, though, by just how far apart Gelernter and my worldviews are. I do not buy the idea that “too much partisanship” is the problem with American politics. But it is strange that this guy can see as completely self-evident something that to me seems completely absurd. Readers know that here at Current Affairs, we are all about dialogue and debate. But sometimes it really does feel as if we are living on completely different planets. To me, Donald Trump is obviously a corrupt and greedy sociopath. To Gelernter, he’s the spirit of America. (Though in one sense I do not necessarily dispute that.)

For the most part, my leftist friends do not take Wall Street Journal subscriptions, because they think it’s not worth reading. I disagree, because the WSJ is actually the most Marxist publication in the country (in that it believes wealth, rather than ideas, rules the world) and it’s a good way of tracking what the capitalists are up to. I understand why you’d write off the op-ed page completely. But part of me is still incredulous that an article this delusional can appear in the pages of a major newspaper.

As well as being incredulous, though, I’m also a bit frightened. If the leftists hate America, if they are pathologically committed to undoing the things that make the country great, doesn’t that justify taking them on by any means necessary? I don’t think I’m paranoid to be worried; Dinesh D’Souza has advocated draping leftists from lampposts (just the “antifa” of course) and unleashing the full force of the law on them, and of course Gavin McInnes now runs a violent right-wing gang. The extremely rapid rise of Bolsonaro in Brazil, who has been quite clear that he believes political murders can be a thoroughly good thing, has shown just how quickly a country’s politics can devolve.

I can’t quite believe that David Gelertner and I are looking at the same country. Everything he says is just so, so wrong! It sounds like his impression of the “left” is what he gets from hanging around liberal Yale professors (which, to be fair, might turn anyone conservative). There’s no use arguing with people who think this way, who are convinced you hate America and have contempt for farmers. The left should, for the most part, focus on building its own movement and ignore the torrent of nonsense that pours forth from the right-wing press. But sometimes it truly is amazing to me just how wide the ideological gap is, and what a monumental shift in perspective would be required to bring about humane and thoughtful politics.