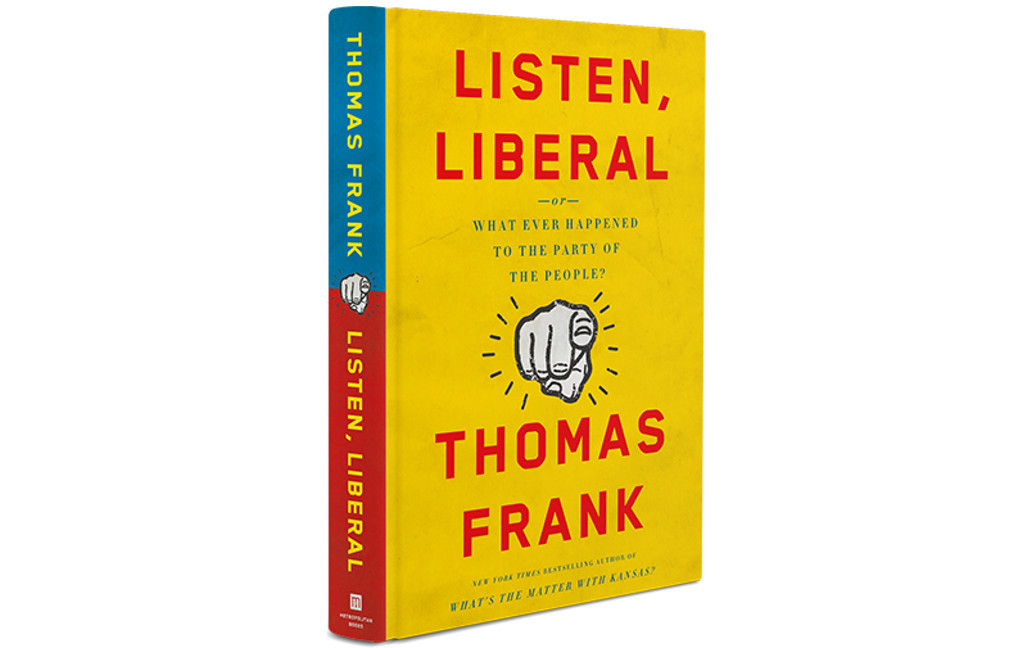 To understand the ascendance of affluent professional liberalism, one needs to understand how the labor movement shot itself in the foot…

In the 1990’s, The Baffler was the most reliable voice of intelligent dissent against Clintonian New Economy dogma. The journal’s founder, Thomas Frank, skewered the delusions of the new class of moneyed technocrats, giving courage and comfort to those of us inhabiting the (lonely) left opposition during that dark era. For many of us, Baffler fandom became devout. Over the years, I acquired a near-complete set of the journal going back to issue #4, and among my most valued possessions are two Baflfer t-shirts, Baffler pencils, and (most prized of all) an oft-used set of coasters stamped with the magazine’s bulldozer logo. To use one of Thomas Frank’s own expressions, my admiration for Frank became entirely commodified.

During the Bush years, however, some of us became mildly disappointed in Frank. Following a sadly typical leftist trajectory, his work became gradually less challenging. He began to inhabit, if not exactly the respectable center, precincts well within the spectrum tolerated by mainstream publishers. This was apparent in his mass-market bestseller What’s the Matter with Kansas, which introduced us to the remarkable transformation of Frank’s home state from populist radicalism to a now familiar brand of right-wing lunacy. While this provided much amusement and a certain amount of enlightenment, it was also made-to-order product for Democratic Party loyalists, who were spared from self-examination. Republicans were rendered as the demonic, irrational figures of MSNBC stereotypes. Frank’s follow-up work, The Wrecking Crew, also directed at the right, turned Frank’s critical klieg lights onto the inner circle of the Bush Republicans in Washington, examining how they successfully sold the same snake oil to the supposedly credulous rubes back home.

Both works contained some criticism of the Democratic Party. Frank lambasted the party for its inability to take electoral advantage of the profound suffering induced by Republican policies. Yet most of this criticism was pro forma, confined to a few pages buried beneath Frank’s somewhat voyeuristic tour of carnival freaks and holy rollers from the flyover states, and the sleazy Washington operatives who manipulate their trust.

With his new book, Listen, Liberal, Thomas Frank’s talents have finally been channeled where they belong: into systematically exposing the cynicism, capitulations and fecklessness of the Democratic Party. He points a finger at the party that claims to serve the interest of the working class, while actually benefitting from the very inequalities its members decry.

Along the way, we are provided with a full tour of recent political history. Frank takes us through the Clinton administration’s consolidation of the neoliberal approach: scandalously punishing poor African Americans with welfare reform and the Drug War, forcing the country to unwillingly ingest NAFTA, and maintaining Reagan-inspired anti-union statutes. Frank then shows how the Obama Administration carried on these themes, maintaining an obsession with Ivy League meritocracy that masked a craven commitment to putting corporations first. All this is capped by the bank bailouts, which Frank characterizes as “Clintonism on monster truck tires,” engineered by the same crew of Goldman Sachs alumni who set the system up to fail in the mid 90s.

For Frank, the central defining tendency of the modern Democratic Party is its domination by “professionals,” the highly-credentialed, data-driven Best and Brightest that Obama stuffed his cabinet with. For such people, “a great coming-together of the nation’s educated is the obvious objective of political work,” and “compromise” becomes the goal rather than the concession. Affluent liberals see themselves as concerned with “inequality,” but they have little interest in actually readjusting the balance of wealth in society.

Frank is particularly concerned to rebut the standard Democratic defense: that what looks like surrender to the wealthy is actually pragmatism, necessitated by the viciousness of Republican opposition. To test the claim, Frank takes us deep into Blue America, to my home state of Massachusetts, to see what liberals do with free rein over state governance. But instead of being the egalitarian paradise one should expect in a fully Democratized territory, the state is now home to the “the wealthiest municipalities in the nation, populated by engineers, lawyers and aerospace workers.” Cambridge has become a new startup hotspot, and MIT now functions primarily as “an incubator for business enterprises” including biotech industries “bankrupting America” through the marketing of “thousand dollar pills.” Under Frank’s gimlet eye, the Massachusetts miracle consists mainly of entrepreneurs, knowledge workers, and creatives “choking the life out of people,” getting rich and endlessly congratulating themselves for doing so. Martha’s Vineyard is the de facto capital of elite America.

Frank combines smart polemic with carefully wrought historical arguments to demolish the illusion of liberalism’s commitment to working people. Still, Listen Liberal is a bit perfunctory, for several reasons. First, the shadow of Frank’s former support for Obama hangs over his text. Frank now recognizes that he was taken in by Obama’s grandiose progressive-ish promises, “transformative” rhetoric, and “community organizer” background. Yet Obama was not, as Frank believed, “a hero who would put things right.” Instead, he saw that “this man in whom I and so many others had placed such faith, was in fact another ordinary consensus Democrat with ordinary consensus ideas.” It’s an honorable confession, particularly given that Frank is a political pundit, for whom never admitting error is a virtual sacrament.

But Frank assumes that “we” were all snookered by Obama. “We” presumably refers to those who share Frank’s leftist sympathies. But “we” were not all equally gullible. Some saw right away that Obama’s slogan-based politics of uplift were a product of the public relations industry masking the absence of any actual meaningful political ideology (indeed, the 2008 Obama campaign won multiple advertising industry awards, with Obama beating out Apple to become “Marketer of the Year”). As early as 1996, Adolph Reed pegged Obama as “a smooth Harvard lawyer with impeccable do-good credentials and vacuous-to-repressive neoliberal politics.” Noam Chomsky and Doug Henwood approached the “hope and change” phenomenon with similar skepticism.

In fact, two years into Obama’s presidency 5000 of us directed a petition at Frank himself, among other left leaders and media figures, criticizing them for according Obama the kid-gloves treatment. We argued that the failure of pundits like Frank to criticize Obama’s early policies and appointments was in part responsible for his endless capitulations to the big banks, his distinctly non-progressive policies on trade, immigration, and the environment.

Another, somewhat less recent, set of historical facts in Frank’s book deserves critique. Frank sees the early 1970’s as an important turning-point in Democratic politics, during which there was a massive shift in the party’s leadership class. As Frank relates it, after the disaster of the 1968 Democratic National Convention, George McGovern’s campaign initiated the beginnings of a de facto, slow motion coup “replacing workers organizations with affluent professionals” in the party bureaucracy. Frank suggests that this new arrangement, which shattered the New Deal coalition, was characterized by disdain for unions on the part of party leaders.

But this oversimplifies matters. There’s no doubt that among the McGovern circle, there was plenty of contempt for the “Archie Bunkers” in labor and the working class. Yet many of those in McGovern’s anti-war coalition were actually opposed to labor for good reason. The big labor unions had made a Faustian bargain with the state during the Cold War, and labor enlisted in the anti-communist crusade by blacklisting red unionists (and in doing so, firing their most effective organizers). Because the AFL-CIO leadership believed that U.S. global dominance would be good for American workers, it was always strongly supportive of U.S. foreign military action, and had never opposed a U.S. military conflict prior to the Iraq war. AFL-CIO President George Meany was complicit in the CIA-supported coup against Salvador Allende in Chile. And Meany’s successor, Lane Kirkland (like Meany an “unreconstructed Cold Warrior,” as Mother Jones noted), was one of the founding members of the “Committee on the Present Danger.” The CPD would provide many of Ronald Reagan’s closest and most hawkish foreign policy advisers, and Kirkland helped it put a working-class imprimatur on the burgeoning neoconservative movement. Teamster leadership was no better, longtime Teamster president Dan Tobin having worked hard to drive out any and all communists during the first half of the 20th century.

The labor leadership’s steady drift to the right is an important part of the explanation for the movement’s decline. Robert Fitch’s 2006 Soldarity for Sale documents how narrowly self-interested union leaders created ineffective, hierarchical and frequently corrupt institutions that ceased to meaningfully represent their members. Yet the names Meany and Kirkland appear nowhere in Listen Liberal. Nor do others like “Greedy Gus” Bevona, Jimmy Hoffa, and the rest of a long line of felons at the top of the union pyramid. Mentioning them would call into question Frank’s narrative of unions as the mere helpless victim of McGovernite technocrats.

Recognizing these unattractive realities is necessary. Some leftists, particularly academically-oriented ones like Frank (who holds a PhD in history), view unions through rose-colored glasses. Labor studies curricula usually adopt an excessively celebratory view, rarely criticizing unions and generally failing to note their longstanding penchant for capitulating to institutionalized capital while feathering their own nest. But unions are often the enemies of their members. Union bureaucracies, no less than political parties, can develop a “leadership class” that disregards the interests of workers. Examining labor history honestly means acknowledging these truths. Until we understand and account for, say, the way Cesar Chavez’s embrace of near-dictatorial control helped to undo the United Farm Workers, it will be impossible to create truly democratic labor power.

The need for independent criticism of unions has become especially important recently, given what happened during the Bernie Sanders campaign. Sanders was the most pro-labor candidate ever to seriously compete for the Democratic nomination, and he had a fighting chance of succeeding (if only a few Iowans had changed their minds!) But instead of embracing Sanders, labor unions almost unanimously shunned him, preferring to endorse a former Walmart board member whose first date with her future president husband involved crossing a picket line at Yale.

Yet the unions have mostly been let off the hook. Aside from a single story by Hamilton Nolan in Gawker noting labor’s “fuck up,” not a single major left media outlet has mentioned or criticized this colossal failure. But in retrospect, the unions’ failure to support Sanders should be seen as an almost unbelievable display of institutional self-immolation, or at least major cluelessness. A chance at a labor president was blown almost entirely thanks to the labor movement. The victimization story, as adopted by Frank, prevents the recognition of unions’ complicity in their own destruction. 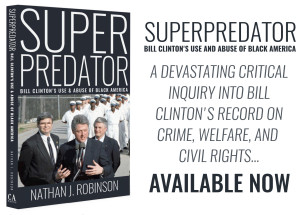 As Thomas Frank was writing Listen Liberal, he must have felt somewhat despondent. The Democratic consensus was so deeply entrenched that the book could only be a hopeless attempt to shout into the void. The nomination of Hillary Clinton, after all, was originally expected to be a coronation. But now, post-Sanders, Frank’s indictments almost have a quality of déjà vu to them. Rather than being confined to the pages of niche magazines like the Baffler, criticisms of the Democratic leadership’s cynical capitulations and sellouts have been widely aired. They have been issued from the lectern of stadiums across the country by a candidate who (with slightly better luck and less suicidally-dysfunctional labor organizations) might have become the country’s first Socialist President.

It’s nothing against Frank, then, to say that his book is no longer as invigorating as it could have been. The times have caught up with his criticisms. Finally, attention is being paid to the Democratic Party’s failures to provide a meaningful opposition. All we need now is a functional labor movement. Then, perhaps, the liberals would have to listen.