Someday Donald Trump Will Be As Respected As Ronald Reagan 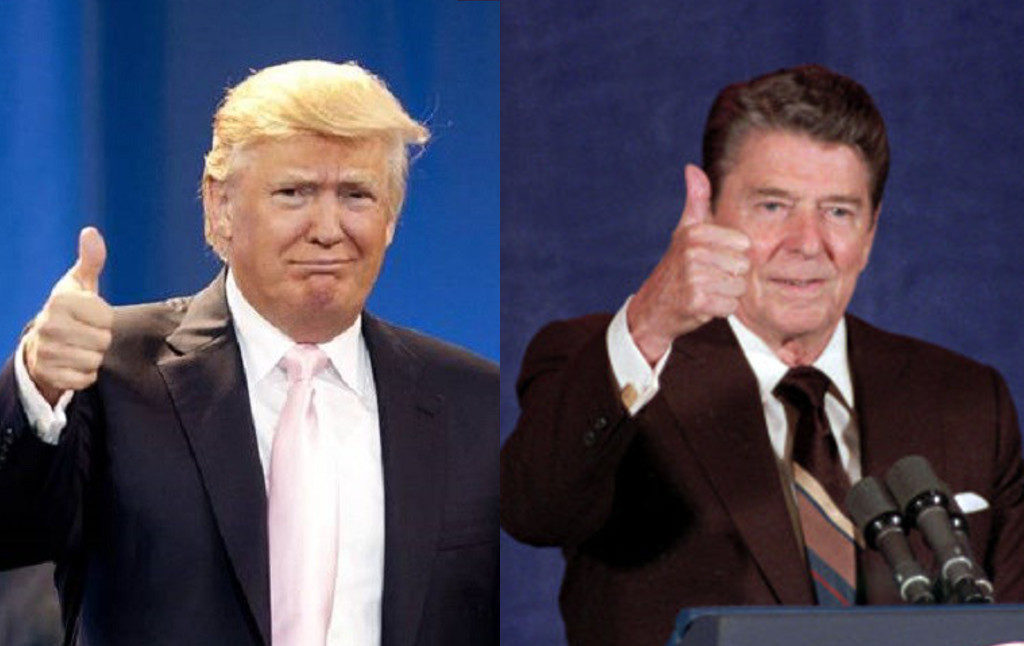 The United States is very good at forgetting. When it fulminates about Iran’s nuclear program, it forgets that it literally built Iran’s first nuclear reactor. When it treats North Korea’s anti-Americanism as deranged, it forgets that time we flattened the entire country by dropping 32,000 tons of napalm on its cities. When a terrorist says he tried to blow up Times Square to punish America for drone strikes on Muslims, the country wonders what he could possibly be referring to. When the country denounced Saddam Hussein for supposedly possessing weapons of mass destruction, it forgot that it had previously knowingly provided military aid to Saddam Hussein while he was launching chemical attacks on Iranians. (Foreign Policy said this made the U.S. “complicit[] in some of the most gruesome chemical weapons attacks ever launched.”)

One aspect of this national forgetting is the rehabilitation and praise of truly horrible people. Exhibit A in this is, of course, Henry Kissinger, who (1) helped Richard Nixon prolong the Vietnam War in order to win an election, resulting in the violent deaths of countless Vietnamese children (2) organized the illegal dropping of millions of tons of bombs on Laos and Cambodia (3) offered tacit U.S. support for mass murder in East Timor, and, well, the list goes on. Now Kissinger is a friend to Republican and Democrat alike, with Hillary Clinton gushing about his books and “human rights” advocate Samantha Power taking him to Yankees games.

But Kissinger is only an unusually striking example: powerful men are constantly having their misdeeds overlooked, or being treated as humane and decent without any evidence to show that they are. George W. Bush, of course, now enjoys a high favorable rating among Democrats, with everyone having quickly forgotten the half-million deaths he is responsible for or the various people his administration tortured. Bill Clinton manipulated and betrayed black people throughout his career, using Haitian suffering as a photo op and denying the Rwandan genocide, but was portrayed as the first black president. Bob Kerrey participated in the mass slaughter of women and children but was made a U.S. senator and university president. The severity of the offenses ranges widely, but the pattern is the same. Hugh Hefner treated women as concubines and was warmly eulogized for somehow liberating them. Bill Kristol and Max Boot penned intellectual justifications for a war crime, and they’re still respected commentators. Or just look at Andrew Jackson, not just responsible for owning slaves and killing indigenous people but for a forgotten atrocity against black people that nobody ever talks about! (Also: I don’t mean to get all “identity politics” on you, but these Respectable Monsters are usually, let’s be honest, rich white men.)

Just look at Ronald Reagan: Reagan’s administration famously supported the Contras in Nicaragua (through selling missiles to the Iranian regime in violation of an arms embargo!) and mass murdering guerrillas in El Salvador. But he also provided tens of millions of dollars to the Guatemalan military as they literally committed genocide against the country’s indigenous people. (That genocide doesn’t count as something America forgot, because we never bothered to notice it in the first place.) Today, Ronald Reagan is routinely voted the greatest American president, and even the greatest American of all time, despite having done little beyond presenting an affable and reassuring presence on television.

I suspect that Donald Trump, too, will have his day of redemption.

Last night was Trump’s State of the Union speech. It was part political boilerplate, part scary rhetoric about immigrants and terrorism, and part bragging about the stock market and the unemployment rate. Because Trump stuck to his script, however, the address was not full of the vulgar, incoherent digressions that usually distinguish Trump’s speech. It felt ordinary. According to one poll, it was positively received by nearly all Republicans and almost half of Democrats. And that should be a serious concern to those of us who find Trump horrifying. The next stop beyond “ordinary” and “benign” is “presidential.”

Of course, there were the usual flurries of fact-checks from pundits who detest Trump’s crass car-salesman personality. But even Nick Kristof, in conducting his most “brutal” possible examination of Trump’s statements, conceded that:

“Teleprompter Trump goes over so much better than Twitter Trump. If the Republican National Committee confiscated the president’s phone, Republicans would be much better off. We all would be!”

Would we be, though? Because Teleprompter Trump and Twitter Trump don’t actually do anything differently, they just present themselves differently to the public. Twitter Trump looks like an ass, while Teleprompter Trump looks like… a president. In Kristof’s statement, we can see a hint that if Trump cleaned up his act, if he followed conventions about decorum and dignity, many who loathe him wouldn’t have nearly as much of a problem with him, even if he still kept the same number of immigrant children in detention centers.

Trump also happened to call up that magical word: bipartisanship. “A call for bipartisanship” ran the headline in the next day’s Washington Post. But as Luke Savage has written here before, bipartisanship is a dangerous word: the things that “both parties” can agree on often end up being horrible, like further bloating the military or increasing government surveillance powers. And sure enough, when we look at Trump’s speech, there is good reason to be worried. Trump called blandly for consensus and collaboration, saying “I am extending an open hand to work with members of both parties—Democrats and Republicans—to protect our citizens of every background, color, religion, and creed.” But immediately before in the speech, he had been scaremongering about MS-13 and demanding a “fix” to immigration and more support for ICE and the Border Patrol.

Any bipartisan immigration policy that gives an inch to Trump will probably be a humanitarian disaster. As my colleague Brianna Rennix has shown, the Trump administration’s plans will hurt vulnerable people fleeing violence. They will tear families apart. They are fundamentally based on a callous indifference to the lives of non-citizens. It’s so bad that The Wall is actually the least worrisome aspect of the Trump immigration agenda. Democrats need to resist calls for Consensus on this, because immigration needs to be seen as the fight that it is.

An unbelievable amount of words has been produced from liberals and leftists on why Donald Trump is an aberrant, incompetent, and evil man who should not be running a country. And there have been plenty of calls not to “normalize” Trump by forgetting that he is these things. For my own part, I have sometimes suggested the opposite: that Trump is actually not terribly different from many other U.S. presidents in his actions, and that he would actually fit well into the contemporary Republican party if he wasn’t such a vulgarian.

Perhaps what I should most fear, though, is that people start to agree with that, to see Donald Trump as just another president. As we continue the inevitable process of getting used to him, perhaps people will start to forget why they were ever outraged, and begin to think “Well, you know, he’s not so terrible after all. And after all, he believes in bipartisanship.” This is what has happened with George W. Bush.

It’s also what happened with Ronald Reagan. Reagan, too, was initially seen as a clown and a ninny, even among Republicans. Frank Rich, in a long essay comparing Reagan’s political ascent to Trump’s, quotes a Republican consultant saying that “the other major GOP players — especially Easterners and moderates — thought Reagan was a certified yahoo.” But once Reagan defied expectations, everyone simply lied and pretended they’d been with him from the beginning. Reagan was an airheaded actor, a man as unpresidential as they come. But being seen as “unpresidential” is easily cured by spending a few years as president. As the reality adjusts, so do people’s understandings of the term.

Don’t count on Trump’s lies (frequently, the main thing he is critiqued for) to prevent him from being respected. After all, Rich says:

“[Reagan routinely disgorged] fantasies and factual errors so prolific and often outrageous that he single-handedly made the word ‘gaffe’ a permanent fixture in America’s political vernacular. He confused Pakistan with Afghanistan. He claimed that trees contributed 93 percent of the atmosphere’s nitrous oxide and that pollution in America was ‘substantially under control’ even as his hometown of Los Angeles was suffocating in smog.”

Rich collects evidence of a “proto-Trump” style evident in Reagan, who was also willing to engage in shows of “bipartisanship,” and who was written off by Jimmy Carter because he had a “penchant for offering simplistic solutions to hideously complex problems.” He was treated by liberal commentators as “not a serious candidate for president” and “a shame and embarrassment for the country.” He was mocked as “the Candidate from Disneyland,” and someone apparently tried to make the name “Ronald Duck” stick. (Even that has its contemporary echoes.)

None of this prevented Reagan from being treated as an ordinary president in the long run. And not even “ordinary”: Reagan is revered. He’s not just “a president” or “a good president” but the best president, better than the one who founded the country or the one who ended slavery or the one who defeated Hitler. (Actually 20 million Russians defeated Hitler, but let’s not quibble.) The country’s five-second collective memory means that in retrospect, Reagan is not seen how his contemporaries saw him, but how he portrayed himself. It doesn’t matter what you are, it matters what you pretend to be, and if you stick with it long enough people will probably start to believe it.

Donald Trump would like to displace Reagan as the Greatest President of All Time. I’m sure that’s how he’ll think of himself, I’m sure that’s how he’ll portray himself. And why shouldn’t the same process benefit him that has benefited all the rest of them? It won’t happen this year, or next year, but twenty or thirty years from now? I can see it. The Trump self-myth will have displaced the reality, just as it has through his entire career.

You might laugh. America will never treat some callous and stupid fool as a brilliant man. This country could never venerate a man so silly, one who offers people nothing but myths and false promises. But it’s worth remembering what Ronald Reagan’s campaign slogan was: Let’s Make America Great Again.