An Exciting Night For The Left 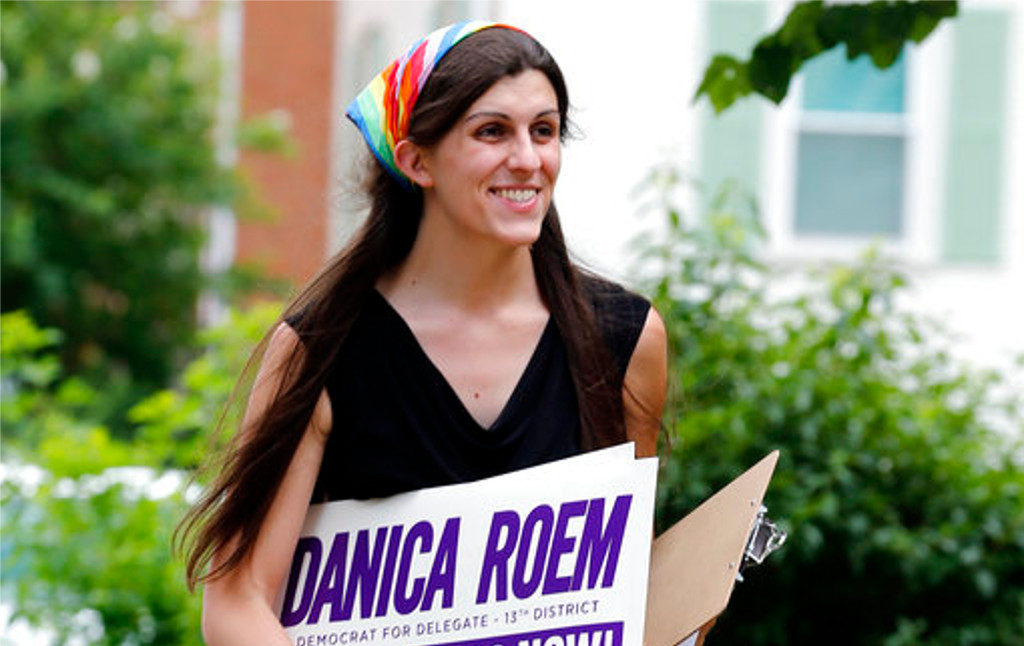 If you’re a leftist, it’s easy to spend a lot of time dispirited and pessimistic. But last night offered a little bit of hope and consolation, as voters across the country repudiated the Republican Party, and local socialist candidates did better than anyone could have expected. Ordinarily, off-year elections don’t produce much news, since the races are mostly local and comparatively less “significant.” But this one was worth paying attention to: the results are a very encouraging sign that as the Republicans flounder on their healthcare and tax plans (which people would hate even if they were implemented), there’s a formidable opportunity for progressives to take power.

Let’s review last night’s results. The contest that has drawn the most coverage was the Virginia governor’s race, in which boring milquetoast Democrat Ralph Northam (who, no article should ever fail to note, voted for George W. Bush not once but twice) was up against horrifying Trump-esque Republican Ed Gillespie. Northam defeated Gillespie 54-45, which is a very satisfying margin. Then Donald Trump immediately threw Gillespie under the bus, since Gillespie is now a loser.

Something else happened in Virginia, though: the Democratic candidate for Lieutenant governor, Justin Fairfax, became the second African American elected to statewide office in Virginia history. More important than his race, though, are his beliefs: Fairfax was a progressive whose environmentalist stance against new pipeline construction alienated him from the Democratic Party, to the point where they even left his image off campaign flyers. Yet Fairfax beat the Republican candidate by a healthy margin, proving that you don’t actually have to compromise your values in order to win.

The other most-noted story was Philadelphia District Attorney’s race, in which the Unelectable Larry Krasner, a career defense attorney and critic of mass incarceration who supports Black Lives Matter and the ACLU, beat the Republican candidate by 40 percentage points. Krasner has been called an “ultra-progressive“: the police union can’t stand him, and he was considered the least likely person to ever be chosen as a prosecutor. Again, there’s a lesson here about not compromising your principles: Krasner was clear on what he stood for, clear on what he intended to do, and people responded positively even though he was well outside the “mainstream.”

Of course, Krasner’s tenure is going to be worth paying close attention to: it has significant implications for how much change it’s possible to accomplish “from within.” Legal scholar John Pfaff has argued that decisions by prosecutors were a key driver of mass incarceration, meaning that if you could get better prosecutors, you might be able to significantly reduce the number of people being sent to prison. But many on the left believe, not without good reason, that those who join an institution with a deeply entrenched culture will be far more shaped by that institution than it will be shaped by them. The Audre Lorde line “the master’s tools will never demolish the master’s house” is used to suggest that the possibilities for internal reform are limited. Krasner is an important test case. We’ll see what happens.

For socialists, there was plenty of encouraging news from around the country. Lee Carter, an Our Revolution candidate and member of the Democratic Socialists of America (DSA), was elected to the Virginia House of Delegates despite receiving hardly any support from the state Democratic Party. It’s an even more stunning victory when you realize that Carter actually managed to defeat the House Majority Whip, one of the “most powerful Republicans” in the state! (Carter didn’t try to soften his politics, either: he literally filmed himself feeding a questionnaire from the National Right To Work Committee into a shredder, in front of a Union Strong sign.) Jabari Brisport, another Democratic Socialist who is totally open about the need to wage war on the super-wealthy (“If the rich can’t play nice, we take away their toys”), got nearly 30% of the vote in a New York City Council race even while running on a third-party ticket. Our Revolution candidates Will Mbah, Ben Ewen-Campen and J.T. Scott are now on the Board of Aldermen in Somerville, Massachusetts, having defeated incumbents. DSA-backed Nikuyah Walker is now on the Charlottesville City Council, and Seema Singh Perez is on the Knoxville City Council. All in all, at least a dozen DSA-backed candidates won races across the country. I am not actually sure, but my guess is that this might be more socialists elected to public office in the United States in nearly a century. (In the early 1900s there were dozens of socialist mayors across the country, an important part of left history that is not nearly discussed or learned from enough.)

As The Intercept reports, there was also great news out of Georgia:

Two state house seats were up for grabs, both being vacated by Republicans. Democrats won them both. One of those Democrats, Deborah Gonzalez, raised $55,000 for her campaign; her opponent failed to best her even after raising around $200,000. Also in Georgia, Liliana Bakhtiari, a Working Families Party and Our Revolution-backed queer Muslim woman defeated an incumbent Atlanta city councilwoman.

Last night was also a major victory for transgender people. In Virginia, Democrat Danica Roem became “the first openly transgender person elected and seated in a state legislature in the country, beating a 13-term Virginia incumbent who called himself the state’s ‘chief homophobe’  and who introduced a ‘bathroom bill’ earlier this year that would have restricted the bathrooms his opponent could use.” And in Minneapolis, Andrea Jenkins became the first openly transgender woman of color to be elected to public office after winning a City Council race. These victories are truly historic: Americans still hold more unfavorable attitudes toward transgender people than almost any other group. They remain among the most discriminated-against and mistreated segments of society. Having openly transgender people serving in office is an important step toward achieving full social equality.

There were policy victories yesterday, too. Despite opposition from the state’s lunatic racist governor, Maine voters approved a Medicaid expansion initiative, with 60% in favor. And the City Council of Montgomery County, Maryland unanimously approved a $15 minimum wage. And there was one small-scale but scrumptious victory: a New Jersey county politician who shared a sexist meme on Facebook was defeated by a 32-year-old black female hospital worker who had never held office, but decided to pay him back for dissing the Women’s March.

What should we make of last night’s results? The obvious conclusion, the one that has made the headlines, is that Democrats are bouncing back and Republicans should be worried. But it also seems like something more than that. As Time correspondent Charlotte Alter put it, “A trans woman beat the guy who introduced the bathroom bill. A gun victim’s boyfriend beat a delegate with an ‘A’ grade from the NRA. A civil rights lawyer who sued the police department just became the top prosecutor in Philadelphia. Something’s happening here, folks.”

There are also implications for the ongoing divisions among Democrats and progressives. Some will see Northam’s victory in Virginia as proof that Democrats can win if they run centrist candidates who don’t rock the boat too much. They may also double down on the strategy of running against Donald Trump and the Republicans, rather than for a particular set of policies. This was the tactic deployed by Jon Ossoff in Georgia and by Hillary Clinton.

But I think it’s a mistake to focus solely on Northam’s election, which a lot of the press coverage seems to be dwelling on. The interesting case, to me, is that of Lt. Governor Fairfax, who won despite being dumped by the Democratic Party over his environmentalism. If Northam is evidence toward the theory that you can succeed through centrism that defines itself by its opposition to Trump, Fairfax, Krasner, and the Socialist Twelve are proof that you can still win even if you buck the Democratic consensus and stay true to your progressive values. You can interpret this election in two different ways, and both establishment Democrats and Our Revolution socialists will see it as proof that they are right. Personally, of course, I’m an Our Revolution socialist, and I think Jabari Brisport’s huge vote share is far more interesting than Ralph Northam’s outright victory, since I don’t just want to get people with a “D” after their name elected, I want people who are actually going to try to readjust the balance of wealth and power in the country. As with the most recent British election, you can sometimes tell more about the future of the left from a loss than a victory. Last time, socialist candidates were fringe. This time, Brisport got nearly 1/3 of the vote. What happens next time?

There is another important takeaway, one I think nearly everyone can agree on: voting does matter. If people hadn’t voted, we wouldn’t have two new transgender elected officials, a new Democratic governor, and a slew of radical city council members. While I share my colleague Vanessa Bee’s position that even if you don’t vote, you still have the right to complain, I think the Democratic Socialists and Bernie Sanders have the correct position on electoral politics: be independent from the Democratic Party apparatus, but be willing to work within the party if it helps advance your cause. I generally think successfully building third-parties is nearly impossible (but then again, Brisport did very well as a Green Party candidate). I have confidence that millennial socialists can successfully swarm the Democratic Party.

And not only can they, but they need to. Yesterday, even as voters were going to the polls to elect Democratic candidates, the Democratic Party hit its lowest approval rating in 25 years. Donald Trump is so widely loathed that it is possible to run a purely anti-Trump candidacy and do quite well. But it’s also very concerning that nobody actually seems to like the Democrats, and “lesser of two evils” thinking seems to prevail. In a functional political system, people shouldn’t be voting for you because they feel like they have to, but because they actually like what you stand for.

We can debate the implications of yesterday’s elections more in the weeks and months to come. For now, let’s just unify and celebrate. Republicans and their horrible political agenda got trounced. Leftism did well. Hip hip hooray!

The more resources Current Affairs has available, the more we can do to report on and analyze local political races. Independent media is more crucial than ever. Current Affairs is entirely reader-supported: please consider subscribing or donating today.