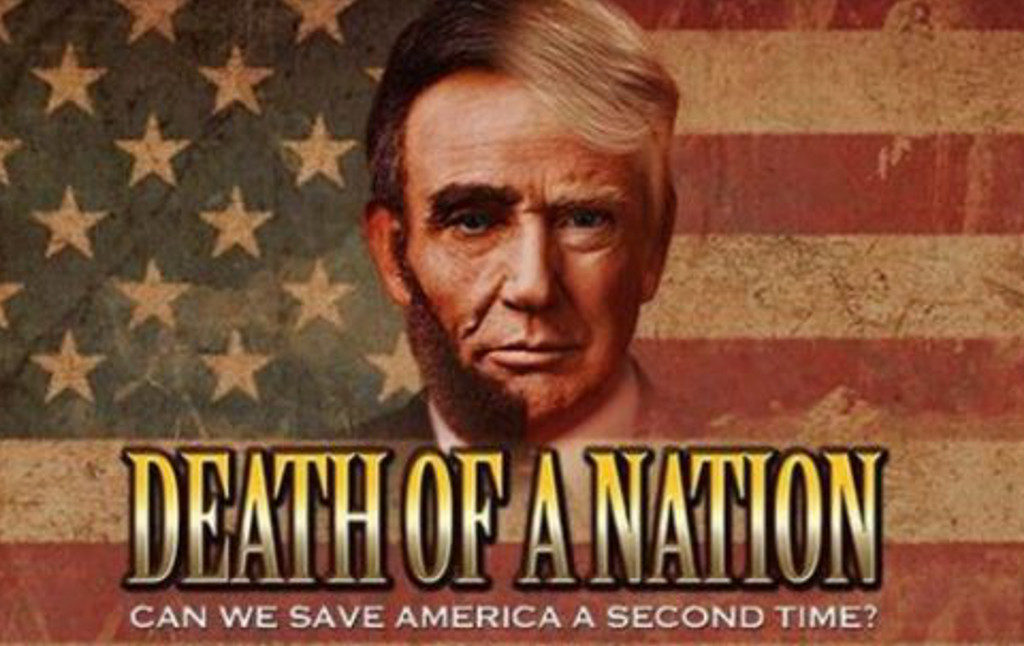 Another day, another bad book in the mail. This time, it’s Dinesh D’Souza’s new Death of a Nation, which argues that today’s Democratic Party is attempting to turn the United States into a giant slave plantation and Trump may be our Abraham Lincoln. No, I am not joking, read the damn thing for yourself:

My story is a novel genealogy of American politics that exposes the progressive left [and] the Democratic Party as the party of the plantation, the party of enslavement. The plantation—viewed as a complete ecology involving exploited inhabitants, rented overseers, and the plantation boss or “Massa” running things from the big house—defines the Democrats not merely in the past but also in the present.

In the course of making this deranged argument, D’Souza offers some of the most offensive comments he’s ever made, in a career littered with them, such as “The Black Caucus is part of the overseer class. These guys don’t want people to leave the plantation.” Honestly, what kind of person compares Civil Rights heroes to the people who beat and raped their ancestors? Then he rehashes the central argument from his last book and his recent documentaries, which is that the history of the Democratic Party from Andrew Jackson to LBJ to Barack Obama is a history of racism and authoritarianism, which the noble Republican Party has fought against since Lincoln. The last book purported to demonstrate that Democrats are Nazis. This one aims to demonstrate that Democrats are slaveholders.

I am not going to dissect this book at length, because I already combed through the previous one. This one shares many of the same historical examples, and it also shares the same central catastrophic logical flaw: D’Souza focuses on proving that “Democrats” have always been racists, but if you’re an independent leftist or libertarian socialist who has absolutely no loyalty to the U.S. Democratic Party, this argument has nothing to refute your politics. Noam Chomsky would agree with nearly everything D’Souza says about the crimes of Jackson, Wilson, FDR, LBJ, and Obama, while rejecting the ludicrous conspiracy theory.

But you might think still think I’m taking D’Souza too seriously even by minimally engaging with his argument. After all, this is a man who has said: “One way to be effective as a conservative is to figure out what annoys and disturbs liberals the most, and then keep doing it.” He knows liberals are horrified when you suggest that John Lewis is a plantation master and Trump is Lincoln. So that’s exactly what he says. Why read a book that is written to be inflammatory? What good could this do? Ignore this trash. People have asked me why I spend so much time taking apart bad right-wing books.

I’d first answer by asking you to look at Brazil. Yesterday, a far-right candidate, Jair Bolsonaro, won 46 percent of the vote, significantly outperforming expectations. Now, he stands poised to potentially take over the country. That would be a disaster; Bolsonaro has spoken admiringly of the country’s former military dictatorship and talked of staging his own coup and becoming a dictator himself. He’s also an open homophobe who has said he would be “incapable of loving a gay son” and that he would beat a gay couple if he saw them kissing in the street. It’s scary stuff. And yet, nearly half of Brazilian voters have embraced him.

It’s the same thing that happened here with Trump, although perhaps even worse. And the implications are the same: The left needs to get its act together, pronto. The implications of far-right governments are catastrophic for the climate and for human rights. Unless we reverse the trend, a lot of people are going to suffer. That means thinking practically about how to diminish the effectiveness of right-wing movements.

I think that means it’s no longer possible to avoid “engaging” their “ideas.” Like it or not, their ideas exist. They need dealing with. This is not because I think I can persuade Dinesh D’Souza that he is wrong; after a whole career of this stuff, there is no combination of words that any person could speak that could cause him to exercise more empathy. I do, however, think I could persuade a number of people who like Dinesh D’Souza. And such people do exist: His film about Obama was one of the highest-ever grossing documentaries, taking in $30 million, and his books have been bestsellers. He has an audience.

I also want to give people on the left the arguments necessary to speak productively with people whose politics horrify you (no, I do not call them “people you disagree with,” because I understand that it is often more than mere polite “disagreement”). Jerry Saltz of New York magazine recently encouraged liberals to “shun any Republican family member you have. Until this president is gone. You don’t need to tell that family member that you are shunning them. Just stand up for your country very close to home.” I think Jerry Saltz is lazy. What does shunning do to them, except confirm their worst prejudices and drive them even further to the right? I think this kind of thing is dangerous, actually; D’Souza’s The Big Lie gave me the chills, because of the way it treated leftists as almost a different species, an amorphous evil in need of destruction. The less contact people have with leftists, the easier it is for them to think of them this way.

I can already hear the materialists screaming: No, don’t you understand? Politics is not about ‘ideas.’ It is about power. You don’t win by persuading people using rational argument. Trying to reason with fascism is pointless. But I think this perspective is wrong in some important ways. The importance of ideas is actually underrated; in order to join the left, people have to know what the left is, and in order to know what it is, they have to have been communicated with somehow. It can be argued that the United States owes its very existence to a single pamphlet, Thomas Paine’s Common Sense, which made a rational case for independence and rebutted the monarchist case.

One reason people turn conservative is pure self-interest, with the ideology itself just a flimsy post-hoc rationalization. But another reason people turn conservative is that they haven’t actually heard persuasive left responses. Some days I even think that what drives people most in politics is the “hm, that seems to make sense” factor. If someone comes up with even a semi-plausible narrative, and nobody is around to contradict it, a lot of people will buy it. If someone comes along with a better narrative people will buy that. So people believe Jordan Peterson because at first he seems to make sense. If someone comes along making far more sense, a lot of them will start believing that instead. The justifications for monarchy sort of made sense until Thomas Paine came along and made far more sense. (I realize that this is a weird folk theory and somewhat inconsistent with a number of other things I also believe, so treat it as purely tentative, and I think at best it’s only part of the whole.)

I do not think that “pure reason” can drive success in politics, but I do think that many people can be reasoned with. Not Congressional Republicans, of course, and it was Barack Obama’s fundamental mistake that he thought everyone could be reasoned with, instead of reasoning with the reasonable and getting them to help you fight the unreasonable.

I know that some people can be reasoned with because I’ve talked to them. I’ve spoken to people whose friends and relatives have started to like Ben Shapiro or Jordan Peterson a little less after reading the thorough Current Affairs discussions of them. Why review bad books, then? Because people read those books, and unless someone has explained why they’re bad, the people who like them are going to think they make sense.

You can also learn a lot from reading bad books. Under extreme editorial duress, my colleague Brianna Rennix read Ann Coulter’s book on immigration. She did not enjoy it, and concluded that it was morally reprehensible. But reading Coulter’s book can also show us just how people are manipulated into xenophobia, and by understanding how the right pitches itself, we can get a better idea of how the left should respond.

Even Dinesh D’Souza’s books can be surprising. Last time, I was shocked that he spends so much time talking about slavery and the genocide of Native Americans. (Which he simply blames on Democrats.) This time, I was struck by an oddly compelling passage in the preface, in which D’Souza describes his first experiences in the United States as a young Indian immigrant:

I experienced America through a series of distinctive rituals. These included my first Rotary dinner during which I stared wide-eyed at my plate, bearing ingredients —namely an absurdly large sirloin steak covered with mushrooms—I had neither tasted nor seen before; a raucous tailgate party preceding the Patagonia Union High School homecoming game; the abundance of American grocery stores which had more types of cheese and more types of ice cream that I knew existed; the Sadie Hawkins dance, which included some of my early life’s memorable embarrassments, and several church potluck dinners, including one in which a fellow showed me the odd sight of In God We Trust imprinted on his $20 bill. I remember cheering with my host family at a Little League baseball game; going to malls and restaurants and noticing the funny habit that people have of calling each other “sir”; seeing the Grand Canyon on an exchange student trip that included several strange signs that said “Adopt A Highway”; sampling Girl Scout cookies; attending what at the time was described as a “shotgun wedding,” featuring incredibly two students from my senior class; the sphinx-like college application process which involved me taking something called a standard standardized test and asking bewildered friends and family in India to write over-the-top recommendations comparing me to the great figures who had ever lived. and waving the flag at a 4th of July fireworks and cookout. This for me was America, America as I first discovered and experienced it.

Of course, soon young Dinesh would be off to Dartmouth, where he would be making fun of black speech patterns and outing members of the Gay Student Alliance. But, isolated from its hideous context, this would be a rather charming and relatable set of memories. When I reviewed The Big Lie, I was struck by how well D’Souza manages to make himself sound sensible and modest even as he advances a patently insane argument. It’s important to understand how the right’s rhetoric works, the methods that are used to build audiences, even if the conclusions are repellent and nonsensical.

I don’t think all, or even an especially substantial portion, of my writing should be reviews of bad books. For one thing, that would involve considerable pain for me. But I don’t think the left can treat this stuff like it doesn’t exist and isn’t worth our time. That may once have been true. But with Trump and Bolsonaro poised to boil the earth, I want to give leftists all the intellectual firepower necessary to compellingly counter the other side.

For plenty of reviews of bad books, see my new essay collection The Current Affairs Rules For Life.