Shutting Down The Memory Factory 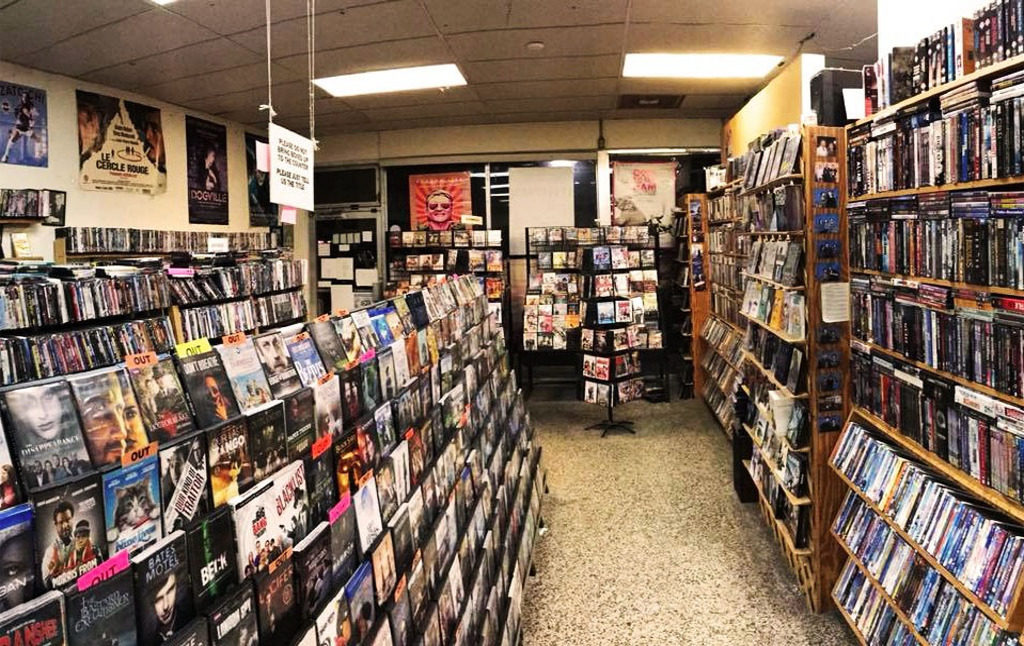 When the video store is a cultural center, losing it is painful…

Video Renaissance finally shut down this week. It outlasted Blockbuster and nearly every other video store by about half a decade, which is impressive. But it still can’t really console me.

When I was in high school, Video Renaissance was an oasis for misfits. For the most part, Sarasota was sleepy, conservative, and suburban. The guys at Video Renaissance were none of these things. They were excitable, proudly left-wing, and cosmopolitan. They also had a particular sensibility that I’ve come to admire: They loved culture but they weren’t pretentious about it. They were omnivores. Yes, they could talk to you about German Expressionism, but they didn’t at sneer anyone who was just in the mood for something loud and violent. The only people they couldn’t stand were the inverse snobs: the people who went “Oh, I can’t watch films in black and white.” The one requirement for their friendship: You had to be curious and a little offbeat.

I’ve been trying to think of an accurate way of conveying what it was like for my high school self, in a pretty boring tourist town, to come across Video Renaissance’s archive of 50,000 classics, cult movies, foreign movies, popular hits, and weird experimental what-have-you. The first comparison I thought of was the cave that Roald Dahl’s “BFG” lives in, where the BFG has endless shelves containing the children’s dreams he has collected, all in labeled jars. Going to Video Renaissance was like getting to prowl through the BFG’s dream collection.

The revelation that Video Renaissance gave me as a teenager was that the world is weird. Sarasota was—not entirely, but in large part—comprised of big box stores, chain restaurants, strip malls. I don’t mind these things much, but they were formulaic, predictable. Most of the blockbuster movies in theaters were similar: often fun, but nothing too unexpected ever happened in them. Video Renaissance showed me that the outer boundaries of the human imagination were far beyond anything I had previously seen. The store’s logo was a picture of the eyeball from Salvador Dali and Luis Bunuel’s Un Chien Andalou. In the film (spoiler alert) the eye gets sliced in half with a razor. It was a fitting analogy for the general experience.

In 2005, when I was in 10th grade, the five top-grossing films were all remakes or sequels. But in the depths of the video store, there were stories that had never been told before. How about this one?

A young man named Joseph visits a dilapidated Sanatorium to see his father Jakob. On his arrival, a sinister doctor informs him that his father had stopped breathing but hasn’t died yet, perhaps due to Joseph’s arrival which may have halted time in the sanatorium. Joseph undertakes a strange journey through the many rooms of the sanatorium, each of which conjures worlds composed of his memories, dreams and nightmares.

Not your cup of tea? They weren’t always mine. But over the years, I saw movies about: a black man who accidentally becomes the head of an advertising agency and introduces radical liberationist politics to Madison Avenue, a couple who decide to make money through a cannibalism business, a suburban mom who develops an insatiable taste for murder after her son is disparaged at a parent-teacher conference, an architect who slowly becomes obsessed with stomachs while preparing for an exhibition, a bumbling older gentleman who finds himself perplexed by an ultra-modern city full of gadgetry, a man who is mysteriously forbidden to leave a charming but eerie model village, two women who find themselves swapping identities and must then uncover the secrets of a haunted house, a racist who wakes up one day to find himself black, a recluse who lives in the Houston Astrodome and is trying to turn into a bird but becomes suspected of murder, and a corporate executive who is driven mad by a talking boil that grows on his shoulder. There were sub-subgenres like “space western comedy musical. And no, not everything was weird for the sake of weird. Plenty was just simple and beautiful: the sweet and understated romance of Brief Encounter, the colorful cast of rural Italian townspeople in Amarcord. None of this would have crossed into my consciousness if I hadn’t had Video Renaissance. I would have had far less interesting nightmares, been far less creative and empathetic.

Some civilizations have preserved their cultural practices for hundreds of years. That doesn’t really happen under capitalism, where everything you love will be eaten alive the moment it ceases to be economically efficient. The video store had ceased to be “efficient,” and thus it had to be destroyed. I don’t think a single person was surprised: If anything, they were amazed it still existed at all. I’m under no illusion that there’s any world in which we could keep such places; the technology changes, and it’s impossible to stubbornly resist the inevitable spread of streaming video out of pure nostalgia for obsolete ways of doing things.

But I don’t think it is simple nostalgia. I genuinely feel worse off now, because I don’t have a place to go where friendly faces will be waiting to talk to me about movies. (And give me homemade cookies, which often happened at Video Renaissance.) A social space is gone, the cookies are gone, and all of the serendipitous interactions that would have happened in that place will now never take place. One kind of “efficiency” has been maximized even as “the efficient production of social interaction and joy” has been diminished.

The closure of Video Renaissance kind of feels like the closure of a “memory factory.” It was a place where memories are made. Now where will we make the memories? What people always tell me is that “things change,” new things emerge to replace the old things, it will just be different now. But I don’t know: When I go back to Sarasota, it’s going to feel really disturbing. One of the things that made it feel like “home” was going to stop by the store and talk about old movies. I don’t know where I’ll go now. There isn’t anywhere to go.

I know that as I get older, I’m probably likely to become curmudgeonly. I will grumble about buildings getting knocked down. I will talk about how things used to be back when everyone was cool and beautiful and people knew things and the world didn’t suck. This is all in my nature. And people will tell me that you can’t hang on to the past, that all things must pass, you have to accept the destruction of everything you’re sentimentally attached to as the price of progress, etc.

However, I’m actually beginning to conclude that the whole dismissal of “nostalgia” is simply a mistake. Some people (especially architects!) treat it as an irrational impulse, and think there’s something unduly sentimental about preservationists and people who get sad when half the buildings in their neighborhood are flattened and turned into high-rise condos. But what we call “nostalgia” often seems more properly described as a feeling of dislocation that comes from having one’s familiar world ripped apart. Many of us like “building a life,” and when the life we’ve built is suddenly taken from us without our having any say in it, we feel helpless and adrift. I don’t hate progress, I hate the psychological distress that comes from having my  relationships and favorite places wrenched from me.

As I say, I’m under no illusion that video stores could be preserved. But what I do wonder is whether a better type of progress is possible. The closure of Video Renaissance made me ask myself: If we can’t keep video stores, but I don’t like a future in which everyone just sits at home and gives their money to Amazon Prime, what would movie-watching look like in my future utopia?

I guess it would be something like this: Yes, every film ever made would be instantly available at everybody’s fingertips for free through a publicly-run Spotify equivalent. But there also need to be places to meet people who know about and like movies, places like Video Renaissance. Perhaps we could have public places filled with screening rooms, which anybody could book to put on a screening of any film ever made. If you want to watch The Maltese Falcon tonight, you could do it in bed. But if you want to watch The Maltese Falcon tonight with some other people who like Humphrey Bogart, then just go on the screening-house website, click on an empty screening room, and indicate that The Maltese Falcon will be playing there at 8pm. If you intend to bring some pizzas, check the box marked “I am bringing some pizzas.” See who shows up. Make new friends.

It’s funny, though: As I was thinking about my “ideal place,” I kept coming up with things like “Well, you’d want it to have access to everything,” and “Well, you’d want anybody to be able to come there and use it for free.” And after a while of thinking, I realized that I was talking about something that strongly resembled a public library. A place where anyone can just come, access culture, meet, with no requirement to purchase anything. That’s what libraries are.

In fact, I’ve written before that public libraries are more radical and socialistic than people assume: If we provided other things people need in the way we provide books at libraries (e.g., if there was a government restaurant), it would seem quite a departure from the ordinary way of doing things. But libraries seem so natural that we don’t appreciate how remarkable they are.

When I remembered the existence of public libraries, I hit upon an idea: We should get the film archive from Video Renaissance into the Sarasota Public Library. The store owner, who needed to cash in the stock to fund his retirement, was selling the films one by one to private individuals, who would probably watch them a few times and then let them gather dust. But if we made that vast selection available at the library, everyone would be able to watch them for free. It would get us a step closer to the “free movie place for everyone” utopia.

Now I’m working on a crowdfunding campaign to do just that. The response has been remarkable: thousands of dollars from the community in just a couple of days. Why? Because the idea just makes sense. Have a place where people can come and get all the movies and it’s not contingent on their ability to pay and they don’t have to give Jeff Bezos anything. It’s just an appealing notion: I could go to the library at any time and get something as lovely as The Railway Children or as trashy as The Abominable Dr. Phibes. It would just be there. That still doesn’t get us quite to my utopia, of course, where the public film library actually has lots of comfy screening rooms. But it’s a step closer.

We need great places to make great memories. Your online life just isn’t as rich in some ways. But places like Video Renaissance are memory factories: They’re the places where the delightful encounters happen that we’ll remember. Having a town’s memory factories shut down robs it of something crucial. And it’s important that we think about what comes next: what the ideal world looks like, and how we can fill the hole left by the destruction of beloved institutions.

You can donate to the campaign to give the Video Renaissance film archive to the public library here. And as always, please consider subscribing to Current Affairs. We are entirely reader-funded and cannot operate without your support.