The Worst Type Of Person You Can Be 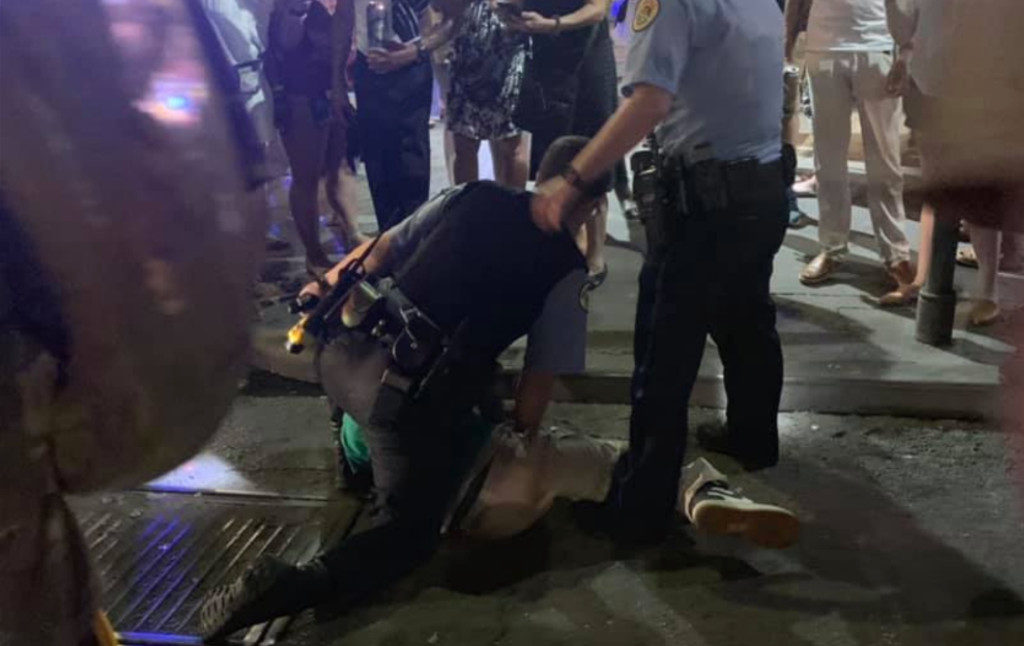 Here are the facts, according to the available news reports: One night last month, around 9:00 pm, the owner of Frenchmen Street Art & Books called the police to report a noise complaint. A brass band was playing in front of the bookstore, and the owner wanted it to pipe down and go away. The police were duly dispatched. The band’s trumpeter, Eugene Grant, is known to have special needs, and when police confronted him, an altercation ensued. Grant ended up pinned to the ground and arrested, with an officer alleging that Grant struck him with a trumpet. As Ethan Ellestad of the Lens put it, Grant is known locally as “a good natured, friendly young man who ultimately just wants to make music and entertain others” and “to see the now viral footage of Eugene held on the ground by two NOPD officers with tasers in their hands was shocking.”

Now, if you know anything about New Orleans, you know that Frenchmen Street is a music street, with about a dozen different live shows on any given night within a three-block stretch. Frenchmen Art & Books is located right at the heart of it, on the corner where brass bands have played for years. Frenchmen at night is a noisy street—when looking for apartments in the city, I checked to make sure they were a certain distance away from it. The street, however, has been noticeably gentrifying in recent years.

Frenchmen Street Art & Books used to be called Faubourg Marigny Art & Books, and it was the oldest LGBTQ bookstore in the city. It’s now under new management, and is no longer a funky little queer bookstore but slick and minimalist with a meager selection of pretentious design books. “There goes the neighborhood,” I thought when I saw the inside. But more important than the new owners’ aesthetic is their crime against a street musician: They called the cops on a disabled guy for playing the trumpet outside their store in the middle of the music district.

I cannot overstate what a despicable thing to do this is. First, Eugene Grant is black, and the owner is white, and to call the cops on a mentally challenged black man is to threaten him with outright murder. Cops frequently do not show special consideration for individuals with disabilities—one false move, one disobeyed instruction, and you can find yourself dead. The police should only ever be called to stop serious violence, and even then they can make the situation worse.

What makes this even uglier is that Frenchmen Art & Books depends on the street musicians for its existence as a business. Street musicians in New Orleans are not paid well. They live entirely on tips. And yet the music is one of the main attractions drawing people to this city. If you run a bookstore on a street that’s crowded with people because there is music, the musicians are bringing you your customers. A business owner dependent on brass bands who calls the police on a brass band is failing to notice who butters their bread.

Musicians have long had a bad relationship with the police in New Orleans, and their labor is taken for granted. But I also want to zero in on what this incident tells us about gentrification and racism. A yuppie business owner has less tolerance for the joyful noises of brass bands playing late into the night on the corner. They want music, yes, but in its place, and not spilling out everywhere at all hours. The new owner had a sense of entitlement: My right as a property-owner to peace and quiet should trump your right as a musician to make your living in the place where musicians have long made their living. There is a brutal selfishness underlying this one phone call to police, but it’s a selfishness shared by many who move into a neighborhood and then demand that it conform to their preferences rather than them adapting to its. According to Small Business Owner Mindset, property rights are so fundamental that you are justified in bringing squads of armed men, who will not hesitate to use violence (as they in fact did here), to stop a minor nuisance (a nuisance, we might reiterate, that happens to be bringing you business).

We have seen plenty of examples of white people calling the police on black people over absolutely nothing—BBQing while black, waiting for a friend while black, sleeping while black. These phone calls are the product of a radical sense of superiority and entitlement, and I don’t think the people calling the cops even notice how extreme their behavior is. They haven’t thought for a moment about what it’s like to be an autistic trumpet player trying to scrape together a few bucks on Frenchmen Street.

I was heartened by the public outcry against the bookstore owner. Unfortunately, we only tend to hear about the extreme incidents; minor ones go on all the time. I wrote recently about the Boston police destroying homeless people’s wheelchairs. That was part of an effort to “clean up” the neighborhood, i.e., make it safe and comfortable for rich people. We heard about the wheelchairs because it was such an obviously monstrous thing to do, but we don’t hear when a cop throws out a homeless person’s backpack or demolishes their tent. There are continuous low-level clashes between poor people and entitled wealthy people who use the police as personal security guards to ensure they never experience discomfort.

I suppose there are worse people out there than those who would punish musicians with state violence. I guess torturers are worse. Jeffrey Epstein was worse. But I do think we need to be clear about just how objectionable it is to call the police on nonviolent people going about their day instead of resolving disputes through the usual means of negotiation and compromise. Unfortunately, class divisions make these kinds of confrontations inevitable, and I don’t know if there’s any way to appeal to the consciences of those who believe the perfect preservation of their property rights is more important than other people’s lives.