The Descent Into Cruelty 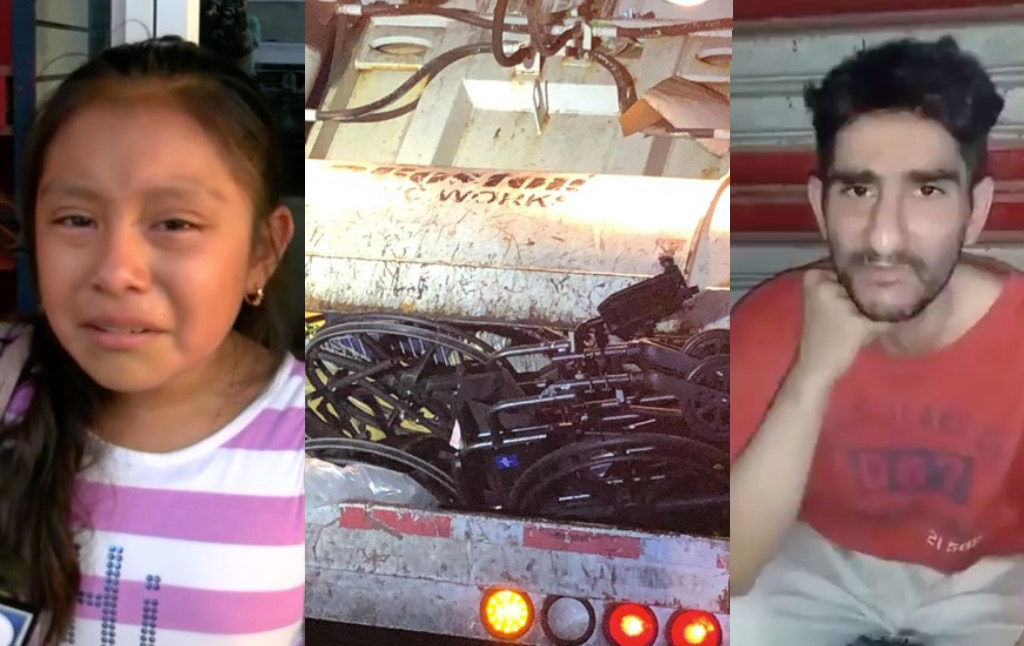 The authoritarian mentality is capable of justifying hideous things…

“You could hear the metal crushing noise. It was really loud. They just tossed it in and crushed it,” says Cassie Hurd, a Boston homeless advocate who at the time had been observing the area. Hurd says about 15 BPD and state police cruisers, along with a DPW trash truck, rolled up to Mass. Ave. after dark and began telling the people congregating there to leave. Any unattended items were confiscated, she says, including at least three wheelchairs. “We spent a significant amount of time with someone who lost his wheelchair. He is not able to be mobile without it, and not having a home, nowhere to sit, nowhere to go, and was having pain. He couldn’t really balance or walk,” Hurd says. “He had left his wheelchair for a minute and his partner tried everything to keep the wheelchair. She pleaded with police and was sobbing and crying. They took it and threw it in the back of the truck and it was devastating to watch. There was nothing anyone could do to prevent them from throwing it out.” The man, who she identified as Jarrod, told her he had been injured in a hit-and-run car crash about a week earlier and had been prescribed the wheelchair by a doctor. His backpack had also been taken and trashed in the sweep, she says he told her.

Being a cop can turn you callous, we know that. But really, if you destroy a homeless person’s wheelchair as they beg you to stop, you’ve lost the very last shred of your humanity. There’s nothing left.

Next story: The government deported a schizophrenic man from Detroit, sending him to live on the streets of Baghdad. Jimmy Aldaoud had never lived in Iraq, and didn’t speak Arabic. In a desperate video he posted online from Iraq, Jimmy said:

“They wouldn’t listen to me… They wouldn’t let me call my family. Nothing. They just said: You’re going to Iraq and your best bet is to cooperate with us. That way we’re not going to chain you up; we’ll put you on a commercial flight. I begged them. I said, ‘Please, I’ve never seen that country. I’ve never been there.’ However, they forced me. I’m here now… I don’t understand the language. I’ve been sleeping in the street… I’m diabetic. I can’t get insulin shots. I’ve been throwing up, sleeping in the streets, trying to find something to eat. I’ve got nothing over here.”

Aldaoud died in Baghdad, alone and miserable, apparently from lack of access to insulin. “He was literally crying every day,” said his sister.

Third and finally, ICE conducted a series of immigration raids at Mississippi food-processing plants and arrested about 680 people, the largest single-state immigration raid in U.S. history. Children came home from school to find their parents gone. An ICE official replied to criticism of this: “We are a law enforcement agency, not a social services agency.” Here is 11-year-old Magdalena Gomez Gregorio tearfully begging for her father’s release:

“Government please show some heart, let my parent be free with everybody else please… My dad didn’t do nothing. He’s not a criminal.”

I don’t know how anyone can do these things and live with themselves. But “rules are rules” arguments are very powerful. “I don’t make the law, I just enforce it.” Of course, everyone has a duty not to participate in the enforcement of certain laws. If they didn’t, then the “just following orders” defense to genocide would be valid, and there would be nothing wrong with participating in the building of a totalitarian nightmare-state. I think one big problem with cops and soldiers is that they launder their morality and fail to exercise the basic responsibility of asking whether what they are doing is humane.

But even that lets them off the hook too much. Take the wheelchairs. There is no law saying that cops have to destroy a homeless person’s wheelchair. That’s a matter of pure discretion. Even if you’re told to conduct “Operation Clean Sweep,” nobody is going to object to you allowing the disabled to roll away rather than, as depicted in a tragic photo from the scene, stagger away painfully. What could possibly cause police to act this way?

I don’t know, there’s just a kind of “authoritarian mentality” that many of them seem to develop, where they think “the law” means “barking orders at people and then punishing them mercilessly if they don’t comply to the letter.” Look at that poor guy who got murdered at the La Quinta in Arizona. The officer kept shouting instructions at him and confusing him, and then when he made an unexpected movement the officer filled him with bullets. The cop was acquitted at court, then given early retirement and a pension.

Is it accurate to say America is becoming crueler? Most of American history has been pretty cruel. Immigrants, people of color, the disabled, the homeless—they have never been well-treated here. I can’t tell whether the place is getting worse, or I’m just noticing things that have been happening continuously from the beginning. There are differences—as I say, the immigration raid is bigger than any we’ve seen. Certainly, Donald Trump has a gratuitously cruel personality, from encouraging rally attendees to beat up protesters to telling cops they should stop protecting suspects’ heads from whacking into the doorframe as they are shoved into the back of police cars. If the president, to any degree, sets the “moral tone” for the country, and changes the bounds of what is socially permissible, then I wouldn’t be surprised if America was getting nastier on average.

I hesitate to say that “we” are becoming crueler, though. Despite scenes of wheelchairs being smashed by garbage trucks and little girls crying about their dads being taken away, there is tremendous resistance and resilience. In some quarters I feel a kind of warmth and solidarity I’ve never seen before in my life. Public opinion has actually turned more pro-immigrant over time, not less, and Donald Trump does not represent the conscience of the country.

Still, it doesn’t take a majority to create a nightmare. I worry that this is just the beginning. Already around me I see some supposed “leftists” defending strict immigration enforcement, which means rounding up families in the night and tearing parents away from kids. Setting aside the encouraging compassion and outrage I feel at DSA events, it’s still true that the vast majority of people look upon their government doing horrific things, shrug, and go about their day. It honestly makes me think: What would happen if they started exterminating people? If nobody had to see it, if people just disappeared in the night, and the ones taken were homeless or “illegal,” what would happen to stop it? Jimmy Aldaoud was exterminated. He’s dead now, because the government deliberately sent a diabetic schizophrenic to one of the world’s most dangerous cities. I’m not seeing people marching for Jimmy. I’m in a coffee shop right now, and people are drinking macchiatos and talking about their lives.

I have pointed out before that one reason atrocities occur without protest is not actually that we’re cruel, but that the suffering is kept behind locked gates. This is true in the case of industrial animal slaughter, and it was true in the case of industrial human slaughter as well. Outside the gates, the sun shone and people went cheerfully about their business. Inequality is dangerous because it’s so easy to live with, because the world looks great to people who live in the fortress of wealth, and they can’t see what everyone else is complaining about. Even if we’re not becoming “more” indifferent, then, even if this isn’t some mass shedding of our empathy faculty, we might still be tolerating more and more horrendous things, simply because we tolerate whatever we don’t have to look at.

What if most things are fine, but the things that aren’t fine are horrific? What if this is Omelas, a place where there is widespread prosperity except for the torture that goes on in faraway places? As I walk around downtown Atlanta or New Orleans, I feel good and things seem to be going well. But I’m not seeing the darkness: Yesterday, a woman came to my office who worked in the tourism industry in the French Quarter. She had been laid off from her job as a schoolteacher when the entire school district converted to charter schools, and had retrained as a performer of tricks for tourists. Her boss took 75 percent of all the money she brought in, worked her half to death, and recorded every moment of her workday on camera in case she slipped up. She was desperate to escape, but didn’t know where to turn, and since local journalism has collapsed, she came to Current Affairs. I couldn’t do much for her, and I realized that nobody who passed her by would know the truth. She was putting on a show, and people would take the show for reality.

Out of sight, out of mind. You think the Soviet Union had a “gulag archipelago”? What the hell do you call this: 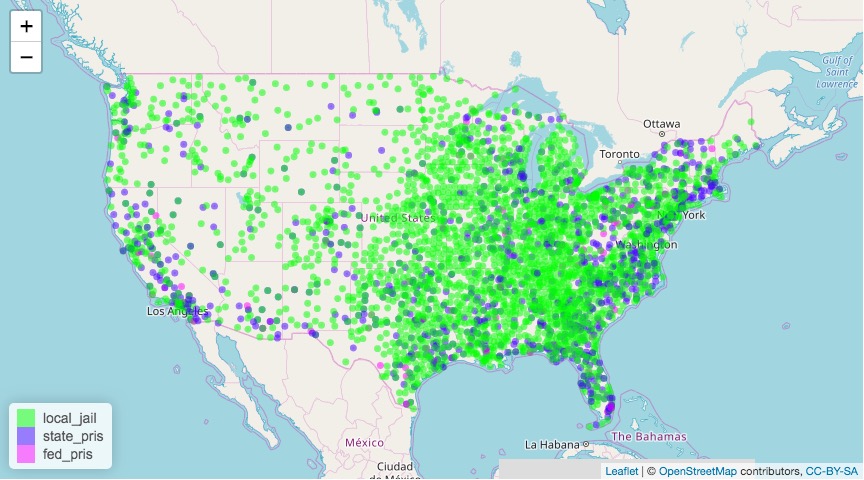 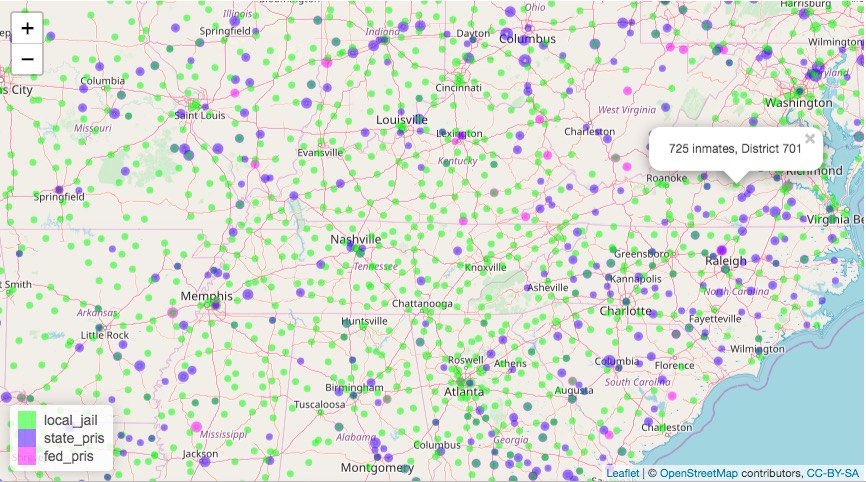 Is there a point at which everyone will feel a twinge of guilt? Or is this a frog in boiling water situation? We won’t know that we’re in a brutal eugenicist police state, one with a network of concentration camps, one that smashes disabled people’s wheelchairs, and sends its undesirables either to languish in prison or perish outside our borders. I don’t think we’re there yet. What I worry about is that it might get worse, and as it gets worse, there will be people ready to justify or ignore it.

I don’t want to think I live in a cruel country, especially because I know so many lovely people who are compassionate and generous. But I do live in a country where state cruelty goes unchecked, where the very bare minimum standards of humanity—not destroying a homeless person’s wheelchair in front of them, for instance—are not yet strictly adhered to. We have to be able to do better than this.