“Moderates” Do Not Have A Story Worth Telling 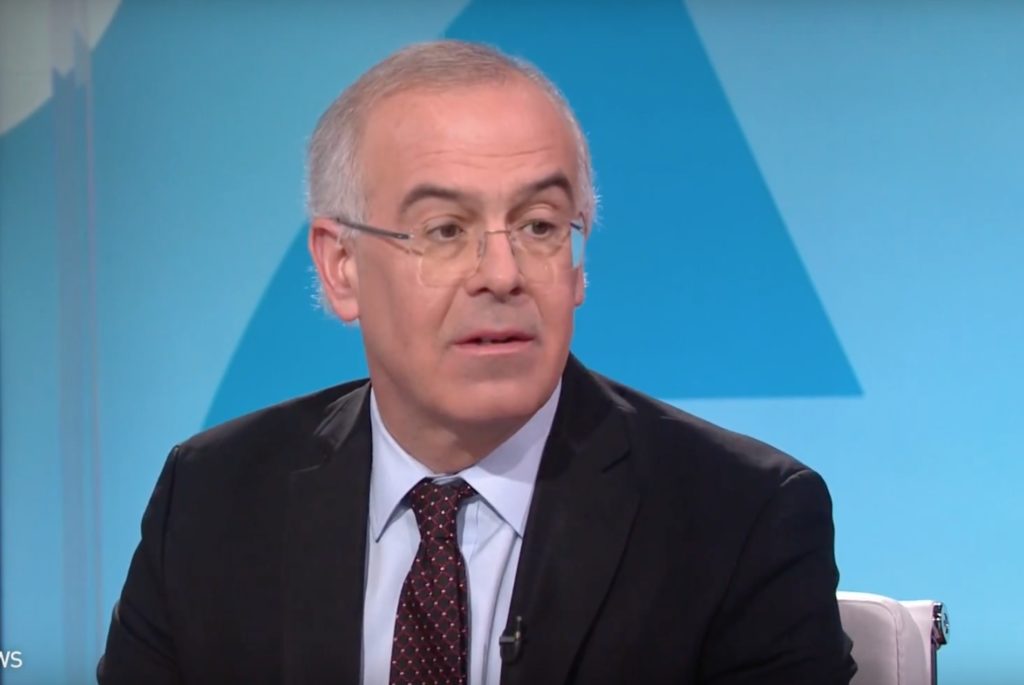 David Brooks continues to write columns, despite this magazine’s previous suggestion that he take an indefinite sabbatical for the good of the country. In his most recent offering, Brooks says that while “progressives” have a clear “story” that they are proud to tell, “moderates have a different story to tell,” a better story, but they are “afraid to tell it.” The left’s bad story begins thusly:

In this story global capitalism is a war zone. Free trade is a racket. Big business and big pharma are rapacious villains that crush the common man…. You need a government that will protect you, control you and give you things: free college, free child care. As in any war, you want government that is centralized and paternalistic.

I would first point out that this is not, in fact, the left’s story, and that Brooks has a tendency to create ludicrous caricatures of his opponents’ beliefs in order to show that his opponents believe ludicrous things. (See the column in which Brooks attempts to imagine what an activist would say, concluding that they would probably say something like: I’m emotion-driven and unreasonable and think politics is about destroying people for no good reason.) Personally I don’t want a paternalistic, controlling government, and I don’t think “free child care” is that any more than “free public libraries” are the government controlling your access to books. But let’s hear the superior Moderate’s Tale, the one that everyone except the last Democratic president, the last Democratic presidential nominee, and the current Democratic presidential frontrunner is “afraid to tell”:

In the moderate story, global capitalism is a challenge but also an opportunity field… In the moderate story, government has a bigger role than before, but it is not a fighting, combative role. It is a booster rocket role. It is to give people the skills needed to compete and flourish in this open, pluralistic world. It is to give people a secure base, so they can go off and live daring adventures. It is to mitigate the downsides of change, and so people can realize the unprecedented opportunities. Statecraft is soul craft. Through the policies they choose, governments can encourage their citizens to become one sort of person or another. Progressives want to create a government caste that is powerful and a population that is safe but dependent. Moderates, by contrast, are trying to create a citizenry that possesses the vigorous virtues — daring, empowered, always learning, always brave.

Now, I’m not sure what much of this actually means. We advocates of “paternalistic” government point to very specific problems, such as parents’ inability to afford to raise children, the giant mountains of student debt, the life expectancy gap between rich and poor, the impending climate catastrophe, more people are incarcerated than live in the entire state of New Mexico (if prisons and jails were a state, they’d be larger than 15 different U.S. states). Then we advocate solutions to those problems, whether it’s the People’s Policy Project’s “Family Fun Pack,” Abdul El-Sayed’s comprehensive state-level plans, Elizabeth Warren’s slew of proposals, or the Movement For Black Lives policy agenda. Brooks, as an alternative, gives us uplifting vacuity about “soul craft” and being “brave” and “empowered.”

What are Brooks’ criticisms of the progressive agenda? I will hand him the microphone:

[N]ever coddle. Progressives are always trying to give away free stuff. They reduce citizens to children on Christmas morning. For example, Warren and Sanders want to make public college free. But as common sense and recent research tells us, when you give people something free, they value it less. They are more likely to drop out when times get hard. Moderates want to help but not infantilize. They want to help students finish college, but they want them to at least partly earn their way, to have skin in the game. They want to produce a country that is not full of passive recipients but audacious pioneers.

Let me avoid dwelling here on the fact that the actual pioneers were ethnic cleansers. Instead, let us turn an eye toward the totally unsupported assertion that if college is more affordable, people will be too “passive” about it. (Brooks refers to “research” but does not cite it, then gives “common sense” as his second source. I am no fan of academia, but I do respect the part where if you try to pull this in a scholarly paper, you are summarily flunked.) People in the United States already drop out of college at alarming rates, in large part because it’s incredibly goddamned expensive. Personally—since we are using bullshit instead of data, I feel no qualms about going anecdotal—I paid more for law school than college, and more for college than for my free public high school. I did not thereby appreciate law school more; I am most grateful for my public high school, precisely because it was free. I have zero loyalty to or appreciation for the institutions that milked me dry and treated me like a customer rather than like someone being invested in and cared about. Are people who receive financial aid “infantilized” to the degree that their tuition is reduced? By Brooksian reasoning, we should adopt the same financing system for elementary schools as we do for colleges: stick the kids with some debt, so they’ll value their education! While we’re at it, get rid of the library so people will value books more. (I recommend everyone read my colleague Sparky Abraham’s brilliant essay on why free college is a good thing that everyone deserves.)

Brooks next makes a series of remarks about the Nordic countries. As Matt Bruenig has noted repeatedly, there are two approaches conservatives take when talking about Nordic countries. Sometimes they say that Sweden, Finland, Norway, Iceland are socialist, but that they are overrated and Actually Bad. Sometimes, they say that these countries are capitalist, and that their superior outcomes on a number of economic and social measures are because they are capitalist. (Some of the dimmer conservative commentators simply alternate between the two perspectives to fit whatever argument is convenient at any given moment. We have parodied this tendency.) Brooks is of the “The Nordics Are Actually Capitalist And Therefore Good” school. He writes:

No Nordic country has a minimum wage law. According to a JPMorgan Chase report, Nordic countries are more open to free trade than the U.S. They have fewer regulations on business creation, fewer licensing regulations. As Charles Lane pointed out recently in The Washington Post, most Nordic countries have zero estatetax. Nordic health plans require patient co-payments and high deductibles, in stark contrast to Bernie Sanders’s plan.

This is a paragraph so disingenuous that you should never trust another word David Brooks writes. How can Brooks note that these countries do not have minimum wage laws without noting the following extremely important bit of context, as reported by Forbes:

The Scandinavian countries of Sweden, Norway, Finland and Denmark don’t have a minimum wage at all because they are so highly unionized. “The unions there felt that a national minimum wage would interfere with collective bargaining, and it might even bring the price of labor down,” says Chater. Nordic countries prefer to have a collective agreement between unions and employers as the reference point for wages…

Nordic countries have the highest union density in the world. More than half of workers are unionized in all countries, and on the high end Iceland has 90 percent of workers unionized. By contrast, only 6.5 percent of private-sector workers in the U.S. belong to unions. We can’t talk about what the absence of a minimum wage means in Nordic countries without talking about the presence of strong unions. If most people are unionized, then you might not need a minimum wage, because any employer who tried to pay starvation wages would  face a revolt. I am sure David Brooks knows that. But he doesn’t tell his audience, because “so heavily unionized that they don’t even need a minimum wage law to keep wages from dropping too low” does not fit the Moderate Story.

There’s plenty of other nonsense here. Brooks singles out the lack of an estate tax, but why? It’s well-documented that tax rates in these countries are extremely high. Is he disputing that? Or just pointing out that they use particular kinds of taxes to achieve their much more redistributive systems? If the latter, what has he proved about whether it’s a good idea to move closer to this kind of greater redistribution? The stuff about “less regulation on business creation” is silly, as Matt Bruenig has pointed out, and to the extent that it’s true, it’s because government is more streamlined and efficient, not less regulatory. And as for Nordic health plans, it’s true they have small co-pays, but let’s have a look at a chart from the very JP Morgan report that Brooks links to:

More government insurance, better healthcare. Now, look, I don’t actually argue that Nordic countries are egalitarian paradises. But I would say that David Brooks’ “story” is exactly that, a story. It is not dealing seriously with the progressive case. (Once again, aspiring writers should take heart: You do not have to be very good at writing in order to land a job as a columnist at the nation’s leading newspaper.)

There’s more, but I am sure you grow weary. Brooks says that unlike progressives, who think “free trade is a racket,” he believes in “bringing on the world” and encouraging international competition. But as Benjamin Studebaker has noted in this magazine, the reason lefties are skeptical of Free Trade is not that we’re opposed to free trade itself, but that free trade without international labor standards agreements means a “race to the bottom” in which companies simply move production to the country that allows them the most freedom to exploit and abuse people. As Ben says, we should support “trade deals that put workers first by creating strong international minimum standards on wages, taxes, and regulations.”

Brooks raises one good point: Elizabeth Warren’s child care plan does not include a provision for stay-at-home parents, which it should. But a minor critique of a single candidate’s plan does not successfully invalidate the core left explanation of what is going on in the world and how to successfully address it. What does he think of her affordable housing plan? Her public lands plan? Her new penalties for corporate fraud? Probably more fluff about Virtue and Dignity and Bravery and Responsibility. I am sure his critique of the Green New Deal involves saying the word “dirigisme” some more.

In another recent column, Brooks pleaded with Democrats not to “drive him away” by moving to the left. There is a tradition of conservative “concern trolling” about the left—right-wingers writing articles like “the left is jeopardizing its chances of electoral success by pushing its agenda,” as if they are just trying to be helpful by suggesting progressives abandon everything they believe and become conservatives. These people must not be listened to. It’s not a coincidence that Barack Obama’s favorite pundit was David Brooks and his presidency was a colossal failure. Platitudes make bad policies. If Brooks is being driven away at last, it’s a sign we’re finally heading in the right direction.

Where The Left Goes Next How Can You Talk Effectively to Anti-Vaxxers, Flat Earthers, and Climate Deniers? Is Christopher Hitchens Still Worth Reading? The Allure of Shipwrecks Adventures in 19th Century Socialism