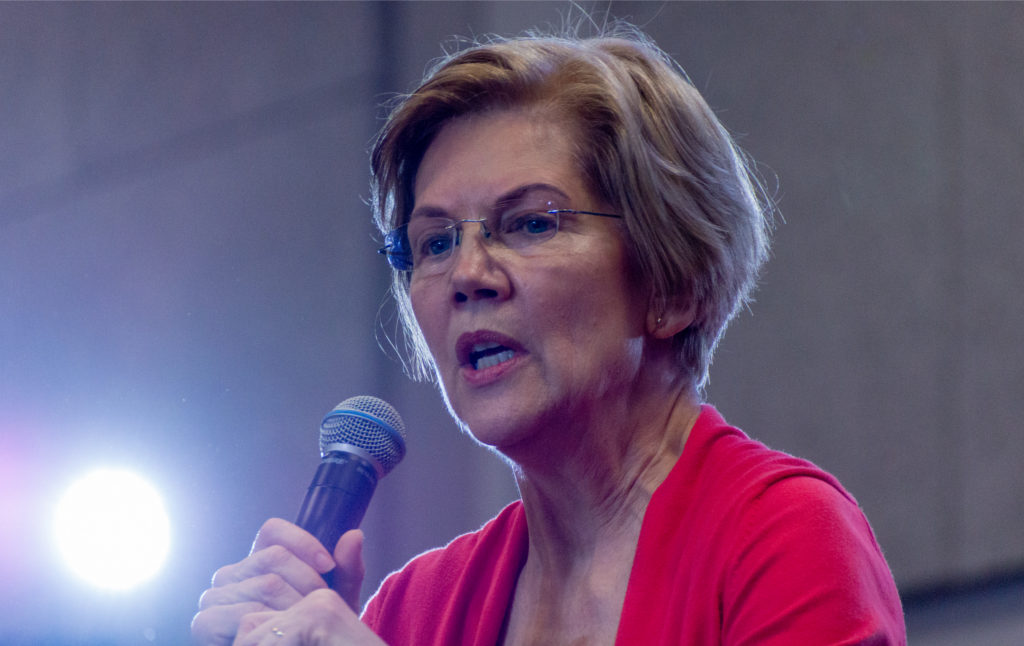 Warren is getting more specific than any other candidate, proposing some real solutions instead of empty rhetoric…

Elizabeth Warren’s presidential campaign is not picking up much momentum, but she is consistently producing the most worthwhile and interesting policy proposals of any candidate. Seemingly every week, Warren comes out with a new Big Idea, and they’re all provocative and worth debating. In a country that had intelligent and substantive political media, Warren would be leading the conversation. Sadly, we live in the United States, so our media are discussing Pete Buttigieg’s socks.

Here’s the New Yorker on a Warren speech:

“Let’s start with our values here. And that is: in the richest country in the history of the world, people should not be sleeping on the streets because they don’t have money.” Warren paused for applause before adding, “And I’ve got a plan.”

It’s that last bit that sets her apart. Warren has plans! The list of Excellent Ideas coming out of the Warren camp just grows and grow—on April 11 she released her corporate profits tax plan and on April 15 she released her Public Lands plan. Here’s what she’s come out with so far:

Accountable Capitalism Act – Warren has proposed radically restructuring America’s largest corporations, guaranteeing workers 40 percent of seats on corporate boards of directors and requiring them to serve goals beyond profit maximization. This proposal will probably make leftists grumble, because it is fundamentally reformist, but it’s such a radical challenge to existing corporate structure that the National Review‘s Kevin Williamson instantly started screaming that it amounted to full “nationalization” of American industry. (If only!) What’s great about Warren’s proposal is that she raises fundamental questions of workplace democracy: Why don’t workers get to decide what happens at their companies? This is a fundamental point the left makes, and her act can start us thinking about what it would really mean to have “democracy at work.”

Real Corporate Profits Tax — The failure of America’s largest corporations to pay taxes on their profits is a scandal. Warren has proposed straightforwardly to tax profits about $100 million a year at 7 percent for the largest firms in the country. I think this is low, and gives a generous exemption, but it’s nice to see Warren so clear on the issue: Companies aren’t paying tax on what they make, that needs to end, she wants to end it.

Universal Child Care — The costliness of raising children is one of the main reasons families are in poverty. Warren wants to introduce a federal program that would guarantee free child care for anyone under 200 percent of the poverty line. There are problems with Warren’s childcare plan. It’s means-tested. It doesn’t provide support for at-home carers and ought to simply be free. But it’s a good place to start!

Family Farm Plan — Warren has proposed a plan to protect family farmers against domination by large agribusiness companies. At the moment, small farmers must enter one-sided lease agreements for farm equipment. Warren wants to ban that. She’s also going to crack down on giant mergers of agribusiness companies that make it even more difficult for small farmers to compete. (She also wants to restrict foreign ownership of American farms, a plan I’m not sure I’m on board with.)

Public Lands Plan — Warren’s proposal is straightforward: an immediate halt to drilling on public lands. She also wants to “set a goal of providing 10% of our overall electricity generation from renewable sources offshore or on public lands,” fully fund our public land management agencies and eliminate the infrastructure and maintenance backlog on our public lands in my first term,” and use “the Antiquities Act to restore protections to both monuments and any other national monuments targeted by this Administration.” It also calls for “‘a 21st century Civilian Conservation Corps’ staffed by 10,000 young people and seeks to reduce inaccessible public acreage by 50 percent.” Not many candidates talk about how to use land well. Warren’s plan could be fleshed out more, but it’s great to see that she’s actually thinking about how the U.S. government can acts a proper steward to the country’s public lands.

Housing Plan — Warren’s housing plan would provide federal funding to build 3.2 million new affordable housing units, investing “$2 billion to support borrowers with negative equity on their mortgages, predominantly in suburban and rural communities,” “down payment assistance to communities historically denied mortgages by the government,” plus putting “$10 billion into a new competitive grant program that communities can use to build infrastructure, parks, roads, or schools.”

Anti-Corruption Legislation — Warren has proposed a series of measures for reducing the influence of lobbyists, providing greater transparency on who is lobbying for what, and starting to get rid of the “revolving door” between the public and private sector.

Too Big To Jail Act – Warren wants to introduce new criminal penalties for fraud and wrongdoing by financial executives.

Breaking Up Big Tech – Warren wants to split up the tech companies so Amazon’s marketplace and its products divisions are separate, Google doesn’t do nine zillion different things, and we are less ruled over by monopolistic behemoths.

Eliminating the Electoral College — Warren hasn’t been too detailed on this, but she’s made the goal clear: a real democracy, where every vote counts equally. It’s strange that eliminating the electoral college is considered so radical when it should be so obvious.

Warren’s policy plans are more detailed than anything the other candidates are putting out (except, perhaps, Mike Gravel). Yet they’re still not nearly as in-depth as one might hope for. When Abdul El-Sayed ran for governor of Michigan, he and campaign policy whiz Rhiana Gunn-Wright put out lengthy, well-sourced policy documents from a full state-level single-payer plan to a 45-page urban agenda. Nothing Warren has produced comes anywhere close to this, and her plans seem to mostly exist as brief Medium posts. (You can’t even find them on her website, which is nuts, and the Medium posts are paywalled. If you’re the policy candidate, don’t have your policies behind a paywall!) The fact that she is far ahead of the others in providing detailed plans shows in part just how low the bar is.

Still, I commend Warren for focusing on the questions that matter: What are you actually going to do in office? Why will it be useful? You don’t have to think Warren’s plans are flawless. (As a bit of a prison abolitionist, I’m skeptical about increased criminal penalties for anything, even white-collar crime.) But she’s got real ideas, and that’s more than can be said for some of the others. It’s not clear how much there is to gain from doing this. The more detail you provide, the more you wed yourself to promises that might be impossible to keep, and Pete Buttigieg might be right in his instinct that voters care more about narrative than ideas.

I’m not much of a policy nerd myself, and I have previously been worried that Elizabeth Warren might have a bit of a “professorial” approach to politics that understands how you fix problems once you have power but is less clear on how you actually build power in the first place. I am not sure how effective Elizabeth Warren would be as a nominee, even though I’m increasingly convinced she’d be an ideal chief executive (at least on domestic policy). I really do admire her, though: She’s got bold plans and she’s speaking my kind of language (“Do not cross the picket line!” she told Stop and Shop customers a few days ago. Be still my heart!) Her decades-long evolution from market conservative to consumer champion seems sincere, and she now has a very clear sense of whose side she’s on. Things were encouraging from the moment she picked Lawrence, MA—site of the famous “Bread and Roses” strike—to give her campaign kick-off speech.

Some my friends on the left are frustrated by Warren’s candidacy, because it splits the left wing of the Democratic party while not standing a chance of overtaking Bernie Sanders. Ben Studebaker, for instance, thinks Warren is damaging Bernie and that the policy proposals are desperate, impossible promises. Fortunately, Bernie is currently crushing every other declared candidate, massively out-raising them all, and kicking ass all over the place. If the race were tighter, I’d be more worried, but with Democratic operatives terrified that Bernie is steamrolling his way to the nomination, I welcome the presence of Elizabeth Warren in the race. Warren has suggested she’d be happy just putting good ideas into the discourse, even if she doesn’t necessarily win, and right now she’s doing exactly that. I wish there were more like her.