On Law Professors As Presidents 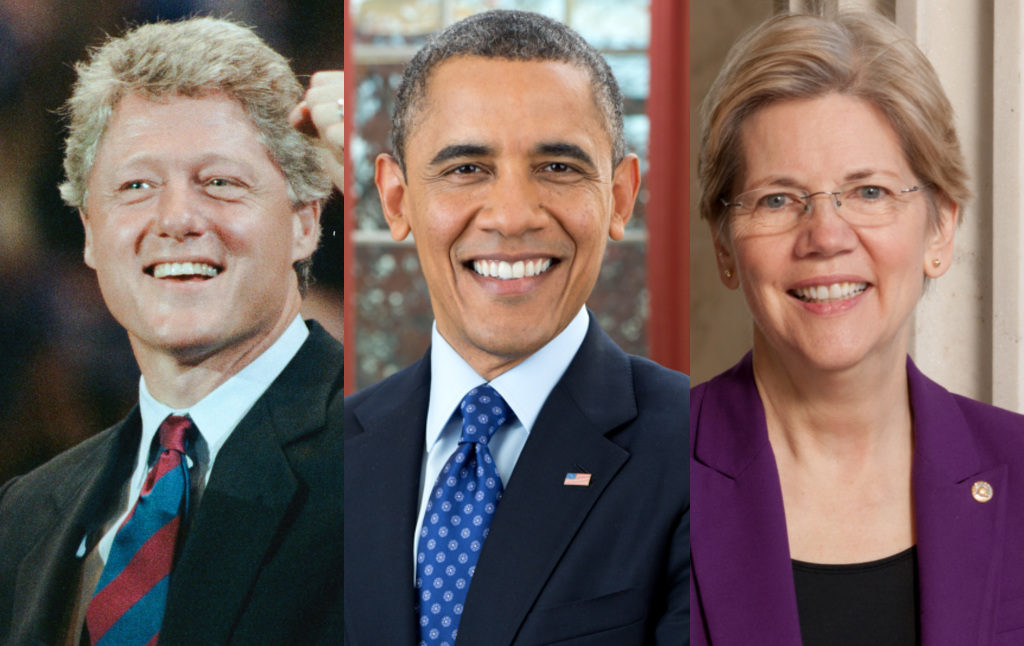 The law school mindset produces policy-makers but not organizers…

If Elizabeth Warren is elected in 2020, when she is sworn in every Democratic president for the past 40 years will have been a former law professor. Not only that, but they will all have been associated in one way or another with Harvard Law School or Yale Law School. Granted, Bill Clinton didn’t teach law for very long—he ran for office as soon as he possibly could. But I think it’s worth asking the question: Is this healthy for both progressive politics and democracy generally?

There is something that troubles me about having law professors in office, perhaps because I have been to law school. I think there is a “prevailing ideology” in law schools, one that inhibits fundamental political change. In law school, students are famously taught to “think like lawyers.” It’s a major shift in one’s mindset. Thinking like a lawyer involves looking at every side of an argument, taking it apart piece by piece and examining it, ruthlessly interrogating every assertion to see if it holds up. It can make you extremely pedantic—my own writing was affected (or infected) by my legal training, and you can tell. In many ways, it’s useful training. It can give you a nose for bullshit, and makes you a clearer thinker. It’s important to question your own beliefs to see if they hold up.

The other side of this, however, is that it can erode your convictions and make you “miss the forest for the trees.” Students go into law school “idealists” and come out “pragmatists.” The charitable way to describe the change is that it makes you less dogmatic and more thoughtful. Another way to put it, though, is that it makes you less committed and too uncertain. Law students are trained to see questions as “puzzles” in search of solutions. I think you see this in Barack Obama, the quintessential law professor. It’s no wonder Obama became the president of the Harvard Law Review: He had exactly the traits that help you succeed in law school. He liked to mull over an issue, to puzzle about how to find the optimal policy.

I think there’s a good chance you don’t see anything objectionable about this. In fact, you may think it’s nothing but a positive trait, that it makes the case for a Warren presidency. The job of a president is to implement laws, why wouldn’t we want someone who is an expert in laws? But I find the mindset troubling, for a very simple reason: It sees policy in isolation from politics. What I mean by that is that while law professors are very good at thinking about how to balance competing interests to craft policies, they’re absolutely horrible at thinking about how you build the political power necessary to pass policies in the first place. In fact, this doesn’t come up at all in law school.

People might think of lawyers as pugilists. But most of what they do is negotiate settlements. Most of the lawyers I know hardly ever set foot in a courtroom. And that’s the lawyers! The law professors are even more detached. A lot of people who remain committed idealists after law school leave the legal profession, or never enter it at all. (Like me!) This is because law school is an incredibly frustrating experience: It’s three years of learning about all the existing limitations on the possibilities for social change, without ever studying the history of those who have scoffed at the limits and created new possibilities.

In the Ivy League, there is almost no awareness of the existence or history of the labor movement, for example. In my three years of law school at Yale, I don’t think a single labor law class was even offered. I recently wrote about a U.S. history book by acclaimed Harvard historian Jill Lepore, which is completely bizarre in that it essentially erases unions from American history. I don’t think Lepore would have been able to write such a book if she didn’t exist in a milieu where these things simply aren’t taught or talked about. When Harvard dining hall workers went on strike to demand a living wage, only about 150 of Harvard’s 2400 instructors signed a petition supporting the workers. (Though Elizabeth Warren did not sign the letter, she joined the striking workers in protest, which is actually better.)

One of the most serious problems in contemporary liberalism is its failure to understand how power is built. It is, as my colleague Luke Savage has put it, a “West Wing” mentality in which one simply needs to get the Good Smart People into office, who will then make better policies. I have a certain worry that even a good law professor, e.g., Warren, would have the same kind of mentality: better, leftier policies, but without actually traveling the country helping leftists at the state and local level build power. The president needs to not just be a policy-maker, but an organizer, and one of the most serious mistakes Barack Obama made was disbanding his organizing apparatus after it got him elected. Too much of a law professor mindset would keep you from seeing why, for example, Bernie Sanders’ “STOP BEZOS” act was good politics even though it would be bad policy. On the other hand, go too much in the other direction, and you’ll win the election but then not know how to craft sensible laws. I do not share the belief held by some leftists that “wonks” are bad—it’s good to have people who know the nuts and bolts of how the government works! They just also need to be effective political leaders.

Eric Levitz of New York, for whose writing I have great respect, recently pondered the question of whether there would be a meaningful difference between Bernie Sanders and Elizabeth Warren as president. He didn’t think there would be. After all, they would both be under the same constraints, both have exactly the same powers, so wouldn’t their policies look pretty identical, even if one is a follower of Louis Brandeis and the other is a follower of Eugene Debs? Well, perhaps (I think we need to wait and see how each of them would answer the question of what they’d do in office). But while their policies might be similar, as well as their “rhetorical modes,” I suspect there will be a substantial difference between how they view what the president is supposed to do. To see how there are differences, we can ask questions like “Which candidate is more likely to continue to hold rallies after taking office?” or “Which candidate is more likely to stand on a picket line while in office?” I have a suspicion that if Warren were picking someone to head the Department of Labor, she would think about people like brilliant Harvard labor law professor Ben Sachs. Sanders, on the other hand, would be more likely to choose someone like nurses’ union leader RoseAnn DeMoro. This is just speculation, of course. But it’s worth seeing who the candidates would be likely to pick for their cabinet—the moment I first became truly disappointed with Obama was when he announced his cabinet selections.

I do not actually know how much of the “law professor mindset” Elizabeth Warren has. I have my worries—she doesn’t have much experience as an activist or political campaigner, and her fairly recent conversion to left ideas sends up red flags (she was opposed to single-payer healthcare in 2012, and she left the Republican Party because it was insufficiently committed to markets!). But her presidential announcement video was excellent, showing the right kind of “battle-ready” mentality, and her proposal to put workers on corporate boards is pissing off exactly the right people. The open question, I think, is: Do you plan to govern like a law professor or like a labor organizer?

I want to add one more point: There is something that troubles me about having a “working people’s party,” the “left” of the two major political parties, represented by graduate degree-bearing members of the professional class. I think a healthy representative democracy would be close to “sortition”—a cross-section of the American public as it actually is. So yes, there would be law professors. But there would also be assembly line workers, house painters, flight attendants, and cashiers. I certainly don’t think everyone should have to have “working-class credentials” in order to be fit for office—the attacks on Alexandria Ocasio-Cortez for growing up in a somewhat nice middle-class house are absurd. Most Americans do not have college degrees, and are not millionaires, and yet their representatives are disproportionately college-educated lawyer millionaires.

If you are a believer in “meritocracy,” you will tell me that this is because the people with degrees are the most qualified. Every time I bring up the unrepresentative nature of our government, people tell me I’m a fool, because obviously the people you want running government are people who have studied it. But here I’d ask a question: Why is it that hardly anyone approves of the job these educated wealthy people are doing? It may seem scary to have “ordinary people” in charge. My God, they won’t even know what cloture means! But personally I have an instinct that it would be fine, and probably better. I think this question can’t really be resolved through argument, though, because we simply don’t know. We’ve never had a representative body governing us.

Elizabeth Warren is better than the average law professor on this front. She’s from a working-class background and was the only tenured professor at Harvard Law to have attended law school at a public university. (Law schools are very snobby about hiring people from a few elite schools, so to be hired by Harvard with a degree from Rutgers means Warren was very, very good at her job.) I think it’s perfectly possible to be a member of the professional class and not live in an academic bubble—Warren’s entire body of scholarship about the hardships faced by working families is a testament to this! But as a broader matter, it is worth asking a serious question: Are we comfortable having people from such a narrow spectrum of backgrounds governing? Is it alright that every Supreme Court Justice attended either Harvard or Yale? If you think the meritocracy is real, and that the people who go to the “best” schools are the best people for the job, then you’re probably fine with it. But I’ve been to these schools, I’ve met the people, and there are a lot of them I wouldn’t want anywhere near political power. I happen to think that there are countless people without Brett Kavanaugh’s elite education that would make better Supreme Court justices. And I am not sure it’s a sign of a healthy political culture for the leftmost major political party to draw its leaders from the same few elite circles.

This article has been updated to include mention of Elizabeth Warren’s visit to the striking Harvard workers. Originally it simply noted that she did not sign the letter, which is true but it is important to note that she did publicly support the workers.

How To Make Money By Getting Everyone To Hate You Will Geoengineering Kill Us Or Save Us? The Noirs of Melville Notes from the Once-a-Year Meeting Where They Decide What All the Book Covers Will Look Like How To End Up Serving The Right