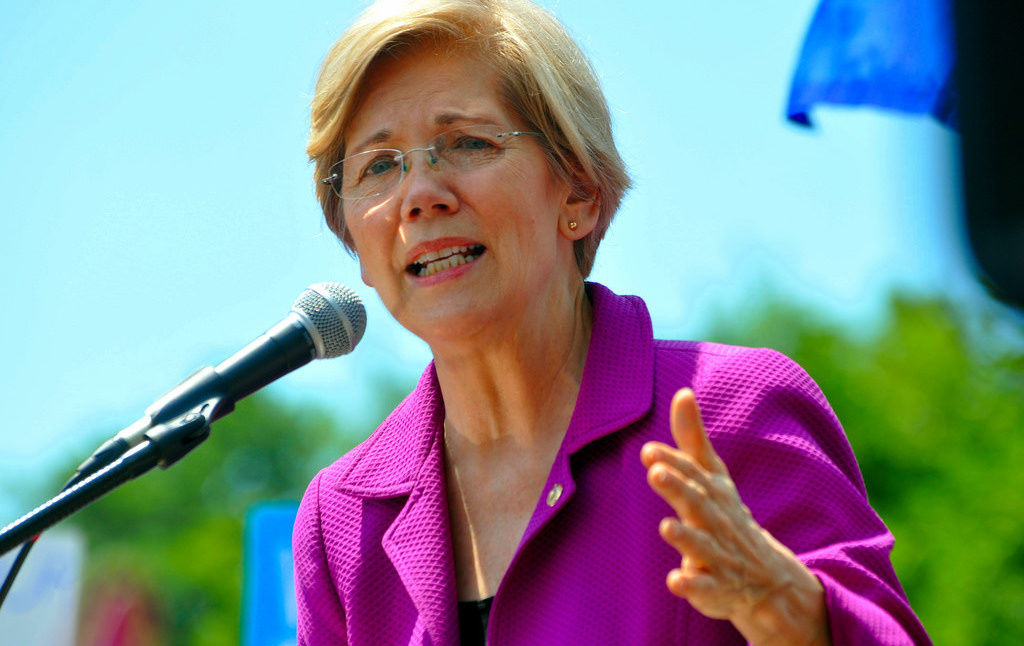 It’s socialism! It’s the death of the economy! It’s… a plan to give employees a few seats on corporate boards.

Elizabeth Warren has just introduced a modest bill that would require corporations to provide their employees with a minority of seats on their board of directors and consider the welfare of all those affected by corporate decisions, rather than shareholders alone. Warren’s plan is similar, though less radical, than the employee co-determination scheme that operates in Germany. It would leave the basic structure of American enterprise entirely untouched. But, in a sign of just how extreme U.S. “free market” thinking truly is, commentators on the right instantly denounced Warren’s as representing the total destruction of economic life as we know it.

Kevin Williamson, in the National Review, called it a “batty” plan to “nationalize every major business in the United States,” which would be “the largest seizure of private property in human history.” It is “nothing less” than “wholesale expropriation.” It is “bonkers,” “daft,” “unethical, immoral, irresponsible,” and even “unconstitutional.” (Current Affairs challenge: Find the part of the Constitution that discusses employee codetermination. Note: No creative “interpretation” allowed. It has to be in the text. We’re textualists, after all.) Warren is “a crass opportunist, intellectually bankrupt, personally vapid, a peddler of witless self-help books,” who “want[s] to seize [corporate] earnings for her own use,” and should rightly be compared to “Tayyip Erdogan, Hugo Chávez, Huey Long,” and politicians who “desire to put the assets and productivity of private businesses under political discipline for their own selfish ends.” Jeez, Kevin, tell us what you really think!

Only slightly less unhinged was Scott Shackford of Reason, who called it “Elizabeth Warren’s plan to destroy capitalism.” What about the proposal “destroys” capitalism? Well, it requires corporations to respect “a set of values above just profits,” makes them “legally answerable to people other than their shareholders,” and “overrule[s] corporate leaders’ control over their own businesses.” This, he says, makes it “socialism.” Warren “wants to use the courts to enforce her ideas of how corporations should be managed.”

Williamson, by accidental omission I’m sure, does not say what Elizabeth Warren’s proposal actually requires of corporations. What is this dictatorial “political discipline” she is putting them under? We probably ought to know before we start throwing words like “bonkers” and “Venezuala” around. Let’s review the provisions of this gigantic socialistic expropriation program:

Williamson does not make much of an actual argument about why the Warren proposal would be bad, or how having German-style codetermination will spell the ruin of the American economy. He mostly just throws invective at it, calling Warren names and invoking Hugo Chavez before recommending that corporations relocate overseas to avoid U.S. regulations. But as far as I can tell, Williamson’s theory is that by setting conditions for how corporate boards should be set up, what values they must pursue, and when their stock can be sold, the federal government would effectively “own” the companies.

To which I can only say: If this is the standard for what constitutes “nationalization,” then all American corporations have been “nationalized” since their creation.

Let’s remember what a corporation actually is: It’s a legal entity, i.e., one constituted by government laws. The government defines the parameters of what a corporation is. To “incorporate” is to form the kind of entity that the law provided for, and to accept the rights and responsibilities that are outlined in the statute. Consider the concept “a corporation has a legal duty to maximize shareholder value.” There is debate about whether this is actually true. But if it is true, it’s not because there is some metaphysical entity called The Corporation, it is because the legal construct of a corporation contains a legal requirement. The “maximize shareholder value” requirement is already the government telling a corporation what it has to pursue.

Warren’s proposal seeks to change what the government requires from corporations. You can have a debate over whether it’s good policy or not to require corporations to care about things beyond giving shareholders as much money as possible. I happen to believe that is a good policy, because when a corporation seeks nothing but profit, you get perverse results. (See, for example, the way Coca-Cola executives think about their job: “Half the world’s population has not had a Coke in the last 30 day… so the opportunity for that is huge,” said the company president. According to the New York Times, “the marketing division’s efforts boiled down to one question…  ‘How can we drive more ounces into more bodies more often?’” If the executives’ mandate was not “make as much money as possible” but “make sure humanity is kept hydrated and healthy,” their thinking would change.)  Some people might think this is a bad policy. They might think that when executives serve shareholders alone, they ruthlessly pursue growth, and the ruthless pursuit of growth is the best way to maximize human welfare. Personally, I find that psychotic, but we can differ.

Either way, though, this is a dispute about the best policy. It is not about whether the government is being a “dictatorship” or not, because no matter what you think the legal purpose of a corporation ought to be, there is a legal purpose, a.k.a. a government requirement. In fact, there are already tons of requirements that the government imposes on corporations, because the corporation is a creation of government. If Kevin Williamson thinks Elizabeth Warren’s proposal is dictatorial, just wait until he sees the Delaware incorporation statute, the law that defines how a corporation works. It tells corporations how their officers are to be selected, who has liability for what, what powers the stockholders have. It even tells them how often they have to have meetings! Dictatorship! Slavery! The road to serfdom!

It’s funny, then, that Shackford says Warren “wants to use the courts to enforce her ideas of how corporations should be managed.” What does he think the Delaware Court of Chancery is? We have all sorts of legal requirements for how corporations are to be managed; dive in to corporate law and see the degree to which everything companies do occurs within a government-defined legal structure. Look at federal securities law to see the degree to which the process of being traded on the “free market” is defined and managed by the government. If anything that the government does that impacts shareholder rights is “expropriation,” then we are in a world of expropriation. Libertarians may say “Yes, exactly,” but their quibble is not with Elizabeth Warren. It’s with the entire system of corporate chartering and corporate law.

Free market libertarians are hypocritical when it comes to the role of government. They think government should stay out of the economy, but they also think government should create and enforce (through the police!) their own ideal institutional forms. It should literally punish people for breaking promises (that’s the essence of contract law, libertarians’ favorite branch of law), and it should legally mandate that corporations try to make as much money as possible. Should someone argue for a different legal mandate, though (say, doing as much good as possible), that’s an outrageous imposition on freedom by the state. (The usual response here is that shareholders “own” companies and so are “entitled” to control it without input from the workers. But shareholders already have all kinds of “ownership” rights abrogated—e.g., they are prohibited from exercising direct managerial control. The corporate form is a legal construct, and what it means to “own” a share differs from what it means to “own” a pet duck or a piece of plywood. Ownership of shares comes with its own peculiar set of rights and duties, which are defined by the state and can vary, see, e.g., non-voting stock. The government grants shareholders the unusual privilege of “limited liability,” which is not something you get for other assets.)

You can learn a lot about what these people think “capitalism” is by their reactions to Elizabeth Warren’s proposal. Warren has said that she is “capitalist to her bones” and sees her proposal as an effort to strengthen capitalism, by making sure that the pursuit of short-term financial gain doesn’t cause the system to self-destruct. But the building blocks of capitalism (“private property, capital accumulation, wage labor, voluntary exchange, a price system, and competitive markets”) remain the same. A few tweaks to the corporate form, such as federal as well as state charters, and minority representation for employees, are designed to make sure companies seek profit without becoming pathological. This “socialistic” proposal does not transfer any ownership of company shares to workers or the public at large, and full-blown Socialists will undoubtedly feel tepid about it.

It’s interesting, then, that Williamson and Shackford think this plan “destroys capitalism.” Shackford says it’s a threat because it undermines “corporate leaders’ control.” We can see here that for these men, capitalism isn’t actually about market exchange or competition. It’s about making sure that corporations are always legally structured to pursue nothing but profit, and making sure shareholders and executives have total dominance, with zero legal recognition given to the interests of employees and those subjected to the many externalities of corporate action. If the law requires that only shareholders get to vote on the board, that’s capitalism. If the law requires that employees get to vote, that’s socialism. If the law says that corporations must do everything they can to make rich people richer, that’s capitalism. If it says that corporations also have to consider their actions’ effects on other people, or the environment, that’s socialism (and unconstitutional!).

If you want to know why so many millennials are socialists, this offers a useful clue: Because so many people on the right have come to define “capitalism” as “any set of rules that rich people like.” Shackford even puts the word “stakeholders” in quotes, as if it’s lefty lunacy to suggest that employees suffer meaningful consequences from decisions made by management, and therefore deserve to have their interests considered. This is how radical parts of the right have become: The very idea that a company should care about its workers as well as its profits, or give them a say in management decisions, is treated as a socialistic threat to the American way of life. No wonder that many people who see Warren’s proposal will say: “If that’s socialism, I guess I’m a socialist.”