When Conservatives Complain That Corporations Are “Big Brother” 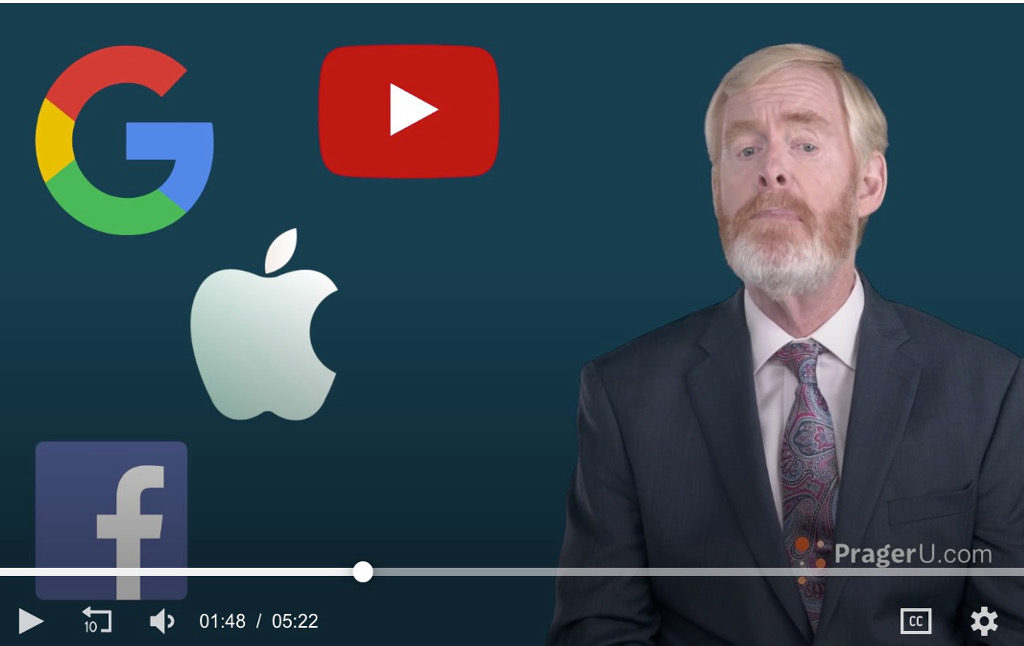 Turns out that free-market actors CAN restrict freedom after all…

In Prager University’s series of five-minute propaganda films, capitalism is generally treated as a wonderful thing. Left critiques of corporations are dismissed as naive: After all, corporations are simply producing the products the public wants to buy. So long as a company is pursuing its self-interest within a free marketplace, how can you claim it makes us unfree or restricts your rights? Regulation appears to be all but out of the question.

Yet a new video carves out a notable exception: tech companies. Corporations like Google and Apple, platforms like Facebook and YouTube, aren’t just doing bad things. They are an Orwellian Big Brother. In “Big Tech Is Big Brother,” Brent Bozell says that while these companies began by offering a “glorious and empowering” online world in which everyone was free, “that was yesterday. Today it’s 1984 all over again” and “our former liberators now want to be our masters.” They are “demanding conformity to their values,” saying it’s “their way or the highway.” Bozell cites Apple CEO Tim Cook saying that “those who seek to push hate, division, and violence” have no place on their platforms. Bozell says that if you “disagree on politics or morality” with the tech CEOS, “Big Brother will shut you up by shutting you down.” He cites the example of Meghan Murphy, who was banned from Twitter for tweeting remarks critical of transgender people and and the removal of an anti-abortion political ad on Facebook (it later apologized and restored the ad, which Bozell does not note). Bozell complains that a number of PragerU’s own videos have been placed on restricted access (I had no trouble accessing the one he cites), and argues that even more pernicious “shadow banning” may be occurring. Bozell concludes: “if you revere the First Amendment, you should be concerned. We are moving swiftly toward an Orwellian 1984 worldview of stifling, one-way-of thinking conformity.” Companies must restore the “open market of ideas” and “stop the censorship… otherwise America and the rest of what has been known as the free world will cease to be free.”

This is, of course, a bit over-the-top. Since PragerU has millions upon millions of views on YouTube, and saturates the internet with ads, and conservatives are crawling all across Twitter and Facebook, it is extreme to invoke Orwell’s nightmare vision and warn that we will soon “cease to be free.” As always, I would note that the right is pretty loud for being so silenced.

But what’s also odd about conservative critiques of tech companies is that they are critiques of corporate power. From every other PragerU video, I would get the impression that corporations cannot be “Big Brother,” because we choose whether to interact with them or not. It’s a free market, and if you don’t like the product on offer, you can go and find another product. Citing “the First Amendment” when discussing corporate speech-restrictions fails to understand the nature of “freedom of contract”—for a store to kick you out if you stage a protest inside is not a violation of your “free speech,” because the store is the private property of its owners. Say a context where an employee had been fired for handing out a pro-union pamphlet, or a customer had been asked to leave a Walmart for refusing to stop waving a Palestinian flag. I doubt many capitalists would argue that the right to free speech trumps the right of an owner to decide which speech to allow on their property.

When conservatives like Bozell criticize YouTube and Facebook as abridging freedom of speech, then, they implicitly concede that private companies can have the power of governments, that “Big Brother” can be in either the public sector or the private sector. They accept Elizabeth Anderson’s point that corporations are private governments structured as dictatorships. If the gateway to the “public square” is policed, it doesn’t matter whether it’s policed by the state police or the security firm hired by the asset management company that owns the gate. And Bozell recognizes that the capitalist reply to left complaints, “If you don’t like it, you’re free to leave,” doesn’t make sense. YouTube is the place where people see and share video content. It is the digital equivalent of a sidewalk. Whoever controls it is the government.

My instinctive reaction here is to roll my eyes and say “Oh, so you’re saying that concentrated power in the hands of unaccountable self-interested private actors can abridge people’s freedom?” Like James Damore, who suddenly became very interested in labor rights once a giant corporation fired him for a thing he said, Bozell is finally starting to grasp the left idea of power. Of course corporations can be coercive. If you make your money peddling videos on the internet, and the head of YouTube decides they don’t like what you put up, they can ruin your career! That’s power. I’ve pointed out before that if Mark Zuckerberg suddenly decided that he wanted to destroy Current Affairs’ revenue, he probably could, simply by making sure our content never displayed again on Facebook. (That’s why I will always love him and have nothing critical to say about him whatsoever.)

Actually, Bozell does not appear critical of the fact that speech is policed by benevolent billionaire overlords. He looks back fondly on the Good Old Days when we were still free, before the CEOs started imposing absurd standards like “treat transgender people with basic dignity and respect.” His prescription is to “stop the censorship.” But since power will presumably remain in the same hands, this seemingly means that conservatives should just complain until the same decision-makers reverse themselves. This has been the strategy so far, and it has worked quite well! When Twitter was failing to promote the accounts of prominent Republicans, conservatives complained and the “problem” was instantly fixed. And Facebook apologized for demoting the anti-abortion ad.

But you’ve still got a Big Brother watching over you, and your speech is still dependent on the whims of executives and the opaque interpretations of Terms of Service agreements. We should note how different this is from how free speech decisions operate in the public sector. Say what you will about American law (I’m against it), but it’s relatively transparent. You can look up First Amendment caselaw. There are rules for what you can say and what you can’t, and when people have their speech abridged there are cases brought, and those cases are argued in a public forum, and judges make decisions and write opinions. Those judges aren’t elected, but we know who they are, we know how they get appointed, and theoretically we have some input into the governing process.

That’s never going to be the case with corporate power. You might get the outcome you want by lobbying and protest, just as popular protest might lead a dictator to make concessions to the public. But democracy means that there has to be some level of deliberative participatory governance over these things, it can’t just be “whatever rich people decide.” I’ve previously cited, as a concrete example of an alternate way of doing things, the Wikipedia model, in which users deliberate about the policies and set them collectively. There is a hierarchy of decision-makers, but it is accountable.

I am not sure conservatives will find democracy a particularly compelling suggestion, in part because it might well lead to the same kinds of decisions they now object to. It could well be that, in the judicial branch of YouTube, appointed by the elected popular council of YouTubers, people still think that “don’t use homophobic slurs” is a precondition for participation in the “conversation.” There are going to be difficult moderation questions upon which people disagree: I am not sure where I stand on Alex Jones being on YouTube, for instance. Generally, I think the speech allowed on these platforms should be as broad as possible, as close to the First Amendment as practicable. Attempts to restrict harmful speech run into the problem of precisely defining the highly contested and subjective word “harmful.” Of course, all law involves difficult adjudication questions like that—tort law is one centuries-long argument over what harm is. But just as it can be more difficult to define “distress” than to define “killing,” certain types of legal questions are squishier than others. Each new restriction is a tool that can threaten dissidents if they get on the wrong side of popular opinion.

So I’m torn on Alex Jones, because he’s pushing a dangerous and harmful worldview, but I don’t really want YouTube executives and algorithms deciding what constitutes dangerous content, because they’re very bad at it. To me, these are the problems that well-designed governance structures are designed to mitigate. A deliberative, participatory process doesn’t always produce the right outcomes, but it produces better outcomes than having a small clique of unaccountable executives deciding. The concept of the benevolent dictatorship is rightly treated as a joke, because dictatorships shouldn’t exist at all.

How free should the internet be? Who should make the decisions? These are not easy questions. They need to be argued over. But what we first need to agree is that capitalists are plainly wrong: If you privatize the public sphere, all you’ve done is de-democratize it. I’m pleased to see Prager University finally admitting, after all its videos about the evils of big government and the virtues of laissez-faire capitalism, that companies can, in fact, be Big Brother. Now the only remaining question is how Big Brother will be overthrown.