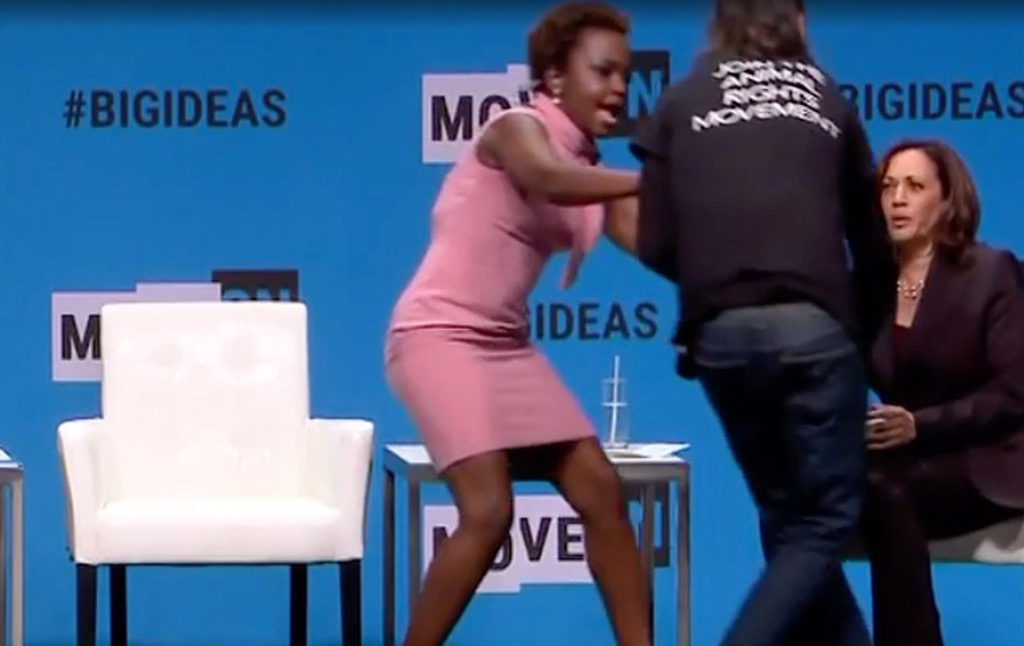 Direct action is good. But maybe consider the optics…

On Saturday, a protester went on stage at a Democratic candidates’ forum and seized the microphone from Kamala Harris. He didn’t get to say much. He announced that he was “asking for your attention to a much bigger idea than—” before the microphone was cut. But on the protester’s shirt was the message “Join The Animal Rights Movement”—he turned out to be a member of Direct Action Everywhere, trying to draw attention to factory farming and the prosecution of animal welfare activists.

It was not an effective way to spread the message. It looks horrible to have a white man—one with a man bun, no less—interrupting black women and prioritizing his issue over theirs (they were talking about the gender pay gap). It reinforced a popular stereotype of animal rights activists as somewhat fringey and shrill. I doubt anyone in the audience came away newly conscious of the evils of factory farming. While stunts and disruption can be good and useful, this one set back the cause.

That’s a shame, too, because the cause is one of the most morally important of our time. Animal rights shouldn’t be a fringe issue. Most of us prefer not to think about factory farming, or to look into the eyes of scared pigs as they arrive to be slaughtered. When we honestly examine the facts, however, it becomes very difficult not to see the mass torture and killing of sentient, intelligent animals as an atrocity. (For more, see the Current Affairs interview with Glenn Greenwald.)

In fact, the protester who disrupted the Harris event was part of something important. Direct Action Everywhere is currently hosting its Animal Liberation Conference, and the Harris disruption was not the only protest. (Their press release explaining their motives is worth reading.) Hundreds of animal liberation activists also went to a duck slaughterhouse in Sonoma County to rescue sick and dying ducks, chaining themselves alongside injured ducks and facing down riot police. They are trying to save little ducklings who are frightened and in pain, and to expose the ugly insides of institutions that people would rather not think about.

And yet: Nobody is going to talk about their protest. The 2020 candidates are not going to pay attention to animal welfare issues (not even the vegan Cory Booker!), because nonhuman animals don’t vote and their interests are considered politically negligible. Other species are a vast underclass whose welfare counts for precisely nothing unless it tugs at human heartstrings (see: Cecil the Lion, dogfighting, etc.). Direct Action Everywhere’s decision to disrupt a candidates’ forum happened because the group knows that there is no other way to get mainstream attention. And there is nothing in principle wrong with the tactic: If an issue is morally important, but presidential candidates refuse to discuss it, there is something radically democratic about simply taking the microphone and directing people’s attention to the undiscussed issue. Candidates will have plenty of venues in which to repeat their various talking points, you’re not depriving them of much.

Yet tactics also need to be chosen based on the likelihood of their actually advancing the underlying cause. This is an area where animal activism has long had some serious problems. Some of that is unavoidable—it’s a difficult issue to get people to care about, because they’re being asked to empathize with members of different species, and accusing them of complicity in a mass atrocity can be off-putting. It is easy to create the perception that by caring about nonhuman animals one does not care about human animals, a perception certainly not helped by shouting over a discussion on the gender pay gap. While I think man-bun guy did something deeply oblivious, I admire the Direct Action Everywhere members who are liberating ducks and facing down cops. Their cause is a just one.

It’s true though, that the cause of animal liberation has an image problem. A large problem for many years has been that People for the Ethical Treatment of Animals, the most visible animal welfare organization in the country, hasn’t cared about whether it makes the movement look like impractical weirdos. Past activities include: criticizing a memorial tribute to Steve Irwin because he died “harassing” a stingray, picketing the Westminster Dog Show in Klan uniforms, suggesting that milk causes autism, telling college students to drink beer instead of milk, attacking seeing eye dog programs, trying to rebrand fish as “sea kittens,” offering Hamburg, New York $15,000 to change its name to “Veggieburg,” and declaring that “catching Pokémon really isn’t much different from taking animals out of the wild and putting them in zoos.” (More at RationalWiki.) They also happen to kill a lot of animals in their shelters, and even once stole a nine-year-old-girl’s pet chihuahua from her porch and euthanized it. Jeet Heer definitely seems onto something when he says he is “half-convinced that PETA is a false flag operation to discredit animal rights, secretly funded by cattle farmers.” One could hardly imagine anything better designed to make the movement look ludicrous.

I have no idea why PETA does stuff like this. Do they think it will work? If so, they’re wrong. Or do they just not care whether they’re effective? In which case, what the hell are you for? This is a tough enough fight without the largest advocacy group doing everything in its power to alienate the public.

There have been recent legislative successes on animal rights issues. When you can get the public to pay attention, most people are sympathetic, because they don’t like watching other beings experiencing horrible pain and suffering. But in order to go from margin to mainstream, we need to think clearly about how to make animal activism seem like something for everyone rather than just for animal activists. I think the brave actions of those who try to free animals from slaughterhouses are commendable. I can defend those, and explain to people why it’s so urgent. I think storming a debate stage is a good idea. I do not think it’s a good idea to ignore “optics” entirely, however, and pursue whatever technique seems to make the biggest splash. I understand why activists can be driven to these actions—how else are you ever going to get in the press? I suppose PETA’s ridiculous stunts can be explained on the “no such thing as bad publicity” theory, although there is definitely such a thing as bad publicity. But I desperately want an animal rights movement committed to effectiveness, because their cause could not be more important.

From Beirut to Iceland: Strife, Cinema, and Getting Unstuck Why We Should All Fear Facebook’s Oversight Board Can the Suburbs Be Saved? Humanity Does Not Need Bill Gates The Royal Dystopia of Poundbury