Looking At The Bottom Line

Don’t be afraid to tell people their taxes will go up. Just explain the bottom line.

Many progressives are uncomfortable telling people that progressive policies will increase taxes. This opens them up to easy criticism, because in response to the question “How will you pay for your program?” they don’t always have clear answers. If they do mention tax increases, they will imply that these increases will solely hit the extremely rich, so that the majority of us won’t have to worry about them. To see an example of this discomfort, see Rep. Pramila Jayapal’s new Medicare for All bill. It’s excellent, and comprehensive, but Jayapal has avoided discussing how the program will be funded:

Jayapal says that this is an issue that will get dealt with in the future. “Most bills don’t have that when they’re introduced, that comes later in the process,” she said of a financing plan. “I actually think the question is not about how we pay for it, the question is where is the will to make sure every American has the health care they deserve and have a right.” Jayapal mentioned a wealth tax or repeal of Republican tax cuts as possible options for paying for the system.

I don’t have a problem with the approach of setting the policy goals before designing the funding mechanism, in the same way that it’s fine to invent a product before you figure out how you’re going to mass produce and market it. But I don’t think Jayapal should just be talking about wealth taxes or the Republican tax cuts here. These, of course, are very publicly palatable tax increases. But we need to be far more comfortable explaining to people the basic arithmetic by which tax increases on most people can actually work to their benefit. If it turns out, as it probably will, that having Medicare for All requires the majority to pay more in taxes, we need to be able to show people clearly why this isn’t a bad thing. The right has been successful at creating confusion around taxes, by convincing people that any policy that puts their taxes up will leave them with less money.

What? Isn’t that definitionally true: A policy that puts up taxes will leave people with less money? No! It isn’t true! Because taxes aren’t money that is just taken from you and then set on fire. They fund services, and if you go from paying for something on the private market to getting it for free and having it paid for with taxes, you may well end up with more money than you had originally. In fact, most people should end up with more money, if the policy is well-designed.

On single-payer healthcare, this is a point that Republicans are going to spend endless time and money trying to obscure: Yes, there is going to be a ton more federal spending and probably a ton more tax paid! But for ordinary people, that does not mean they’re going to end up with less. You have to look at savings as well as costs, and the savings are the entire amount you’re currently spending on health insurance and in out-of-pocket medical expenses. It doesn’t matter if your taxes go up, if you’re saving far more than that amount in money you would have spent on premiums and deductibles. Conservatives might tell me that I’m going to pay $150 a month more in taxes under a single-payer system. They might be right! But I’m currently paying $200 a month in health insurance premiums. This is a far better deal. It’s not completely free, but it’s better.

This should be elementary, but I don’t think Medicare For All advocates have quite got the messaging clear yet, and they’re going to need to be very up front about it given the propaganda onslaught they’ll face. Some have pointed out that while Medicare For All is very popular in polling initially, if you tell people it will raise their taxes significantly, support plummets. But telling people it will raise their taxes, without telling them what their bottom line will be, is dishonest. And so we need to find a way to present the full facts: Taxes go up, premiums disappear, you come out ahead. We don’t have to just mutter something about taxing only the super-rich (though obviously I believe in taxing the super-rich). Single-payer isn’t completely free healthcare, but it switches your current exorbitant insurance premiums to a tax that will save you money.

This kind of messaging can be done. I am still impressed by the phenomenal state-level single-payer plan put out by the Abdul El-Sayed campaign in Michigan (under the direction of superstar policy expert Rhiana Gunn-Wright). Their “MichCare” explainer document took a number of different types of people in different financial situations and showed what their spending would look like under the plan. For example, here’s the situation of a 75-year-old retiree: 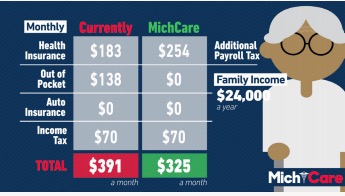 As you can see, her taxes have increased! She’s paying a new $250 a month payroll tax. Republicans are going to scare her with this: You’re making only $24,000 a year and the single-payer plan is going to make you pay thousands of dollars in additional taxes! But the question is: What’s the bottom line? And the bottom line is that our retiree will save $700 a year, because she’s no longer going to be paying insurance premiums or out of pocket expenses.

Here’s another sample situation from the MichCare plan: 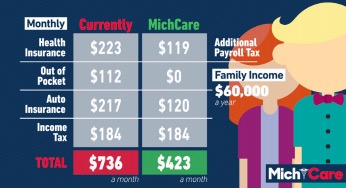 This is a family expecting their first child. As you can see, they too have a new tax. But they’re also going to save $3000 a year on healthcare.

Similarly, here are the overall spending numbers for a proposed single-payer plan for New York state: 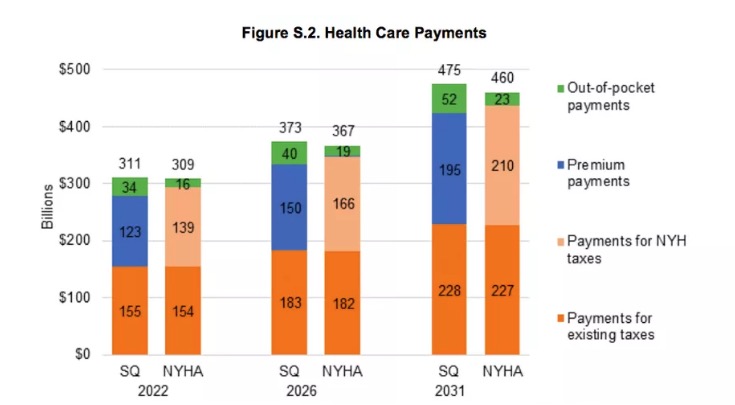 The left columns, the Status Quo (SQ) are higher than the right columns (spending with the New York Health Act in place). So the NYHA will save money. But look at how much it will increase taxes! My God, they’ll double. If we look at this rationally, though, we can see that for the most part, the same money is just flowing through a different fictitious legal entity: the “state” rather than the “corporation.” If, instead of calling it a “tax,” we called it a “premium,” you’d barely notice the difference between the two systems (after all, there’s already a mandate to buy insurance).

Regardless of the specific numbers that any plan ends up with, the principle here is the same: Draw people’s attention to the bottom line. If the criticism is: “Single-payer will double your tax bill,” the answer is “But will it save you money?” Would you rather pay a larger amount in premiums or a smaller amount in taxes? This should not be a difficult sell to the public, even if it requires doing that most “politically suicidal” thing: promising to raise people’s taxes. At least one poll suggests that if people are told that the taxes will replace premiums, as opposed to being imposed in addition to them, most people will support it. But that poll didn’t point out the bottom line: Single-payer is not “government for the sake of government,” it’s about saving people money.

There are plenty of valid questions about Medicare For All plans that advocates should have responses to. I’d like to see good answers to questions like: If Medicare for All cuts costs by limiting payments to providers, how do we ensure that service quality and availability isn’t diminished? I also think we need good answers on the logistics of shutting down an entire industry (private health insurance) and its economic implications.

But there are other criticisms that shouldn’t catch on if the left has its responses ready. Claims that new programs are “politically impossible” should be ignored. The idea that single-payer is “socialized medicine” is the opposite of the truth: It’s socialized insurance, the medicine is deliberately left private. (I think we should embrace the term “socialized insurance” because it’s accurate and identifies the difference between single-payer healthcare and single-provider healthcare. I also think Republicans will have a far harder time scaremongering about socialized insurance, because everyone hates insurance and it makes sense for it to be socialized.)

We need to boldly change the way we talk about taxes, because otherwise we will seem to admit the Republican premise that a tax increase necessarily makes you worse off rather than better off. It’s not true though: Nobody should be afraid of a tax increase that leaves them better off financially than they were before. I think people are capable of understanding this. If a giant increase in the payroll tax to pay for single-payer is making people worse off on the whole, and they’re getting less healthcare for more money, then single-payer is failing. That’s a badly-designed program. A well-designed program is one that will help people. I am not scared of new taxes, if they’re buying services that ultimately benefit me. You shouldn’t be either. The question is: What’s the bottom line?