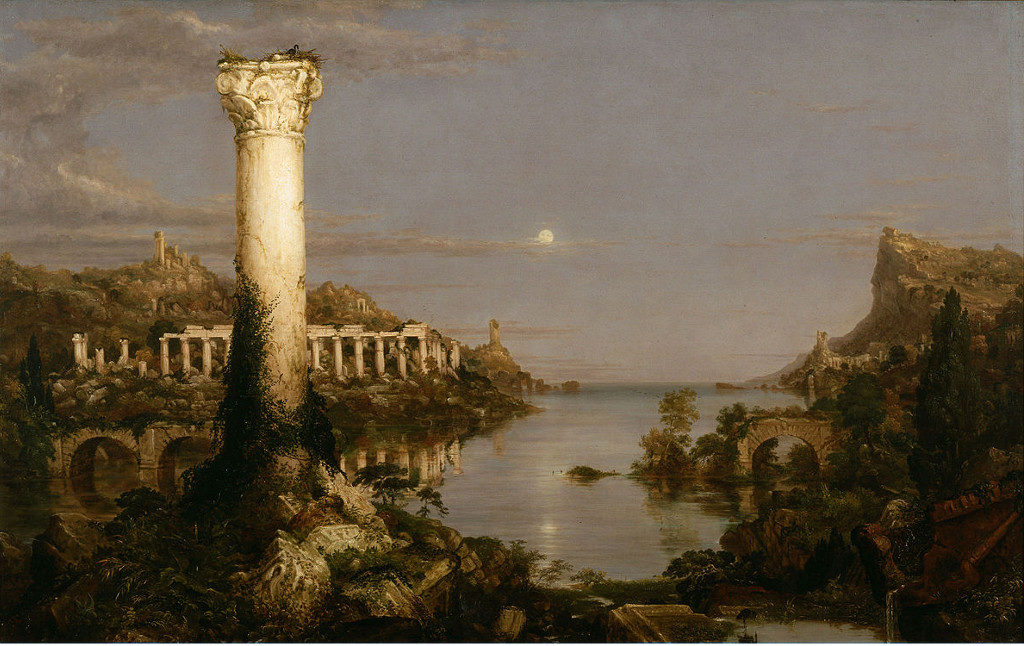 Excerpt from the Current Affairs of 2049…

In my notes this morning, I discovered something strange. A scrap of writing, one seemingly produced by me, but one that I am sure I have never written. It is in my voice, it thinks the way I think, but I had nothing to do with it. It’s hard to take it at face value, because that would require believing the impossible—that it is, as it says, from the Current Affairs of 2049, a ghost of New Year’s future. I am a rationalist, and I do not believe in time travel or parapsychology or cryptozoology, so it is very difficult for me to accept that somehow I will write this piece in 30 years, and it will somehow flutter back to me now. There are paradoxes involved. Besides, it reads more like a somewhat didactic and clumsy attempt at prophecy from present-day me than a genuine temporally displaced artifact. And yet I know, as well as I know anything, that I didn’t write it, have never seen it.

Perhaps you should read the fragment for yourself and see:

Today, looking back at everything I wrote from 2019 onwards, I still think I was pretty perceptive, given the climate of the time. What’s difficult for people to understand, what I can’t even really understand myself, is how everyone—including me—could have been oblivious to so much that was so obvious. I know everyone my age (I am 59) has dealt with the question—even if younger people haven’t asked it explicitly, we’ve all thought it.

Actually, we weren’t even unaware. We knew everything, because we made jokes about it. But we didn’t follow through the implications of what we were saying. There was nobody there to say “Right, but it’s not a joke, is it?” or “And so if that’s true, do you see where it leads? What are you doing standing here?” Is that all we needed—someone to point out that reality is real, that you can’t simultaneously accept something is true and act as if it isn’t? I don’t know what we needed. If you asked a Berliner of a certain era, I doubt they’d have a good answer either.

I’ve been looking through old newspapers and I think one of the main problems was that we didn’t actually have the language to talk about what was happening. The headlines would say “Amazon Seeks To Enter East Asian Markets” or “Deregulation Push At Agency Accelerates.” Everything was reported—the usual criticism of media, that it ignores the facts, was not actually true. If you look at the archives, what you see is something far creepier. It was all there on the printed page, it was just “normalized” to the point where nobody could understand it even as they looked directly at it. The phrase “hiding in plain sight” comes to mind. At one point, I swear to God, the New York Times front page ran a photo across five columns showing George H.W. Bush’s funeral (George H.W. Bush was an insignificant president from the early ’90s, best known for a senseless overseas military action and a pattern of sexual misconduct; the New York Times was a newspaper), with a one-column article squeezed next to it: “Emissions Surge, Hastening Perils Across the Globe.” Oh yes, the perils. Did you see the perils in the paper this morning, dear?

But as I say, it wasn’t just insufficient attention. It was also language itself. Maybe people would have had a better grasp of what was happening if it had been framed more explicitly. “Amazon Enters East Asian Markets” should have been “Amazon Amasses Power Over More Nations, Narrowing Opportunities For Resistance.” But I don’t know, even then people probably would have just watched passively. The newspaper can say “Act Now Or Wolves Will Eat Your Children” and most readers will still just read the paper, go to work, and perhaps make a pessimistic remark to someone. We literally watched people burn alive. “Raising awareness” was a slogan for a while, one that makes me laugh now.

2020 was unfortunate. Usually people treat 2024 as the major event, for obvious reasons. But we all knew 2024 was coming the moment 2020 happened. That sounds strange today, I know, given the mainstream historical interpretation—2020 as a “return to normalcy” after the brief, regrettable detour into Trumpian madness, before the unexpected “backlash” that came in ‘24. There was never any “return,” though. The same conditions were there as had been there for years. The Democrats squeaked into office, but it wasn’t as if they knew how to stop the unfolding forces of history. In fact, personally I think they hastened the ultimate consolidation of power, because by being just “not bad” enough, what had been a thriving opposition movement was sapped of its vitality.

It could have gone the other way, I am still convinced of that. I am not a fatalist or determinist. People make choices, those choices matter. I try not to have regrets, but I keep wondering whether there was something I could have said or done in 2020. Could the “language prison” have been broken out of? I don’t even know today how one could have done it. After all, there was plenty of talk about the “death of democracy” or the “concentration of wealth and power.” They were talking about them at Davos, for God’s sake. (Davos was a conference in which wealthy people pretended to care about others in order to convince themselves they weren’t going to Hell.) Words, words, words, it was all just words. Nobody actually knew what “democracy” meant. Power was consolidating around them, and we were still talking about “regulatory policy.” Everyone still assumed they’d always have the vote.

It all happened in Brazil first, of course. Everyone should have been watching that carefully, since it played out almost exactly as it would here a few years later. Of course, you-know-who made Bolsonaro look like Nelson Mandela. But nobody here could place Brazil on a map. (A map was a way of showing how things looked.)

People were expecting one big Event, and in some ways 2024 was that. But it was mostly frog-in-a-saucepan stuff. We got used to it. Oh, some days the air fills with smoke. That’s just what happens. Then your children grow up never knowing anything different, and eventually there’s nobody around who can even remember that it was once otherwise.

I sometimes insist I wasn’t surprised by anything. But I know that I was, I remember the feeling. A few things truly shocked me, such as how complete the destruction of knowledge could be. “Once something is on the internet it never goes away” is literally a thing I heard people say. No, it can all go away. Every bit of it can be taken. The central lesson, the thing I’d try to impart if I had a chance to go back and shout at my younger self, is how easily things that seem solid can vanish. I remember looking at my mantelpiece and actually thinking “This cannot go away, you will still be here no matter what.” (I liked to talk to objects in those days.) Well, so much for that. No matter what!

I’ll admit, the end of the magazine came as a shock. We had been doing so well. But people’s incomes dried up, and they weren’t spending them on magazines. Besides, there was no way for anyone to access it. With traffic to “fake news” blocked, and anything independent being automatically filtered as “fake,” you couldn’t even tell people you were silenced. The revenue collapsed within six months, the enterprise couldn’t even be sold off. (I got a few hundred bucks for the velvet office chairs.)

I think it’s just very hard to believe that things really can go away until the moment that they do. You don’t know what you take for granted. I just assumed I would live in a world with butterflies, and that they would always be around. (Butterflies were a type of pretty insect. Imagine if the cockroaches had little Persian carpets for wings.) I saw pigeons as a nuisance. I didn’t conceive of the idea that one day I could wake up in a city without birds. The expression is: You don’t miss your water till your well runs dry. And you don’t miss your well until your water reaches the rooftops. Everything had seemed so solid, and by the time I knew how much I loved it, it was gone and I was screaming at no one to please let me have it back. God, I miss birds.

I haven’t talked about the personal losses. My family, my books, my city. In part, I just don’t want to think about it. But also, I have suffered less than almost anybody else. I still write, albeit only for my notes now. With a billion dead, how can I complain?

If my 2019 self was sitting here in my bunker, I wonder if there is anything I could tell him. Not “enjoy it while it lasts,” surely. I could give lessons in how power works: You need to be careful, because it will wrap itself around your neck and only reveal itself when it’s too late to resist. That’s certainly what Amazon did. We all realized what they had done, half a second too late. Call it the “oh, shit” moment. I can’t believe we called them “corporations” and “managers” really. There were so many euphemisms. We lived in a world strung together entirely from euphemisms, one that had almost nothing to do with what was happening or would happen.

I can still feel what it was like on New Year’s Eve, as 2019 began, on my balcony in the French Quarter. (That was a main neighborhood of New Orleans.) I wasn’t naive. Something felt wrong, I could see that even though everyone was drunk and happy in the streets below, there was a sense of it being temporary, of having a few more good parties while there was still time. The waters were rising, but I just stood there. Should I have shouted? Built a raft? Joined a militia? Christ, I don’t know.