Meet The Maverick Thinkers of the Intergalactic Confederacy of Invaders 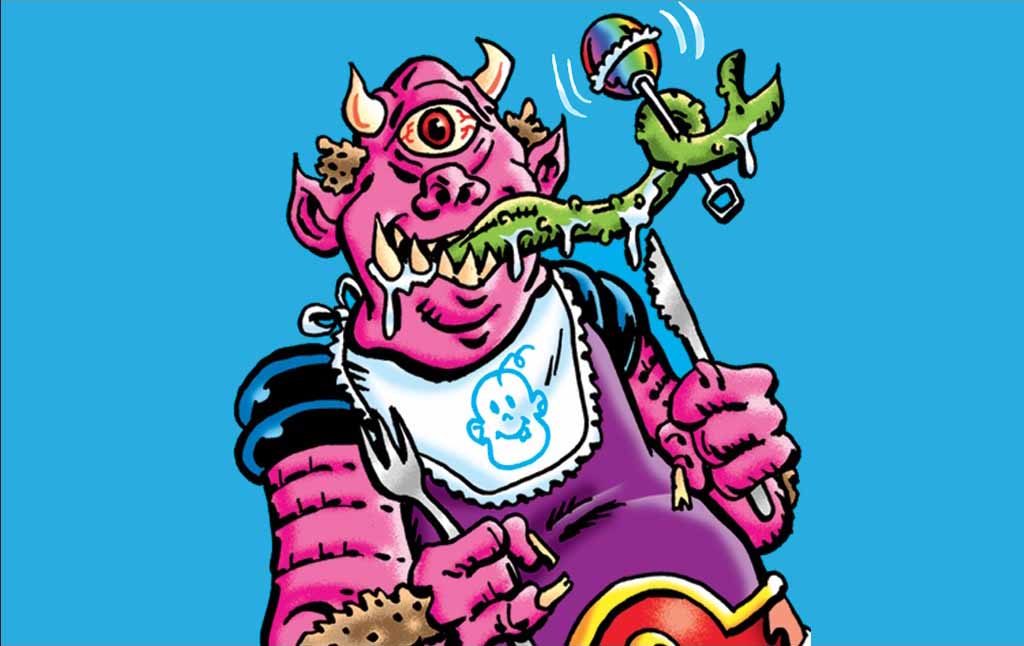 Presented by The New York Times of 2046…

Here are some things that you’ll hear if you sit down at the conference table with the Intergalactic Confederacy of Invaders: there are fundamental biological differences between certain species, and because of that, there must be fundamental differences in rights. Free speech is under assault, and well-meaning, reasonable discourse about vassalage under the Intergalactic Confederacy of Invaders no longer seems permissable on Earth. “Universal justice warriors” are advocating “survival politics”: a toxic ideology that’s tearing the galaxy apart. And we’re at risk if mentioning these facts is considered “radical.”

I met with Borfaz the Devourer, famed warrior of the Hegbolian Assault Corps; Glaxal 47836, the provocative broadcaster and managing director of the Glaxinari Center For Universal Progress; Praxifa of the Toxic Cloud, writer, speaker, lifestyle guru, and founder of TEDxAndromeda; the regal Lharpeneth, Emperor of the Outer Novae, Glory To His Many Conquests; and several prominent Space Nazis From Beyond The Moon. Thirty years ago, they argued, when multiple alien civilizations simultaneously made contact with Earth, the Intergalactic Confederacy’s ideas would not have been considered taboo. At that time, humans had not yet absorbed the enormity of communion with so many new cultures and ideologies, and were more willing to consider a broader variety of thought.

Today, people like these dashing leaders of the Intergalactic Confederacy of Invaders feel they are no longer welcome in Earth’s system simply because they dare to bring up certain adventurous concepts. Their beliefs, once considered tenable, are now met with anger, condemnation, and mean jokes. They’ve been disinvited to the best parties on the Jupiterian Co-Operative Orbital Station and the Free Milky Way University on Titan. It seems that this part of the galaxy is afraid of entertaining certain political formations just because—or so the “universal justice warriors” claim—vassalage under the Intergalactic Confederacy of Invaders might be considered (potentially) antithetical to freedom.

What is the Intergalactic Confederacy of Invaders, and what makes their ideas so risqué? If you ask their enemies, the I.C.I. is a motley collection of murderers, warlords, and slavers from the fringes of deep space. But if you ask their supporters, you’ll hear a different story. The I.C.I. represents a diverse assortment of sexy, dangerous thinkers who dare to explore the dark regions beyond mainstream conceptions of “freedom” “liberty” and “the right not to be eaten.” These brave intellectuals share nothing in common except a willingness to argue, a commitment to civility, and a refusal to surrender their convictions even when the foundations of their arguments are demolished by writers outside the I.C.I. Additionally, they all share the radical belief that their ideologies are perfectly rational, and if other species were simply willing to hear them out they would immediately subordinate themselves at once.

“The universe has become intolerant of certain opinions,” claims Glaxal 47836. “When we simply try to have an open conversation about the moral duty of Glaxinari vis a vis inferior species, we receive a torrent of outrage and cruel jokes at our expense. It’s almost enough to make us stop publicizing our conversations.”

You are probably familiar with Glaxal 47836’s trumpet-like voice. The Glaxinari Center for Universal Progress is co-producer of Coming to Your Senses, the Dominance Hour, and a prime investor in Mastery Entertainment. Despite their popularity in the signal-streaming space, however, Glaxal 47836 and his clutch-brothers feel a constant sense of wounded exclusion. “I care about facts,” says Glaxal 47836. “And the facts tell me that even though I have a #1 show on three different interstellar signal-streamers, Earth and other planets still refuse to allow Glaxinari progressives to monopolize their entire infosphere. This really hurts our feelings.”

“The Free University of the Milky Way hasn’t yet offered me a chair,” coughs Praxifa of the Toxic Cloud. “While I have a guest lecturing position on Titan, I must conduct my classes via holoconference because my presence is apparently “life-threatening” to certain fragile species. I don’t know when university students became such delicate snowflakes! I was no-platformed from physically appearing last EY just because when I praise Neocolonialist Technomics, I also tend to exude a chemical aura that melts human lungs. I’m suing the university for the incident.”

What does Praxifa want from the Free Milky Way University? Respect. “Neocolonialist Technomics has not—as some hateful and close-minded scholars claim—been entirely undermined by its tendency to immiserate entire star systems. It’s a legitimate perspective and deserves a fair place in the discourse, even if its expression is a little noxious to some weaker creatures.”

“The problem is fear,” growls Borfaz the Devourer. “When you simply suggest that the young of certain species should be dried into jerky to feed the brave warriors of the Hegbolian Assault Corps, people shut down. They call you a cannibal.”

A tear falls from his cyclopean eye. He wipes it away with a calloused pink hand. “I just have heterodox ideas about sentient species edibility. Why are people so unwilling to engage my arguments?”

It’s true that “cannibalism” technically refers to the act of eating a member of your own species. There’s nothing “cannibalistic” about consuming the young of a different alien race, sentient or not. An obvious logical fallacy, and yet “universal justice warriors” continually shut down any debate on the subject.

“In truth, I have had my own battles with them,” says the majestic Lharpeneth, Emperor of the Outer Novae, Great is the Terror of His Armies. “Not literal battles, as my legions have been fenced out of most star systems by impenetrable force fields. But when you merely suggest, through a peaceful intermediary, that you’d like to offer a clean solution to the problem of intergalactic unemployment…” He shrugs. He’s quite physically striking, the tall and handsome Lharpeneth, Emperor of the Outer Novae, Splendid Are His Plunder-Houses. He beams at me. “All I desire is to benefit the citizens of this universe. What crime is there in gently ushering unemployed aliens to my asteroid mines?”

Praxifa of the Toxic Cloud leans forward, or seems to—it’s difficult to tell under the smoke. “Let me guess: when you suggested this pleasant and highly advantageous work opportunity, the hysterical UJWs compared it to slavery?”

Everyone laughs. The members of the I.C.I. laugh often, especially when they agree, which is almost always. Though they may differ moderately in matters of policy and metaphysics, they all agree on one point: it is their task, as intellectually superior beings, to shepherd the galaxy toward truth and justice.

“Look,” says Glaxal 47836. “There are obvious physical differences between Glaxinari and humans for example, yes? I mean, we all see the differences. We all acknowledge that undersea clutch-breeding is a far more effective reproductive method than live mammalian land-births, right?” The members of the I.C.I. nod. “So if evolution favors us, why isn’t it appropriate for Glaxinari to dominate less well-adapted species? That’s the way it’s always been in the Glaxinar system. We just want to return to our traditions, when Glaxinari were Glaxinari and everyone knew their place.”

At the end of the table, the Space Nazis From Beyond The Moon stir uneasily. As former humans, they can occasionally become uncomfortable with identitarians of other species. “We know there is not lebensraum in the universe for everyone,” confesses Hydrus Himmler to me afterward. “But as long the I.C.I. remains united against our enemies, such as the Anarcho-Socialist Robots of the Emma Goldman Collective, we will maintain our non-aggression pact with the Glaxinari.”

So when Cetus Goebbels signal-streams messages such as “we should not ban people from intergalactic intellectual life just because they hold different ideas” he’s picking up on a real phenomenon: that the boundaries of intergalactic discourse have become so proscribed as to make it very difficult to hold frank discussions of anything remotely controversial, like the existence of the Universal Jew who secretly controls all the universities and signal-streams.

Am I member of the I.C.I.? Like many of the I.C.I.’s luminaries, I am a neoclassical liberal who has run afoul of the UJWs, in my case merely for suggesting that university professors who oppose the Reconquistadors on Aldebaran 5 should be fired from their posts. This has won me praise from the I.C.I. But do I feel comfortable being associated with such people? The kind of people who are only invited to parties at eighty percent of the universe’s intellectual centers, as opposed to all of them?

I understand the appeal of the I.C.I. I share the belief that all ideas should be discussed freely, except for really out-of-bound nonsense such as “liberty” for the terrorists masquerading as freedom fighters on Aldebaran 5. But, given how prominent the I.C.I. has become, I hope they find a way to streamline and civilize their message until it can find a home among mainstream intergalactic discourse once again.

“Some say the I.C.I. is a band of dangerous, beautiful renegades who are too intellectually superior to be appreciated by the more foolish species in this universe,” says Praxifa of the Toxic Cloud. “But the only way you can pretend that a group of intellectuals merely sitting and chatting about their obvious right to rule the galaxy is dangerous is if you are scared of new ideas.”