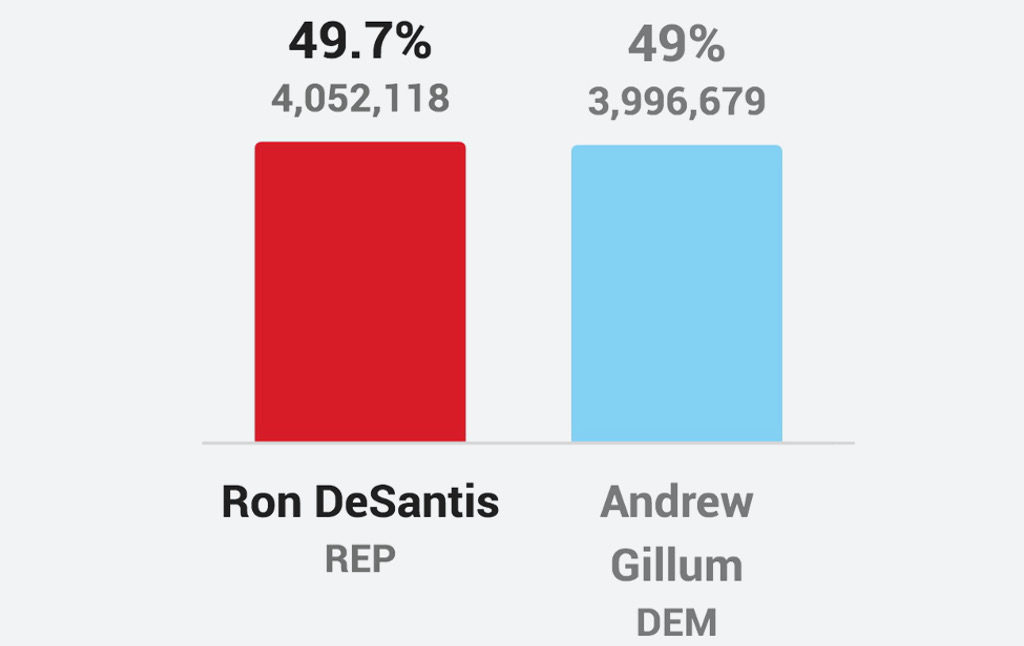 There is good news. There is bad news. The fight continues!

I disliked the phrase “blue wave” from the first time I heard it. Not only did it smack of the same Democratic complacency that was so damaging in 2016, but it suggested an entire theory of politics that I think is dangerous: You don’t need to actually do anything other than vote, because political outcomes are determined by the “tides of history.” Whether Democrats win elections is not a function of the strategic choices they make, but a series of political science variables like “whether there is a Republican in the White House.” The world is complicated, though, and Zeitgeists are unreliable allies.

In last night’s midterm elections, we did not get a big blue wave. We ended up with a blue ripple. It was thoroughly mixed news: For every extremely encouraging victory, there was a depressing defeat. Here’s the good news and bad news for the left:

What can we say about all of this? What lessons should we take with us for 2020?

First, it’s obvious that we can’t rely just on the country’s dislike of Trump’s presidency to turn red states blue. The midterms were often described as a “referendum on Trump.” If they were, that’s concerning: Important swing states like Florida and Ohio both elected Republicans to statewide office. Ron DeSantis’ outright sycophantic behavior toward Trump did not seem to hurt him, and Florida is clearly going to be very tough in 2020.

Encouragingly, some of the margins were very slim. I am not pleased that the nation has at least six more years with Ted Cruz, but he only narrowly beat Beto O’Rourke. In TEXAS! Before the election, a Politico writer suggested Beto was going to “blow it” because he had embraced left ideas like abolishing ICE. Perhaps that did keep Beto from peeling off some Moderate Republicans, but it’s remarkable that even with this kind of “radicalism” he very nearly defeated an incumbent Republican in a deep-red state. In fact, by “running to the left,” Beto managed to outperform all of the previous Democratic challengers! That, to me, suggests that this is the right strategy. If you run on a progressive platform and come closer than you’ve ever come before to winning, well, maybe you’ve hit on something. Texas did not turn blue last night, but Cruz’s tiny margin of victory confirms that it’s absolutely possible to flip Texas sooner or later.

The Democratic Socialists continue to quietly infiltrate state and local politics. While national attention is paid to high-profile races like the Florida governorship, leftist candidates are making their way into important local offices: onto city councils and into judgeships. Houston now literally has a socialist public defender as a criminal court judge! Who would have thought such a thing could happen in the city that was once the “capital of capital punishment”?

The Democratic Party itself is incredibly disorganized and still losing winnable races. There’s something very wrong when Vermont is electing a democratic socialist senator and a Republican governor, and prominent Maryland Democrats are literally throwing their nominee under the bus and endorsing the “moderate” Republican. (There’s a special place in Hell for Democrats who didn’t support Ben Jealous.) It’s great that O’Rourke and Gillum came as close as they did to winning, but close races should inspire soul-searching: Why weren’t we able to get them over the top? Who screwed up here? Andrew Gillum lost by about 52,000 votes. If 27,000 people had switched, he could have won. That’s less than the population of Plant City, FL, the 75th largest municipality in the state. An election that turns on Plant City is winnable, and if Democrats lose it, we need to figure out how not to do that next time. Control of the Florida state government is important. Not only does Florida voter suppression determine the fate of the country, but as climate change threatens to cause terrible harm to Florida cities, we need people in charge with a serious environmental agenda.

I am not encouraged by the fact that immediately after the election, instead of promising to fight harder next time, examining the party’s mistakes and figuring out how to support the next wave of challenges, Nancy Pelosi was promising “bipartisanship” and collaboration with Republicans. Don’t collaborate with Republicans, Nancy! Nothing they want is good! Pelosi said the country is tired of “division.” Well, it’s true that I don’t like division. But what I’m mostly tired of is the right-wing agenda, and I’d rather like it if the “liberal” congressperson from San Francisco was more committed to countering that agenda than making nice with it. As my colleague Luke Savage writes, bipartisanship is a curse that only ever produces terrible outcomes. I think Katherine Krueger of Splinter is exactly right: Chuck Schumer and Nancy Pelosi are dragging down the Democratic Party. They have had little hand in its victories but are contributing to its losses. They need to be ousted as soon as possible.

The fact that progressive ballot initiatives won much more easily than progressive candidates might tell us something: People want a left agenda, they just don’t trust the Democratic Party to give it to them. We need good candidates who know how to win elections. In 2020, it will be essential to actually offer people something: not just charisma, not just anti-Trump platitudes, but a series of concrete promises for ways that voters’ lives will be improved. We need a simple but ambitious multi-point program that every candidate gets behind. (And it had better have a climate change component!)

We’ve also got to understand how Republicans win: They have a formidable propaganda apparatus and political machine. Democrats rely on waves, Republicans rely on institutions: FOX News and Prager U and Breitbart and the Wall Street Journal spread the message, ALEC drafts the legislation, Turning Point USA and Young Americans For Freedom nurture the young generation, the Federalist Society molds the judges, George Mason University mints the economists. They do not win because they are the majority (most people want, even Republican voters, want “far-left” policies like Medicare for All), but because they are organized and ruthless and they know how to play politics. They do not plead for bipartisanship. Instead, they make war, using every resource at their disposal. We need a left media apparatus to counter FOX, a left policy shop to counter ALEC, left organizers to counter FreedomWorks and the NRA, and left economists/intellectuals to counter the Chicago School/George Mason types.

2020 is winnable, but it will not be won by praying for a wave to come and wash away the country’s sins. The Democratic Party is incapable, on its own, of taking advantage of the opportunity presented by Trump’s unpopular administration. Meanwhile, the Democratic Socialists are building an impressive campaign infrastructure and grooming the next generation of progressive office-holders. If Trump is to be defeated, and there is no guarantee he will be, we need to take lessons from last night’s victories and closely examine the defeats in order not to repeat them.

I’d also like to extend personal congratulations to my friend Joshua McLaurin, who has been elected to the Georgia House of Representatives after surviving an absolutely vicious and absurd smear campaign by Republicans.