The Cult of the Form 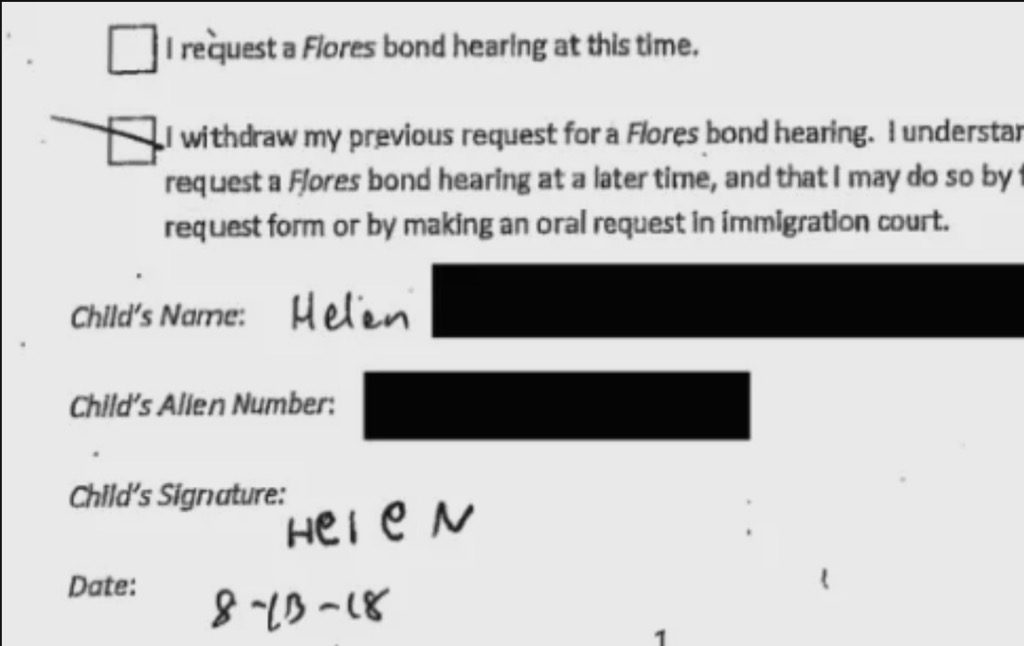 In the list of disturbing immigration stories coming out of the Trump Administration, this one is particularly striking. Helen, a five-year-old Honduran girl, got lost inside the immigration bureaucracy after DHS got her to sign a form waiving her right to a hearing. Reading it, though, something didn’t make sense to me. Why did they even bother having her sign the form? She’s five. I know that the Trump Administration is cruel, and is willing to punish families by taking their children away and cutting off all communication. But why the form? Is the form supposed to confer some legitimacy on this process? If they can convince little Helen to print her name, on a totally unintelligible legal document in a language she doesn’t speak, do they think that makes some kind of important difference? The DHS bureaucrat who “helped” Helen sign away her rights must have felt there was some significance in the form, that they needed the form in order to be able to do it. But why? Is there judge who would refuse to sanction the detention without the form, but would be okay with it if a five-year-old signed it?

Perhaps there is such a judge. Which shows you just how bizarre the Cult of the Form is.

To me, one of the most sinister rationalizations of evil is: Well, you signed on the dotted line. Libertarians use this a lot to explain why there’s nothing exploitative or objectionable about capitalism: If you can get someone to sign a contract agreeing to something, then they have no grounds to object to it. After all, they signed. If they didn’t want the consequences, they shouldn’t have signed. Since they did sign, tough shit.

The absolute deference to contracts encourages companies to simply mandate that their customers or employees sign forms waiving as many of their rights as possible. So we get arbitration agreements, which specify that if the company wrongs you, you can’t take them to court even if they egregiously violated the law. Instead, you have to accept the binding decision of a private arbitrator. We also get “class action waivers”: You forfeit your right to participate in a class action lawsuit. Oh, and for employees, non-compete agreements: You agree that if you leave the company, you won’t go to work for a rival company… meaning that you won’t get another job in your field.

It’s obvious why these contracts have no legitimacy: There’s a gigantic power imbalance between the entity offering the contract and the person agreeing to it. If I have to work, and all of the employers want me to forfeit all of my rights as a condition of working, then unless I want to go without work I have to forfeit my rights. Which means I don’t really have any rights at all! We on the left understand that the libertarian notion of “consent” is often a fiction. Contracts aren’t negotiated by parties of equal bargaining power.

But there’s this weird notion, not uniquely American but definitely particularly strong here, that the form is all that matters. If a confused old person gets bamboozled into signing away their life savings, well, they signed. If a poor person signs a layaway contract, making far more in installment payments than the item is actually worth, but then misses a payment, if the contract says the item can be repossessed, well, the person should have been more responsible. If your insurance contract contains a clause you didn’t know about, which renders the whole policy worthless in exactly the sort of situation you thought you were insuring yourself against, well, why didn’t you read the contract more closely?

There’s another related notion that I encounter a lot in the United States: the idea that any bureaucratic policy is justified, no matter how irrational, inconvenient, or unjust, because it’s the policy. “I’m sorry, but that’s our policy” is constantly used as an explanation for why a corporation refuses to help you with something. (I recently watched a Spirit Airlines employee explain to a Japanese traveler that she had no grounds to complain when the airline canceled her ticket after she arrived less than 45 minutes before her flight. It was their policy.) I think the failure to challenge this notion is partly responsible for the proliferation of voting restrictions. It is accepted in this country that unless you submit your voter registration packet by a certain date, with the correct documentation, you do not get to vote. There is a procedure, and if you violate it, you are at fault. But that is not how our thinking should go: Instead, we should presume that people ought to get to vote, and any procedure ought to be presumptively invalid that gets in the way of that end.

For a country that loves individualism and small government, the United States seems incredibly deferential to rules and bureaucracy. Personally, I care much more about principles than rules, and I rather like Wikipedia’s philosophy, which is that all of its internal rules should be broken if applying them would conflict with the underlying principle they’re supposed to embody. This is also one reason why I find “strict construction” in judicial interpretation objectionable: It means allowing yourself to be governed by The Form rather than any actual moral values.

Helen signed the form, so… what happened to her was okay? That does seem to be the standpoint of the Form cult. Did you understand the form? Doesn’t matter. Were you pressured? Irrelevant. The only question is what the form says, and what the form says goes.