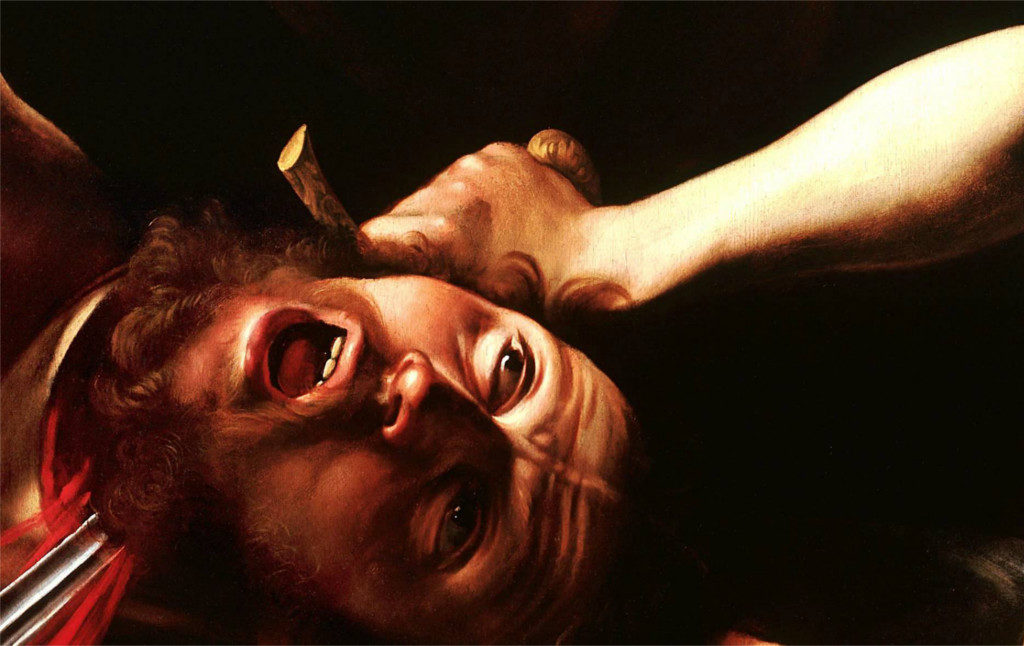 Today in Current Affairs, we examine an urgent and timely topic: Judith’s beheading of Holofernes! This story comes to us from the Book of Judith, a biblical text about the attempted conquest of Israel by the Assyrians. Judith is a Jewish widow who ingratiates herself with the invading general Holofernes, waits for him to fall asleep, and then hacks his head off and takes it home with her (thus thwarting the entire invasion, because the Assyrians evidently had no Plan B if Holofernes was killed. Solid military strategy, Assyrians.) The Protestants threw the Book of Judith out of their bible on the grounds that it wasn’t recognized as authoritative in the Jewish tradition, but the Catholic and Orthodox churches have retained it on the grounds that it’s metal as hell.

For centuries, “Judith Beheading Holofernes” was a popular subject among European painters who wanted to depict a righteous woman cutting off the head of a brutal man. Before you get too agitated, male readers, please note that #notallmen are getting their heads cut off in the following paintings, just Holofernes. If you identify more with Holofernes than with Judith, that’s definitely something for you to unpack in the privacy of your own head! and not in DMs to us, which we will not read anyway.

So which of these glorious paintings best captures the bloody satisfaction of a local heroine tricking and murdering an invading colonizer? Your Senior Editor, Brianna Rennix, and Amusements Editor, Lyta Gold, have put together the following list for your exclusive enjoyment. These rankings are canonical, and cannot be disputed.*

Brianna: Question: would having a giant poster of Judith beheading Holofernes in my living room be Too Much

Brianna: hahaha I don’t think I’ll actually do this because I don’t want to creep out my guests!

Lyta: honestly if someone is creeped out by it they don’t deserve to be there.

Brianna: everyone in this one is so BORED

can’t get out of bed

Mondays am I right

Lyta: in a classless society, all women will be both head-sack-holder AND beheader

Brianna: YOU CHOP YOU SACK

SACK WHAT YOU CHOP

we can work on the slogan

Lyta: did you hear something

was it the sound of a fuckface being dead

Brianna: or is Holofernes still mansplaining from beyond the grave

death alone will not stop him

Brianna: but she’s like I DON’T CARE HAVE YOU SEEN MY HAT?

Holofernes’ neck is so gnarly tho

Brianna: yeah the painter was definitely going heheheheheh ewwwww the whoooole time he was painting that

Lyta: that dragon is like “man i was just curling up for a nap and suddenly heads are getting sliced, I am outta here”

Brianna: is that a dragon? is it a… friendly giraffe? is her maid a giraffe in this one?

Lyta: “the fuck are you looking at”

Brianna: Judith is rocking that orange dress and also that head like it’s an on-trend handbag

Lyta:     MAIDSERVANT: Judith, do you want to wrap that head in a bag or something? It’s dripping everywhere.

Brianna: side note: I am sad her sword is off-screen in this picture because it would really complete the look

Lyta: oh I didn’t see you there

Brianna: *looking down, realizing I forgot to wear a bra today*

Lyta: I really thought I’d put that head away in my head-drawer

Brianna: standing on this head makes my calves look amazing

Lyta: “well I’m pregnant, and they say you need protein, so…”

Brianna: Okay, that head is TINY, that’s a baby-sized head with a full beard, I need some more backstory on Holofernes immediately

Brianna: Also why is she wearing three wraps on top of each other and why does she have a special wrap just for her crotch

i don’t know if that’s a thing. relatedly: pregnancy is inexplicable and terrifying to me

Lyta: MAIDSERVANT: Why do I have to carry this fucking head everywhere. He’s YOUR victim

JUDITH: Those are the rules. I chop, you carry.

Brianna: YOU SACK WHAT YOU CHOP

Lyta: YOU KEEP WHAT YOU KILL

Brianna: Judith’s just got her hands full with that tiny sprig of parsley or whatever she’s carrying there

Lyta: bet this Judith didn’t even behead him herself. she ordered her maid to do it and then posed with the sword afterwards

Lyta: This one is pretty and famous but I am not feeling it

it’s the Blake Lively of paintings

Lyta: “is this even the right angle? I should have practiced first”

“I’ll do better next time”

Brianna: Now Artemisia’s Judith is COMMITTED TO THE BEHEADING

Lyta: the maid is just as involved

This is true class-intersectional feminism

Brianna: I feel like Artemisia has actually thought through the logistics of overpowering a grown man and hacking his head off, it’s much more useful to have your accomplice help you hold the guy down than to just stand patiently at your elbow holding a bag

he actually stood trial and was convicted, though his conviction was later reversed

* We recognize that the genre of Silly Paintings Rankings was pioneered by the now-defunct website The Toast, and specifically by Daniel Mallory Ortberg, one of the funniest human beings alive. We will never be as witty as Daniel. This list is part of an elaborate multi-step plan to lure him into writing for Current Affairs.

Adrian Rennix  Lyta Gold is the Amusements and Managing Editor at Current Affairs.