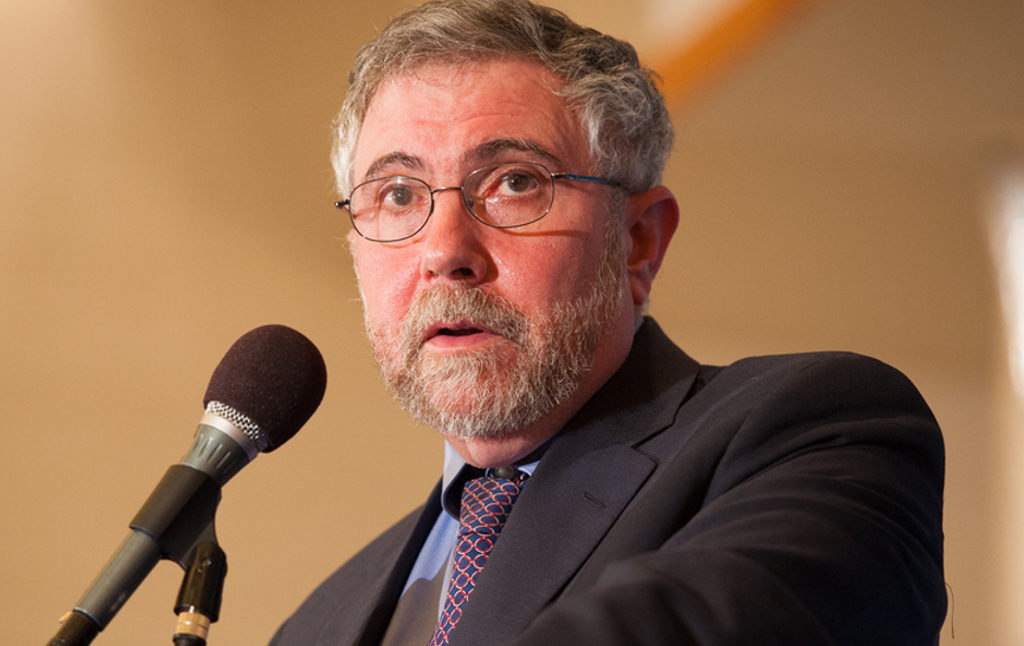 A history lesson for Paul Krugman…

Paul Krugman had a column a few weeks ago called “Fall of the American Empire” about Donald Trump’s repudiation of “the values that actually made America great.” It is worth analyzing, because it is amusing and illustrative. Krugman believes that Trump is threatening to destroy America’s great “empire” and that this is bad, because our country’s “empire” is good and noble. Trump, Krugman suggests, is an aberrant departure from the lofty values and ideals that have guided our foreign policy for most of the past century. In fact, let’s have a look at a chunk of Krugman’s column so he can put things in his own words (please retain your guffaws until the end):

[W]e emerged from World War II with a level of both economic and military dominance not seen since the heyday of ancient Rome. But our role in the world was always about more than money and guns. It was also about ideals: America stood for something larger than itself — for freedom, human rights and the rule of law as universal principles. Of course, we often fell short of those ideals. But the ideals were real, and mattered. Many nations have pursued racist policies; but when the Swedish economist Gunnar Myrdal wrote his 1944 book about our “Negro problem,” he called it “An American Dilemma,” because he viewed us as a nation whose civilization had a “flavor of enlightenment” and whose citizens were aware at some level that our treatment of blacks was at odds with our principles… But what does American goodness — all too often honored in the breach, but still real — have to do with American power, let alone world trade? The answer is that for 70 years, American goodness and American greatness went hand in hand. Our ideals, and the fact that other countries knew we held those ideals, made us a different kind of great power, one that inspired trust. Think about it. By the end of World War II, we and our British allies had in effect conquered a large part of the world. We could have become permanent occupiers, and/or installed subservient puppet governments, the way the Soviet Union did in Eastern Europe. And yes, we did do that in some developing countries; our history with, say, Iran is not at all pretty. But what we mainly did instead was help defeated enemies get back on their feet, establishing democratic regimes that shared our core values and became allies in protecting those values. The Pax Americana was a sort of empire; certainly America was for a long time very much first among equals. But it was by historical standards a remarkably benign empire, held together by soft power and respect rather than force.

I have said before that Trump exceptionalism will kill every one of your brain cells. By this I mean that there is a strong liberal tendency to see Donald Trump as totally different from any president who came before him, and to end up defending the indefensible records of prior administrations in an attempt to prove just how radically Trump departs from precedent. Krugman’s column is a perfect example of this tendency. Because he wants to show that Trump has destroyed an America that was “actually great,” he has to rewrite the entire history of post-World War II American foreign policy. He has to dismiss unspeakable crimes as minor blips, and avoid mentioning countless instances of intervention that show American policy to have been anything but idealistic and principled.

Krugman says that the United States largely refrained from pursuing selfish interests, instead helping create democracies around the world because of our commitment to our values. While there were regrettable exceptions such as our “not at all pretty” actions in Iran (a bit of an understatement to describe engineering a coup and installing a dictator), we are largely a country where “goodness” and “greatness” go hand in hand, and who only interfered in “some” developing countries, mostly with “soft power.” (It’s soft! Like giving them a cuddle. Except they’re being cuddled with crippling economic sanctions.)

Perhaps the best place for Krugman to begin correcting his misimpression is the excellent Wikipedia article “United States Involvement in Regime Change.” He might learn quite a bit about how his country has pursued its noble democratic ideals over the past century or so, in “some” countries including Vietnam, Guatemala, Lebanon, Iraq, Libya, Indonesia, the Dominican Republic, Afghanistan, Bolivia, Congo, Grenada, Honduras, Chile, Brazil, and Cuba. The United States tried to replace foreign governments 72 times during the course of the Cold War alone. The history of the CIA in the 20th and 21st century is a history of assassination and torture, and a cursory look at the history of the agency shows that our interventions in other countries were bloody, secretive, and definitely not “benign.” Patrice Lumumba was the democratically-elected Prime Minister of the Republic of the Congo. The CIA plotted his death, and collaborated with his eventual killers. Salvador Allende was the democratically-elected president of Chile. The United States fomented a coup against him, one that eventually led to thousands of Chileans being tortured and killed. Jacobo Árbenz was the democratically-elected president of Guatemala. The United States deposed him and installed a dictator. The United States supported the mass killing of leftists in Indonesia, death squads in Nicaragua, and continues to support the horrific human rights abuses committed by Saudi Arabia. (Barack Obama offered the country $115 billion dollars in weapons, which are used to massacre Yemenis attending wedding ceremonies.) I could spend all afternoon listing horrendous things that our “benevolent” empire has done, the dictators we have supported in the name of “democracy,” and our long history of interfering in foreign elections to subvert the democratic will of other countries’ people. But instead I’ll recommend Krugman pick up a copy of Understanding Power.

United States foreign policy has consistently been motivated by the “United States’ national interest,” not a concern for “democracy.” If we valued democracy, we wouldn’t meddle in elections in order to try to put leaders we like in power. But we have done this constantly. Very, very few U.S. policies are primarily motivated by a sympathetic concern for the welfare of other people, though they are usually framed this way. The Vietnam War, portrayed as an attempt to preserve “democracy,” was anything but. The U.S. didn’t give a fig about the will of the people of Vietnam, and many policymakers were motivated by little more than a desperate desire to avoid being “humiliated” or “losing a war.”

Here, then, Paul Krugman, part of the progressive wing of mainstream U.S. discourse, is openly arguing that the United States should have an “empire,” that its proper place is as the benevolent monarch of the world, elected by nobody but in charge of all. It doesn’t matter whether anybody wants this, it’s our right because we’re so “good.” Of course, the only way to portray ourselves as good involves sweeping almost the entire historical record under the rug. But we do say the word “democracy” a lot.

I was especially amused by Krugman’s argument that American hypocrisy is actually symbolic of its virtue. We “were aware at some level that our treatment of blacks was at odds with our principles,” which shows that we have principles that we were “honoring in the breach,” as if being aware that you’re doing something wrong and doing it anyway makes you a better person. I think we can see here a good example of the extreme moral contortions are necessary to avoid concluding that the United States has historically been a self-interested country largely indifferent to the welfare of anyone other than its ruling majority. Any neutral evaluator would have to say that self-interest has been a far larger force in determining U.S. policy than “idealism,” and the favored American economic theories even imply this, but it would spoil the liberal image of the United States as a well-meaning democracy that makes occasional missteps in its ongoing effort to spread goodness and light. (See the Ken Burns/Lynn Novick “mistake” view of the Vietnam War, in which the war is portrayed as having been waged “in good faith” by decent people, when it was actually waged in bad faith by callous racists.)

It’s not surprising to see Paul Krugman defending American empire, although it’s a little remarkable to see him literally using the word “empire” as a positive. One of the central differences between liberalism and leftism is that liberals believe American dominance over the world is a good idea, but just needs to be run by decent people, while leftists believe that it’s impossible to talk of democracy while also imposing your will on others. Richard Seymour’s excellent book The Liberal Defense of Murder shows how liberals throughout recent history have used rhetoric about humanitarianism and democracy to justify nationalistic wars of aggression.

But it’s vital to avoid this liberal view of American history, because it’s a false view that leads to ignorance. Garry Kasparov, in criticizing Donald Trump’s warm praise of Vladimir Putin yesterday, said he was “ready to call this the darkest hour in the history of the American presidency” and couldn’t think of any other. I’d say that the half million people killed in the Iraq War, the Indians slaughtered and deported by Andrew Jackson, the dissidents thrown in jail by Woodrow Wilson, the slaves sold by Thomas Jefferson, the Rwandans left to die by Bill Clinton, the Nicaraguans killed by Reagan-armed paramilitaries, the Jewish refugees turned away by Franklin Roosevelt, the Japanese civilians bombed by Truman, and the Vietnamese mothers who saw their children poisoned by Agent Orange might be able to think of a few other “dark hours.” I am sure some would insist that people who say this aren’t speaking literally, but it often seems as if they are. Kasparov certainly seemed to be. And Krugman says that Trump “praising murderous dictators” is “a systematic rejection of longstanding American values, though the president often voted the greatest ever praised the Indonesian mass murderer Suharto for his “wise and steadfast leadership.”

It is, of course, important to oppose Donald Trump for doing atrocious things, of which he does many. But it’s also important to be principled, and not to let one’s dislike for Trump become a defense of American empire. Being consistent means acknowledging that Trump is not as much of an aberration as we might like to think, and is in many ways a particularly grotesque continuation of longstanding presidential practices. The task of a decent human being is to oppose both Donald Trump and American empire more generally, not to wish for an “empire with a more benevolent face.”