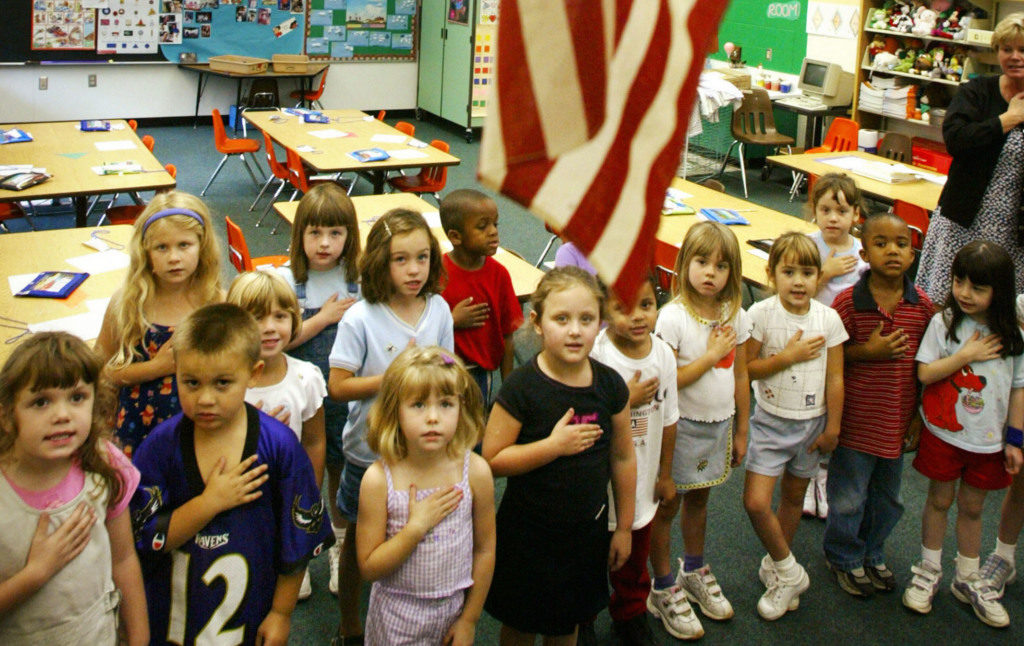 This dumb, creepy ritual should never have been imposed on kids.

As if it wasn’t bad enough being a small refugee child living without your parents in an old Walmart, apparently at least one immigration jail (sorry, Detention Facility) makes children recite the Pledge of Allegiance each morning. According to an immigration official, it’s “out of respect” for the country, though it’s unclear why a bewildered Guatemalan child should owe “allegiance” to a country that is imprisoning her so that it can later deport her. (According to the Washington Post, they do provide children with “hair gel, one spoonful at a time,” so I guess there’s an expectation of gratitude.)

Of course the children, many of whom are not proficient in English, will barely understand what they are being asked to say. Heck, when I came to this country, I didn’t understand what the Pledge of Allegiance meant when I started having to say it in school, and English is my first language. The pledge, for most of the (millions of?) young people who say it or sit through it every morning, is empty of any substantive significance.

It is, however, incredibly creepy and borderline fascistic. I honestly can’t believe we still make kids do it.

Reading about the Spanish-speaking kids reciting the Pledge in immigration jail made me start thinking about just how weird it is that this ritual even exists. I haven’t set foot in a grade school in 10 years, and part of me genuinely wondered whether I had imagined it: Did they really make us recite a loyalty oath to the country every morning? That sounds like something you’d get in an authoritarian communist country, not the Land Of The Free™. Or at least it would be some relic of McCarthyism, remembered with a chuckle by kids that grew up in the ’50s, as much a historical curio as duck-and-cover practices. But I didn’t grow up in the ’50s! I grew up in the ’90s and early 2000s! Surely, though, they couldn’t still be doing it.

They are, though. Conversations with teacher friends confirmed that the pledge is still very much a part of the average American schoolday. And while there are plenty of places where it isn’t taken very seriously, that’s certainly not true everywhere. A substitute teacher I know says he was reprimanded by administrators after being seen walking through the hall during the pledge instead of stopping and standing. Plenty of states require the pledge by law, and in some Florida schools one needs written parental permission to opt out. (In Texas, you also have to stand for the “Texas Pledge,” so that you can thank Mother Texas for watching over you with loving grace. I have trouble imagining how anyone gets through this farce without laughing.) Theoretically, thanks to heroic child-dissents in the 1940s, no student can be required to say the pledge. But legal rights that exist on paper are often absent in practice, kids do still get suspended over it from time to time. I remember from my own high school years that students who declined to say the pledge were often punished by their teachers. My friend Paul was sent to the principal’s office multiple times over his decision to sit quietly for the pledge. The school called his grandparents in for a conference, and when it became clear that Paul had the full support of his family and couldn’t be shamed, the teacher allowed him to sit out the pledge (if he left the room) but openly despised him from then on. Even if students can challenge an expulsion or suspension (assuming they’re in a public school), the social costs can be  high, and they risk being branded a troublemaker.

I wondered if other countries had school kids swear a daily loyalty oath to the country and its flag. Turns out very few do. North Korea does, but other than that it seems to be us and a few other authoritarian countries like Singapore and Turkey. Europeans can be baffled by the Pledge when they first see it, because it seems like the sort of thing you’d get in, well, North Korea. It’s the kind of practice a country institutes to turn kids into mindless servants of the nation, obeying instructions they don’t understand and saying words they don’t mean.

That’s one of the chief problems with the pledge: Kids are too young to actually make a reasoned decision as to how they feel about the words, meaning it’s nothing more than obedience training. It might as well not even be about the country, it could just be called the Obedience Pledge. Or, since most children mumble it anyway, the Morning Mumble. (“Please all stand for the Morning Mumble.” “Mumblemumblemumblemumble.”) My friend Michael drew my attention to this sketch by The Whitest Kids U Know, with a rewritten pledge designed to capture the true spirit of the thing:

I pledge allegiance to the flag of the United States of America. Thank you very, very much for letting us little kids live here.  It really, really was nice of you.  You didn’t have to do it and it’s really not creepy to have little, little kids mindlessly recite this anthem every day and pledge their life to a government before they’re old enough to really think about what they’re saying.  This is not a form of brain washing.

Of course, you sound like a conspiracy theorist when you say “brainwashing,” and I don’t think there’s that level of intention behind the pledge. In fact, I suspect its continued presence in American schools has less to do with patriotic sentiment than the highly authoritarian character of our education system. I think students are punished for refusing to say the pledge partly because teachers love the flag, but partly because they simply cannot tolerate disobedience and dissent. Noam Chomsky (I’m sorry, I’ll put a nickel in the Chomsky Jar) has a passage in Understanding Power where he talks about his friend Morris Halle, who came to the U.S. from Latvia as a teenager. Halle’s first reaction to the American public school system was shock that it cared much more about conformity than academic performance: He was severely punished if he was even three minutes late for class, but he could get a C on a test and nobody would care. In a system that valued freedom and intellectual excellence, of course, you would be rewarded for how much you learned and nobody would care whether you followed the rules. The United States is a land of rule-worship, though. A place of If You Can’t Do The Time, Don’t Do The Crime, and If They Didn’t Want To Have Their Children Taken Away, They Should Have Followed The Law. It’s a country whose law enforcement officials (and school administrators) generally have very few qualms about enforcing arbitrary, unjust, or downright stupid rules, because The Rules Are The Rules.

Of course, Americans also like treating things as sacred, traditional, and unquestionable that were actually established very recently and that we did without for most of our history. Like the Star-Spangled Banner (adopted as the national anthem in 1931) and Immigrations and Customs Enforcement (established 2003), the Pledge was adopted during the lifetime of living people, having been made official in 1942. It was written by a socialist (a quite misguided one), and has been through a notable series of evolutions. A lot of people know that “under God” was not originally in the pledge, and much of the controversy over it has (mistakenly, in my view) centered around those two words. But it didn’t originally say “the flag of the United States of America,” either. Originally, it just said “my flag,” but amidst worry that foreign students would secretly be loyal to other flags, the language was change to specify the flag in order to foil Commie kids who thought they’d found a loophole. (We didn’t used to do the “hand on heart,” either. We used to do “The Bellamy Salute” but when that particular gesture became better known as “The Nazi Salute,” it began to seem a bit awkward and had to be dropped.)

I don’t know whether there have been periods where the school pledge-tradition has been observed to greater and lesser degrees. My friend Roger says that when he was in school in North Carolina in the ’60s and ’70s, the tradition had been all but scrapped, since the rebellious spirit of the times made it impossible to actually get kids to take it seriously. I don’t know whether Roger’s experience is representative, but I wonder if the transition from Vietnam-era cynicism to Reagan-era hyperpatriotism also brought the Pledge of Allegiance back into greater prominence. In 2016, a Salon writer said the Pledge in schools should be gotten rid of, because with the rise of Trump, “a daily loyalty oath has become a toxic, nationalistic ritual.” I wouldn’t say that exactly. I’d say a daily loyalty oath has always been a toxic, nationalistic ritual, and that the very fact Americans think it’s fine shows just what a hypocritical bunch of B.S. all their talk about “individualism” and liberty is. Samuel Miller-McDonald pointed out recently in Current Affairs that American capitalist culture is actually highly collectivist, rewarding those who serve the company and the nation and punishing independent spirits and dissidents. It’s the land of the corporate team-building exercise, where kneeling during our insipid national anthem can create a national scandal. Doing the Pledge of Allegiance in school is just training for doing the Walmart Cheer after graduation. (Both of these, by the way, are not that important by themselves, and I think the culture they spring from is far more of a problem than these minor but striking manifestations of it.)

But just as I wouldn’t mind standing for the National Anthem if it were Lift Every Voice And Sing (A.K.A. the Black National Anthem) rather than the Star-Spangled Banner, I might be okay with the Pledge if it were a little more accurate. My friend Chao has come up with an alternative that seems to capture the spirit of the times a little more fairly:

I pledge allegiance to the Imperial Standard,
Of the United States of America, Incorporated.
And to the Plutocracy for which it stands,
One Evil Empire, under Trump,
Incomprehensible,
With family separation and concentration camps for kids.

On second thought, how about no pledges? How about consigning daily loyalty affirmations to the dustbin of history? I realize that there are bigger problems in the world, and I’m not going to make “Abolish the Pledge of Allegiance” a central part of any political platform. Kids don’t even think twice about it (although that might actually be the problem). But I think it’s worth occasionally standing back and noticing just how absurd it is that we still inflict this only-in-America flag-worshiping nonsense on children every morning.