Fear of the “SJW” 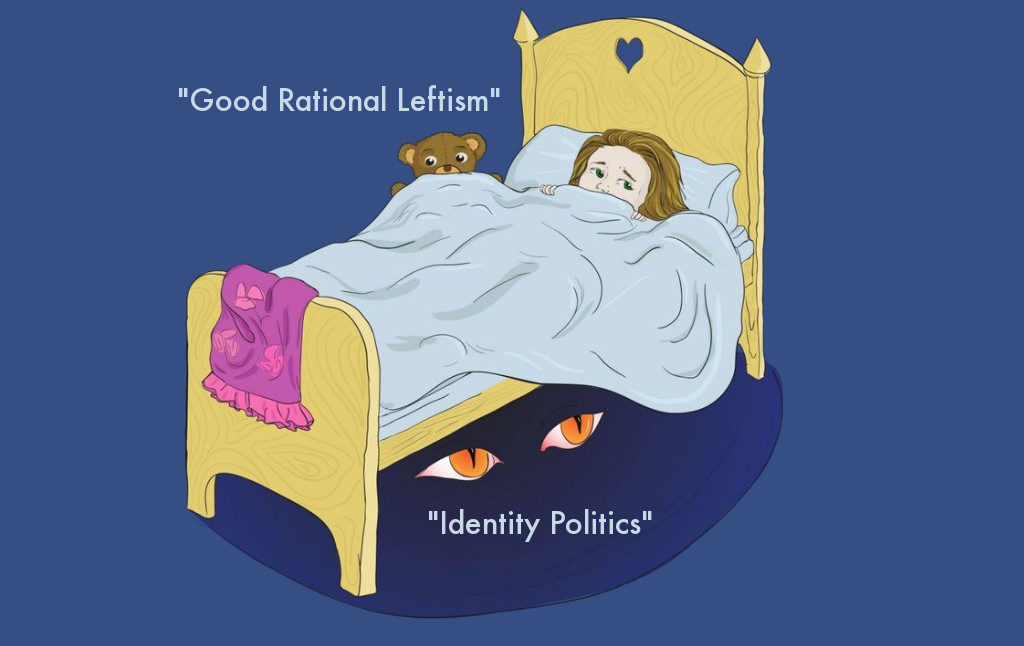 When I have written in defense of core social justice concepts, and critiqued conservative arguments, I have often gotten replies that go something like this:

I am a leftist, and I share your convictions. But you need to admit that “social justice warriors” are a real problem, and the left needs to get rid of this tendency. There is a brand of hysterical identity politics ruining the left, and until we are honest about it the right’s criticisms will continue to be valued. Until we distance ourselves from it, and purge “SJW”-ism from progressive politics, we will continue to play into the right’s hands. Why aren’t you spending your time criticizing the irrational parts of the left so that we can actually succeed politically?

In addition to letters like these, we sometimes get article submissions to Current Affairs making arguments like “The Left Has a SJW Problem” and “Saving The Left From Identity Politics.” Invariably, these submissions are from men, though I have no doubt that women do exist who would make the same claims.

I’d like to make a few points here in response. First, I know full well that there is a strain of leftism that operates on some extreme and untenable premises, especially around identity. For example, there is a belief that a person of a particular identity is necessarily an unquestioned authority on issues pertaining to that identity. I don’t think that principle can be held consistently, though, because of what we might call the “Sarah Palin problem”: If I can’t have an argument with Sarah Palin on what’s good for women, then left principles cease to exist and we must solely defer to the opinions of those with particular identities, even if those opinions are reactionary or bizarre. There’s a sensible compromise position here, though, which is that you should listen empathetically to people about what it’s like to be a member of their identity group, but identity is not a trump card that can override principled concerns.

There are plenty of other examples of untenable left ideas around identity. My colleague Briahna Joy Gray has explained why she doesn’t think the concept of “cultural appropriation” is useful, and that she thinks that instead of criticizing people for using somebody else’s culture, we should only ever criticize them if they disrespect a vulnerable culture or exploit an economically disadvantaged group’s culture for financial gain. Her criticisms of the “appropriation” idea seem valid to me.

Here’s another example of a tendency that makes me uncomfortable: excessively reinforcing racial identity, even among white people. I think “white privilege” is a meaningful and useful concept (though its levels vary), I think it’s valid for people to organize around issues relevant to their identity group, and I think that the United States has been “racialized” for so long that to simply pretend “not to see” race is intentional ignorance. However, affirmation of the importance of identity has reached some bizarre conclusions. For example, I was asked by a progressive friend if I wanted to join a whites-only group that was supposed to consist of white people helping other white people become less racist. This horrified me; the idea of an explicitly segregated white group is anathema to my humanist principles. (Plus, I think generally speaking white people already spend too much time around other white people, and the way for white people to become less racist is not through more time in the company of other whites.) That seems to me to be a disastrous direction for progressivism to go, and the more racial identity is affirmed in its importance, the more people will feel separated by a racial divide, and the more uncomfortable interactions between people of different races will become. I do want to be able to relate to people as human beings, rather than simply have them flattened into their group membership, and certain strands of left-wing thinking can “reduce” people in ways that I think are antithetical to the appreciation of our full diverse individuality. (Yet I understand that there’s a paradox here: How can you simultaneously elevate and diminish the importance of race? I don’t think anybody quite knows the answer to this.)

And yes, it’s true that there are practices that seem socially “toxic.” I generally think that when people make mistakes or do insensitive things, we should help them compassionately rather than denouncing them. For example, when the philosopher Rebecca Tuvel wrote an article in an academic argument arguing that being “trans-racial” was in principle equivalent to being “transgender,” she was accused by fellow academics of having engaged in offensive “epistemic violence.” Hundreds of scholars signed a petition demanding the article’s retraction and accusing Tuvel of transphobia. I don’t think this is a useful way to engage in criticism, and even on the assumption that Tuvel had written something ignorant or offensive, I believe that “good faith” disagreements that genuinely move understanding forward are better than attempts to make somebody a public pariah over a bad opinion. I wish there was more acknowledgment that we are all flawed, that we all struggle to articulate what we think, and that we’re going to step on each other’s toes sometimes and need to be merciful and forgiving. To me, kindness and support are core parts of what it means to be a leftist, and if we all end up feeling ashamed and horrible over ordinary human failings, the left is failing to “be the change it wishes to see in the world.”

Yet much as I might share my correspondents’ distaste for some trends in left discourse, I can’t share their notion that “we need to save progressivism from social justice warriors.” The very idea of the “social justice warrior” shows exactly the sort of tendency that supposedly we’re trying to exorcise: It’s a pejorative generalization that fails to see people in their full individuality. I don’t think it’s accurate, since people are more complex than a phrase like that indicates, and I don’t think it’s productive, since using this kind of terminology causes people to become defensive and doesn’t move discussion forward.

When it comes to Trump supporters, I have always advocated that the left take as understanding an attitude as possible, for the same reason I want people to empathize with prisoners. I don’t like it when we call them ignorant, privileged, racist, xenophobes. I think we should try to understand the roots of people’s thinking, even if we find them appalling. How, then, could I possibly agree with the people who encourage me to treat “social justice warriors” as hysterical, irrational, identitarian lunatics? Empathy must be applied consistently, and no matter how noxious I might find certain aspects of “call-out culture,” I realize that it is neither useful nor fair to refuse to extend to left comrades what I’d like left comrades to offer their enemies, and if you’re not just going to be another soldier in the left’s “circular firing squad,” you can’t respond to those who bitterly denounce people with yet more denunciations.

My suspicion is actually that many of the tendencies dismissed as “identitarian” and “social justice warrior-ish” would be diminished if critics were more sensitive. Today, a correspondent asked me why I picked on Jordan Peterson instead of attacking the “culture war idiocy” on the left. Well, partly I do that because, as I have explained, I think there’s more validity to the one perspective than the other, and the “social justice warriors” don’t have the same public prominence. (Again, try naming some with anything like the public prominence of the “intellectual dark web.”) But I also know that denouncing “culture war idiocy” is going to feed a fairly predictable reaction cycle. If I call people idiots who won’t listen to reason, how likely are they to want to engage me in reasoned discourse? I honestly do think this is a tendency that men often have, which is to say things that are obviously going to cause an emotional reaction, and then say “See, look how emotional you are, why can’t you respond with logic?” Charles Murray, for instance, should have known exactly what he would get when he wrote a book making arguments about racial intellectual inferiority in a country with a hideous history of racial dehumanization. But instead of trying to understand where his critics were coming from, he simply assumed that they could not handle his ideas. Same with James Damore: There were many ways he could have written his memo that would have been more empathetic to the feelings of his colleagues. But instead, he adopted a “fuck your feelings” mindset and was deliberately provocative.

I don’t think ignoring people’s feelings makes you more “rational.” I think it just makes you an asshole. And when I critique the left, as I often do, for the many, many things people do that are exasperating, I’m going to try to do so in a way that listens to and incorporates their concerns, rather than telling them they’re a bunch of SJW snowflakes who can’t handle the facts. It’s the approach required of a decent human being who cares about trying to resolve disagreements rather than further alienate people. But it’s also the approach required of anyone who is sincerely committed to reason, and who thinks that dialogue should actually lead somewhere instead of collapsing into mutual hostility, hatred, and accusation.