Service With A Smile 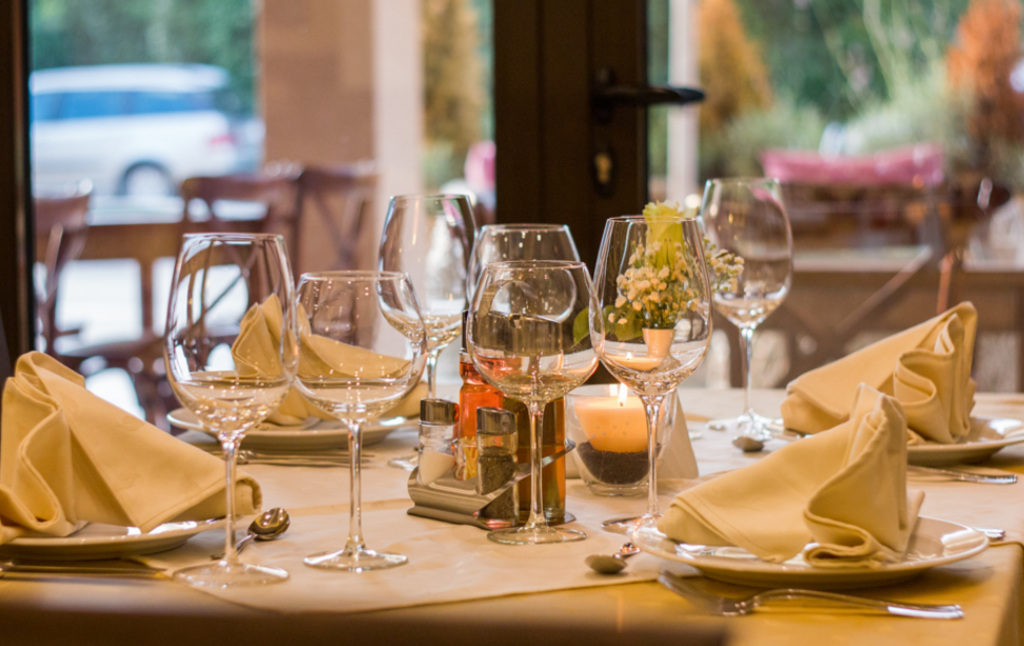 I have always been uncomfortable in restaurants. I don’t like them. There’s something about being served that feels instinctively wrong. Why should I sit there doing nothing while somebody makes my dinner and brings it to me? Why should they have to clear my plate away? Shouldn’t I contribute in some way? My server is a total stranger to me. It’s not like they invited me over for the pleasure of my company. Not only do they have to serve the whole meal, but they don’t even get to sit and eat it with me. This doesn’t feel like the way meals would be conducted in a healthy society. At least let me wipe the table down afterwards.

I feel a little crazy, because announcing that you are opposed to restaurants is like announcing that you’re opposed to sidewalks or potato peelers. They’re just such an unobjectionable commonplace that it seems absurd to even have a value judgment about them one way or the other. But then every time I eat out, I have an experience like I did the other night. I was sitting in a mid-priced Italian cafe, awaiting the delivery of what turned out to be a very tasty eggplant parmesan, when I noticed that the businessmen next to me were being rude. They were absorbed in a profanity-laden conversation about how much money you could make by renting out space in particular kinds of warehouses. They weren’t speaking too loud, and I don’t mind it when people swear, even about warehouses. But after a while I noticed something: they were totally ignoring their servers when the servers refilled their drinks and replenished their bread. It wasn’t just that they didn’t say “Oh, thank you.” They didn’t even look up or nod slightly. It was as if a human being wasn’t even there, as if the water was refilling itself. Then, when one of them wanted another glass of wine, he barked at the nearest server: “Miss: Get me a glass of the [insert name of Tuscan wine that I didn’t catch].” No “please.” Not so much as a “could you get me.” Just an order. (And, of course, when she brought the wine, he not only didn’t say “thank you,” but didn’t even furnish her with an appreciative glance.)

As far as rudeness goes, this was all fairly mild. At no point did the warehouse magnates insult the serving staff, or complain, or say anything actually inappropriate. They were easy patrons to attend to, with little fuss or hassle. What I found disturbing, though, was just how casually they disregarded the basic norms of respect and acknowledgment that I think of as being owed to all human persons. It wasn’t that the offense was particularly egregious in its degree, but that I feel repulsed at any interaction where one human treats another as a contraption rather than a conscious being.

There is something about the nature of the relationship between server and served that just doesn’t sit well with me. I recently read a passage by G.A. Cohen pointing out that one essential difference between “liberalism” and socialism is that while liberalism speaks in terms of equality before the law, socialism believes that human beings should relate to one another socially as equals, which necessarily entails a kind of equality-in-everyday-life. For the socialist, it’s not enough that people are equal “in the eyes of God” or at the ballot box. In fact, for most socialists, it wouldn’t even be enough for everyone to have equal amounts of material possessions. There also needs to be a kind of interpersonal equality in which people feel like each other’s comrades, or at least recognize each other’s common humanity. Interactions in which someone imperiously bullies a subordinate, or views them solely in terms of their utility, offend the underlying spirit of socialism, which is not just about apportioning society’s goods fairly but about making it feel like we actually do live in a society to begin with.

Being served by people violates this spirit. In every restaurant, except a buffet (and I am not pro-buffet), I feel like an aristocrat who pays someone to put on his clothes for him. I know I can supposedly mitigate this by being polite and tipping well. But it’s the whole concept of paying someone to feed me that I don’t like. Yes, obviously, it’s better if I pay someone well than if I pay them badly, and better to be appreciative than abusive. It doesn’t make any more of a difference to my gut reaction, though, any more than it would if I found out that the millionaire who pays a valet to tie his cravats for him is extremely generous in compensating said valet.

Partly, I think this is thanks to the knowledge that people work service jobs out of necessity, and many service jobs suck no matter how pleasant the customers may be. If the problem is with the way the work is structured (long hours doing menial tasks making money for imbecilic rich people) then individual patrons only matter a certain amount. The amusingly scathing anarchist pamphlet “Abolish Restaurants” takes the position that restaurant work is miserable by default and by design. It quotes George Orwell’s observation that we seldom seem to think about why it’s necessary for some people to spend their lives in scorchingly hot rooms getting other people’s dinner for them:

“When one comes to think of it, it is strange that thousands of people in a great modern city should spend their waking hours swabbing dishes in hot dens underground. The question I am raising is why this life goes on–what purpose it serves, and who wants it to continue…”

“Abolish Restaurants” takes the position that restaurants are inherently brutal, and that we should imagine what a world without them would look like. One reason for this is that even when patrons are inoffensive, they still hold power over restaurant workers in an unjust way:

Customers have a lot of power over the restaurant workers–and not just when they tip us. A bad comment card can get us yelled at. A serious complaint to the manager could get us fired. The imbalance of power is such that customers sometimes act like little bosses. They can be demanding, rude, drunken assholes, but we have to be nice to them, and it’s our job to make them happy.

The pamphlet itself is deeply bitter, and I’d like to think justice didn’t demand a world without restaurants, because that seems like it would inevitably result in a more bland and tedious human experience. (I’ve even previously proposed introducing new kinds of restaurants.) I do think the question is important, though: what would a fair relationship between the person eating and the person making and serving the food look like? The first thing I think we have to agree is that as long as the person serving is doing so only because it’s the work that is available to them, rather than because it’s the work they’d like to do, we should be uncomfortable. Second, of course, everyone needs to be making good money and working reasonable hours and operating in clean and pleasant conditions. But then, of course, there’s that interpersonal aspect: customers should feel much more like visitors than customers, and they shouldn’t have any kind of actual power and should always be expected to behave well. To me, the fact that you can go to jail for possession of cocaine but not for being rude to a waiter is clear evidence of a warped set of social values.

It’s not clear whether being wealthy turns you into a sociopath, or whether sociopaths disproportionately pursue and amass wealth. But either way, wealthy people end up being more entitled, more unscrupulous, and less charitable than non-wealthy people. I wouldn’t blame restaurants for that. But they’re often one of the arenas in which divisions of social class are most visibly acted out. Just read through all the horror stories from servers in the special dedicated Reddit forum. Restaurants are places in which one rents a servant for an hour, and as a result, all of the human viciousness that comes. Frederick Douglass observed that the master-slave relationship turned the slaveowners into worse people than they would otherwise have been. I am not comparing slavery and restaurants by invoking Douglass’s view. I’m just making the common observation that if you tell someone they’re the boss, they start acting like the boss. (See also the Stanford Prison Experiment.)

What I’d like, and I know it sounds impossible, is a world in which nobody has to sell their dignity in order to make a living. That means the end to Service With A Smile, to anyone having to be false to somebody else because that other person is in a superior social position. Everyone gets to define dignity for themselves, of course, and I don’t believe that anyone should be told that their work is degrading if they themselves don’t find it to be such. And it’s obviously a higher priority to ensure that people in the service industry receive higher wages than that they receive warm acknowledgments. But the task of egalitarians is not just to create formal equality, or even material equality. It is to have a society in which people are seen as people, and in which nobody exists merely to serve the whims of others.