Abuse By Bosses Comes In Many Forms 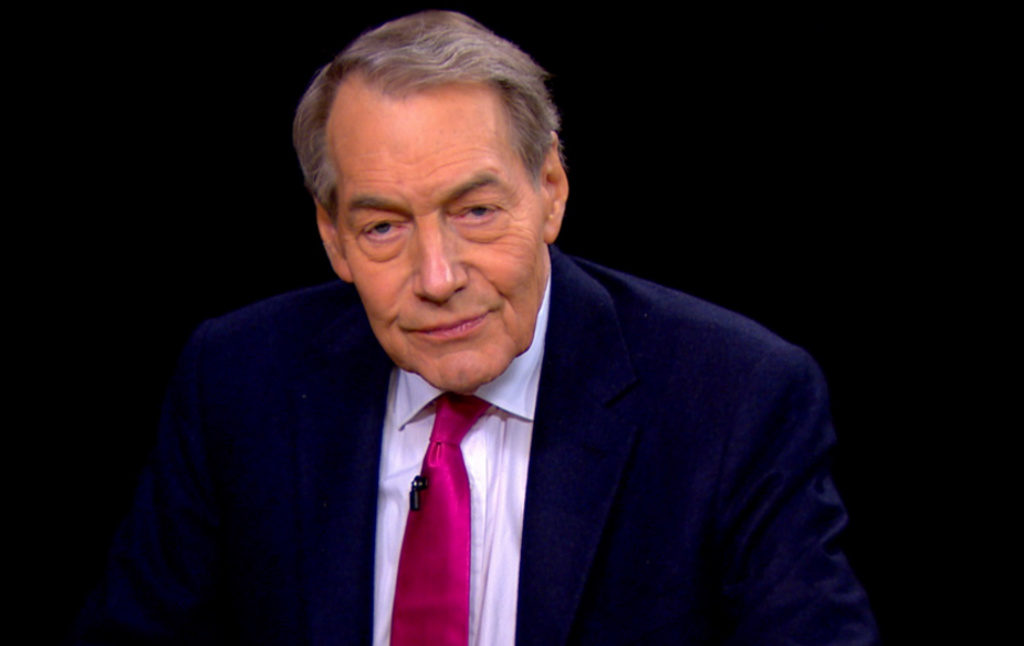 Harassment and abuse are not always sexual, and all psychological harms should be taken seriously…

Charlie Rose is the latest prominent man to face allegations of sexual misconduct. The fact pattern is wearyingly familiar: unwanted touching, lecherous comments, sudden disrobing. But I want to dwell on another aspect of Rose’s behavior: the acts of abuse that were non-sexual, that consisted of “mere” cruel and demeaning treatment. This broader category of abuse, which can be no less psychologically harmful, has not really had much of a place in the recent conversation around the treatment of women by powerful men. And yet it’s vitally important, because many people who have not experienced sexual abuse have still experienced other forms of abuse, and need to know that the injustices committed against them are no more justifiable.

Here’s an example of Rose’s treatment of a woman who worked for him, from the new Washington Post report:

On her first day on the job, Rose injured his foot. She tended to him as he recovered. But soon, Godfrey-Ryan said, he began yelling at her, calling her stupid and incompetent and pathetic. “He repeatedly attacked her in front of other people,” recalled a former producer who spoke on the condition of anonymity. “He once said that because she hadn’t gotten a college degree she would never amount to anything better than his secretary.” After the bouts of rage, Godfrey-Ryan said, Rose would often be conciliatory.

Rose said and did inappropriate sexual things toward Godfrey-Ryan, touching her and calling her late at night to ask who she was in bed with. (Then he fired her after finding out that she had told somebody.) These are the acts that have gotten him suspended from his job. But from the report, Rose also sounds like he was just an abusive boss generally. What kind of horrible person screams at his assistant and tells them they’re never going to amount to anything? This is the behavior of someone who relishes his power over others, and likes to make them feel small and pathetic. Sometimes that takes the form of sexual aggression, sometimes it takes the form of bullying and tormenting.

It’s striking to me just how easily this other form of abuse is tolerated. Even when people who worked with someone profess that they never knew about their sexual predations, many of them knew perfectly well about the other ways in which these men were cruel and manipulative. Consider Harvey Weinstein. I can believe that some of Weinstein’s employees had no idea that he was a rapist. After all, he went to absurd extremes to prevent anyone from finding out about his crimes. But every single one of them knew that he was a “horrible person.” Heck, there was a TV character based on him who does almost nothing but threaten and swear at people. This kind of conduct, though, can literally be practiced in public. It’s common to see bosses demeaning and hectoring their assistants, or making their subordinates cry.

But screaming at someone, telling them they’re worthless and incompetent, that they’re lucky to get to work for you, that’s… abuse. Sexual harassment is only one of the forms of workplace harassment. But you can make someone’s life hellish by taunting, bullying, and exploiting them, even if the actions never take on a sexual dimension. The long-term effects of verbal and emotional abuse can be just as traumatic for some people as sexual abuse is for others, because many of its dimensions are similar: a person is made to feel powerless, existing only to satisfy the ever-shifting demands of another person, and if they complain they’re crazy or ungrateful.

There is a common denominator here: power. Exerting power over others, making them live their lives according to your desires rather than their own, is wrong, whether that takes the form of coercing them into sex acts or having them wait on you hand and foot while you belittle them and make them feel bad about themselves. But even if there is a growing recognition that the use of power for sexual ends is wrong, the existence of massive power imbalances generally is far more accepted. Notably, many people seem to accept that “genius men” are allowed to be complete assholes, because their genius frees them from the having to obey ordinary moral imperatives. “A man must be a very great genius to make up for being such a loathsome human being,” Martha Gellhorn said of her partner Ernest Hemingway. But the real rule we should adopt is that no amount of genius can make up for being loathsome. You can only make up for it in one way, which is by becoming less loathsome.

It’s important to have a wider conversation about the effects of all kinds of power imbalances in people’s lives. The fact that low-wage employees are often dependent on their jobs is one thing that facilitates workplace sexual abuse, because employers know that their workers need the work too much to risk losing it. Abi Wilkinson in The New Statesman has written about how few options women have in employment situations where the boss has the upper hand, and how this is a function of economic inequality. But it goes beyond sexual abuse: the power imbalance between employer and employee also allows for many other kinds of exploitation, all of which can make someone’s life miserable and difficult.

Just look at the epidemic of wage theft. A Reddit user recently compiled a striking chart showing just how much is stolen from working people per year via failure to pay minimum wage, withheld overtime pay, and rest break/off-the-clock violations: 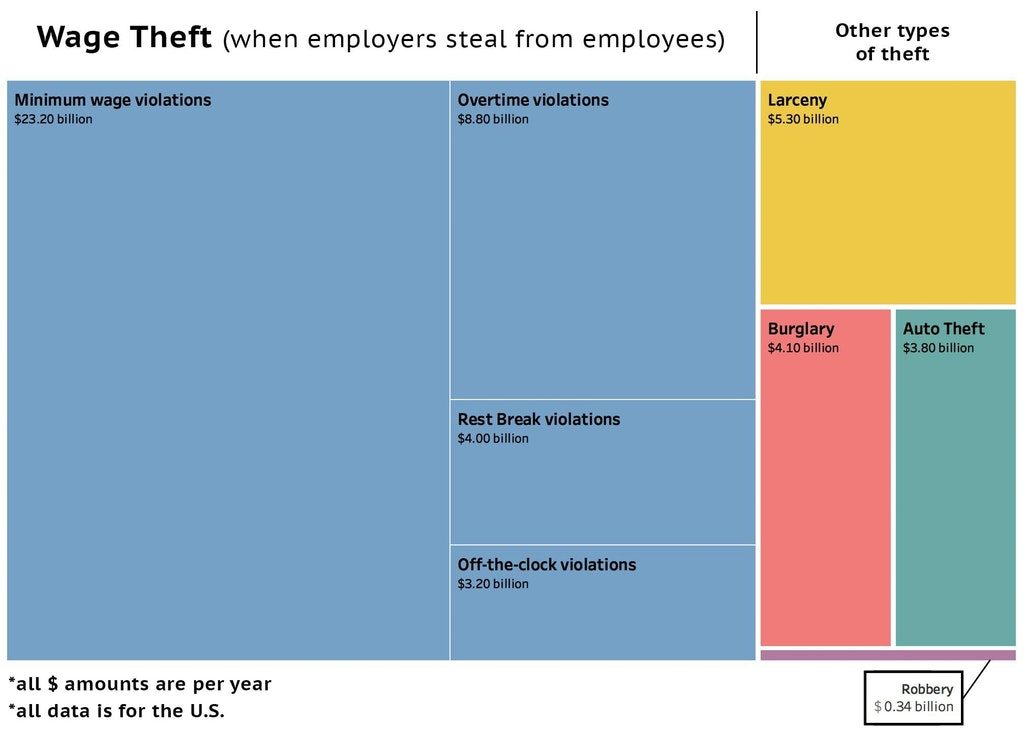 We can see from the data that the amount rich people steal from poor people dwarfs the amount poor people steal from rich people. And what’s important is that this is a function of power: if an employee has no recourse when they’re told they must come in and work overtime or lose their job, that’s because disproportionate amounts of power are held by workers relative to employers. If my boss spills his coffee on the floor and then demands I go and clean it up, even though that’s not my job, I am compelled to do it by the fact that he holds my livelihood in his hands.

I must be very careful here, because I need to be clear that I am not saying wage theft and sexual abuse are the same thing. There are qualitative differences between the various ways in which human beings hurt and deprive each other, and the psychological trauma caused by bodily violations rightly marks them as a distinct category. I am wary of attempts to put very different acts under the same rhetorical umbrella (see the Current Affairs critique of the expanding definition of “violence”). What I am saying is that power comes in many forms, and in all of its forms it is unjust, and that we should think about how to adjust power balances more broadly, so that we don’t end up curtailing one severe kind of misconduct while leaving many others unaddressed. We must ask serious questions like: “How can we make workplaces in which bosses can’t tyrannize over their employees?” “How can we make sure people aren’t coerced by economic necessity into doing things they don’t want to do?”

My suspicion is that a lot of this won’t be fixed unless the balance of money and status in society is shifted. The more economically secure someone is, the less they feel obligated to put up with abusive behavior in the workplace, because they can simply leave. And so much of the behavior we have heard about in recent weeks involves men who sensed weakness, who knew what they could get away with because they knew that they had control over a person’s career.

It is not enough, then, to keep the Charlie Roses of the world from sexually exploiting their employees. We have to keep them from exploiting their employees at all. There are no “acceptable” forms of psychological harm to inflict on another person, and the boss who regularly causes his assistant to end up crying alone in a storage room should be a public pariah as well. Cruelty in all its forms needs to be banished, and the conversation about abuse must not neglect the harms suffered by the victims of ongoing verbal and emotional assaults.