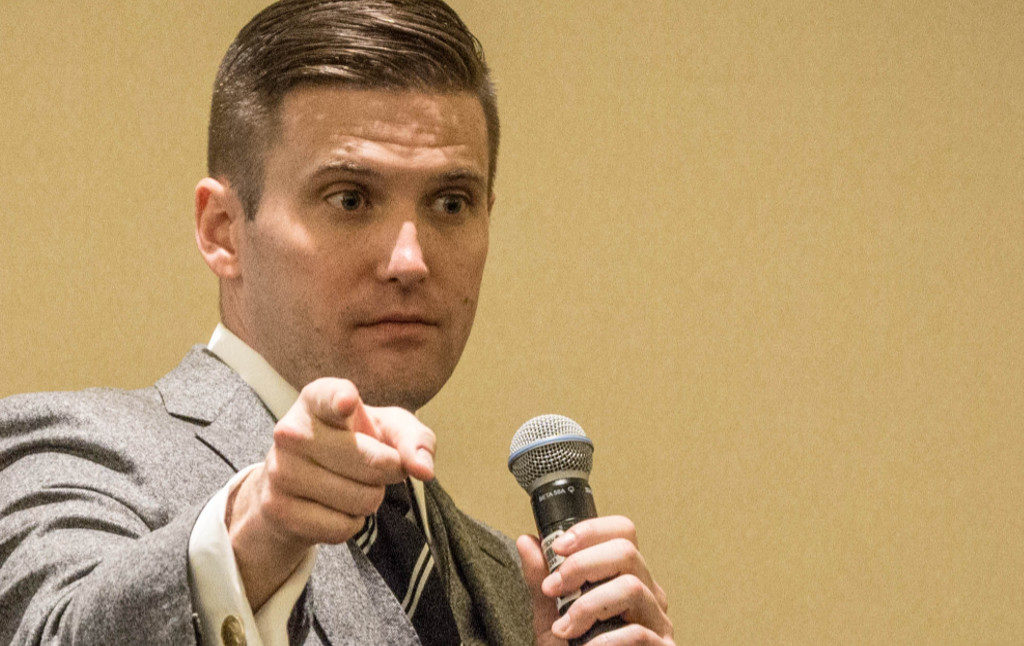 There are many bad ways to interview white nationalist Richard Spencer, if you absolutely feel you must do it. You could be like the Vice reporter who asked him whether “neckbeards were living vicariously through” him, or you could be like the Al Jazeera interviewer who seemed to be doing everything possible to make Spencer appear reasonable and mainstream. Journalists who talk to Spencer frequently don’t seem to have done much research on his rhetorical tactics, and therefore don’t come in knowing what his answers to their questions will be. (Any good lawyer knows you never ask the witness a question that you don’t know the answer to.) If you’re not prepared to counter his talking points, you’re going to be blindsided in a way that helps Spencer accomplish his public relations goals.

In particular, many come unprepared to deal with Spencer’s favorite argument: the Israel comparison. Spencer advocates the creation of a “white ethno-state,” which many people instinctively (and correctly) find appalling. Interviewers who focus on asking Spencer what such a state would mean in practice usually fare the best, since the more he is forced to explain what he’s actually advocating (as opposed to parrying taunts at his “neckbeard” followers or defending the case for free speech), the easier it is to show how loathsome Spencer’s beliefs are. The idea of an ethno-state is repugnant to the vast majority of people: they think about their friends and relatives of different races being rounded up and exiled, or worse, and they recoil in horror.

But even when the focus is kept where it should be, on Spencer’s nightmarish vision for an ethno-state, he has an effective counterargument prepared: “What about Israel?” Israel, he says, is an ethno-state for Jews, and Americans have no objection it. He just wants a homeland for his people the way they have a homeland for their people. Spencer recently tried this on The Guardian’s Gary Younge, who gave no response to the Israel comparison. And he used it to shut down a rabbi who challenged him, saying: “Do you really want radical inclusion into the State of Israel? And by that I mean radical inclusion. Maybe all of the Middle East could go move into Tel Aviv or Jerusalem. Would you really want that?” Spencer has even gone on Israeli television, and told the people of Israel that he is a “white Zionist” whose vision differs from their own only in the ethnic group it applies to:

“As an Israeli citizen, someone who understands your identity, who has a sense of nationhood and peoplehood and history and experience of the Jewish people, you should respect someone like me… I care about my people. I want us to have a secure homeland for us and ourselves, just like you want a secure homeland in Israel.”

Spencer has flummoxed multiple interlocutors with the comparison. You can’t object to the concept of an ethno-state if you support the State of Israel, he says. You’re just saying that some people deserve ethno-states while other don’t. It’s a deeply discomforting argument, as The Forward’s Naomi Dunn points out, because it expresses certain truths about Israel: it does openly discriminate on the basis of ethnicity, and there is a two-tiered citizenship structure. It’s impossible to argue that Palestinian residents in the occupied territories have any kind of equal status, and there are good reasons why the word Apartheid is deployed to describe the situation there. (Though a more important question than “In what ways is this analogous to South African Apartheid?” is “In what ways is this unjust?”)

It’s very easy, if you are a consistent opponent of ethno-nationalism, to counter Spencer’s challenge. When he says “What about Israel? That’s an ethno-state,” one obvious response is “Exactly, the unjust hierarchies in Israel show exactly why ethno-states are contrary to the principles of universal human dignity and equal participation in power.” Richard Spencer wouldn’t last 30 seconds in a debate with Noam Chomsky, who would just reply “Israel is a serial human rights violator that has codified bigotry. All you have proven with your comparison is that you support the violation of human rights.” But if you are a supporter of Israel—as the majority of Americans are—Spencer’s challenge is not nearly as easy to respond to. You have to get into the business of saying that it’s sometimes okay to have an ethno-state and sometimes not, and drawing distinctions between the good ones and the bad ones. That can be difficult.

Of course, there are many crucial distinctions between Israel and whatever Richard Spencer is advocating. (Though he clearly prefers not to have to be specific about what his ideal world would involve, since it would necessarily involve a totalitarian bureaucracy empowered to determine whether someone was sufficiently white for citizenship.) For one thing, the fact that Jews have been constantly persecuted for thousands of years, and had been massacred by the millions in the years immediately preceding the founding of the State of Israel, does suggest that if anyone deserves an exception to the general principle “there should be no ethnically-defined states,” it’s the Jewish people. Spencer says that he wants a “safe space” for his people, but, uh, there’s a pretty good reason that Jewish people might have a unique entitlement to a “safe space.” It’s far more understandable when historically subordinated groups exercise collective solidarity than when historically dominant groups do it. For another thing, while conversion to Judaism isn’t easy, it is possible, and it can be argued persuasively that Israel is requiring adherence to a religious identity rather than membership in an ethnic group, with beliefs mattering the most. Yet there’s still clearly an ethnic component, since if I can prove that my ancestors were Jews, I can gain Israeli citizenship, even if I have no religious beliefs whatsoever.

Spencer’s rhetorical move still puts a lot of people in a tough spot, though: why couldn’t the U.S. enclose and occupy its black population just as Israel has enclosed and occupied Palestine? The answer, for anyone who is consistent, is that neither should be able to do so, because all human beings are equal and no one group should be permitted to dominate another. But that judgment has implications for Israel that many Americans will be unwilling to endorse. (And not just Israel: many states are exclusionary, and if you’re going to defend them against Spencer you have to be prepared to draw distinctions between the good kind of exclusion and the bad kind.)

In fact, Richard Spencer often depends on using the language of “identity” to raise charges that those who criticize him are inconsistent and hypocritical. “If you support the right of Group X to self-determination on the basis of race, why not me too?” Now, you can answer that question as Gary Younge does, by pointing out that whenever white people have had an ethno-state, it has involved perpetrating atrocities against racial minorities. But leftists who are critical of the entire construct of race, viewing it as an arbitrary, hierarchical, and incoherent concept, don’t even need to criticize how the theory has been put into practice, because they see the theory itself as evil: they don’t want the world sorted into races, because the very notion of race is pernicious. That doesn’t mean they’re “race-blind”; they recognize that racial categories have social implications and that racial oppression is a serious problem. But they think that the long-term goal is to make that category less meaningful. If you are seeking a world in which racial identities are less rather than more salient, nobody will be faced with the question “Well, you elevate the importance of racial identity, why can’t I?”

Spencer says white nationalism is just “white Zionism”: the desire to be among your own and exclude other people. One way to condemn that is to say that Zionism is a different kind of nationalism from other nationalisms. But another is to criticize the very concept of nationalism, to advocate the elimination of racial and national divisions between humans, period.

There’s no need to engage Richard Spencer in any kind of discussion. He is a fringe figure, who has been elevated by the media, who insist on giving copious airtime to white supremacists on the theory that this is responsible and balanced journalism. But one of the most frustrating things about the press’s engagement with Spencer is that they don’t come prepared to deal with his talking points. When he says he wants an ethno-state, they do not probe him on what that would actually mean in practice, the mass deportation and the totalitarian state that would be necessary in order to make his dream a reality. And when he says he just wants to be like “Israel for white people,” they do not point out that this is actually a good reason to oppose his beliefs rather than support them.