Socialists Are Winning The Battle Of Ideas 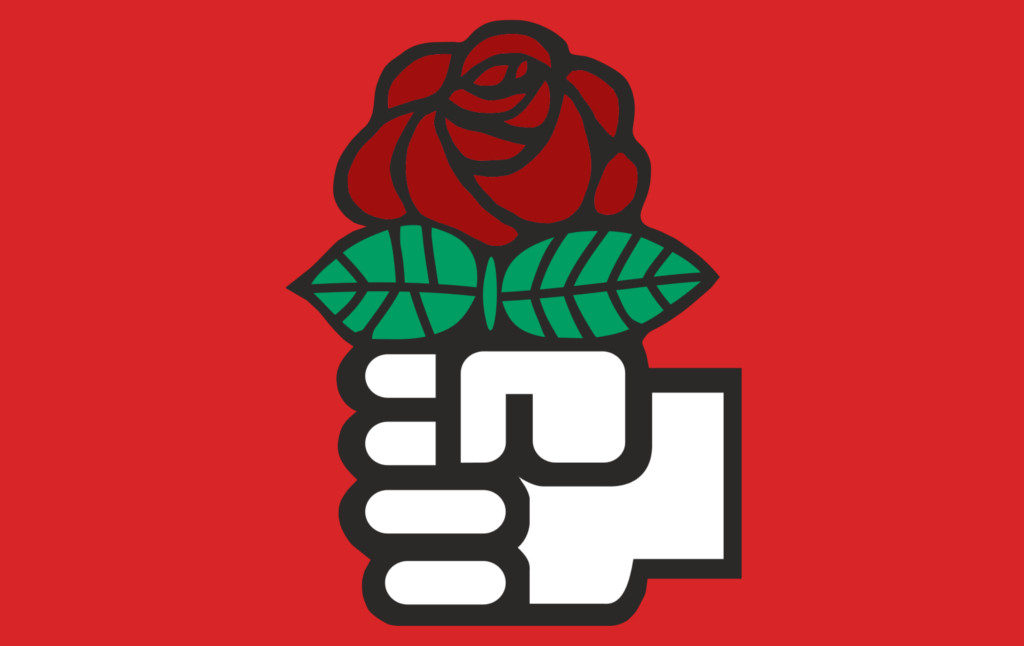 Young people are identifying as socialists, the right has nothing to offer beyond grievance and hate, and the left is actually putting forward serious ideas.

One of the most peculiar features of contemporary politics is how unwilling conservatives are to actually defend many of their core ideas and policies (to the extent that they actually have them). Take a look at the leading right-wing publications and you’ll notice something: there’s a lot of talk about Democratic hypocrisy and the Crazy Campus Left, but there isn’t much talk about conservatism. From Breitbart (“NBC Runs Heartwarming NFL Thanksgiving Commercial Featuring… Registered Sex Offender”) to the National Review (“Charles Manson’s Radical Chic”) to the Daily Wire, (“SJW Screams At Black Man Dressed As Peacock”), it’s little more than a litany of cultural grievances. Hardly anyone seems to want to be associated with the GOP’s policy plans, and when they do try to stick up for them publicly, the result is underwhelming. Ramesh Ponnuru notes that some conservative publications seem to be giving up on capitalism altogether.

I have no nostalgia for the conservatism of William F. Buckley, Allan Bloom, and Friedrich von Hayek. They did actually have an ideology, though, and defended it (“at least it’s an ethos”). By contrast, on the rare occasions when Steve Bannon actually tries to say what he believes, it’s an incoherent mess about Western Judeo-Christian-something-or-other, tied to no actual policies. Milo Yiannopoulos didn’t have “dangerous” ideas. He had no ideas: every chapter of his book is a variation on “Why [Group X] Hates Me,” his entire schtick was to provoke liberals rather than to clearly espouse whatever his vague Nazi-inspired beliefs actually were.

Bill Kristol, once one of the main “thinkers” in the conservative movement, doesn’t even have any idea what he believes anymore:

One of the problems is that the policies associated with the American right, if presented honestly, are unpopular with the American public. Most people believe the federal government should guarantee health care coverage, with a plurality supporting a single-payer system. I suspect the vast majority of people would be horrified by the consequences of pure free-market health care, in which people who couldn’t afford to spend huge chunks of their income on insurance would either have to put their faith in GoFundMe or die. Yet because the right is ideologically wedded to its belief in free markets, it was incapable of actually proposing any feasible alternative to ObamaCare. It had spent so long defining itself by its hatred of Barack Obama, it fell on its face the moment it was given the opportunity to actually implement something. Likewise, twice as many people want to see corporate taxes raised as want to see them lowered, but because the GOP has no ideas beyond “cut taxes and deregulate,” the only thing it can do is scream about SJWs and liberal hypocrisy while trying to ram through an incredibly unpopular set of “reforms.”

By contrast, parts of today’s left are vibrant and intellectually exciting. It’s a great time to be a socialist, social democrat, or progressive, because these are the groups producing actual serious thoughts on how to solve social problems. This is not as obvious as it should be, partly because many prominent members of the Democratic Party has spent the past two years criticizing Donald Trump rather than putting forward their alternative plans. But that’s strange, because they do actually have positive ideas. Have a look at the Democratic Party Platform. Hillary Clinton’s campaign didn’t talk about it very much, perhaps because it’s a strongly Sanders-influenced document, but it’s actually impressive. It goes through every area of policy and explains what the problems are, and what the Democrats intend to do about them. It’s not a list of complaints about Republicans. It’s a set of clear, though simplified, policy priorities, on how to fix the financial industry, campaign finance, education, health care, and civil rights. I don’t agree with all of it (it contains a totally unnecessary disavowal of the Boycott, Divest, and Sanctions movement). But thanks to the left wing of the Democratic Party, and the success of the Sanders campaign in drawing attention to the actual issues that affect people’s lives the most, it’s the sort of serious statement of priorities that a party ought to have. (Now, if we could only get all Democrats to talk about the platform as much as they talk about Russia…)

There’s a very similar contrast in U.K. politics right now. Labour under Jeremy Corbyn has done unexpectedly well in large part because it has adopted a clear combination of values, vision, and strategy. The most important moment in the last British election was the release of Labour’s policy manifesto, which was widely praised for its specificity: Labour said how many new affordable houses they planned to build, how they planned to allocate new funding for education, what new regulations they would introduce on employment contracts, and how they intended to pay for all of it. By contrast, the Conservative manifesto immediately proved so unpopular that parts of it had to be dropped and the party has no real suggestions for how it intends to improve the lives of the young people who have been flocking to Corbyn’s Labour.

It’s an encouraging time to be a socialist in America. The majority of millennials are skeptical of capitalism and have warm feelings toward socialism and social democracy. The stigma of the word “socialism” is evaporating. The reasons for this are fairly obvious: it’s hard not to laugh at paeans to The Free Market And Our Great American Democracy when the free market siphons every penny they earn, and the “representative democracy” is not actually representative or democratic. If the right could explain to millennials how their beliefs would improve our lives, how they planned to generate economic growth without the benefits of that growth accruing to the already-extremely-rich, young people might not feel so sour toward capitalism. But since they can’t offer such a plan, or at least on that isn’t absurd on its face, the left looks more and more attractive.

That’s partly because on our side, there are plenty of people who are offering ideas. Independent left media outlets like Jacobin are explaining clearly what the left stands for, how particular plans would work, and what the strategy is for achieving them. The People’s Policy Project is offering clear explanations of why economic injustice occurs, thinking through bold new ideas about how to give workers a greater say in how their companies are run, or responding clearly and carefully to criticisms of single-payer healthcare, and then examining ways to actually bring these changes about. Black Lives Matter released an incredibly detailed and practical policy agenda, full of suggestions for real reforms that would address the hideous unfairness of the criminal justice system. Ideas for what to do are flourishing on the left, whether it’s proposals for a basic income, Richard Wolff’s idea of Worker Self-Directed Enterprises, Jane McAlevey’s strategies for how to build an effective labor movement, Naomi Klein’s suggestions for a proactive and powerful resistance to the Trump agenda, or the radical ideas collected by Sarah Leonard and Bhaskar Sunkara in The Future We Want.

On the ground, things are encouraging, too. Radical candidates are doing unexpectedly well in ways that would have been inconceivable a few years ago. It’s no longer considered fantastical to think that Jeremy Corbyn might one day be the U.K. Prime Minister, or that Bernie would have won. Membership in the Democratic Socialists of America has taken off, and independent left media outlets are growing their audiences. (Although in order to remain viable, they depend on your support.)

Of course, radical free-market conservatives still hold national political power, and for all Donald Trump’s bluster and ineptitude, he is doing an excellent job gutting the regulatory state and installing radically partisan federal judges. But battles of ideas matter a lot: persuading people to believe in your politics is a prerequisite to getting them to actually support you, and we can see far more left-wing beliefs suddenly becoming “mainstream.” More and more doctors are supporting single payer, which has gone from “fringe fantasy” to “serious policy proposal” incredibly quickly. (This is, by the way, why you always need to set your sights high rather than low. I totally disagree with the Hillary Clinton position that it’s “pragmatic” to aim for moderation: you aim for radical change, and settle temporarily for moderation. If you aim for moderation, you will end up settling for nothing.)

I don’t believe anyone who says that conservatism is on the retreat, or that Trump and the Republicans are floundering and 2018 will be an easy victory for Democrats. Overly optimistic predictions had devastating consequences last November, and how the left does electorally will depend on what the left does to convince people to vote for its candidates. But one thing does seem clear: there is something strange happening among conservatives. Even as they are more radical than ever in certain ways, there seems almost a half-heartedness among many conservative intellectuals. Before the financial crisis, it would have seemed inconceivable that Richard Posner would end up writing a book on the failures of capitalism. Before Bernie Sanders, it was inconceivable that an open socialist could come reasonably close to winning a major-party primary, and that even some Republican voters would find themselves rooting for him. When Bill Kristol is talking about his inner socialist, and the National Review is conceding that hardly any conservatives actually truly endorse free-market economics, the intellectual landscape is shifting. The conservative counterarguments to the left critiques seem increasingly flimsy and superficial: to the extent they try at all anymore, the sole tactic consists of invoking the specter of the Soviet Union, persuades hardly anybody, since most are capable of realizing the difference between guaranteed healthcare and Stalinism.

Ideas mean very little unless they are translated into political power. But it’s important to notice changes in the ideological landscape. The American right no longer has plausible-sounding answers to the serious questions people need answers to. So it barely even tries. (Again, read the leading right-wing websites and see for yourself.) Socialists, on the other hand, are having what Ross Douthat called in 2014 a “miniature intellectual renaissance.” Douthat thought the intellectual popularity wouldn’t translate into political popularity, because ordinary people weren’t as upset and frustrated as socialism presumed them to be. 2016 blew a great big hole in that theory. The left is doing well, because millennials are tired of life in the “gig economy.” Young women preferred Bernie Sanders to Hillary Clinton by a stunning 37 percentage points. Our ideas are doing well, and with the right incapable of offering alternatives, we’ll only grow further.