Good Riddance to a Revolting Monster 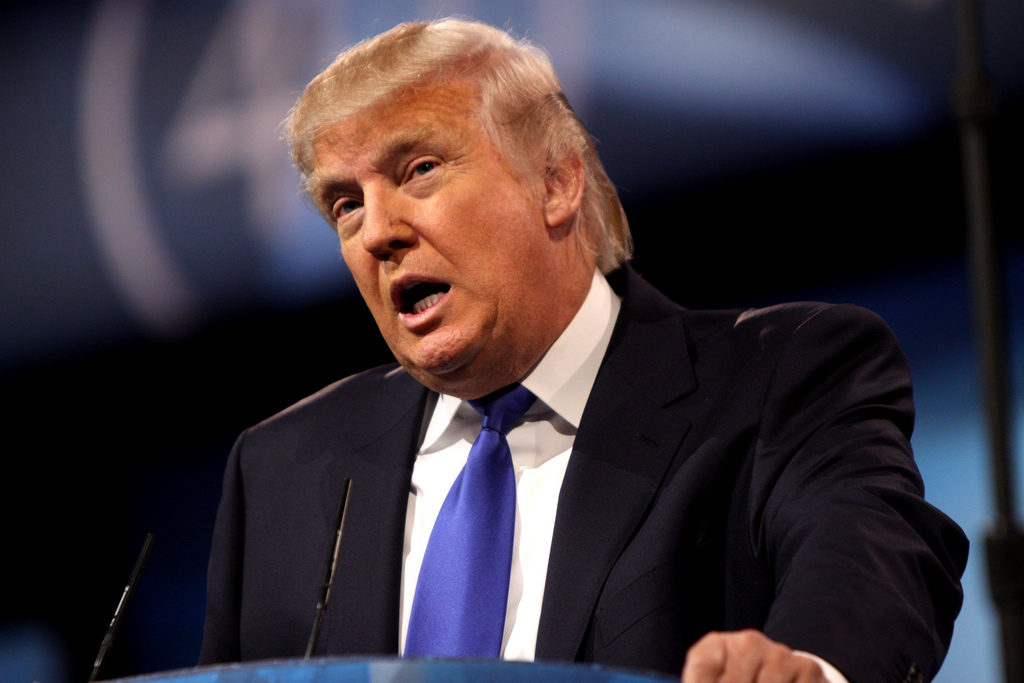 One of the most horrible people on earth committed serial sexual assault. Can we at last be rid of him forever?

It is always unwise to be complacent, especially when it comes to Donald Trump. A hundred scandals that would destroy an ordinary man have failed to undo him. But with Trump having now proudly admitted to groping multiple women (you “grab them by the pussy”), and his behavior graphically confirmed by a victim, perhaps it will at last be possible to declare truthfully (instead of wishfully) that Trump’s campaign is over. Our long national nightmare may finally be at an end.

Again, caution is warranted. Like shell-shocked townspeople emerging from a bomb shelter, we should make sure the threat is truly vanquished before celebrating. But something feels qualitatively different about this most recent Trump scandal. Trump’s racism, militarism, and misogyny were on open display before. But electing racists is certainly not without precedent in United States presidential history, and threatening to bomb helpless non-white people if elected is almost a job requirement. Handing the presidency to a man who openly brags of committing serial sexual assault, however, would be a dramatic new kind of low.

What makes this scandal seem different is the tone of the revulsion among Republicans. Paul Ryan was “sickened” by Trump’s remarks and Mitch McConnell found the revelation “repugnant.” Hardly anyone appears to be defending the so-called “lewd” remarks. Even Trump seems to have little to say in his own defense, other than to claim that he has heard Bill Clinton say far worse on the golf course. (Of this, I have no doubt. But anyone using the Bill Clinton Scale of sexual morality is in deep trouble indeed.)

Of course, the fact that Republicans chose this particular moment to disembark from the Trump train shows just how great the party’s tolerance for human evil is. One almost suspects that the outrage had more to do with Trump’s on-tape use of the words “pussy” and “fuck” than with the actual substance of the admission. It has always been Trump’s lewdness and vulgarity, rather than, say, his willingness to deport and massacre large numbers of people, that has most unsettled the conservative conscience. (And the misclassification of the groping comments as “lewd” rather than “predatory” downplays the seriousness of their contents.) Anyone who cared about Trump’s actual harm to humans would never have gotten on board with him in the first place. This is a man who tried to get five innocent black men executed, on the grounds that “hate is what we need.” He is a man who has been making white supremacism acceptable again. (That must be the subtext of those red hats, since I can’t remember a time when America was “great,” but I can certainly remember a time when it lynched people.) From the moment he entered the presidential race, he has embraced the most repellent, violent, and destructive tendencies in American politics. Anyone who stood by him until the groping confession must have been fine with the white supremacy.

As Republicans flee Trump, then, it should be remembered that Trump was only an especially unpleasant manifestation of beliefs they all hold. There is a risk that Trump’s spectacular implosion will make ordinary, “sensible” conservatism look comparatively innocuous and redeemable. But it isn’t. George W. Bush’s Iraq bloodbath cost hundreds of thousands of civilian lives. He should not be receiving little embraces from Michelle Obama, and yet he is. Ted Cruz may have even more malignant and warlike beliefs than Trump, yet Cruz retains his respectability and will almost certainly try for the presidency again. Trump is but a symptom of the disease that is right-wing politics.

It is worth reflecting on Trump’s admission that he could get away with aggressive crotch-grabbing because of his fame. Just as nobody should buy the idea that Trump has uniquely horrendous politics, nobody should treat his sexual assaults as some kind of aberration. Trump was right that this privilege seems to come along with being famous. The exposure of Bill Cosby and Roger Ailes, who spent decades getting away with sexually abusing women while maintaining positions of wealth and power, shows just how extraordinary the impunity is.

Not nearly enough attention is paid to the way that fame and wealth allow men to commit acts of serial abuse without consequence. Billionaire financier Jeffrey Epstein (friend to both Bill Clinton and Donald Trump alike) likely committed sex crimes against scores of underage girls, yet was able to use wealth and influence to negotiate a non-prosecution agreement in exchange for a nominal 13-month jail sentence (in which he would report to jail only at night). In Britain, beloved television star Jimmy Savile (who socialized with monarchs, prime ministers, and popes, and received a knighthood among countless other awards) was exposed after his death as having raped or molested at least 500 young girls. Plenty of people around Savile knew about this behavior; Savile boasted in his autobiography of talking police and parents out of pursuing charges against him. Yet fame allowed him to do whatever he pleased.

Thanks to the multi-decade efforts of feminists, this kind of culture of abuse is hopefully abating, even though rape and assault remain horrifyingly common experiences for women and are rarely punished. Savile, Cosby, and Ailes finally had their reputations ruined, though not until far too late. In terms of tolerance for male sexual misconduct, there is a noticeable difference between the present day and the 90’s. It is implausible that a sexual harasser like Clarence Thomas would make it onto the Supreme Court today, and unlikely that Monica Lewinsky would have been left to fend for herself against a grotesquely sexist press. (The need to put Hillary Clinton in the White House has caused an uncomfortable silence around the rape allegation against Bill Clinton, but perhaps that, too, will have its time.) Perhaps, God willing, the “old boys club” may finally be disintegrating. If a Hillary Clinton presidency can drive another nail into its coffin, her term will have been worth something.

At Current Affairs, we have generally tried to refrain from writing too much about Donald Trump. This is, frankly, because we do not enjoy the feeling of thinking about him. Every moment of my life that is occupied by contemplating Trump is a moment that I do not wish I was living. We also believed that since Trump thrived on attention, it was best to pay him as little attention as possible. Writing articles condemning him as a bigot and a rube seemed only to make him stronger. Whenever we did write an article ostensibly about Trump, it was usually actually about something else (like civilian deaths in Syria).

I have spent months desperately wishing that Trump would somehow destroy himself. A self-inflicted wound seemed the only hope; the Clinton campaign is highly ineffective, and is stuck with one of the world’s most flawed candidates. I believed very strongly (and still do) that the Trump threat was nothing to laugh at; Trump could easily have become president if he had managed to show even minor strategic restraint. Fortunately, Trump is a child, and was incapable of capitalizing upon the opportunity that had been handed to him.

Presuming Trump’s already-drooping chances are indeed ruined by the sexual assault scandal, everyone can breathe freely for a moment. Leftists can also stop giving in to the Democratic insistence that all criticism of Hillary Clinton provides aid and comfort to the enemy. That’s a relief, because there are a lot of aspects of the Democratic Party that need to be vigorously rejected and excised. Parts of Clinton’s infamous remarks to Goldman Sachs have just been released (how fortunate she is that the grope-tape emerged at the precise same moment), and they confirm that Clintonian politics is just as elitist and oligarchical as we believed, and that Clinton herself is just as slippery as her critics knew her to be. (She has a “public and private position” on issues, i.e. lies to the public while telling bankers what she really believes, and shares the insane Wall Street delusion that successful people are unfairly persecuted and demonized in America.) And since Trump is a groper who will not be president, there is no reason not to point these facts out.

Trump will be back. Not the man himself, perhaps, but the dark and menacing tendencies he represents. Democrats failed to appreciate how serious the situation was, believing they could laugh him off as “Drumpf” and mock his supporters as hicks. Next time, they need to have a plan, and a candidate who isn’t widely hated and mistrusted. In 1928, the Brownshirts looked silly parading down German streets. By 1933, the joke wasn’t very funny anymore. A serious left alternative, one with a platform beyond “We’re not them,” needs to be readied. The next monster may be even deadlier.