The Pro-War Assumptions In Your Newspaper 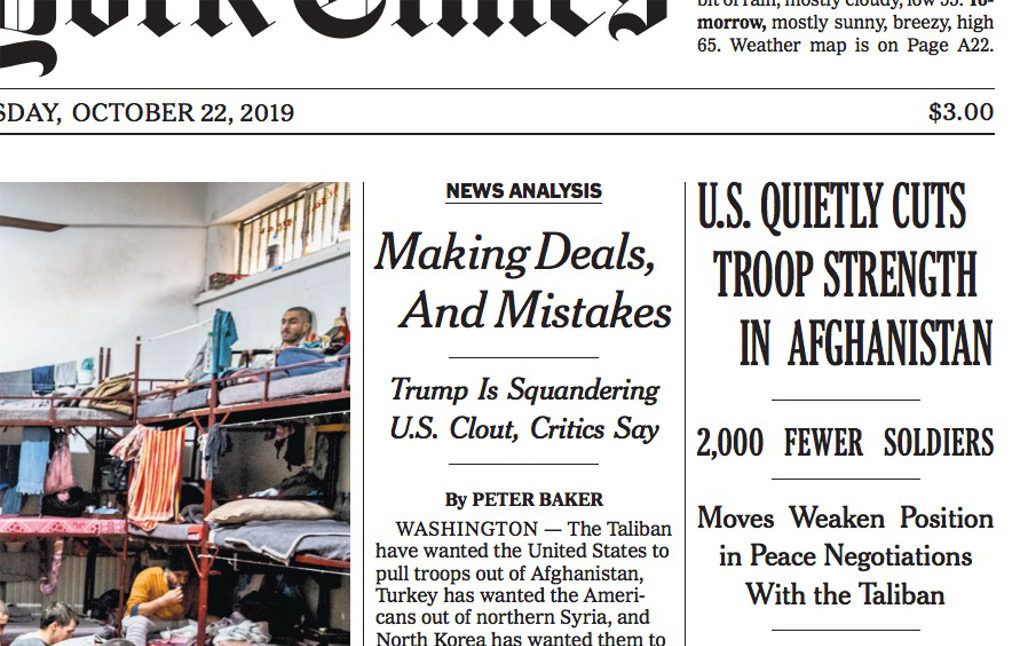 Anything that reduces our power is bad, U.S. empire must be preserved…

If you want to know why America’s giant military apparatus seems never to shrink and our wars never seem to end, you’ll find a big clue on the front page of yesterday’s New York Times. A “news analysis” piece (which as far as I can tell is just a label they sometimes slap on articles to justify lowering the required standard of objectivity) by Peter Baker, called “Making Deals, And Mistakes” (in its print headline) and “Troop Pullouts Without Much In Return” (online) discusses Trump’s withdrawal of U.S. soldiers from some parts of the world. The article’s thrust is that Trump is behaving irresponsibly, because he is harming U.S. interests and not securing “concessions” in exchange for withdrawals. I will present you with an excerpt:

The Taliban have wanted the United States to pull troops out of Afghanistan, Turkey has wanted the Americans out of northern Syria and North Korea has wanted them to at least stop military exercises with South Korea. President Trump has now to some extent at least obliged all three — but without getting much of anything in return. The self-styled dealmaker has given up the leverage of the United States’ military presence in multiple places around the world without negotiating concessions from those cheering for American forces to leave. For a president who has repeatedly promised to get America out of foreign wars, the decisions reflect a broader conviction that bringing troops home — or at least moving them out of hot spots — is more important than haggling for advantage. In his view, decades of overseas military adventurism has only cost the country enormous blood and treasure, and waiting for deals would prolong a national disaster. But veteran diplomats, foreign policy experts and key lawmakers fear that Mr. Trump is squandering American power and influence in the world with little to show for it. By pulling troops out unilaterally, they argue, Mr. Trump has emboldened America’s enemies and distressed its allies. Friends like Israel, they note, worry about American staying power. Foes like North Korea and the Taliban learn that they can achieve their goals without having to pay a price.“It’s hard for me to divine any real strategic logic to the president’s moves,” said John P. Hannah, a senior counselor at the Foundation for Defense of Democracies and a former national security adviser to Vice President Dick Cheney. “The only real connective tissue I see is the almost preternatural isolationist impulse that he invariably seems to revert to when left to his own devices internationally — even to the point that it overrides his supposed deal making instincts.”

So, Trump has a simplistic view of our “military adventures,” but the Experts fear he is pulling our military out of places without “getting much in return.” Let us pause to consider the assumptions here: that other countries ought to pay a price for us having less of a military presence around the world. That we are “squandering American power and influence in the world.” But the legitimacy of our empire is simply taken for granted. The article says that when Trump canceled military exercises with South Korea, “senior American diplomats and military officers… privately questioned why North Korea should be given one of its key demands without having to surrender anything itself.” Left unspoken is the assumption: It is legitimate for the U.S. to menace a country on the other side of the world, practicing obliterating it. The only way we should stop doing this is if North Korea gives us something in exchange. The United States is permitted to exercise force however it likes, the rules that apply to others do not apply to ourselves. (We are permitted to have thousands of nuclear weapons, while Turkey is not. This is because we would use nuclear weapons “responsibly,” even though the U.S. is the only country to have ever used atomic bombs to obliterate two civilian populations.)

There is a sociopathic logic underneath the Expert Consensus: The U.S. should pursue its “national interest,” and should make decisions according to what benefits us and preserves “American power and influence.” Of course, if individuals operated in their relationships with one another on this logic, they would all be monstrous: If my sole consideration in deciding what you deserve from me is whether I maintain my power and influence over you, and whether it serves my interests, I will behave despicably. I have pointed out before how this pathological belief in the legitimacy of “national interest” over all other considerations resulted in mass murder during the Vietnam War. If the interests of non-Americans are treated as a matter solely for other governments to take care of, and their people have the status of insects as far as our policy-making is concerned, the results will be catastrophic and criminal. The idea that America should first and foremost look out for its “interests,” however, is a quite standard and unobjectionable position among the Experts.

Note, too, how the human costs of war are not factored into whether America “gets something” out of withdrawing military presence. Trump himself actually noted this:

“When I watch these pundits that always are trying to take a shot, I say — they say, ‘What are we getting out of it?’ You know what we’re getting out of it? We’re bringing our soldiers back home. That’s a big thing. And it’s going to probably work. But if it doesn’t work, you’re going to have people fighting like they’ve been fighting for 300 years. It’s very simple. It’s really very simple.”

This is, in and of itself, quite a reasonable thing to say. What we are getting is we are no longer spending piles of resources on sending soldiers overseas that we could be putting to better use. We are not wasting people’s lives by sending them into intractable conflicts. But the idea is that if this results in our country having any less “power and influence,” it is bad, even though we don’t actually deserve to have more power and influence than everyone else. (We have a horrendous record as a “global policeman” and have almost always prioritized our own interests over human rights and justice concerns.)

Now, this does not mean it is the case that Donald Trump is really the kind of dove he is being portrayed as. Trump has ramped up the number of American drone strikes and decreased transparency on civilian deaths from drones. Trump escalated U.S. military activity in Africa. Even as he reduces the number of troops in Syria he is sending more soldiers to support Saudi Arabia, a vicious human rights abusing dictatorship. (Note the part of the Experts’ assessment about how we should be helping our “friends” and punishing our “foes” even when our friends are human rights abusers like Israel.) I very much doubt that Donald Trump is going to meaningfully reduce the size of the gargantuan military empire or sacrifice much of our “power.”

I am not saying that Trump’s decision to pull back in Syria was sensible, and there are additional criticisms in the article of the way Trump makes decisions (e.g., erratically and based on little more than gut instinct) that are quite legitimate. But it has been interesting watching many liberals criticize Trump from the right when he deescalates military conflict. When he shows an instinct to try more diplomacy with North Korea (presumably rather than bombing it to smithereens as the U.S. did once before) he is treated as a coddler of dictators.

The behavior of Foreign Policy Experts toward Trump is a good illustration of the D.C. policy apparatus that Obama deputy national security adviser Ben Rhodes once called “the Blob.” The blob is neither liberal nor conservative, it is simply invested in maintaining the American empire in its current form. The “news analysis” in the Times today shows you what its guiding assumptions are: Our power is legitimate and must be preserved without being interrogated. It is a dangerous worldview, and one must learn to spot and see through it.