“NEOM” May Be Our Future 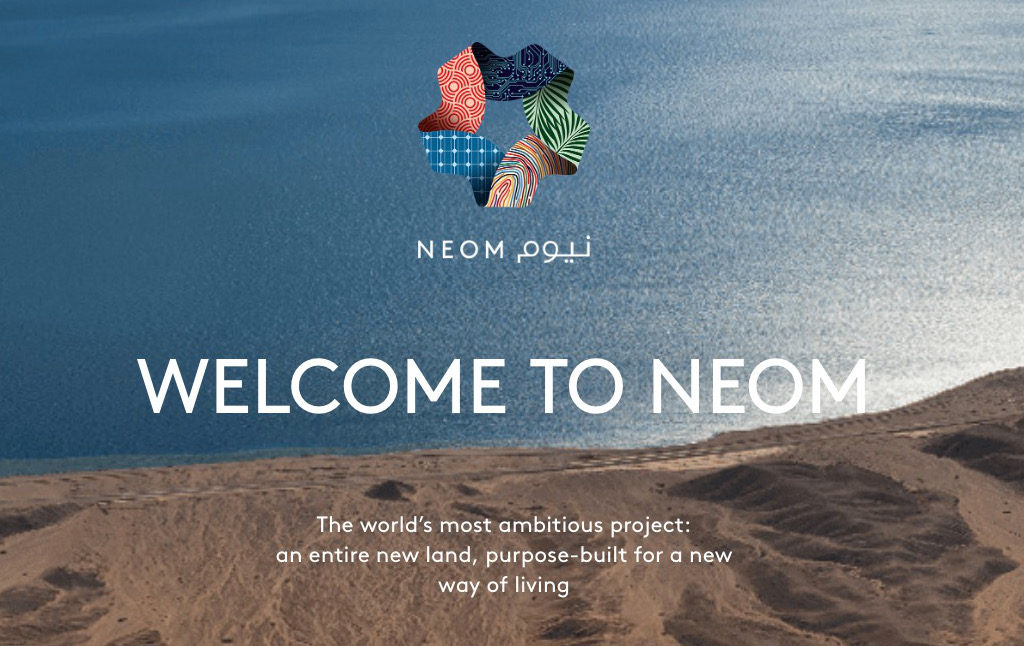 Look upon it and despair…

NEOM is, according to the promotional literature, “a new future on earth like nothing on earth.” It is a utopian megacity being built in the Saudi Arabian desert, the pet project of Crown Prince Mohammed bin Salman (MBS), previously known for such social endeavors as the famine in Yemen and the dismemberment of Jamal Khashoggi with a bone saw. According to a new Wall Street Journal report, NEOM is MBS’ vision for “a $500 billion city-state to cover 10,000 square miles of rocky desert and empty coastline to attract the ‘world’s greatest minds and best talents’ to the world’s best paying jobs in the world’s most livable city.”

NEOM does not really exist yet, but from descriptions of the plans, it sounds like something a nine-year-old might dream up. There will be robot dinosaurs and robot cage fights. There will be “a genetic-modification project to make people stronger,” and cloud seeding to make it rain in the desert. It will “supplant Silicon Valley in technology, Hollywood in entertainment and the French Riviera as a place to vacation.” The beaches will have “glow-in-the-dark sand.” One prince involved with the project said: “I don’t want any roads or pavements. We are going to have flying cars in 2030!” A giant artificial moon will be raised in the sky each night. (It is unclear why the actual existing moon will not suffice.)

Though all this may appear self-evidently ludicrous, the Saudi government is apparently pursuing the NEOM project quite seriously, pitching it to foreign investors as a new hub of global innovation that will bring Saudi Arabia into the 21st century. They have hired the Boston Consulting Group and (who else?) McKinsey, who appear to have run up very large bills telling MBS that his insane vision makes absolute perfect sense. (The Journal says there have been questions about “whether the kingdom pays Western consultants more than they’re worth.”) Descriptions of the consultants’ work can be amusing:

McKinsey details using “big data” – the use of computers to sift through volumes of information – and a “13-pillar liveability framework” to quantify how much people would like living in Neom and objectively prove it’s the world’s most livable place.

I like this first because it admits that the overused phrase “big data” just means “using computers to analyze information,” and second because it’s very McKinsey to assume that an imaginary “13-pillar liveability framework” could “objectively” show that NEOM is the world’s “most livable place.”

But while we can laugh at NEOM, it also sounds dystopian. The board has said it will be a city “where we can watch everything” and “all citizens can be tracked.” The Journal’s list of 11 NEOM features not only includes “World Class Restaurants” and “Robot Maids,” but also notes that “cameras, drones and facial-recognition technology are planned to track everyone at all times.” NEOM will be exempt from many existing Saudi laws, existing in its own special legal zone. Ostensibly, this is because the country’s cumbersome religious legal system is off-putting to investors. But the official NEOM FAQ says the “world class investment laws” that govern in NEOM will be independent from the rest of the country “in regards to taxation, customs, [and] labor laws” and courts will report directly to the king. (A custom court system has been developed by the Wall Street law firm Latham & Watkins.) Saudi Arabia is not a democracy, but it does have labor laws, and this gleaming megalopolis will be almost certainly be built by brutally exploited workers. The Journal reports that construction is “under way using thousands of foreign workers that in one section of the development were housed six to a tiny room.” The building of NEOM is also going to require a lot of human rights violations. Tens of thousands of people live in the area at present, and the plan is that “local tribes would be forcibly relocated” with up to 20,000 expelled from their homes, “many [of] whose families have inhabited the area for generations.” It is not known whether mass expulsion and housing laborers six to a room affect McKinsey’s “13 pillars of livability.”

NEOM nicely displays a number of terrible presently-existing cultural and economic tendencies. First, and most obviously, it shows how horrendous inequality and human rights abuses can be packaged as “progress.” NEOM is presented as a “sustainable” “green” city, one that will run on solar power, have good public transit, and be “progressive.” (The kingdom is so committed to creating a global “innovation hub” that draws elites from all over that they’re allowing the consumption of alcohol in NEOM.) The city will, of course, be built by poor people, who will not be able to afford to live there. (The government has intimated that those who can develop “NEOM-appropriate skills” will be allowed to remain.) Like Hudson Yards in New York, it will be a gleaming new city filled where mess, crime, and even humanity itself have essentially been abolished. (NEOM will, according to some reports, have more robots than people.)

NEOM’s promotional material speaks the language of Silicon Valley capitalism, promising a place for “disruptors” to do their “innovation.” They talk of getting Tesla and Amazon to locate there. Indeed, NEOM might be the perfect city for libertarian tech billionaires, because—like a seastead—it offers them what they really want: a lifeless playground where they are insulated from the proletariat. NEOM promises that it will be filled with all kinds of luxuries—that it will offer the best shopping, medicine, and tourist attractions. What it does not promise is that anyone will be free. They will be free to consume, of course, but laborers will likely be housed in invisible slums and political dissidents tortured.

NEOM is therefore the kind of perfect neoliberal city. It offers people progress in the form of solar panels, flying cars, and “cutting edge” architecture. It dazzles them with high-end malls and inflatable moons. But I will bet you anything that the people of NEOM will be lonely and scared, even though they are rich. The Saudi government has pitched constant omniscient surveillance as a good thing, a device to guarantee “security.” That’s not because MBS is a backward theocrat—Google CEO Eric Schmidt believes much the same, having said “If you have something that you don’t want anyone to know, maybe you shouldn’t be doing it in the first place.”

It may seem obvious to those of us who dislike dictatorship, surveillance, and inequality that life in NEOM will not, in fact, be “objectively” superior to all existing life elsewhere. But it’s important to see why some might be entranced by the idea. Certain aspects of NEOM sound tempting:

NEOM is an aspirational society that heralds the future of human civilization by offering its inhabitants an idyllic lifestyle set against a backdrop of a community founded on modern architecture, lush green spaces, quality of life, safety and technology, paired with excellent economic opportunities. NEOM will offer its residents convenient accessibility enabled by state-of-the-art urban design principles to design future-proof infrastructure. Public services will be fully automated to help provide efficient services for its residents and businesses. NEOM will also provide its residents with free facilities, such as comprehensive free Internet coverage, thereby supporting education and communication.

Efficiency! Free internet! Education! Safety! Lush green spaces! Idyllic lifestyle! Flying cars! NEOM will have plenty to lure people. And that’s what is most scary about Dystopia: If it were all bad, it would be easy to convince people not to build it. It comes about in part because it sounds good. I previously wrote about Boots Riley’s Sorry To Bother You, which imagines a dystopian corporation that promises to satisfy people’s every need by locking them into an indentured servitude contract. What I thought was brilliant about Riley’s portrayal was that it showed why the deal looked good. It wasn’t like Nineteen Eighty-Four, where everything is just unremitting misery all the time. It was a kind of “offer you can’t refuse.” You could see why people would embrace it, why it would be difficult to fight against. Of course people would be willing to sacrifice their rights, their privacy, their democracy if it meant that they were free of discomfort.

This is why we need to save Utopia from the dictators. They are able to captivate people with their promises of lush green space and flying cars, but they shouldn’t have a monopoly on fantastical visions. We on the left need to offer our own utopias, ones that are democratically-controlled and egalitarian, where there is meaningful community instead of just more technology. NEOM promises “hologram faculty” in its schools. We need to offer people real teachers, who earn good salaries under pleasant conditions.

There is a good chance that NEOM is a bit of a “Fyre Festival” in the making. The Journal says NEOM’s planning documents are “awash in leaps of faith” including the promise to have “zero work/stress- related diseases.” Engineers are apparently having trouble fulfilling the demand for glow-in-the-dark sand. Observers say “things are moving a bit more slowly than was anticipated.” That’s not surprising: When you’re a dictator, nobody calls you out on your stupid grandiose promises, and your bullshit can often be sustained for a very long time. The powerful will always be surrounded with flatterers and sycophants—this is how Elizabeth Holmes kept the Theranos dream alive long after it was clear that her promises couldn’t actually be fulfilled.

We need an anti-NEOM: future cities that aren’t conjured up by homicidal dictators, but reflect the aspirations and imaginations of ordinary people working together to fulfill their dreams. The philosophy of NEOM is the one that guides so much of our present economic development, and its glittering temptations have to be resisted. The future city will be a beautiful oasis, prosperous, and sophisticated, but it must be nothing like NEOM.