In Defense Of Throwing Food On People 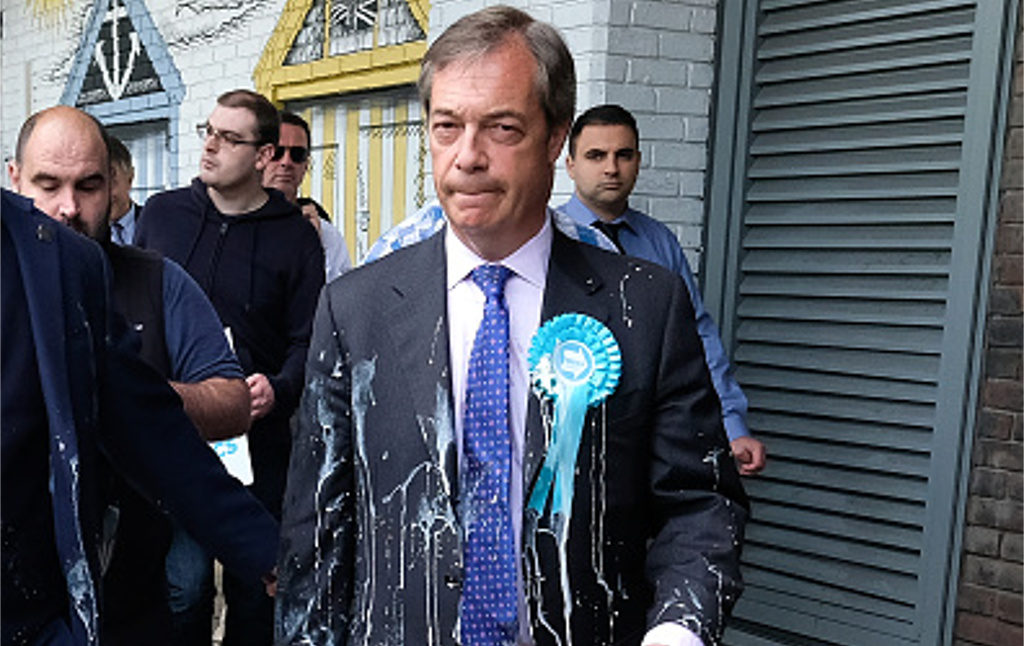 Pieing, egging, milkshakes: an effective and amusing alternative to violence…

People are very, very upset about milkshakes right now. It’s been a big week for the delicious sugary treat: Brexit Party leader and long-term anti-immigration activist Nigel Farage had one thrown over him after a speech, and both the far-right activist Tommy Robinson and the anti-PC-Youtuber-turned-political-candidate Carl Benjamin (a.k.a. Sargon of Akkad) have had milkshakes thrown at them several times during their recent public appearances. Although there’s been an unusual spike in milky confrontations this week, there have been plenty of other food-based political incidents in recent months; after the massacre of Muslims in Christchurch, New Zealand, a young man shot to viral fame for egging an Islamophobic political figure, and late last year, a girl at Florida State University threw chocolate milk on a member of a College Republicans group.

Clearly, it’s time to panic about What This Is Doing To The Discourse. When Burger King tweeted, at the height of Milkshake Panic, that they were “selling milkshakes all weekend”—definitely a sign that the multi-billion dollar company is committed to the principles of antifascism, and definitely not an attempt to use outrage as a cynical tool to shift product—people rushed out to say that the corporation was behaving irresponsibly. Lots of journalists and sensible-looking people came out to say that no, spilling creamy beverages on people you find morally abhorrent is absolutely not the right way to do things. If we tolerate milkshakes, then what next? Pancakes? Meringues? (Sometimes meringues can be quite hard, if you overcook them.) David Frum called milkshaking a “symbolic assassination” that has no place in a healthy political culture. (Gosh, imagine if Frum had deliberately helped to start a war on false pretences that resulted in 460,000 Iraqis having milkshakes thrown on them.) Tony Blair was furious, calling it “horrible and ridiculous,” saying he “really feel[s] very strongly about this” because Farage “is entitled to his point of view.” (Like Frum, Blair has a considerable amount of milk on his hands that he may want to account for before engaging in public moral indignation.)

Here’s my counterpoint: throwing food and drinks on people advocating for far-right policies is actually one of the best possible ways to deal with them. It is non-violent, with minimal collateral damage to innocent bystanders. The thrower might face legal consequence, but generally minor ones. It does not bring about all the thorny questions that violent acts against fascists do (there is a case to be made that physical assaults on far-right campaigners constitute self-defense, but at the very least, it raises some legal and practical questions whose answers will not convince everyone). In fact, it’s a wholesome alternative to harmful physical violence, the exact sort of tactic that those who reject doing injury to others should endorse. It creates media coverage and, if captured on video, can bring mockery down on the receiver. And most importantly of all, it sends a message: you are ridiculous, and I will treat you with ridicule.

The thing about the far-right is that—outside of their own safe spaces where they feel free to act as nauseating as they like—they gain power by appearing respectable. They go on shows where they know they won’t be challenged, and adapt their language to their audience. They keep the racial slurs and genocidal rhetoric amongst the people they know will approve, and to a mainstream audience they will speak instead of “serious concerns” about “different cultures.” The most prominent figures dress professionally and speak in polite tones, or at least they do when they’re aware that the cameras are on them (when they’re less conscious of the public eye, they have a tendency to slip up and do a whole bunch of crimes). They know that their true intentions are rightly repudiated by the majority of people, or at least are at the present moment; their goal, therefore, is to mainstream themselves. You do that by drawing media attention to yourself, by branding yourself as just another speaker with just another opinion. (And people like Tony Blair will agree that you are “entitled to your opinion,” even if People Disagree With It.)  and if you do this for long enough, you will be just another speaker with just another opinion. Forcibly removing nonwhite people, treating all Muslims as an existential threat, engaging in anti-Semitic conspiracy theories that pose ‘outsiders’ of all types as secretly plotting to destroy the country—these are merely just another political debate to be had, like whether garbage collection should be weekly or biweekly.

What’s key about this is that everything hinges on the branding. No-one with any mainstream platform is inviting a guy with a swastika face tattoo to their panel discussion. We humans are unfortunately fallible creatures, with brains that rely on shortcuts and “rules of thumb” more than we like to admit, and when considering an argument that is put to us, we are often too busy with our lives to sit down and diagram the argument out, figuring out if it’s logical, checking if it’s backed by empirical research from reliable sources, or considering whether there are things missing in the argument that the speaker is deliberately not drawing to your attention (like, say, whether their argument necessitates the removal of human rights from millions of people). Instead, our brain says: well, that person’s wearing a suit. They speak nicely. They didn’t say any bad words. They seem very confident. People in important positions in the media are speaking to them, and I trust their judgment. People I don’t like criticize them, and I don’t trust their judgment. You might not be wholly convinced of everything they say right away, but don’t underestimate the ability of even smart, successful people to be taken in by surface-level presentation. By mentally placing them within the realm of acceptable discourse, you have already made it possible for them to convince you.

In other words, these people are salesmen. And no one’s buying from a salesman who has milkshake all down their front.

Having food or drink on your clothes automatically makes people take you less seriously. It’s distracting. It reminds people of infants. It makes us laugh. And if your position is reliant on copying the appearance of serious people, your position is weakened. (I can attest to this, as a clumsy person who has gone to work with stains on my shirt several times in my life). An opponent of milkshaking might say: well, what if someone milkshaked a politician YOU like? Well, sure, let’s imagine that. If Bernie Sanders were milkshaked in the middle of a speech about healthcare or poverty… honestly, I’m not sure he would even notice. He has spent the last forty years talking about the same issues, and he will continue talking about them whether he has a sticky shirt or not. It would not really change anything about the way his points are received, because he has already rejected any attempts to be “clean-cut” or fit the usual mold for politicians. His politics are based in material analysis of people’s real-life conditions, which continue to exist and be a real problem in their lives both pre- and post-milkshaking. His points stand on their own merits, regardless of his physical appearance. Given how it fits into his “grumpy grandpa” vibe, I suspect a lot of people would even find it endearing.

On the other hand, a far-right provocateur bases their rhetoric in dancing around the delicate matter of what their positions actually are. They’re not a racist, see, they’ve got a person of colour on their team! They’re not saying that non-white people can’t live here, they’re just asking some difficult questions! They’re a serious person speaking for ordinary people. They’re actually more of a liberal. They’re just worried about free speech. This might sound intriguing at first glance, since it’s all being posed to you as very sensible and reasonable. However, not only does this pablum avoid dealing with the brutal truth of what the far-right’s preferred policies actually involve, but also none of this, you might notice, actually contains a route to improving anyone’s lives. Obviously anyone in the groups branded as an “enemy” will have their lives made substantially, even dangerously worse, but the white working-class cis men aren’t going to get much out of it either— their bosses and their landlords are still going to screw them over, their paycheck will still not cover their expenses, their local services will still go underfunded, and shutting down a local mosque isn’t going to change any of that. They might be told at first that their civil rights have been restored, but the history of far-right governments tells us these figures aren’t actually keen on promoting civil rights, once they’ve successfully used the pretence of caring about civil rights to get into power. We might have to take the far right seriously— in the sense that they are a serious threat to us—but their politics are not serious, and it is vital that people start to realize this.

Throwing food and drinks on these people suddenly shakes the frame— for a moment, the far-right figure is no longer serious. They are a baby in a suit. They are a figure of fun. They are pathetic. It also puts the receiver in an awkward position: if they retreat to try and clean themselves up, it delays and weakens their campaign; if they try and carry on, people will laugh at them; and if they make a fuss, they will look pathetic. The far right’s “sales pitch” depends heavily on the appearance of strength. Fascists loathe weakness—they are inviting people to be among the immortal indestructible supermen who “destroy” their enemies. When they are humiliated, they become frail human beings like the rest of us. They look weak, and their whole image is punctured and deflated. What kind of a person attempts to provoke major civil unrest, but can’t even handle being part of an impromptu performance of Bugsy Malone?

Pieing, milkshaking, and egging are fun to watch. They wound pride, but little else. The absurdity is delicious (whether strawberry or vanilla-flavored). And when a far-right figure is pelted with squishy food products, they are being treated with the exact level of respect they deserve.