People Who “Pretend” To Be Shitty Are Frequently Just Shitty 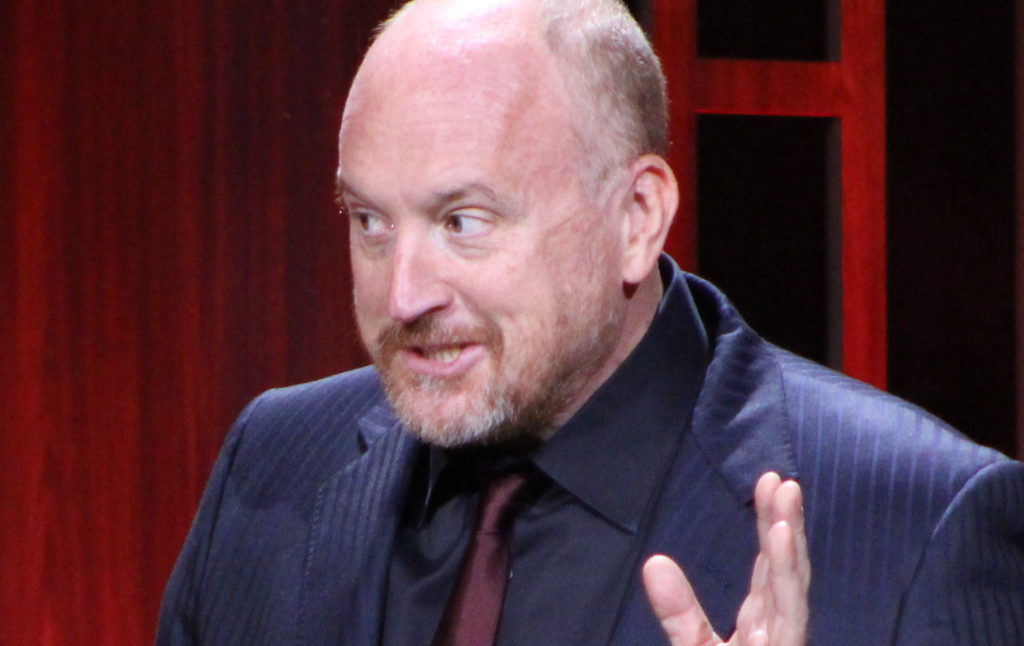 Louis C.K. was exactly the person he depicted…

It’s hard to remember now, in this century-long decade, but far back in the mist-shrouded days of 2012, Louis C.K. was one of the few male comedians officially declared woke enough to tell a funny rape joke. He was lauded for his smart, self-aware, and self-deprecating comedy, which drew a fine but obvious distinction between self and persona, the joke and the telling. He wasn’t a misogynist, he joked about misogyny; he wasn’t a racist, he was drawing attention to the ridiculousness of racism. Lots of people bought into this act. I did, too.

In retrospect, there was always something foolhardy about this rush to laud Louis C.K. and the other White Knights of the Woke, the Good Guys Who Were Not Like Other Guys. You could find them in every field: Hugo Schwyzer in feminist criticism, Junot Diaz in high literature, Joss Whedon in popular movies and TV, and Jamie Kilstein in unremarkable political podcasts. In comedy, you had Louis C.K. and Aziz Ansari. These were all men who became famous for being wiser than other men, more willing to perform acts of repentance on behalf of their fellow misogynist sinners. When C.K. was criticized after he praised the criminally unfunny Daniel Tosh, who had just made a criminally bad rape joke, C.K. backtracked, claiming his praise was issued before knowing about the rape joke, and that, as he said in a Daily Show interview, the incident had made him read more, think more, and really consider the experiences of women (while simultaneously, of course, describing feminist critics of comedy as humorless, hyper-emotional scolds).

Most of the men named above, of course, turned out to be sexual predators, or at least creeps, of varying degrees. None of them are feminists, and never were; they just became very adept at mimicking what it might sound like to be a male feminist. It was a personal brand, developed to fit a particular market niche, and to satisfy a particular hunger for feminist, diverse, and inclusive art in which everybody can participate. It’s the men, of course, and often enough the white men, who are more likely to be crowned Kings of Woke, and granted TV shows and movies and well-paid comedy specials. There’s good money to be made in pretending to be a decent person, if you know how to leverage it. But how are we supposed to react, and to think, if we fell for the act? How do we determine the difference, going forward, between shitty people who are performing shittiness as a cover, and a genuine ironic critique?

I always liked Louis C.K.’s standup, but I loved his show Louie. The surreal wackiness was, for me, the most accurate rendering of what it actually feels like to live in New York (that was, until Broad City came along, and did Louie but better). I loved Louie’s odd moments of seriousness (Parker Posey’s character’s recounting of her childhood cancer has haunted me for years). There’s an extraordinarily funny and touching episode that takes place in Afghanistan (and who else in the last decade talked about Afghanistan instead of pretending the war didn’t exist, and thought to present the country we invaded and ruined as a fundamentally human place inhabited by ordinary people, all of whom are entranced by the sight of a cute yellow duckling?) Yes, at times, Louie himself could be a bit of an asshole. But he was always relatably an asshole, in situations where we all can be jerks, and the women he dated were all real, well-written people (see especially Parker Posey’s character).

I finally stopped watching Louie in season four, after an episode where I finally noticed the misogyny behind the mask. In the episode, titled only “Model,” Louie goes to the Hamptons. After bombing a comedy gig, he meets a wealthy and gorgeous blonde model who found his gig funny for some reason. She takes him home and they have sex. During the act, he accidentally punches her in the face, knocking her unconscious. Was this meant to be funny? I’m still not sure. The scenario was unrealistic, not surreal; eyeroll-y, not edgy. The blonde model didn’t have a personality; she existed to fuck him and be punched. Maybe you were supposed to laugh at her for fucking Louie, or laugh with Louie for punching her; but either way you were definitely not supposed to laugh at the pathetically transparent fantasy of it, because that part was intended to be serious. (In a later episode of season four, “Pamela”, which I did not watch until much later, Louie attempts to rape his friend Pamela, but fails at it. Lol?)

Comedians joke about everything, except comedy. When it comes to their art, they employ a frigid joylessness that puts all caricatures of feminists to shame. Louis C.K.’s new jokes are not to be criticized. They’re angry: viciously so, directed at trans people and people with disabilities and teenagers whose friends were murdered. The pretended “accidental” nature of C.K.’s punching is gone. Now he’s just hitting us in the face.

Louis C.K.’s new comedy—which is really his old comedy, without the barrier of distance created by his persona—are regressive not just in politics, but in content. The leaked jokes from his new sets are adolescent in character. I remember edgelords at my high school making basically the same gags about the word r*tarded, racial penis size, etc, etc, yawn. But this kind of humor is adolescent for another reason, too: because it’s concerned ultimately with coolness, superiority, which is found in other, more marginalized people’s discomfort and humiliation. There’s another word for this: sociopathy. What it comes down to is a sense of permanent disengagement: There is a difference between myself and the world; I am better than the world; my self-expression matters more than others and shouldn’t face social consequences. I am furious and offended, but I have a right to my feelings; anyone who is offended by me is an over-sensitive, earnest, tryhardy loser. I am unaffected by the pain of others. I am separate from it.

Separateness is always an act, a self-delusion. We are not that different from other people (sorry, conservatives, you are not special snowflakes!) And the space between a real self and a persona is also an act, which exists in various shades of consciousness. Everyone who has ever created a persona (and most people have online) is aware of this. You can pretend all you like that your screen name is not-you: but of course it is you, a part of you, a side of you. You would not say these things if you did not think them, even if just in character. Your relationship between your self and your persona is healthy only if you honestly acknowledge what’s true and what’s not.

Not everyone who uses a persona is unaware of the scope of this distance; not everyone is faking it. That is to say, everyone with a persona is a liar, but not everyone is a bullshitter. Harry Frankfurt’s short and essential work of philosophy, On Bullshit, lays out important distinctions between liars and bullshitters. A liar knows they are lying, which means they know what the truth is, and have a certain respect for it. But a bullshitter either doesn’t know or doesn’t care, and is fundamentally unable to handle being caught. Louis C.K. is a bullshitter. His old comedy rested on a contradiction that didn’t exist: As Matt Zoller Seitz wrote in Vulture: “Anxious laughter erupted from the tension between the person that C.K. had portrayed himself as being (thoughtful, sensitive, self-interrogating) and the worst-case-scenario person he envisioned in his stand-up bits (narcissistic, lazy, vicious).” Louis C.K. was always this worst-case-scenario person, really, and the decency was a mask. And he’s mad as hell now, not just at the lost millions and the currently canceled movie called “I Love You, Daddy” (ick) but that we finally see into the bullshit, and we know for certain that he’s shit all the way down.

This is the distinction to look for, and it’s very subtle: There must be a clear, unambiguous, delineation between the artist and the mask they’re wearing, a measurable degree of daylight between author and character. This is what Junot Diaz never achieved, despite all the critics’ desire to see it. He was always his misogynist protagonist Yunior, and Yunior was always him, and you could tell because most of the women in his novels, like the blonde in the “Model” episode of Louie, lacked their own reality. Diaz’s work is bullshit—beautifully written bullshit, but nevertheless an attempt to perform awareness rather than being aware, to occlude personal sexism by pretending to critique it. Lena Dunham, who gained her fame by playing the role of the obnoxious asshole (but feminist because she’s a woman), has finally been fully understood by most people as an authentically obnoxious asshole (and not feminist, because she doesn’t actually care about women besides herself). Kevin Spacey collapsed the waveform between self and persona entirely in his recent bizarre video where he addressed his fans, in character, as Frank Underwood. He said, “Oh, sure, they’ve tried to separate us. But what we have is too strong. It’s too powerful.” By “us” he appears to have meant himself and his fans; but he might as well have meant Kevin Spacey and Frank Underwood. The waveform will always, eventually collapse; bullshit will always win out. It’s impossible to maintain an insincere act forever. You must either walk away from it, or become it completely.

Louis C.K. could have walked away; that’s the saddest thing. He could’ve really changed, instead of performing noisy public contrition (as shitty people often do) and then sneaking back into comedy through his secret, unannounced, nonconsensual sets. But imagine if he, with his large fanbase and considerable comedic talent, had decided to develop a real sense of humor about himself! At one of C.K.’s surprise appearances, he was heckled by a female audience member. During a quiet moment, she shouted, “Get your dick out!” Louis C.K. did not laugh. As the heckler described it: “He looked shell-shocked. He looked directly at me, full eye contact and said ‘WHAT!?’ I repeat myself like, ‘get your fucking dick out.’” Louis C.K., newly anointed champion of the reactionary edgelords, was not amused by an edgy and funny joke at his expense. A truly great joke, made in a genuinely risky space, since the crowd jeered and booed, and the heckler and her boyfriend were asked to leave. This is what really dangerous, boundary-pushing comedy can look like. This is what C.K. and other disgraced members of the Formerly Woke Brigade could admit, could embrace, but they’d have to do it sincerely, with actual self-honesty this time. It’s not likely that they’ll develop humility and true self-awareness, but if they tried, there’s a lot of possibility there. A lot of daylight.