If The Rule Of Law Means Anything, Kavanaugh Must Be Impeached 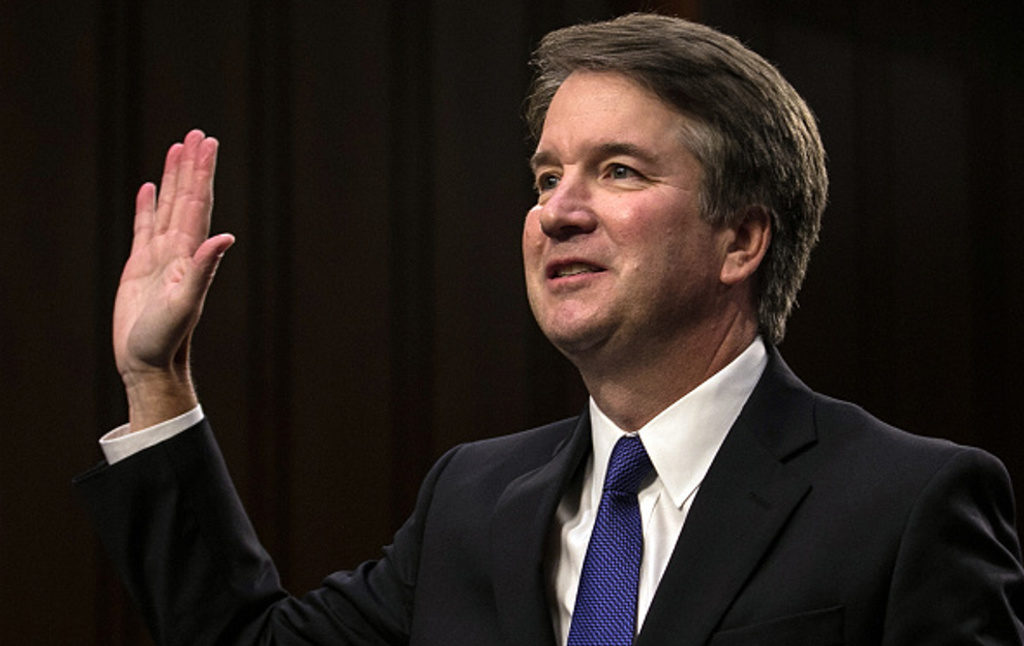 If a federal judge can get away with lying to Congress, why do we even have sworn oaths?

At this point, my position on Brett Kavanaugh’s nomination is quite simple: You cannot flagrantly violate a sworn oath and be placed on the Supreme Court. Someone who lies to the Senate in sworn testimony is not just unqualified to be a justice, but they should not be any kind of judge at all. Judges must take oaths seriously, because if they treat them as meaningless, then it’s unclear why they should mean anything to anybody. If Brett Kavanaugh lied to the Senate in his testimony, his nomination must be withdrawn, and he must be impeached and removed from office. Alger Hiss was sent to prison when he lied to Congress, Roger Clemens was prosecuted just for allegedly lying to Congress about baseball. I do not think there is much room for disagreement about this principle. Here, from the transcript:

GRASSLEY: Do you affirm that the testimony you’re about to give before the committee will be the truth, the whole truth and nothing but the truth, so help you God?

We know Brett Kavanaugh violated this solemn oath. We know this definitively. We know that his sworn testimony was riddled with both outright falsehoods and deceptive half-truths. Kavanaugh said he never attended a gathering like the one Dr. Ford described. She described a small drinking evening with Kavanaugh, Mark Judge, PJ, and at least one other boy. Kavanaugh’s attendance at such a gathering is proved by his own calendar. Kavanaugh said the witnesses Ford lists “all say it didn’t happen.” That’s false. They didn’t say that. I could go on here, but I’ve already produced 10,000 words on it and I don’t think anybody is eager for more.

I want to draw particular attention, though, to a uniquely horrible thing Kavanaugh did that has only gotten more damning since my article was released. Kavanaugh and his buddies all listed themselves as “Renate Alumni” in the yearbook, a reference to a fellow student, and one printed a nasty poem suggesting she was easy to get into bed. The woman, Renate Dolphin, was so horrified when she found out that she removed her name from a letter supporting Kavanaugh. Yet instead of groveling for forgiveness, Kavanaugh lied under oath and said the cruel reference wasn’t about sex and was being misconstrued by a dirty-minded media.

We already knew this was false, because the poem is impossible to misinterpret and classmates had already said that Kavanaugh’s group used to objectify Renate. But in a new report for the New Yorker, Jane Mayer and Ronan Farrow have produced even more evidence, including direct testimony from a classmate saying that Kavanaugh himself lewdly mocked Renate:

[T]he classmate who submitted the statement said that he heard Kavanaugh “talk about Renate many times,” and that “the impression I formed at the time from listening to these conversations where Brett Kavanaugh was present was that Renate was the girl that everyone passed around for sex.” The classmate said that “Brett Kavanaugh had made up a rhyme using the REE NATE pronunciation of Renate’s name” and sang it in the hallways on the way to class. He recalled the rhyme going, “REE NATE, REE NATE, if you want a date, can’t get one until late, and you wanna get laid, you can make it with REE NATE.” He said that, while he might not be remembering the rhyme word-for-word, “the substance is 100 percent accurate.” He added, “I thought that this was sickening at the time I heard it, and it left an indelible mark in my memory.” [Dolphin commented] “I did nothing to deserve this. There is nothing affectionate or respectful in bragging about making sexual conquests that never happened. … I would not have signed the letter if I had known about the yearbook references and this affidavit. It is heartbreaking if these guys who acted like my friends in high school were saying these nasty, false things about me behind my back.” Angela Walker, who was in Dolphin’s class at Stone Ridge, also submitted a declaration to the F.B.I… . “It’s really horrifying what they did to her,” Walker said, “it’s a terrible betrayal.” … Walker’s declaration described attending a large house party with Georgetown Prep boys, where, she wrote, “A friend from Prep warned me not to go upstairs, where the bedrooms were, cautioning me that it could be dangerous.”

I am going to assume that there are one or two honest Republicans left. To them I’d ask: How do you not find this disturbing and despicable? It’s one thing to do something like this in high school, and we can all agree that people are capable of atoning for their juvenile sins. But to lie about it in front of the whole country and under oath, as a judge, to refuse to take responsibility and instead manufacture a totally false alternate reality in which you simply wanted to celebrate this woman’s friendship… what kind of person does this? Renate Dolphin is distraught and horrified, even though she herself was a Kavanaugh supporter. And yet nobody could care less what she thinks. Ben Sasse has said that the Kavanaugh confirmation isn’t about how much the Senate cares about women. Because if it was, it would be clear that the Senate doesn’t care at all about women, certainly not Renate Dolphin, who was despicably mistreated and misled by Brett Kavanaugh. (And not, of course, Christine Ford or Deborah Ramirez, delusional pawns who are in it for the death threats.) Dolphin herself commented “I pray their daughters are never treated this way.” If the Senate confirms Kavanaugh, it will make clear that you can do this to anybody, lie about it under oath, and be appointed to one of the most powerful and respected offices in the world.

The Renate lie is not a minor issue. First, as I say, it’s a federal crime to lie to Congress, though Kavanaugh’s supporters seem to scoff about this and not take it seriously for reasons I can’t understand. Second, it’s directly relevant to Ford’s accusation, because Kavanaugh insisted that he wasn’t the kind of person who would have humiliated and objectified a woman, when he was. Third, do we have any standards for the “integrity of character” a judge should show? The kind of person who is willing to lie under oath rather than admit a bad thing they did? The kind of person who treats a woman this way?

I think Democrats are handling this whole thing rather badly. They are focusing a lot on the weakness of the FBI investigation into Kavanaugh. And the investigation is a complete travesty. Deborah Ramirez submitted 20 names of potential corroborating witnesses to the agency, and hardly any of them seem to have been contacted (a respected theologian who went to Yale with Ramirez also says he is “100 percent” certain he heard about it at the time). But I do not think a focus on the investigation is especially compelling. Democrats said they wanted a delay and an investigation, Republicans gave them a delay and an investigation, now Democrats say they didn’t mean a brief and shoddy investigation. Arguing about the investigation’s scope obscures the clear message Democrats should be pushing to the public: Kavanaugh lied under oath about important factual matters related to a serious allegation. His nomination must be withdrawn, and he must be impeached. Republicans can muddy an argument about the FBI investigation; you say it’s shoddy, we say it’s thorough. It is far more difficult for them to respond to the very clear evidence of Kavanaugh’s false and misleading testimony. Ask them how they justify the vicious lie about Renate. The lie about the calendar, the lie about witness statements. And what about all the evasions? Remember, the oath is to tell the whole truth. When asked about the “ralphing club,” Kavanaugh said it was because of his sensitive stomach. Was that the whole truth? Of course not. He may well have a sensitive stomach, and have to put ketchup on his spaghetti. But there’s more to it, and if we want honest judges, we need people who don’t deliberately conceal important bits of the truth. Why do we even have sworn oaths, under penalty of perjury, if violating those oaths has no consequence?

There is simply no way for any marginally honest person to support Kavanaugh’s confirmation. If he is placed on the bench, sworn oaths will be meaningless and the rule of law will be a joke.