What Goes Up In Flames 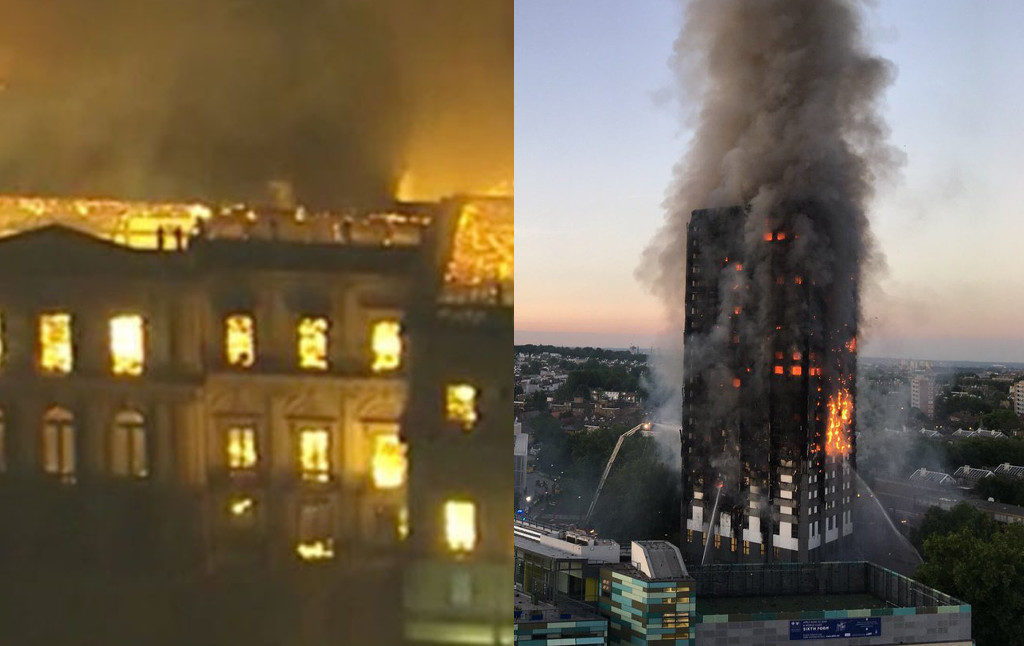 Last summer, a residential tower block in London caught fire, killing 72 people, mostly working-class people and people of color. Before the fire, the residents had warned that due to poor maintenance and a lack of safety precautions, a “catastrophic event” like a fire was a serious possibility. Their pleas for greater investment in their safety were ignored, and the catastrophic event they foresaw occurred exactly as they had predicted it. The fire was a direct consequence of austerity: Basic fire protection measures were rejected as not economically viable.

Last night, the Brazilian National Museum caught fire. The museum contained “priceless artifacts spanning 11,000 years” and “more than 20 million pieces of history, including Egyptian mummies and historic artwork, may have been destroyed.” A giant inferno consumed the entire museum, and many fear that everything housed in it has been destroyed. Fighting the fire was made more difficult by the fact that several nearby hydrants didn’t work.

The loss to Brazilian history and science has already been described as “incalculable.” But the loss was not unpredictable. Two months ago, a Brazilian newspaper reported that budget cuts were destroying the museum building. The oldest museum in Brazil, with its largest collection of archaeological artifacts, the institution had been completely neglected by the government. Now, “many of the walls are peeling, there are exposed electrical wires, and widespread poor conservation” and on the Museum’s 200th anniversary, 10 of its 30 exhibition halls were closed. Thanks to the persistent failure to update the museum, attendance had been in decline for years.

Here’s one more story about fire: In 2016, independent journalist Steve Neavling reported on the shocking impact of fire on the city of Detroit. Tens of thousands of fires had raged in the city over the past three years, further contributing to the emptying out of city blocks. The fires were made worse by the lack of funding available for fire services: “Hundreds of broken fire hydrants hampered firefighting efforts, causing fires to burn longer and spread to adjacent structures” and “about 70% of the structure fires were suspicious, but the Fire Department only investigated a fraction of them.” Neavling writes of the direct link between city budget cuts and human tragedy:

The city’s ability to extinguish fires was dramatically diminished in the summer of 2012, when then-Mayor Dave Bing cut the Fire Department’s budget by 20%, shutting down a third of the fire companies and severely reducing the amount of money to fix aging, long-neglected trucks, engines and equipment. The consequences were brutal. Response times decreased by 25%, and fire rigs broke down en route to hundreds of fires. Faulty equipment wasn’t fixed, and firefighters were ordered off the hydraulic ladders because they hadn’t been checked for safety in years. Deaths significantly increased in areas where fire stations were closed. For example, 13 people died in northeast Detroit after two engine companies were cut in June 2012. Before the cuts, there was only one fire-related death in that area between Jan. 1, 2010 and June 1, 2012. In January 2013, a 71-year-old man with disabilities died in a house fire because firefighters couldn’t get there in time. Less than a mile away was Engine 38, which had been closed six months earlier. The next closest engine company, #52, was 3 miles away.

You can tell a lot about a society’s priorities from fires. In the 21st century, massive urban fires are (thankfully) quite rare, and the “Great Fires” that form part of the legend of cities like London, Chicago, and New Orleans are far in the past. Building fires are much easier to prevent, thanks to sprinkler systems and fire-resistant materials, and they are much easier for well-equipped firefighters to stop. Where there are major fires, then, they are symptoms of social neglect: places that investment hasn’t been made, places where nobody has bothered to protect, because the governments of those places do not care. The poor residents of a London tower block, even when they were begging the city council to keep them safe, were ignored. The scientists and researchers who begged the Brazilian government for adequate support to maintain their building were rebuffed. The residents and firefighters of Detroit, who have watched their city burn, are nonexistent to the Michigan suburbanites who could easily fund adequate fire services for the city.

In the fires, we see how power works: who has it, and who doesn’t. We see what a “neoliberal” age has wrought: the decimation of investment in public research institutions, the erosion of public housing, the gutting of basic government services. It’s the same around the world: a ruthless economic logic that puts “efficiency” above human beings destroys those things that are “priceless,” like precious artifacts or the lives of working people.

In the 1970s, the poor neighborhoods of New York City suffered from a series of devastating fires. In one decade:

Seeven census tracts in the Bronx lost more than 97 percent of their buildings to fire and abandonment. Forty-four tracts lost more than half. The results were staggering — blocks and blocks of rubble.

As Joe Flood documents in The Fires, the fires were not random. They were a result of city policy. Cost-benefit analysis had determined that fire stations in these areas were not economically beneficial to the city, and that “they could close busy fire companies in fire-prone areas without much impact on overall service.”

For the city, according to Flood, closing fire stations meant “saving money, focusing budget cuts in politically weak areas and supposedly not losing much fire protection.” It was obvious that the city was losing fire protection, because tenements were burning to the ground. But as one mayoral aide reputedly told a firefighter: “Well you can aways look on the bright side. The city got rid of a million and a half undesirables.”

In the 21st century, fires like the one that occurred last night in Rio are totally unnecessary. They come from policy choices, and those choices are shaped by social priorities. We need a world that has its priorities straight, that is willing to keep safe its “economically unproductive assets” like poor people’s houses and a country’s historical memory.