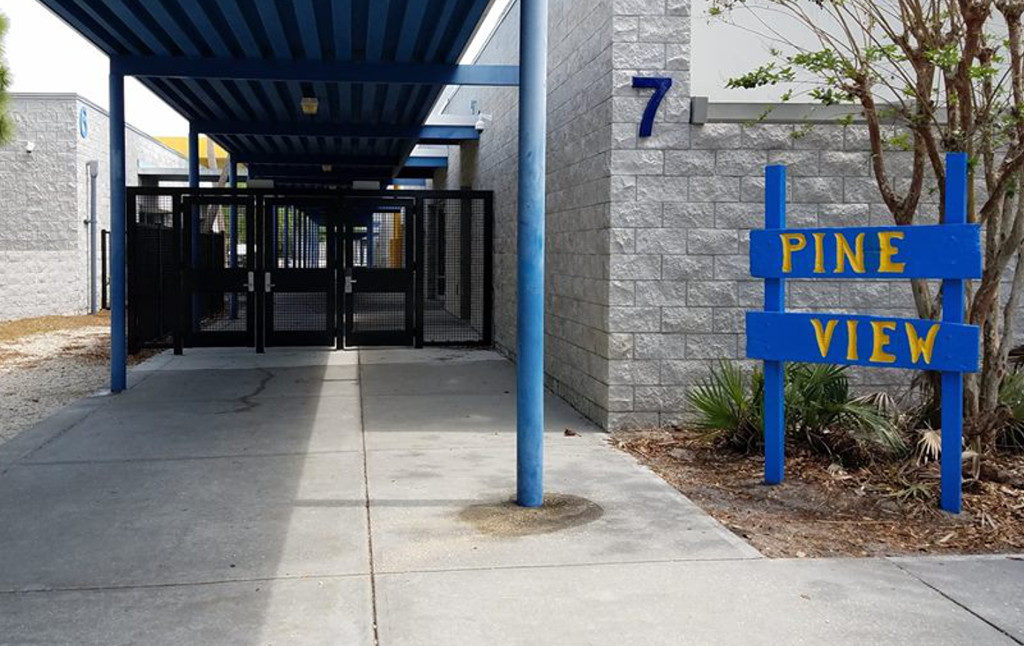 Putting bars around the school seems so logical, yet inches us toward dystopia…

I knew my school would put up prison bars sooner or later. It had been too free to last. I haven’t been back in 10 years, but I wasn’t shocked when a friend showed me photos of what it looks like now: All around our once wide-open campus, there are bars and metal security gates. In my day, you could walk on and off as you pleased (and we did). No locked doors could keep you out; it was like a college campus. Now, you have to pass through one of the few official entrances, no doubt manned by security personnel.

I doubt there was any public opposition to putting iron bars around the campus. In fact, I’m sure it was applauded: In my hometown of Sarasota, the school board has frantically been spending millions on “long-overdue” security measures at all of its schools, making sure nobody can just walk into a school and every visitor is tracked and registered. This just makes sense, post-Parkland. At Sarasota High School, there have been long debates about how to close off the last remaining way that the campus can be freely accessed from the street: It’s an intolerable risk, everyone seems to think, not to have a barricade.

I don’t share this instinct. I am horrified by it, actually. The fact that everyone thinks it perfectly reasonable to build a gigantic cage around the school, that they think this is so sensible and necessary that nobody could possibly see anything wrong with it, suggests to me a world gone completely insane. I look at the black barriers around my own Pine View School and I see what is quite obviously a dystopia. We were free, and now the students are behind bars. We used to wander wherever we chose. Now you need to get permission. How can anyone look at that and not be disturbed by it? How could anyone watch them building the barriers and not scream “Stop! What are you doing? This is a school, not a fortress!”

Of course, to the extent anyone was disturbed to watch the gates go up initially, their feelings will subside soon enough. Human beings can get used to pretty much anything, which is one of the reasons terrible things happen and nobody notices they’re abnormal. And soon there will be generations of students who don’t even remember when it wasn’t caged. They won’t even be able to imagine such a thing. A world without the security doors would be inconceivable. In fact, the above photos probably don’t look nearly as disturbing to you as they do to me. You can’t see what I see, because you never saw it differently. I see a path that used to be traveled freely, a place I spent nearly 10 years wandering around doing whatever I felt like, hideously deformed with bars and gates. You just see a fence, like any other fence. You might even think I sound demented.

I don’t know. It’s very hard to convey what this means to me without sounding crazy, and that’s what worries me. Increased security measures are so rational that they seem inevitable. School shootings are so awful that we’d be crazy not to put in metal detectors and hire an army of guards and give the teachers guns and build a giant wall. And yet to me it feels so, so wrong. I can’t easily argue against it, but I feel it just mustn’t be allowed to happen. It’s partly because I experienced incredible freedom when I was young, and I know there is nothing like it, and I can’t accept that future students won’t get to have it, because that will mean the world is getting worse, and we have to stop the world from getting worse. Surely the gates are just temporary. Surely we’re all committed to tearing them down eventually, at least. But I know they’re not. Once those fences go up, they never, ever come down. Security measures only ever heighten. They do not get relaxed. 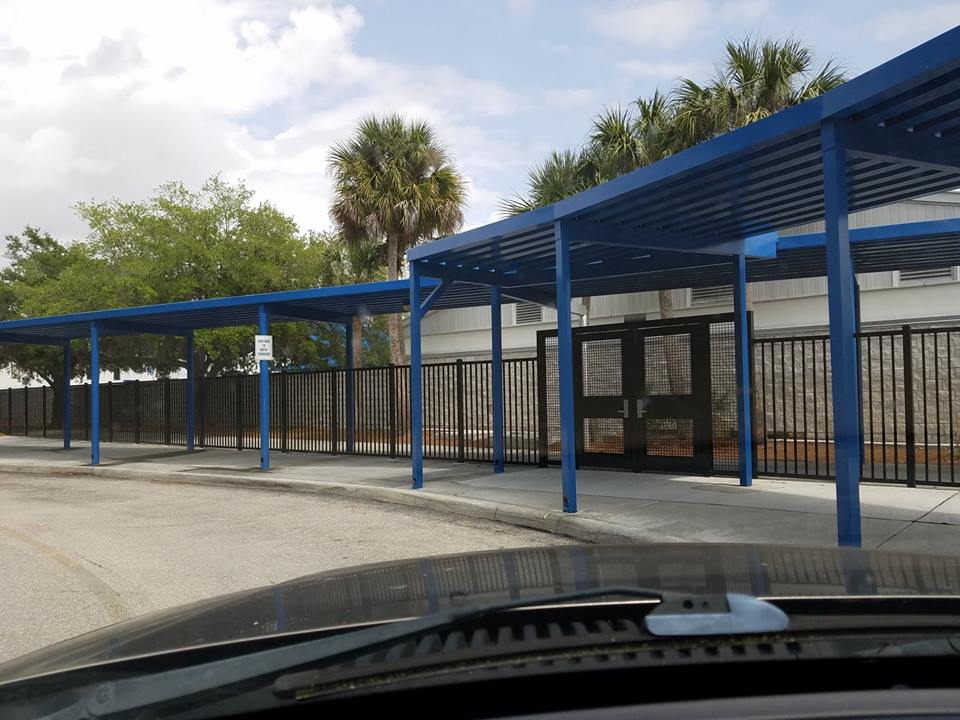 I should mention that I do also think this is a stupid response to the problem of shootings. We are all very familiar with mass shootings, because they are so horrifying and seem to occur so often. As a factual matter, however, students in public schools are not really at much risk. In the 20 years since Columbine, there have been half a dozen shootings with multiple fatalities at elementary, middle, and high schools in the United States. That’s half a dozen too many, obviously. But they are not a problem that justifies turning every school in the country into an armed compound. In fact, many of them could have been prevented if we were committed to sensible gun policy and had a school system that was capable of detecting and dealing with troubled students. The Parkland shooter had been reported to police dozens and dozens of times, and had openly made threats to shoot up the school. That was where the failure was, and that’s what needs to be fixed. The Sandy Hook shooter should never have had access to heavy weaponry. By the time these people get to the schoolhouse, we’ve already failed.

In fact, many security measures on campus are futile. The only way short of an outright total surveillance state to solve these problems is through prevention. The security gates on Pine View’s campus, for example, are utterly useless. Handguns fit in backpacks, and many of these shootings are conducted by students. Unless you commit to putting every student’s possessions through a metal detector every morning (as some schools do), a Parkland situation is still perfectly plausible. (Also, Pine View’s fence might make students less secure. It’s easy for a determined perpetrator to shimmy over, but having the whole place surrounded by a cage, with only a few points of exit, makes it far more difficult for students to flee in an emergency.)

I honestly don’t think the building of gates comes out of a sober assessment of how to actually prevent school shootings. It’s purely reactive: Something horrible happened, thus we must have new security. But another thing that disturbs me is that in the “cost-benefit” calculus, “freedom” appears essentially nowhere. The old phrase is that whoever gives up a lot of liberty for a bit of security deserves neither. But it so often feels like people will give up all of their liberty for even the appearance of security. Hardly anyone cares about the little unquantifiable things, like how it felt to be a student at a school that respected its pupils enough to give them complete liberty.

The sociologist Max Weber is associated with the idea of the “iron cage” of rationality: There is a kind of logic that imprisons us and determines our thinking. Capitalism creates an ideological iron cage: If something cannot justify itself economically, it does not have value. Security is similar: There’s no way to argue against locking down the schools; it seems somehow like it must occur because it’s just perfectly rational. In a newspaper article about Sarasota High School’s lock-down measures, I saw an administrator say something like “Well, a school has to be able to keep track of everyone who enters and exits campus.” The fact that that statement isn’t controversial, that it seems obvious: That’s the iron cage. Does a school have to be able to keep track of everyone? Couldn’t everyone just come and go? A teacher has to take attendance, of course. But it’s strange how many people can accept as an unquestionable assumption something that was never true until recently: that everyone must be kept track of, that nothing must be unknown. All of this seems to happen without anybody really willing it: Reason travels a path that leads inescapably to the security state.

Yet as we pursue this inexorable logic further and further, we destroy so much that was valuable. All schools become detention facilities patrolled by armed guards. Everyone is registered. You must sign in at the front desk, you must present ID. You must enter through the single entrance, you may not enter after hours without permission. All of this seems so perfectly logical, so difficult to question. Anyone who objects is irrational. Impractical. They don’t take safety seriously. Soon, objections fade, logic prevails, and eventually it becomes impossible even to see the thick black bars of our iron cage.