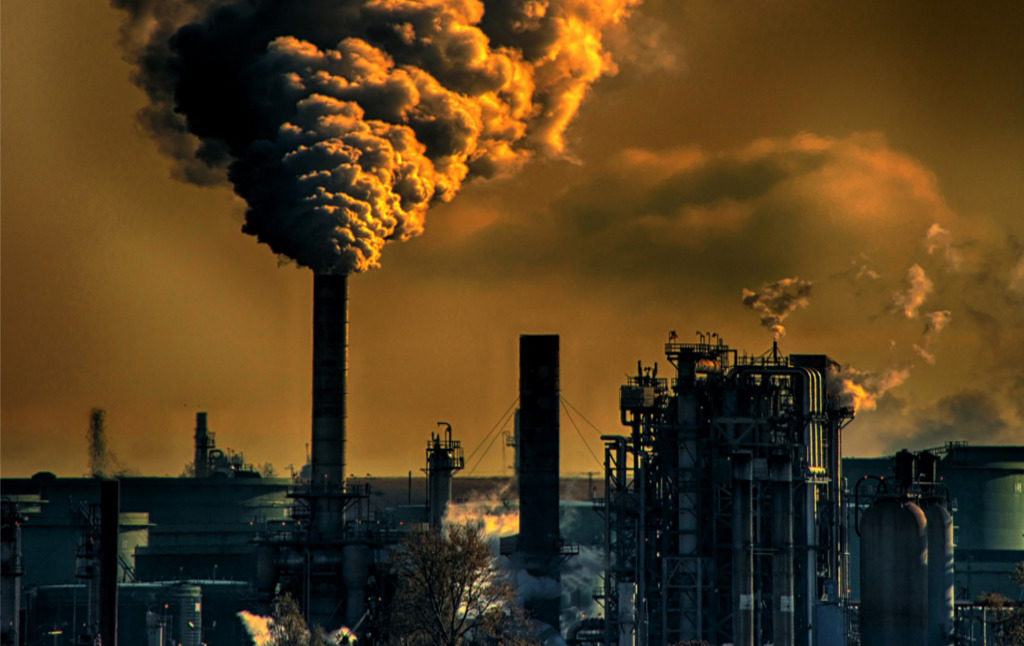 On August 22nd, 2018, here is what the front page of the New York Times looked like: 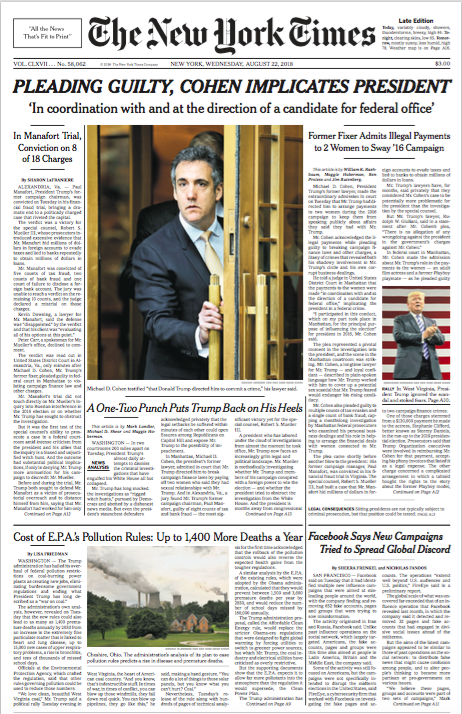 As you can see, nearly all of it was dedicated to the guilty plea of Michael Cohen, including a large photo of Cohen himself looking bewildered. Now, since Cohen’s guilty plea implicates the president in a corruption scandal, it’s quite important news. And yet I can’t help but think that there’s something odd about the way this front page is arranged. It doesn’t seem strange that the Michael Cohen story would be treated as extremely significant. It does seem strange to me that it’s treated as more significant than the story directly below it: The Trump administration’s rollback of pollution regulations could kill 1,400 people per year. Here is how that story begins:

The Trump administration has hailed its overhaul of federal pollution restrictions on coal-burning power plants as creating new jobs, eliminating burdensome government regulations and ending what President Trump has long described as a “war on coal.” The administration’s own analysis, however, revealed on Tuesday that the new rules could also lead to as many as 1,400 premature deaths annually by 2030 from an increase in the extremely fine particulate matter that is linked to heart and lung disease, up to 15,000 new cases of upper respiratory problems, a rise in bronchitis, and tens of thousands of missed school days.

I am not an expert on the subject and haven’t dived into the research. But according to the Times, this estimate is coming from the EPA itself. And if it’s right, that dry description doesn’t even begin to capture what it is we’re talking about here. “Tens of thousands of missed school days” is the result, but the actual situation is thousands of sick children. Tens of thousands of dead people every decade. People suffering horribly with respiratory problems. Waking up coughing, going to bed coughing, struggling to pay for their medical care, becoming exhausted, despondent, and miserable. The human toll being discussed here is vast. Death-wise, it’s a 9/11 every other year. If this estimate is correct, the Trump administration is proposing a regulatory change that would amount to mass murder.

I often find the media’s priorities strange and indefensible. As I have pointed out before, there is a hierarchy of victims, with attention to deaths reflecting irrational prejudices. But it’s also true that the suffering of humans and other animals, which is so awful that it should be our first priority to eliminate it, often passes by without comment. Climate change, for instance, poses an existential threat to the human species and could lead to catastrophic suffering on a global scale. Significant action has to be taken immediately if we want to preserve a habitable planet. That seems like it should be at the top of the newspaper every single day! And yet if you watch the 2016 presidential debates, how much time was dedicated to pressing the candidates on what they would do to ensure that we don’t accidentally destroy the earth? (Hardly any.)

The media is supposedly “liberal,” but any sensible observer knows that their bias is far more toward “what people want to hear about” than any particular principled political belief. The drama of the Trump administration is fascinating. It’s like popcorn. So many hilarious characters. Omarosa! Cohen! Gorka! Scaramucci! Don, Jr.! It’s hard to peel your eyes from. But meanwhile, further down the page, policies are being enacted that will cause people’s deaths. However important corruption is, murder is far more significant. And with a thousand different attention-grabbing and outrageous things happening at once, it’s important to apportion one’s personal attention and outrage on the basis of human consequences: What is actually going to make the most difference to people’s lives? Those are the things we should talk about the most, and those are the things we should spend the most time trying to stop. Did the president engage in a sleazy and probably illicit payoff scheme to silence women he had slept with? Probably. But the president is also allowing polluters to kill children, and I know which story I think belongs at the top of the page.