The Joys of Solidarity 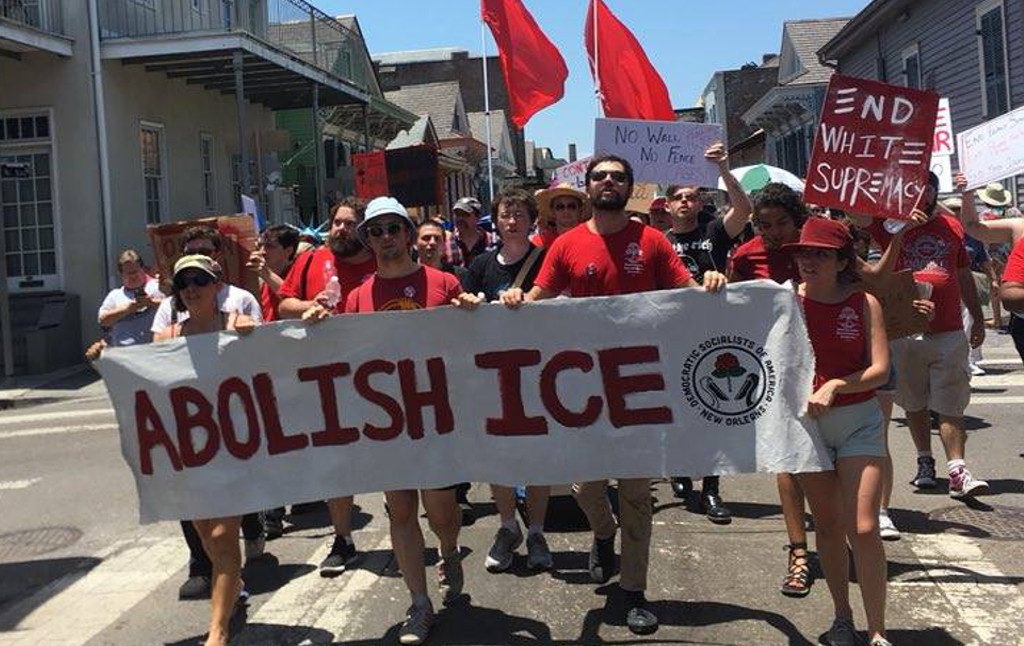 Why gathering in protest is so important, powerful, and spiritually nourishing…

For a person who runs a “current affairs” magazine, I often know embarrassingly little about what is going on in my immediate vicinity. I’m often preoccupied with the national and international at the expense of the local. So I did not realize, until I bumped into it while wandering through my neighborhood, that New Orleans was going to have a demonstration against Trump’s immigration policies yesterday. I came upon it entirely by surprise. Which, in retrospect, was entirely the best way to find it. There is nothing quite like walking alone through a city and suddenly finding yourself surrounded by thousands of sympathetic comrades and friends, demonstrating for an important humanitarian cause.

At first I only saw a trickle of people. I noticed someone carrying a sign, heading in the direction of the Louis Armstrong Park. The sign had a picture of the Statue of Liberty, who looked disappointed. Then more people, more signs, all converging on the park and filing through the gates. Excitedly, I parked my bike and followed them in to see what was happening.

I wish I could let you live the next moment as I experienced it. In New Orleans during the summer, festivals are usually the only occasions when large groups of people assemble together in public. On a sweltering day, in the off-season, by the French Quarter, I expected there wouldn’t be more than a few dozen people out protesting Donald Trump’s border policies. But as I turned into Congo Square, I saw that the gathering was vast. Hundreds and hundreds of people, of every race, age, and gender, were there. The homemade signs were powerful, clear, and personal. (I like “I thought all lives mattered” as a rejoinder to the right’s selective compassion, and enjoyed the uniquely New Orleans experience of seeing “Babies in Cakes, Not Jails” printed on a Mardi Gras umbrella.) As I walked up, I could hear everybody singing the old civil rights song “Keep Your Eyes on the Prize.” It was hard not to tear up a little bit, hearing that song, thinking about its history, and feeling like we were trying to keep alive the tradition of those who marched singing it before we did.

I met up with the New Orleans contingent of the Democratic Socialists of America. They’re good people, doing important work. (For example, Louisiana’s criminal justice system is infamously merciless to people who get caught up in it, and the DSA offers to change people’s broken tail lights so that they don’t end up in an unpleasant encounter with police after being stopped on a flimsy pretext.) The DSA is the most promising mass-membership political organization in the country; they combine a radical commitment to eliminating the role of profit and exploitation in society with a pragmatic understanding of the need to actually accomplish real political objectives that make people’s lives better.

Soon, the entire group began its march down through the French Quarter, toward Jackson Square. The police had locked the gates of Square, apparently because they worried there was a non-zero chance that if a large group of lefties assembled there, they’d start thinking about pulling down the statue of Andrew Jackson that stands in the center. (From a purely probabilistic perspective, that fear is not incorrect.) But it didn’t matter: We flooded into Decatur Street and onto the steps leading to the Mississippi River, and undocumented immigrants told their stories to the enthusiastic crowd.

Single marches do not bring walls crashing down: A few hours on a Saturday afternoon was not going to boot Trump from office, give Stephen Miller a moral wake-up call, or change the composition of the Supreme Court. And most of the onlookers in the French Quarter were bemused tourists, who hadn’t expected a thousand angry leftists to come thundering across Bourbon Street. And yet Saturday’s demonstration, along with its counterparts across the country, was important. That’s because atrocities should not pass by unremarked upon. Public opinion does matter, and the findings of the Milgram Experiment show that whether people resist authority is determined to a great extent by whether anyone around them is willing to do so. If even a small group speaks up, it can cause others to begin to express feelings that they would have suppressed if they had thought nobody agreed with them. Marches and demonstrations are a way of “bringing dissent out into the open,” of legitimizing a stance so that other people can feel comfortable saying it aloud. Demonstrations are not purely “symbolic”: They have a very important function in keeping the public’s eye on what matters.

Actions like Saturday’s marches also have an important function for their participants. It’s a lonely world out there, and people are isolated and depressed. It’s so, so important not to be desperate alone, to find people who can remind you that you’re sane, and to whom you can talk honestly. I was overwhelmed with joy at seeing so many people whose values I shared, working together to further those values. As communities and civic life have been eroded, and ordinary people are shut out from the political process, one can often feel completely disconnected from meaningful collective action. It’s crucial to find other people who care about the things that ought to be cared about, and to feel as if one is part of an actual movement.

I should talk briefly about “Abolish ICE,” which was probably the dominant slogan of the march. Some have suggested that Abolish ICE is “politically unwise,” because it’s so radical and will horrify Middle America. I’ve seen plenty of arguments that “open borders” is becoming the dominant position on the left too quickly, and that it is going to put an upper limit on how successful the democratic socialists and the Democratic Party itself can be electorally.

I don’t really have this view of politics, which is the view that the politically optimal strategy is to be in the “center” so that you can capture the most votes. Instead, I tend to believe that, in the long run, the soundest political approach is to: (1) figure out what you think is the morally correct position and (2) campaign for that thing as hard as you can, being honest, understanding, and compassionate towards those who don’t yet hold your beliefs. I think Bernie Sanders in 2016, and Jeremy Corbyn’s success in the U.K., have showed that what matters a lot more than “how far to the left” you are is how well you succeed in presenting the case for left values.

I happen to think that restrictive immigration policies are indefensible. I am an immigrant to the United States, and I don’t see why anyone in the world shouldn’t be able to do what I did. To me, putting up walls is a violation of basic human freedom. It’s as if one found a land of milk and honey, with plenty for everyone, and instead of inviting people to come and share in its bounties, one stationed armed guards to make sure that the only people who got to enjoy it were the ones who arrived first. (Actually, for the analogy to work exactly, those who “found” the land would first wipe out its native inhabitants before putting up the walls.) The U.S. had a highly permissive immigration policy for most of its history, and it’s that policy that turned the country into the dazzlingly diverse multiethnic populace that makes it a special place.

There are, of course, practical considerations to immigration policy, and I’m not suggesting that “national security” is entirely an illegitimate interest (although it depends entirely what we mean by that vacuous phrase). But while I don’t think the left should run electoral campaigns on “open borders,” I do think we should try to honestly and compellingly present the case for a far less restrictive immigration policy than the one we have now, one that does not see “illegal entry” as something blameworthy in and of itself, and which does not police workplaces and neighborhoods to investigate legal status. If an immigrant commits a crime, that’s what we have criminal laws for. But in general, I find nationalist policies very hard to defend on elementary moral grounds, and I think honesty requires us to be frank about that.

Abolishing ICE isn’t that radical. Even some ICE agents have suggested it would be a good idea! ICE is not the Border Patrol, and only operates deep within the country, so abolishing ICE has little to do with “policing the border.” Besides, we got along without the agency for 95% of the country’s history. The real question is: What would Abolishing ICE actually mean? That’s important, because you could abolish it in a technical sense but preserve all of its functions, and simply move them to another wing of the federal bureaucracy. That would be useless symbolism. That means we have to think substantively about what exact kind of immigration policy we want, and how the government should be organized to implement it. It means going beyond the slogan in order to ask serious questions about how exactly our immigration system ought to look. (My colleague Brianna Rennix has some ideas on this!)

But these are problems we will solve. We’ll solve them together, in joy and solidarity, outside in the boiling heat, marching toward a better world and keeping our eyes on the prize.

Photo from the New Orleans DSA.