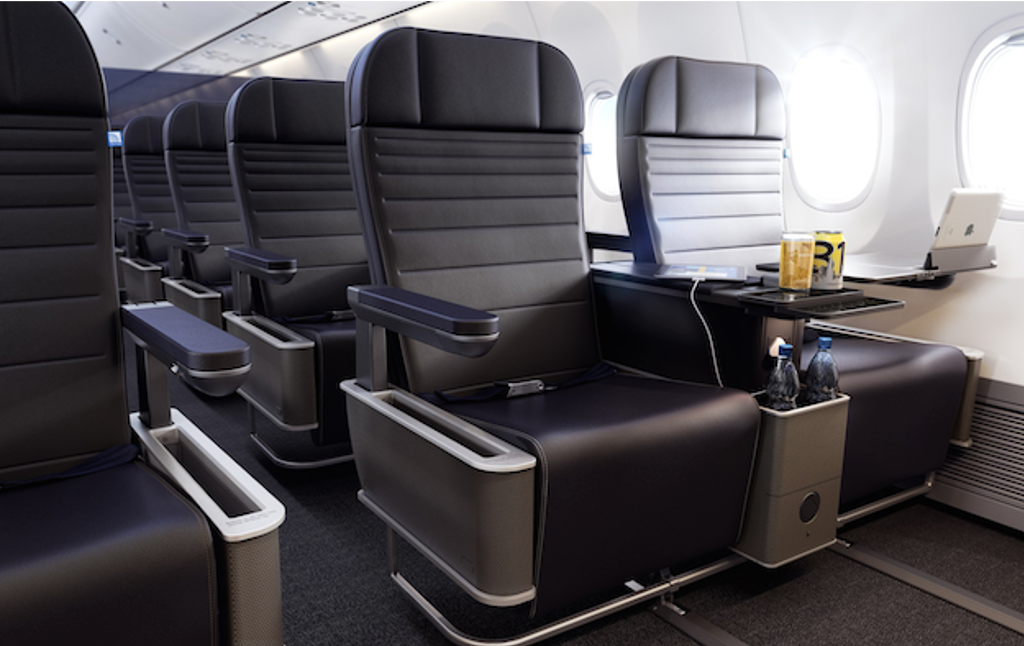 Until this week, I had never flown first class before. But on my way back from North Carolina, I was given an unexpected upgrade to Seat 1F, and treated to the full premium air travel experience. Given that first class seats seem to cost about three times as much as economy seats, I suppose I expected a fair bit of luxury. As it turns out, these are—as far as I could observe—the perks you are granted:

If there were other differences, I did not notice them. I have been told that you are also given “free alcohol.” The alcohol itself isn’t special, since you can purchase it in coach, so the perk is more accurately characterized as “the illusion of free alcohol” or “alcohol priced into your ticket rather than bought on the plane.”

On the whole, an underwhelming list. It is not immediately clear why you would pay $500 or more for this assemblage of tiny extras. But there is one more thing you get when you fly first class, a feature they don’t list on the airline’s website: you get to know that you are in first class. A distinction is made between you, the first-class passenger, and the steerage passengers, who file past you one by one seeing exactly who you are and where you are sitting. (This is not always the case, but even when everyone else doesn’t parade past you, the fundamental aspect remains, namely the knowledge of having separated yourself from the majority of your fellow travelers.)

First class tickets are obviously not “worth it” in the sense of providing anything that can reasonably be called value for money. The seats aren’t actually much more conducive to rest or spinal health, having a glass instead of a cup isn’t exactly decadent luxury, and even the expanded range of available biscuits doesn’t alter the fact that airline snacks are airline snacks. There are two reasons, then, why one might purchase a first-class ticket. First, one is so stupendously wealthy that no price is too high to pay for even small improvements, meaning that if an airline charged $500 to passengers who wanted tea instead of coffee, you wouldn’t think twice about paying it if tea was what you wanted. The second explanation is that the improvements aren’t what’s being bought. What is being bought is status.

You might not get much of material worth in first class, but in another way you get something of very high value indeed. You get to feel like Quite An Important Person. I certainly did. In fact, I was very uncomfortable. I was taken aback when the flight attendant called me by my name. I thought I must have done something wrong, or that there was some kind of problem. Perhaps I had misread my ticket and it said Seat 15 instead of Seat 1F. (That would be a stupid mistake, but I can be an uncommonly stupid person. For my outbound flight, I had accidentally showed up at the airport two days early after forgetting which day I was supposed to be going, despite having a printed itinerary showing the correct date in large bold text.) She just wanted to see if I would care for a pre-flight drink, though. I was too flabbergasted to say yes. (I found first class’s extra politeness creepy, because it was so obviously a lie. “Little do you know that I am a fraud who actually deserves the Polite Coach Grimace rather than the Exuberant First Class Smile,” I thought to myself.)

I could see the appeal of being in first class. Distinction is powerful: it doesn’t take much to feel superior, and just being designated superior can suffiice. That seems to be the lesson from the experiment where kids are told that eye color is important in telling how good a person is, and immediately start treating each other as if eye color matters. You don’t need actual luxury to feel like you’re better off, you just need someone else to compare yourself with. If there was an airline that offered extra biscuits and slightly more legroom, but charged three times as much for every ticket, nobody would buy tickets on that airline. People only pay to be in the first-class section because there is a coach section behind it.

There’s an economic concept for this, the “snob effect,” where goods have a higher value not because they have any practical use value but because they are distinguished as being a level above other goods. For these commodities, price is value, and what you are receiving for your money is not so much an actual product as the feeling of being a person able to spend a lot of money on something. Sometimes this consumption is conspicuous, as with designer clothes, where you get to show other people what you can afford to buy. You can purchase the envy of your lessers (or, more probably, the feeling among your lessers that you are an ostentatious douche). A man buys a $2 million Wu Tang Clan album not because it is such a good Wu Tang Clan album that it is worth $2 million, but because he wants to show us all that he is wealthy enough to be stupid without consequence.

It is not news that the most expensive things are not always the best or highest quality things. Sometimes food at expensive restaurants is nowhere near as good as food from a corner taco truck, and a Lexus is just a pricier Toyota. Status is so powerful that it can seemingly defy the law of supply and demand; raising a price of a good may make more people want it. (Current Affairs, by the way, offers a “high income” subscription option, which doesn’t make the magazine any better or causes it to arrive on time, but does remind you that you are successful. People do choose it sometimes, although the charitable—and I think correct—explanation is they’re just generous and want to support our high-quality, not-for-profit, advertising-free periodical.)

It’s not necessarily the case that everyone in first class just wants to be in a thing called “first class.” The first rationale I offered might be the one that predominates: they’re just so rich that, to them, extra legroom is worth the average annual income of Burundi. In practice, purchasing a first class ticket probably comes from a mixture of status-seeking and need-for-comfort-at-all-costs. Both of these are distasteful, though. The urge to be above others is one of the ugliest we have, and there’s no good defense for the gross wealth inequality that gives some people so much money that they can pay astonishing sums for trivially small benefits.

Class distinctions are never displayed more literally than in air travel, where people are actually divided up into units by the amount of money they have. This process occurs everywhere, but it’s usually a bit more subtle, and planes/trains are the only places left where Marxist social organization is so openly adhered to. (“Will you be flying bourgeoisie or proletarian today, madam?”) I prefer my airlines a bit more egalitarian, of course. My favorite is Southwest, for two reasons. First, since they are based in Texas they always serve Dr. Pepper. And second, they board through a “free for all” system (free for all not as in free to all, but as in every man for himself). You get a number, you line up, and you file in by your number and take whichever available seat you like. Of course, nothing is truly fair in this world of ours, and you can still bribe your way to a better number, but it’s the closest thing we have so far to a “left-wing” airline.

If you haven’t flown first class before, I have good news: it’s disappointing! But the fact that flying first class is stupid doesn’t mean the status hierarchies and wealth inequality that cause it are benign. We can dream of a world in which everyone gets full access to the biscuit basket and the forward restroom, and society will never have reached its final destination until we fully abolish the class system.