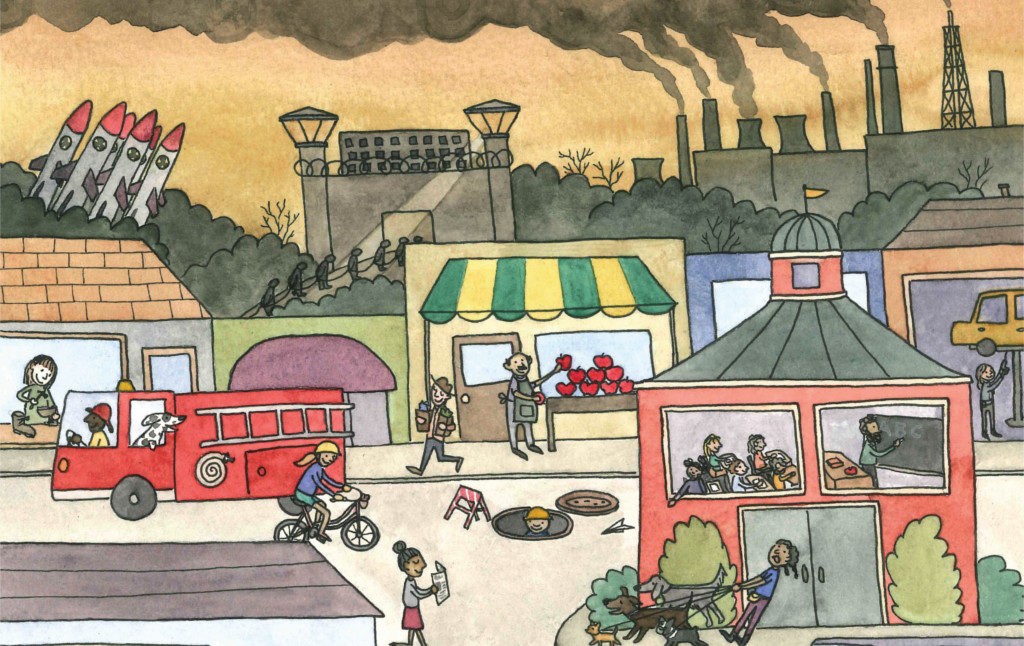 I had never lived in an apartment with a balcony before. I always lived on the first floor. If I stood at my window, I would be just above the eye-level of pedestrians. Being inside gave me roughly the same perspective on the street as being outside, except through a pane of glass. But the balcony changed all that: I am now three stories above the pavement, and I can look down and examine everybody’s business.

I didn’t think this would change my worldview, but it did. Just as going up in a plane turns people into ants, and inspires reflection on the smallness of human achievement and the pettiness of civilizational conflict, moving to the third floor turned my city into Busytown. The resulting observations were both charming and discouraging: I am now somewhat more hopeless about the possibility of solving existential global problems.

Richard Scarry’s Busytown books show happy anthropomorphic animals going about their daily lives in a small town. The animals are disproportionately cats, pigs, rabbits, dogs, and foxes. Each has a role in the town: a pig runs the drug store, a raccoon owns the hardware store, a bear teaches schoolchildren, a goat fills potholes. (Then there is Lowly the Worm, who seems to do very little of anything.) The differing careers among the species even inspired an academic article about class divides in Busytown, John Levi-Martin’s “What Do Animals Do All Day: The division of labor, class bodies, and totemic thinking in the popular imagination,” Poetics 27 (2000) pp. 195-231. An excerpt:

It is clear that foxes in particular, and predators in general, are most likely to be in positions of command (see Table 2). The mayor is a fox, the airplane pilot is a fox, etc… Pigs and raccoons tend to be at the bottom of any authority relation. Owls are unusual in that they are totally disconnected from authority relations – evidently, they are residual craftsmen not yet proletarianized by industrialization.. That the use of the pig legitimizes class stigmatization is seen in the disproportionate number of foolish mishaps that pigs cause in this work…. Fully 16% of the pigs are involved in a mishap of some other, far more than any other species, and unlike the other species, they are the cause of the mishap 75% of the time…. These interpretive glosses are supported by our findings, but can we make sense of the scheme as a whole? Let us arrange the major classifications in a Durkheimian schema…Fig. 4 plots this order in a three-dimensional totemic space, in which the relative positions of the species provide a key both to their hierarchical relations and what Evans-Pritchard (1950 [1940]: 109f) called ‘social distance’: “the distance between groups of persons in a social system, expressed in terms of values”. The order of animals is stretched into a U-shape. Animals at the bottom of the U may be considered to be dominated, animals on top dominating. As we shall see, while there is a logic to the horizontal placement of species, it is not to be interpreted as a single latent dimension. The dominated animals are raccoon, bug/skunk, pig, and mouse. Note that Table 5 demonstrates that the vertical dimension here correlates quite well with the percent of the species that are professionals, who have authority, and who have skilled jobs…

And so on. But to those of us who have not had the good fortune to end up as sociologists, the Busytown books are far less theoretically rich. They are simply ways of introducing children to words and concepts: the pilot flies the plane, the firefighter fights the fires, the butcher chops the other animals into delicious chunks… Yes, the butcher in Busytown is a pig who cheerfully vends sausages and bacon, a phenomenon that has inspired another work of theoretical Scarry-analysis, “Animal cannibalism in the beloved world of Richard Scarry.” It points out that the Busytown pigs never seem to question where their pork dishes come from, and this ostensibly egalitarian world of pigs, dogs, and cats may in fact be a sinister Orwellian society in which “some animals are more equal than others.”

But leaving aside—for the moment—the political dimensions of Busytown, I’d like to return to my balcony. Looking out from it, I get roughly the same perspective on my city as one gets reading a Scarry book. And so I see a similar, though slightly darker, version of urban life. The UPS man delivers the packages. The beer truck unloads the beer. The flower seller opens the flower shop. The police officer frisks a youth. The drunk couple shout at each other. And what strikes you, over time, is how strange “routine” feels. Just as when you say a word over and over it loses all meaning and becomes bizarre, watching the butcher, the baker, and the candlestick maker from 30 feet up (the perspective of a god, though a minor one), one begins to see the rhythm rather than the people. And the rhythm is so consistent, even if there are minor variations (the package on this doorstep rather than that, gleeful drunks rather than angry drunks), that it almost feels as if we have no free will at all, that everything runs as a sort of clockwork.

Then, of course, something unusual happens, and people become people again. A parade, a block party, an accident. If you watched long enough, though, those too would begin to seem routine. And every time this feeling comes over me, this sense of all human lives wandering along narrow bounded paths through space and time, I get very worried. When you look at it from above, people do seem so much like individuals, with particular defined sets of roles. And I begin to wonder how all of these people, going “day in, day out” through their quiet rhythm, could ever come together to solve a huge collective problem?

How, I wonder, could they ever even begin to address something so monumental in its implications as climate change? How are they going to eliminate nuclear weapons? Politics seem to take place at the very fringes of this world, and its consequences seem to just happen to people. For a person whose day is defined by a routine—get up, bathe, eat, open the flower shop, sell the flowers, close the flower shop, go have a drink with some people, go home, eat, sleep—where is there time to be “political”? How could the people of Busytown ever come together to stop something that threatened them all, when their lives are so defined by their particular identities? Busytown seems to have far more community spirit than most places human beings inhabit, but it’s still difficult to know how they would fix a vast problem that required all of their effort. In Busytown we are all workers, and workers’ lives are defined by their work:

Everyone is a worker

How many workers are there

What do these workers do? …

Up on the third floor, watching Busytown go to work, you do see something encouraging: so much of human life is pleasant and ordinary. Everything seems right with the world. But the experience of watching the world go by is like the experience of reading Scarry’s books: everything looks idyllic at first, but there’s plenty going on that you’re not seeing. You’re not seeing the vast system of prisons that are extracting a substantial portion of the population. You’re not seeing the militarized borders keeping people out. You’re not seeing the slaughterhouses, the war zones, the landfills, the graveyards. You see public life, and public life looks fine. But in any of the houses, there could be a deeply lonely person. A child could be growing up in fear, a grandparent could be slowly losing their faculties. All of this is part of life, but nobody can bear to think about it, so it doesn’t show up in Busytown.

Every perspective lies, but each lie is different. Look only at the world’s miseries and you miss its ecstasies. Look only from the plane or the balcony, and you miss what it’s like on the ground. Look at earth from a distance, and we’re an insignificant pale blue dot. And I suppose what anyone who wants to understand the world should do is try to figure out how it looks from every angle. Examining the world from above let me understand the flow of life better, and induced troubling thoughts about the difficulty of breaking out of daily cycles when it becomes necessary. But I am also trying to remember to climb down, to see myself as a person in the world rather than a weary detached observer. Nobody in Busytown sees themselves from above, in the third person, the way the books portray them. And they can’t, if they ever want to get any work done.

How Can America Stop Creating Lauren Boeberts?  Against Liberalism What Do We Owe Afghanistan? Why the Chair of the Lancet’s COVID-19 Commission Thinks The US Government Is Preventing a Real Investigation Into the Pandemic  “Forget They Are an Animal”