Could YOU Be A New York Times Opinion Columnist? 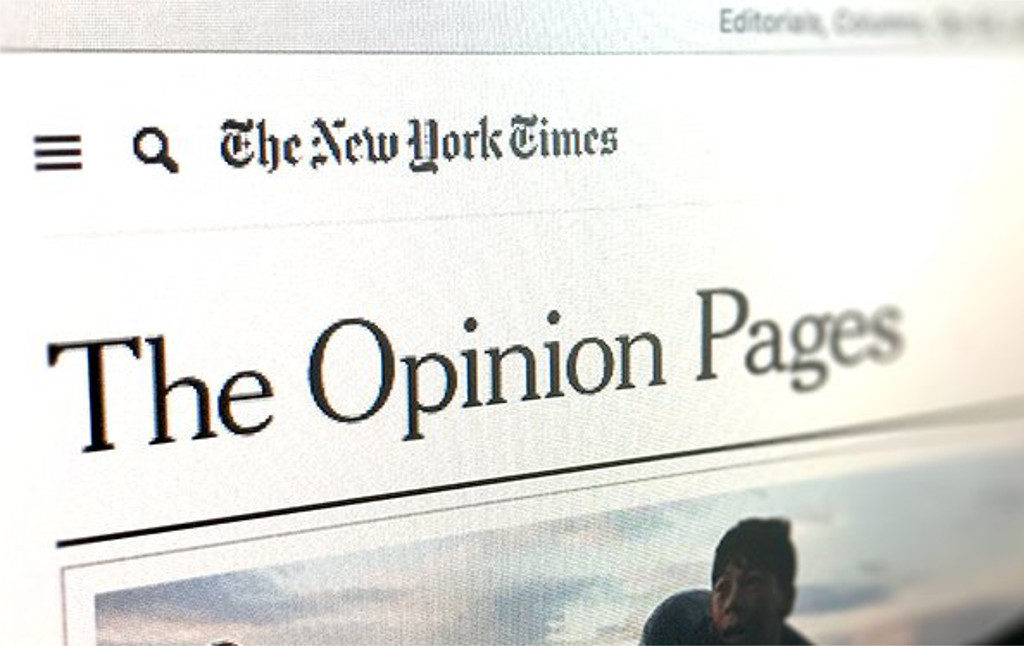 A test to see whether you’ve got what it takes…

Thank you for your interest in contributing to the New York Times opinion page. Before we get started, we just need to run a quick background check. To start, please open your latest Pottery Barn catalog to page 15. If you don’t get the Pottery Barn catalog, there’s no need to continue filling out this application: you’re obviously not a regular reader of the New York Times. If you do have the Pottery Barn catalog, and your complexion falls on the darker side of the “birchbark beige” ottoman featured on page 15, please, please, PLEASE feel free to complete this application. The New York Times is an equal opportunity environment. At our last Shell Oil-sponsored fundraising soiree, we even distributed #blacklivesmatter tote bags! (But when you don’t hear from us, please don’t take it personally, okay? We’re simply swamped with applicants these days. We promise that all applicants of color were totally, briefly considered.)

1. Which of the following statements best exemplifies your current thinking on climate change?

A. Climate change is very real and extremely dangerous. Simply asking corporations to “do better” won’t work, because it’ll always be more profitable to destroy the environment than to save it. Capitalism got us into this mess; capitalism can’t get us out of it. We need to immediately restructure the entire edifice of energy production and consumption.

B. I firmly believe that if Hillary Clinton were president, she would have launched her #greengrab #initiative by now, encouraging corporate takeovers of third world countries to prevent those charmingly backward folks from burning their trash. But instead, we have Tr*mp. Since no one can do anything about the environment except for the chief executive of the United States government, there’s nothing to do except write snarky columns about What Might Have Been and wallow in despair. #shewarnedus #feminism

C. While some critics have claimed that my background in classical philology doesn’t entitle me to learned opinions on scientific subjects, I must respectfully disagree. It is indeed correct that I have never read a single paper on the topic of climate change, but I do have a vague notion of the existence of a “controversy.” Obviously, universities are secretly quashing all research that contradicts established scientific consensus purely on the grounds of free-speech denialism. I know this because of my pre-existing prejudices, and also my tidy grant from the Koch Foundation.

D. Climate change doesn’t exist. It’s a myth created by Hollywood to cover up George Soros’ cannibalism ring. Every “green activist” is an FBI plant, unless it’s the CIA I hate this week.

2. What is your opinion of free speech on our nation’s campuses? Do you believe that millennials are hypersensitive snowflakes, gormless grade-grubbers, or dangerous anti-free speech fanatics?

A. Obviously, college students say some silly things sometimes, but in general I believe the panic over college kids and free speech is an overblown conservative rumor. The real threat to free speech on college campuses is the precariousness of adjunct professorships. When you have zero job security, the economic risks of speaking your mind are simply too high. A unionized professorial class, allied with other staff members and students, can do a great deal to improve economic conditions for all.

B. Now, I’m a feminist, but I secretly feel political correctness has gone too far. When I informed a noted black academic that the term “intersectionality” excludes white women, I was forced to quit Facebook and Twitter. In fact, the blowback was so horrific, I had to do a six-week mindfulness course instead of my usual four. Now that I’m back from my digital detox, I’d really like to write a weekly column about how soul-cleansing it is to break up with social media, especially for academics who have gotten SO sensitive these days. (Also, I wish they’d stop dragging me, it really interferes with my self-actualization.)

C. The degradation of the ivory tower cannot be overstated. I’ve heard that students have walked out of courses such as “Glories of the Classical Canon” just because their professors spoke disparagingly of the “non-literature” of other cultures. Post-modernism has destroyed our respect for tradition. Suddenly, merely teaching Western civilization is tantamount to a war crime. I’ve considering resigning my honorary Harvard professorship in disgust – I won’t, but I could.

D. Marxist Freemasons have teamed up with a race of alien shapeshifting leopard people to indoctrinate our youth. It’s obvious. If you study these extreme close-up photos of pillars on college campuses, you’ll see what I mean.

3. At the New York Times, we care a great deal about cultural trends. How would you best describe your personal style, and what’s your general take on fashion?

A. I wear whatever I want, and I don’t give a shit about other people’s clothes as long as they seem like they’re sincerely trying to express themselves. I’ll always laugh at a high fashion failure, but I’ll never judge a poor person for wearing an unflattering outfit.

B. If the people in my rapidly gentrifying neighborhood are to be believed, my style can best be described as “basic bitch.” Ok, FINE, so you can’t always tell me apart from the wallpaper. But I personally consider my look classic; and on that basis, I feel justified in judging other women’s clothes. When a young woman looks too comfortable, or an older woman looks too sexy, I take great pleasure in telling them to stop. That’s what feminism means to me: constantly obsessing over other women’s micro-decisions while men continue to hold nearly all social, political, and economic power.

C. Every day, I dress in a tidy three-piece suit and a bowtie from Earl’s of London. That’s the outfit of a gentleman. You’ll find me wearing it even in 110-degree heat. (The summers have grown hotter…a curious phenomenon. Perhaps it’s simply how one feels the heat as one ages.) In any weather and any season, I promise to constantly proffer my opinion of youths in saggy pants.

D. Over my Metal Gear Solid t-shirt, I wear chainmail painted with the Confederate flag. It’s…very heavy actually. My take on fashion is that restaurants should have the right to refuse service to anyone, but I shouldn’t get kicked out just because my chainmail “smells like rust and unwashed dogs.”

4. Last question: are you currently friends with any Nazis?

A. Oh my god, no. Absolutely not. Was that a serious question?

B. Hmmm. Define “friends.” Is it “friendship” if all you do is secretly DM each other racist memes?

C. By refusing to be friends with people just because they advocate the mass murder of minorities, perhaps YOU are the true bigot, sir!

D. Nazis were the best men at my wedding! Also, I have three swastika tattoos, only two of which are on my neck.

Mostly As: I suppose you’re well-read, articulate, and passionate, but you’re absolutely the wrong fit for the New York Times. You see, we tried all that anti-capitalist rah-rah back in the 60s, but ultimately we were too self-obsessed, and our anti-authoritarianism was co-opted to sell sodas and t-shirts. Someday, millennial, when you have a vacation house and a retirement fund of your own, you’ll understand.

Wait, you can’t afford your rent, or even a car? Well, that’s clearly your own fault. Buck up, buttercup. Life is hard. Also, please stop calling us “out-of-touch sellouts.” It makes us feel bad.

Mostly Bs: Finally, a feminist! You might just be the voice of your generation, because you’re saying everything we want to hear while not really challenging white supremacy and patriarchal authority. In fact, you never say “patriarchy” without a winsome wink and a joke about how your fellow feminists have gone too far! If you just keep writing loopy solipsistic essays about your personal life and which billionaires you find the most inspirational, well, young lady, you may just be set for life.

Mostly Cs: Finally, a compassionate conservative! You’re just the right mix of qualities: we can take you to Upper East Side dinner parties and disagree with you cordially over the cordial. Just make sure you keep the racist dog whistling in the appropriate frequency range. Overt displays of white supremacy make us queasy, and then it’s hard to digest our apéritifs.

Mostly Ds: You know, we really appreciate your down-home authenticity. Actually, we’d love to visit you and write a flattering profile that glosses over your outright Nazism, but unfortunately, you’re just a little—direct—to be a columnist for the New York Times. Don’t despair: we hear Breitbart is hiring. In four years, give us a call. We’ll probably enjoy taking you on as an opinion vlogger when we’ve pivoted even harder to video, and also further to the right.